In the ninth update for Endzone it is possible for the first time not only to hunt animals in the wild, but also to catch them and keep them in pastures implemented for this purpose. Four completely new species of animals now roam the radioactive forests of Endzone, offering a much wider range of food than just their meat. In addition, the settler behavior has been reworked again and allows to understand their actions much easier and to better integrate them into the natural flow of the game. Players should not only notice a boost in efficiency, but also be "rewarded" by a logical settlement structure, leading to a well balanced settlement. 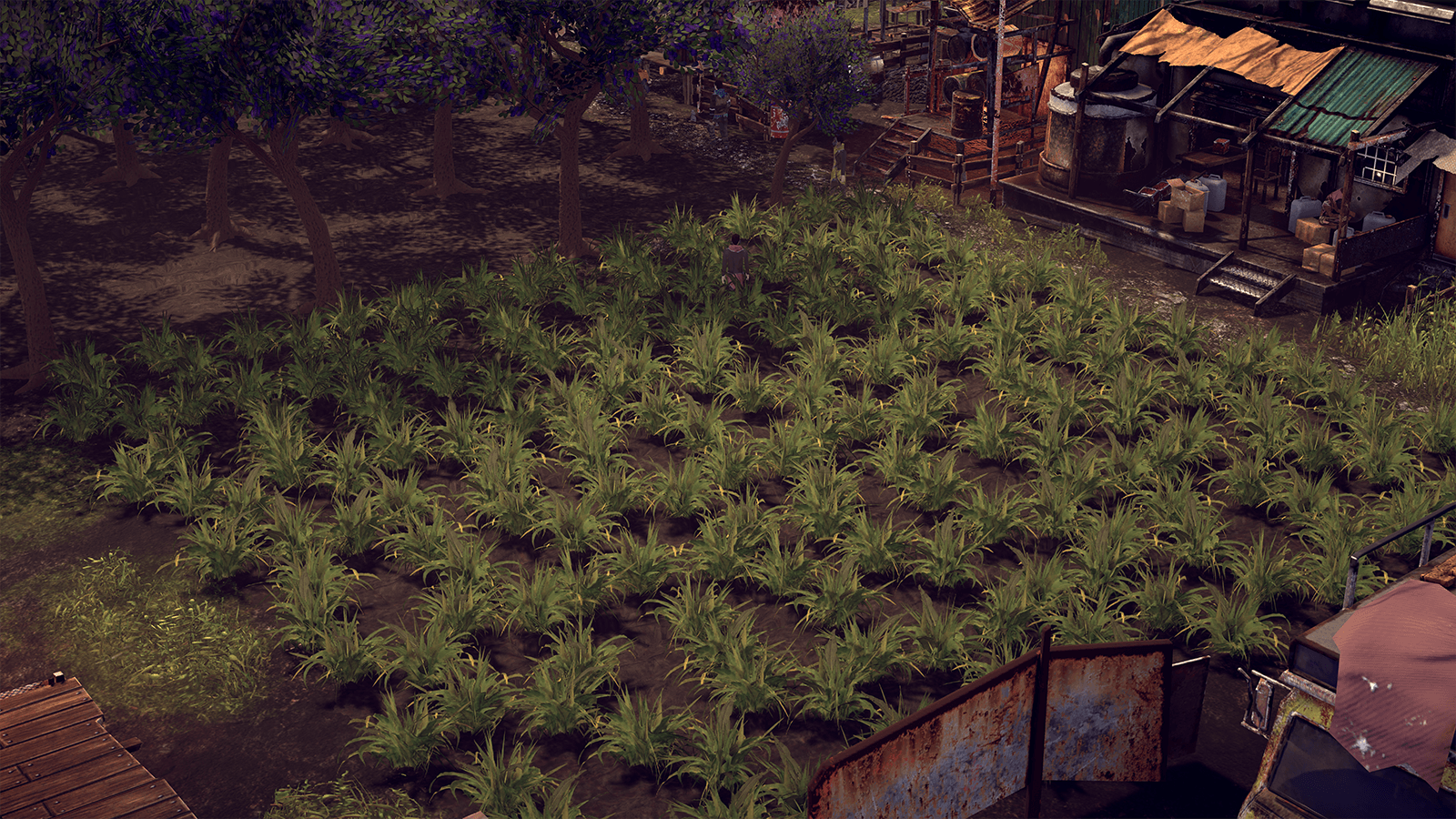 Black Salsify on a cultivated field

Through the pasture, roaming animals can now finally be kept and raised in the Endzone. The hunter is now able not only to hunt animals, but also to capture them as needed and store them in the Hunter's Lodge until a Herder picks them up and brings them to the pasture.
Held animals naturally need a certain amount of food and water to survive and reproduce on the pasture.
Animals can be slaughtered inside the pasture and thus be processed into meat. How many animals are to be slaughtered can be set in the building UI of the pasture. In order to avoid having to catch animals again, a minimum limit can be set for the number of animals to be slaughtered. Buffalo, goats and chickens can also provide eggs and milk for further processing in addition to meat.
Individual animal species take up different amounts of space on a pasture, which results in the following maximum numbers for keeping animals:


Reproduction time and yield differ for individual animal species similarly to different seeds in the fields and therefore require the player to find an optimal balance. In addition to catching them in the wild, Traders can now also bring a new type of animal if the reputation is high enough, so keep an eye out for that! 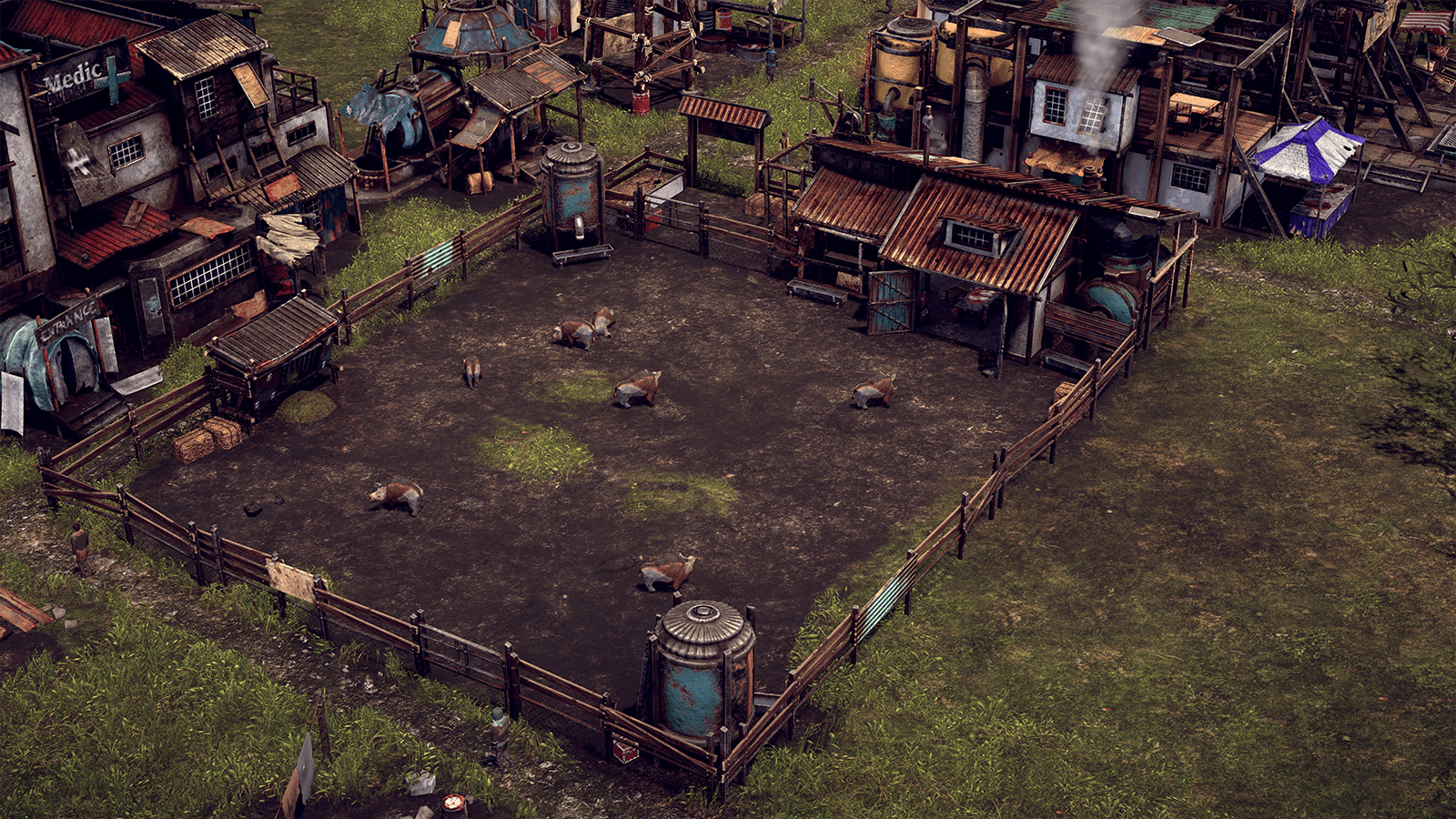 The pasture and some boars 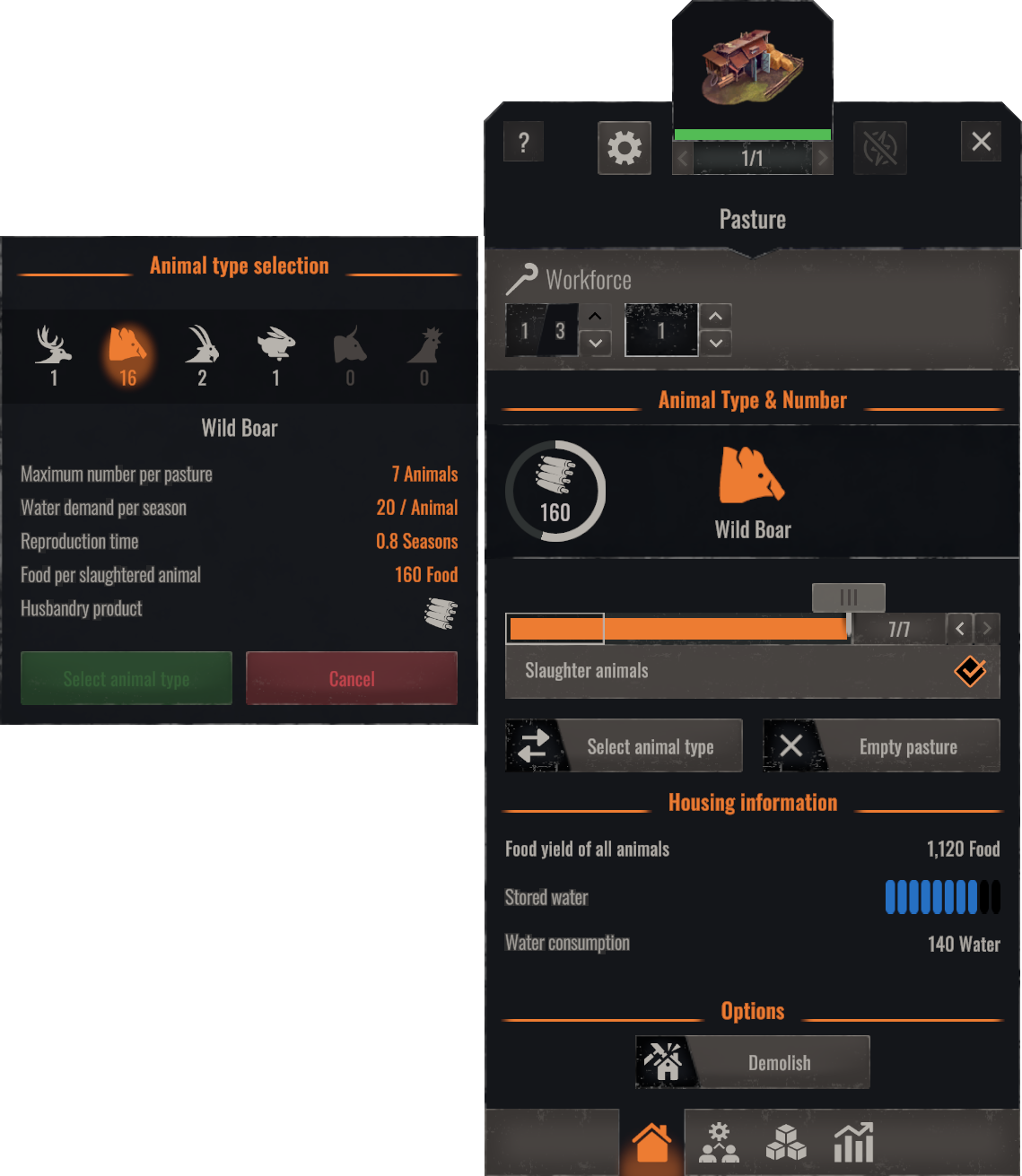 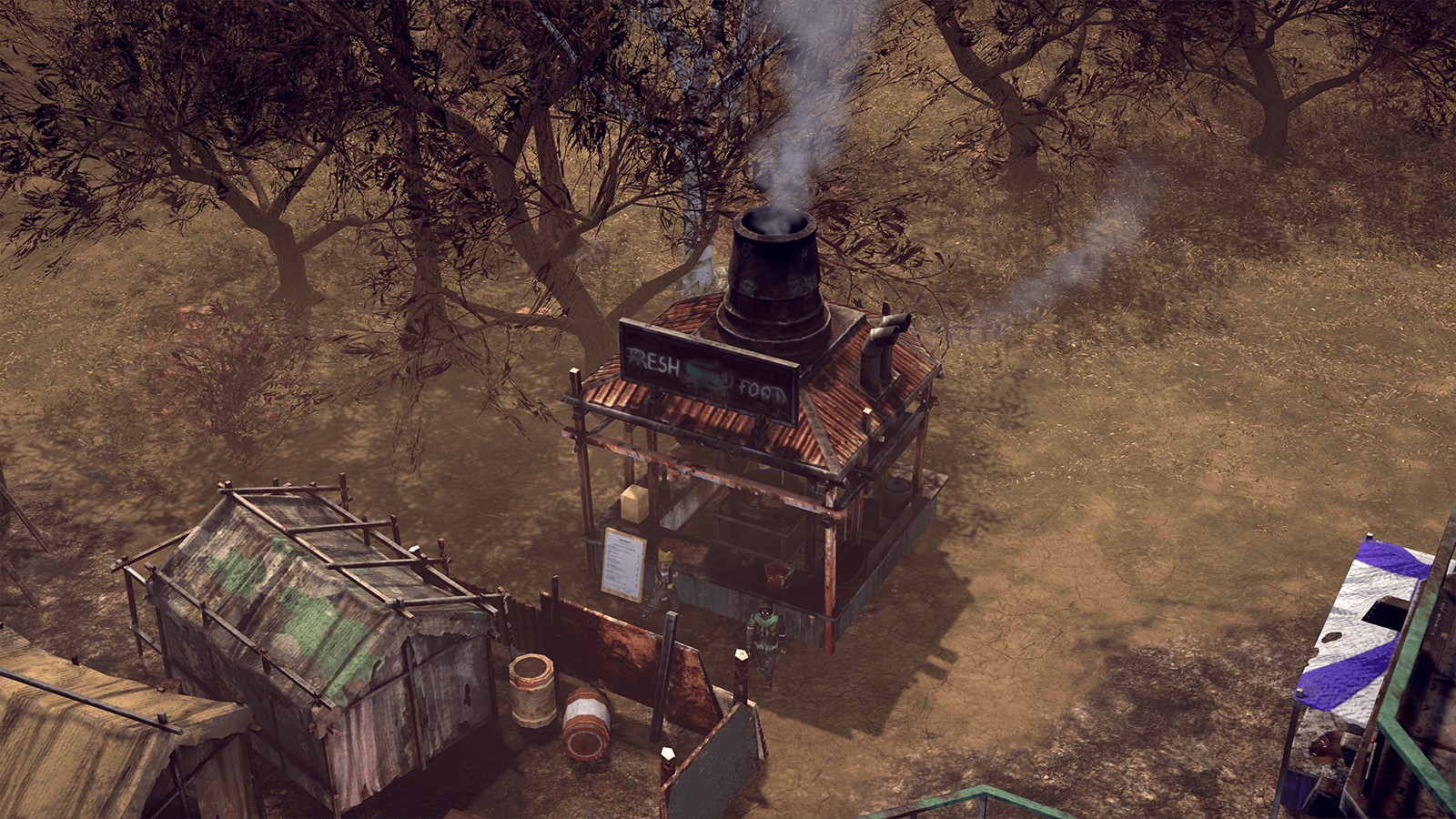 The Food Counter in action

The new Food Counter complements the revised behavior of the settlers. They generally prefer the shortest distance to a building where they can get food. The Food Counter can now be built near production facilities and gives food to hungry settlers. Inside the building, the player can choose what kind of food should be provided. Logisticians are responsible for collecting food from the specified area of influence and bringing it to the Food Counter. With the new recipes in the kitchen, it is also possible to determine more precisely what effect a Food Counter will have at the desired location. 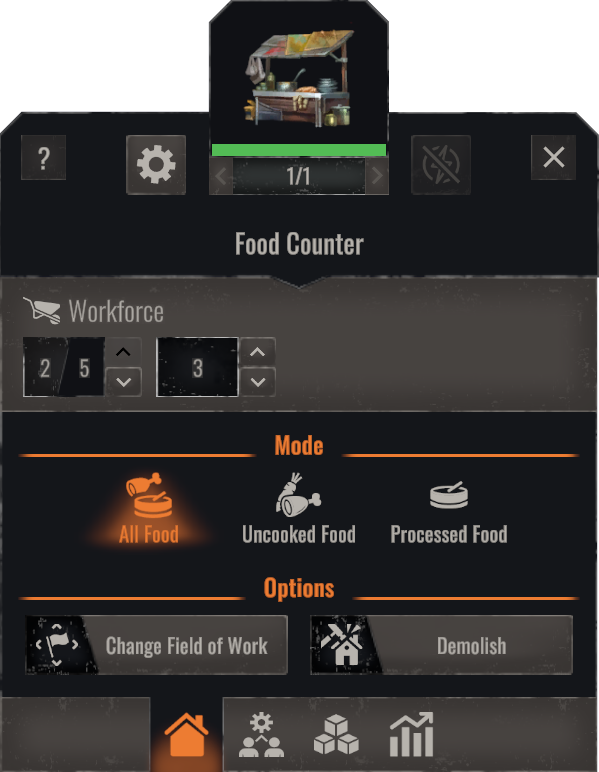 UI window of the Food Counter showing the different options

The behavior of the settlers is elementary for a functioning settlement and is therefore regularly examined and permanently optimized by us. Among other things, your feedback made it clear that there were no technical errors in the behavior of the settlers, but logical ones. The adapted behavior not only makes it more obvious to the player when which decisions are made, but these decisions now have a much more positive effect on the growth and preservation of the settlement.
Previously, settlers stopped their current tasks as soon as a vital need had to be met. This is still the case, but settlers now use the path they have travelled to satisfy all needs at once. In this sense, water supply and food intake no longer function separately, thus halving the number of ways they take to sustain life. Additionally, settlers now visit their homes in their spare time to get a small boost to their confidence and use it for reproduction. Also the autonomous allocation of jobs now works more precisely, so that fewer job changes take place overall without negatively affecting efficiency.

The priorities of the settlers in their building behavior have also been adjusted. In the Towncenter, the construction method that should be prioritized over the others can now be determined by drag & drop. This means that the expansion or maintenance of the settlement can now be sensitively controlled.

Road construction has also changed fundamentally. While settlers used to like to build just one piece of a road and then do other things, they now work through so-called "chunks". These are pre-defined "blocks" or areas of a road, which means that they are built faster and more reliably overall.

We know that there are still some things we need to fix, and we are listening to your feedback. We try to address all important issues in a timely manner and make the game as a whole more understandable and fair. However, it is important to note that Endzone - A World Apart is a survival game. Challenging gameplay, as well as a difficult learning curve, are intended and are designed to provide the player with a difficult task.

- Your team from Gentlymad & Assemble Entertainment