Ver todos os 1 avatares
Anúncios _
Beta 6 adds Stability, Bug Fixes and Content
publicado por Rasmus @ 03:56PM on January 19, 2021
Beta 6 of Above the Fold focuses on quality of life, starting with squashing a several bugs reported by all those amazing people, who took the time to let me know. I apologize for the fact that this release took longer than expected - some of those bugs proved quite tricky to solve, and I also wanted to include some fresh content.

But first, a big change in the importance of politics. The biggest balance adjustment in Beta 6 is that advertisements you display in the paper, now also affect the political lean of each issue. Ad-cards display the political association of the advertiser when you pick them up, and if you have a lot of ads from one side of the political isle, it will slightly tip the appeal of the issue in the same direction.

Personality traits have been part of the game for a while. Each comes with its own bonuses, penalties and associated events in the game, but now your reporters can gain additional traits. Any reporter who has less than 3 personality traits, may gain a new one if they experience a large, sudden shift in happiness (either direction).

There are a few new user experience features in this update as well, small things to improve the game overall, like simplifying a bunch of the text shown on screen for faster reading, new icons to quickly indicate the political lean of a story before you pick it up, and in other icon-related news, the guide at the top of the map now displays a flashing chevron next to any story type that is currently surging in popularity. 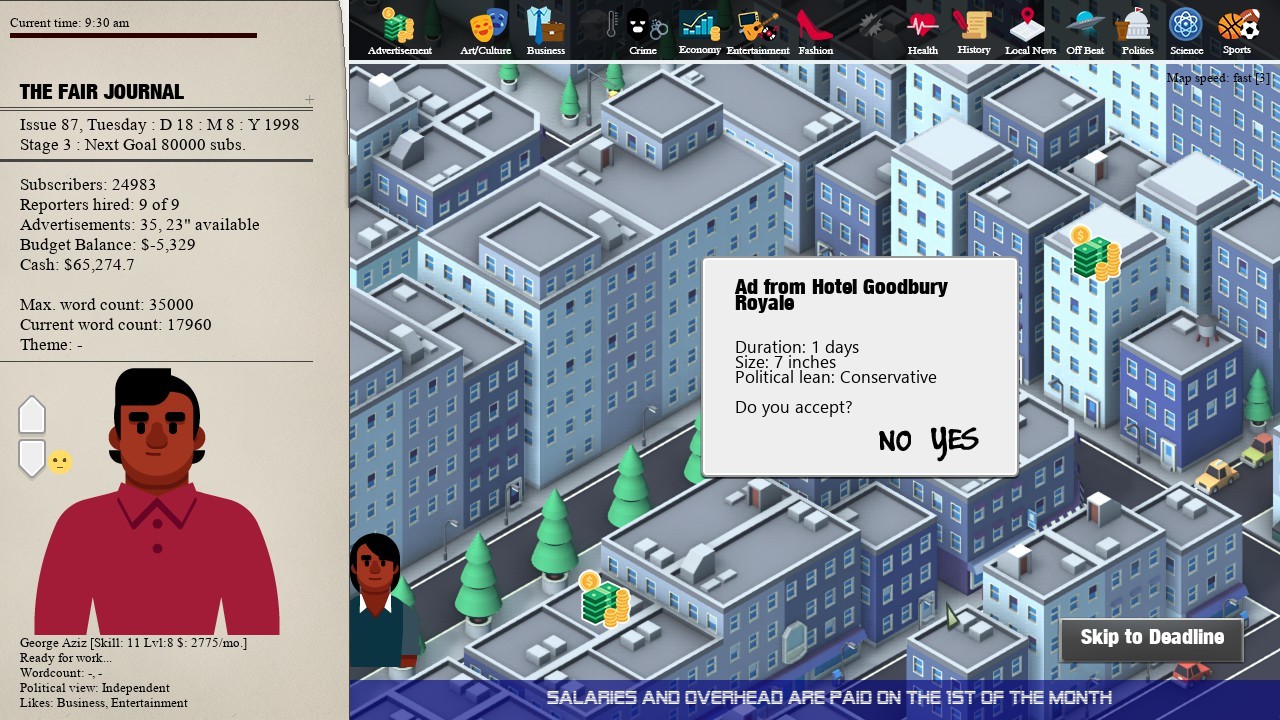 We also have 2 new controls! Use the Page Up and Page Down keys to control the music volume, and use the number-keys 1, 2 or 3 to set the scrolling speed of the city map. The current speed is displayed on the right, near the top.

A surprising number of people had requested "better cloud movement", so that was added too. Where the clouds would always continue in the same direction before, they now take map scrolling into account and move in a more natural way. Another player request was the addition of borders when playing in windowed mode, making it easier to move the game around. Done, and again, thank you for these suggestions and requests.

Finally, there are several new in-game events in this update. Two new 5-event storylines, each tying in with a specific upgrade and a themed story, and a few new procedural events that may repeat several times during the game.