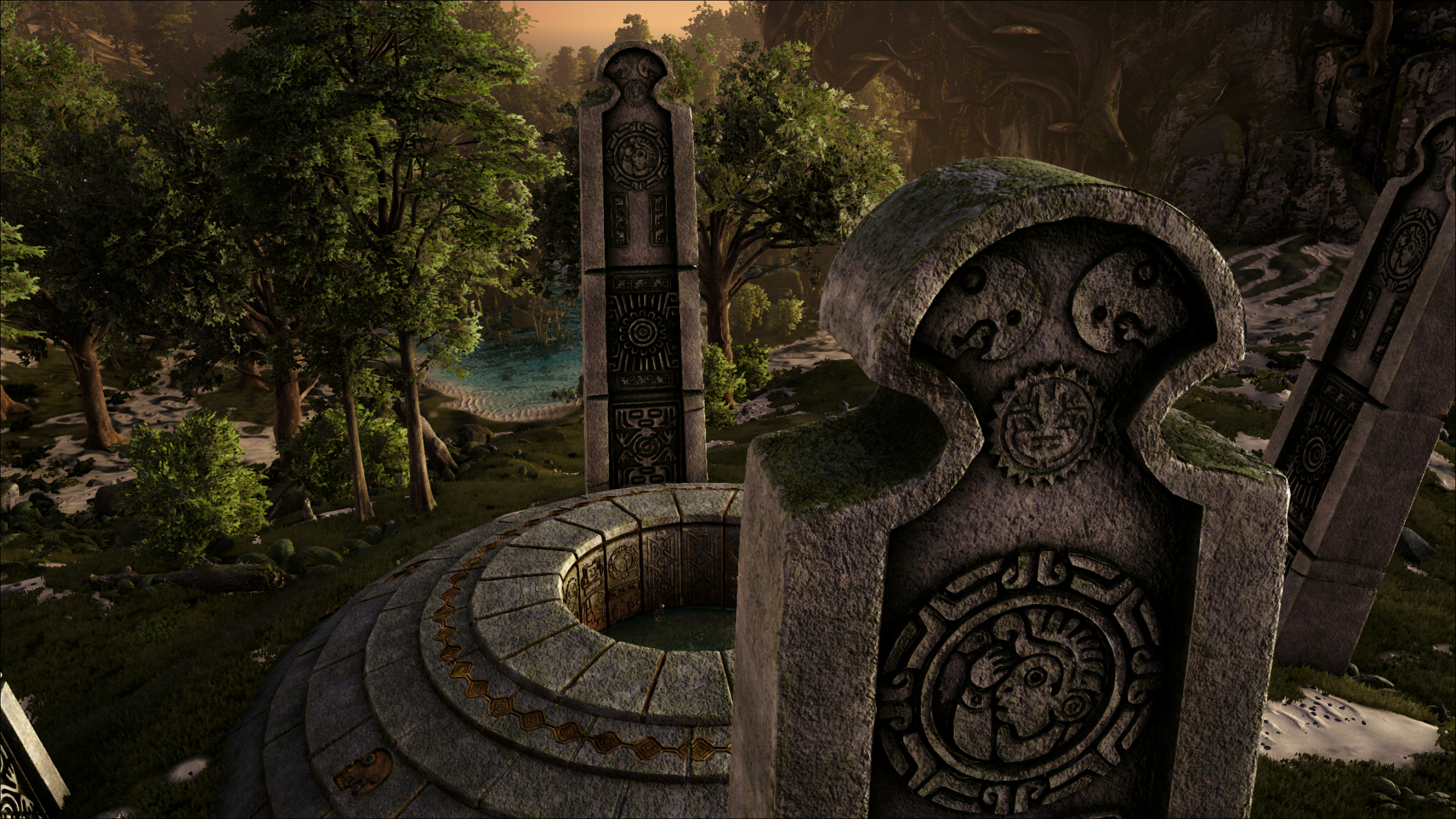 It had been a week or so after that fateful night before I was ready to set off to sea. I had arranged for all of my personal belongings to be sold off, in exchange for some supplies and passage on a ship heading east. The ship would rendezvous in Nozetal with a local captain who was known to take any fare as long as the gold was right. With my itinerary set, the days could not go by fast enough, anxiously waiting to set course for the lands unknown depicted in the cryptic journal.

We laid my brother's body to rest a couple days after I had discovered him dead, washed up on the shore. My boisterous brother had apparently made a name for himself in this small harbor town with nearly half the residents in attendance at his funeral. To somber the mood, his mates suggested a celebration in his honor and begrudgingly I obliged, on the terms it took place the night before I left. As much as I would enjoy a fitting send off for closest kin, I was still well aware that those that murdered Nathan could still be out there and would still be looking for the pages he died protecting.

The inn was full that night, filled with every sort of scallywag one could imagine. As I was packing my belongings in one of the rooms above, the windows laid open, a vent from the heat already rising from the festivities taking place below. Towards the end of the evening I made my way downstairs to make my appearances, anxious for this night to end so I could start my journey come sunrise. I took a seat at the bar with a few old crewmates and bided my time with half laughs and fake smiles, waiting for the opportunity to make some excuses to end the night early.

After about four or five half-baked, fully exaggerated stories and a sea shanty or two, I noticed my mug had run dry and was looking to the innkeep to top me up. However, as I lifted my glass to signal my predicament, I noticed he had much more pressing matters at hand. His eyes were fixed on the doorway, as if sizing up trouble as it entered the inn. As I peered over my shoulder through the crowded bar room, three figures in black cloaks made their way through the crowd and sat themselves at a table in the back corner. A chill went up my spine as I turned to face the bar and the empty mug in front of me, feeling their eyes burn a hole in my back. The room felt much hotter and as I gripped the pages of the journal tucked into my shirt, panic raced in my mind as sweat began to bead on my forehead. "You alright mate?" I thought the innkeeper shouted but all noises had become dull and unrecognizable as I wondered if I was about to share the same fate as my brother.

"Oi, you're clean dry, let me fix that for ya!", he continued as he grabbed my mug. But I was no longer concerned with my thirst, for it seemed my demise was inevitable, draped in a black cloak a few yards away. Thoughts raced in my head, of my brother, the journal, and the dreams dashed before they started. Through pure instinct, my body urged me to run. Run as fast as I can to anywhere. Anywhere is better than here. Before my head could process, my hand was already on the bar turning myself to the door. Eyes fixed on the target, I plotted my route through the crowd and out the front door. I took a moment to glance at my pursuers and as our eyes met, a slam pierced through the fog of noise and shook me to attention.

I turned to the bar to see a frothy mug had been dropped at my place and a kind smile had returned with a solution to my woes.

"Take a swig and you'll be alright lad," he beckoned. Dazed as if the train of thought had been derailed, I grabbed the mug and took a hearty swig, half in hopes this ale would deliver me from this hellish situation. To my surprise, my salvation wasn't in the mug but under it. As I wiped my lips with my sleeve and looked to place the mug down again, in its place was a worn iron key. My eyes widened as I stared at it and when I finally looked up at the innkeep, he leaned and whispered, "You should get a bit of rest now. I think you'll find this room a little more comfortable."

As he leaned back and left to address the rest of the clientele, the pieces, once jumbled, were now set and I had hope. With my back to my potential assailants, I carefully tucked the key into my jacket and stood up from the bar. With one last swig, I finished my drink and then said my farewells. I left every coin on my person and carefully made my way back up the stairs. As I ascended, I took one last look across the room at the three in black, hoping to never see them ever again. I raced down the hallway past my room and used the key to enter the room next door. I slid into the room and quickly locked it shut. With my back against the door, I clutched the journal at my chest and let out a deep breath.

It was not long before I heard footsteps in the hallway. Nervously, I had placed myself up against the wall shared with my previous room and could hear, although muffled by the noise from below, as they made entry into my former quarters. They moved quickly, breaking down the door and quickly realizing I was no longer there. From the muffled shouts, they deduced I had left through the window that had been left open and sent one in search of me while the others stayed to search the room. The desperate snapping of wood and tearing of cloth was the only thing heard for the next few minutes as I sat in silence, occasionally startled when their carnage would fly across the room and slam into the shared wall. Thoroughly spent and unrewarded, the noise from the neighboring room subsided and finally, after some time, hurried footsteps rushed down the hallway to continue their search elsewhere.

They had not found me but I was not safe yet. I dared not sleep in fear of their return and sat quietly, in anticipation of the footsteps coming down the hall again. Paranoia began to creep in as every sound as the night went on drew closer to sounds of imminent danger. It was not long before I began pleading within myself for the sun to rise and to be away from this town. I needed to do something to keep the idle mind at bay. To keep myself from madness, I lit a candle on the floor and pulled out the journal. I hastily arranged the sea-soaked pages on the floor and began to decipher the next entry in the journal.

As the words and phrases unraveled, I became more and more obsessed, losing my senses of the world around me. The findings Nathan died protecting would change the world forever and it was our fate to share them with the world. The sky had changed to a lighter shade of blue and a peek of orange could be seen once I was done. In my amazement and relief, I read the words aloud, grateful to see another day.

“I set sail to the Walfield Atol, an island reported to have Power Nodes located on it. As it appeared on the horizon, I could see an odd formation sticking out of the sand. It looked too straight to be a rock, but due to its size I couldn’t imagine what else it could be. As I sailed closer however, I realized it was carved! It was an immense statue. I could see the outline of the skull carved into stone, eyes glowing green in the late evening light. Dropping anchor, I jumped into the water and swam to shore. This statue had to be bigger than any I have seen in these waters before. Was this the structure that so many pathfinders have spoken of? I set off on foot towards the center of the island, where an Altar was rumored to be. 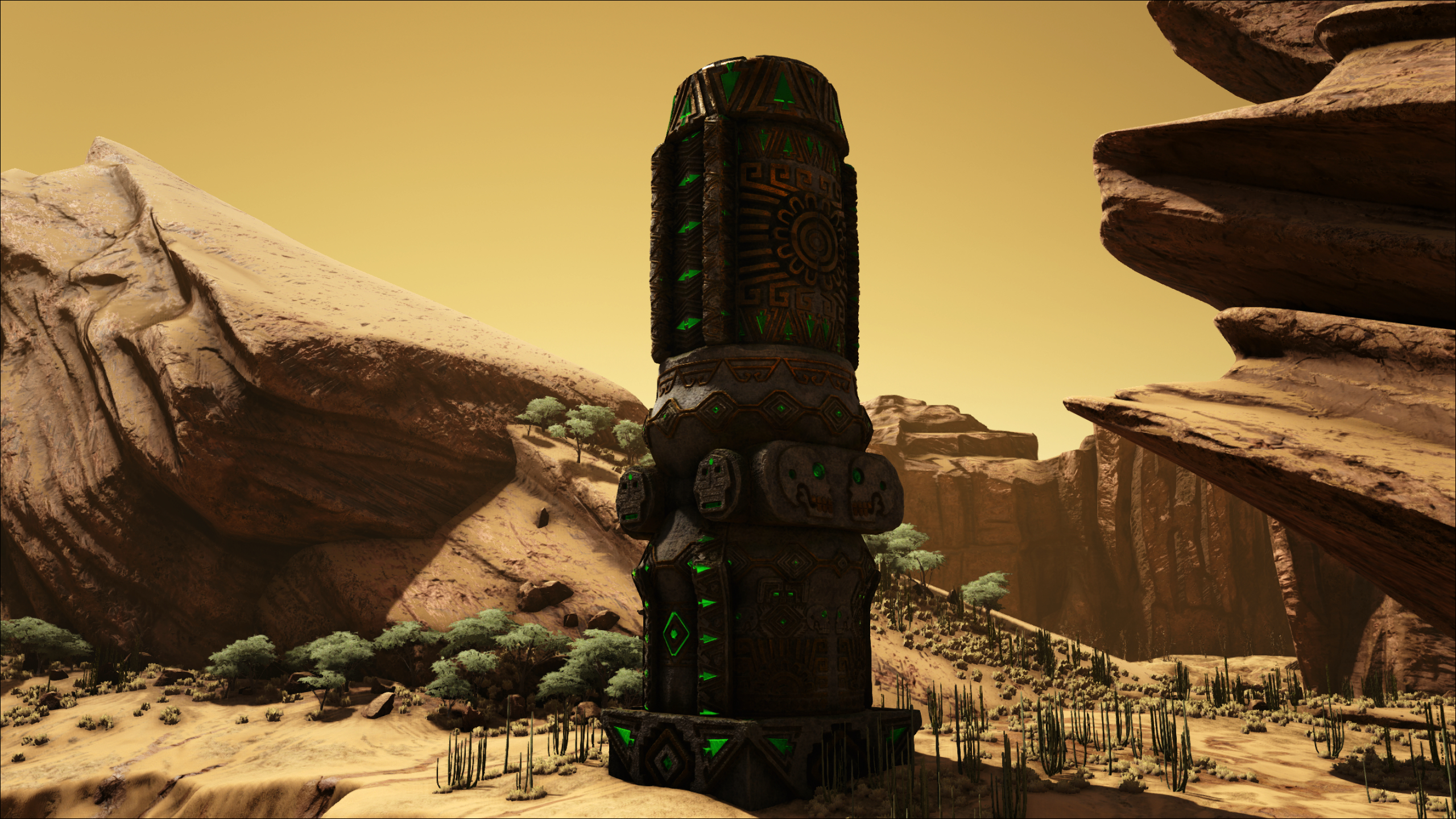 As I follow the river around a large rock formation I pass carved rock pillars. Similar to the totem statue that I passed earlier, but not as large. Looking forward I see something that can only be described as a man made hill. It is a giant perfectly round… mound. The same skulls that were carved into the totem are all over it. I made my way to the top and almost fell face first into a pit. I’m sickened by what I see at the bottom. Several skeletons and rotting corpses are floating in a shallow pool of water. The smell of rotting flesh makes me fall back, slipping and rolling to the dirt. Shaken, I stand and rush past this Burial Mound hoping that that is the worst I find on this island. 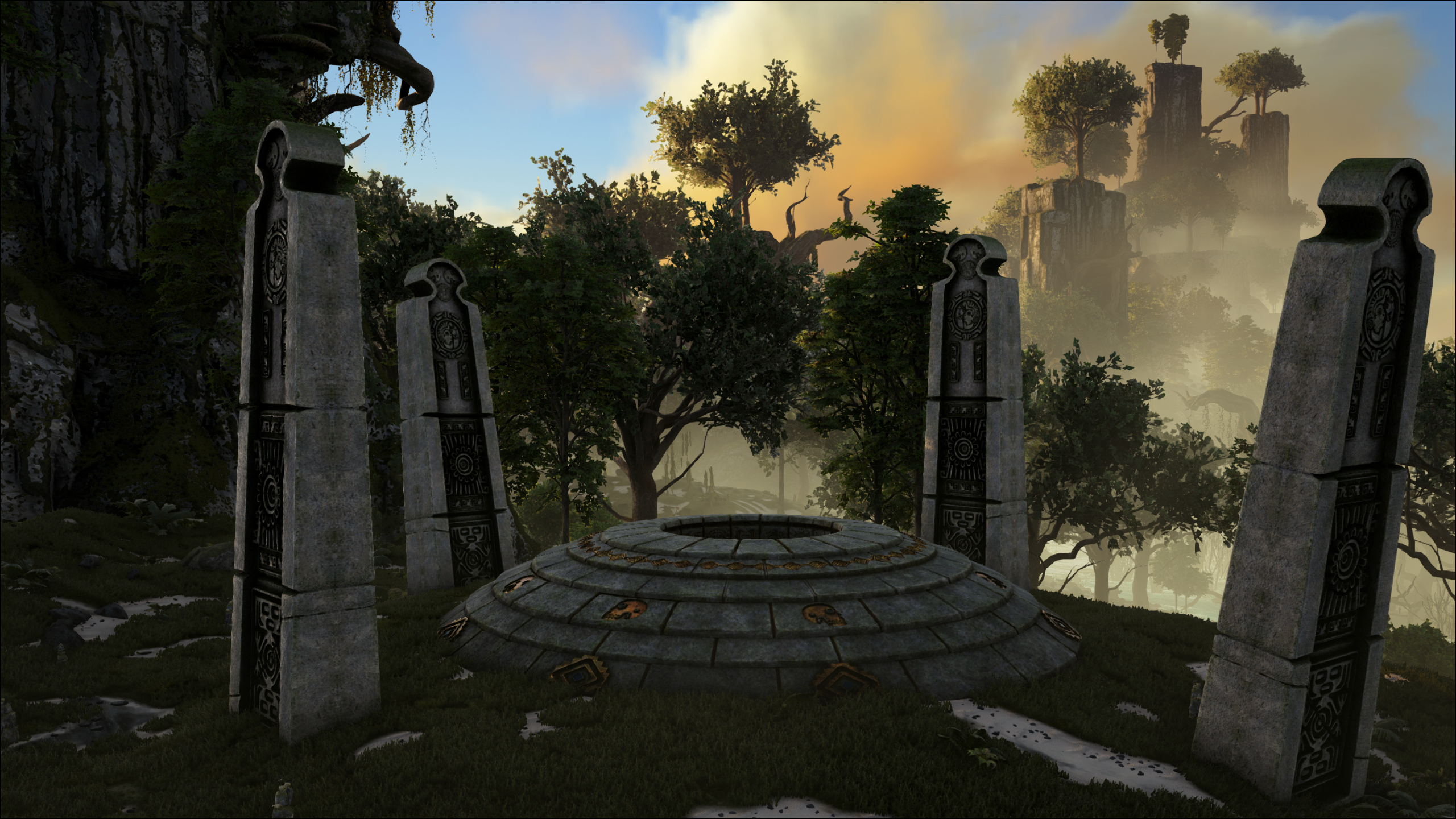 Finally, I found the Altar that I’m looking for. Cursed Pirates are everywhere, so I am hiding in a bush. Watching the pirates I notice that they are carrying large chunks of stone and wood around another huge boulder. I sneak around and sink back onto my knees. They have built what looks like a temple. There must be several rooms inside, as I watch at least fifty pirates enter the structure with full loads, but leave empty handed. Do I dare try to sneak inside? 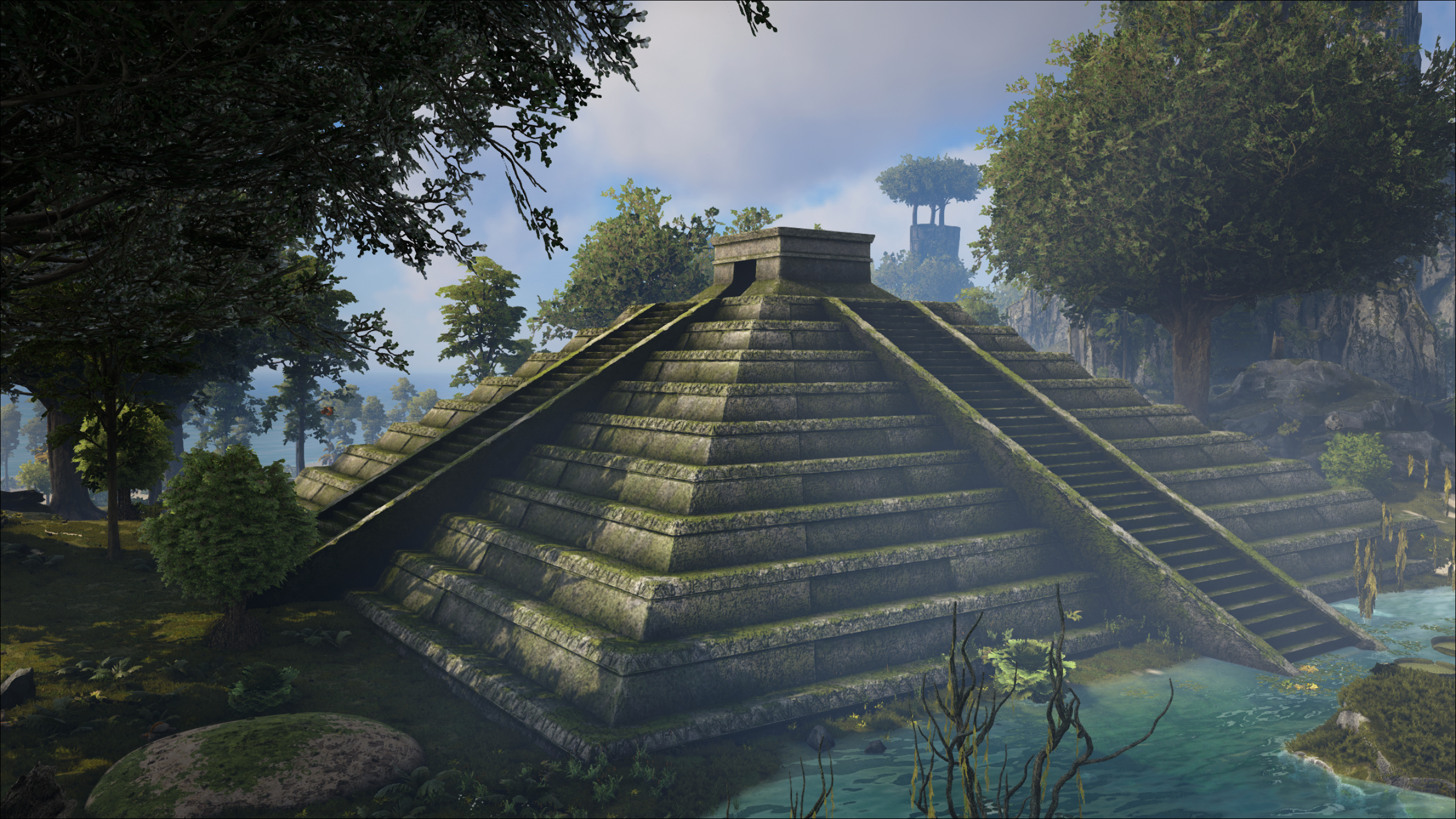 I didn’t bring enough grog for that. I hurry back to my Sloop and set sail for the nearest freeport.”
These altars, these monuments, could etch our names in history. Not only that, I finally had a destination. I frantically gathered what was left of my things and raced to the harbor. I sprinted through the streets, half-delirious, half-jubilant, shedding tears to my good fortune. And as the anchor raised from my vessel and the harbor slowly shrank into the distance, peace had finally set in. The doors were all shut. But miraculously, I had been given a key, and now, wonders untold await me. Exhausted, I went into the hold for some much needed rest. I grabbed whatever I could find and made a bed on a few crates. And there I slept, dreams reignited, swathed in a long black cloak.

We hope you are enjoying our continuing narrative building up to our next major patch! We'd like to announce today that we have a set date for the new update, October 27th. With this update, we will be having a full wipe of all servers. We can't wait to show you what is next for Atlas so stay tuned for more details!

Again, we would like to emphasize that ATLAS is still in Early Access, meaning many things can and will likely continue to drastically change - even in the middle of development. Anything discussed is only up to date as of the moment it is posted. Features and changes that ultimately make it to the next patch, as well as timing, may be different from what was previously discussed.

As always, we appreciate the suggestions and feedback from the community. Please keep them coming! Thank you for all of your support! :)