Updating, be with you shortly! 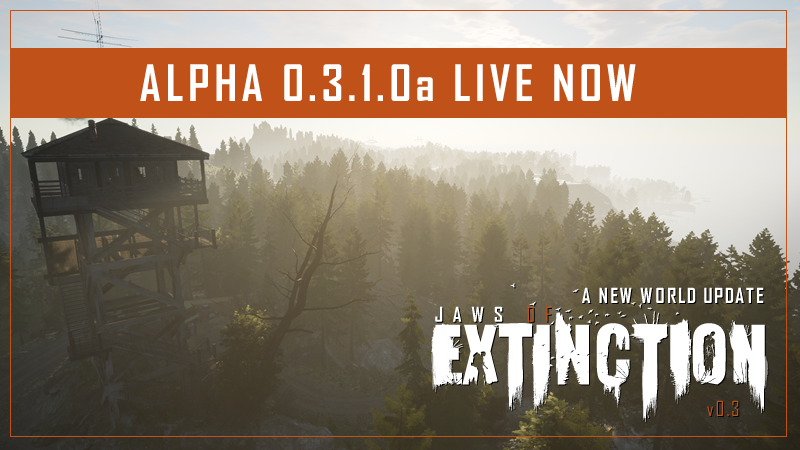 Seasonal greetings one and all! Version 0.3.1.0 focuses on a variety of NPC additions and improvements, new sleeping functionality and a stockings-worth of other new features and fixes.

Furthermore, a new area of Eden Nadir has been opened up with the addition of Sen’s watchtower hideout. Saddle up your horse with new storage saddle-bags before you explore the news lands.

Several NPCs have received a facelift as well as the addition of some new friendly folks in the safe zone.

Developer Comment:
It would NOT be advisable to use old saves on this build, pre 0.3.1.0a and to delete old game saves. Use at your own risk of extra bugs and crashes. Make sure to load all saves from DX12 version of the game

0.3.1.2 HOTFIX
0.3.1.1 HOTFIX
0.3.1.0 Update Summary
Well we had a week of HOTFIXs and we were all set to release HOTFIX 0.3.0.8a, but thought as we had added so much new functionality while we were fixing and reworking features, we have decided to release this HOTFIX as a complete mini patch. So here are the details for alpha version 0.3.1.0a 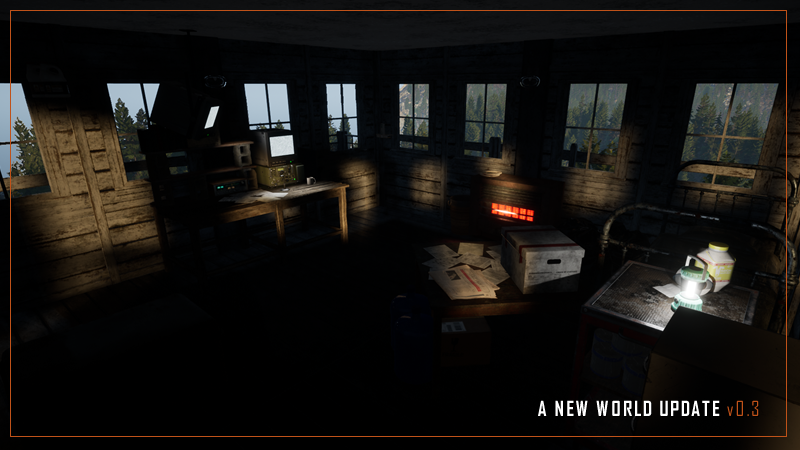 Eden Nadir
Developers notes:
We are currently working on reintroducing Sheriff Sen back into the game as a quest giver, but this time instead of just being available via the radio. You will also be able to meet him in person in the Backwater Beacon safe zone and his hideout. 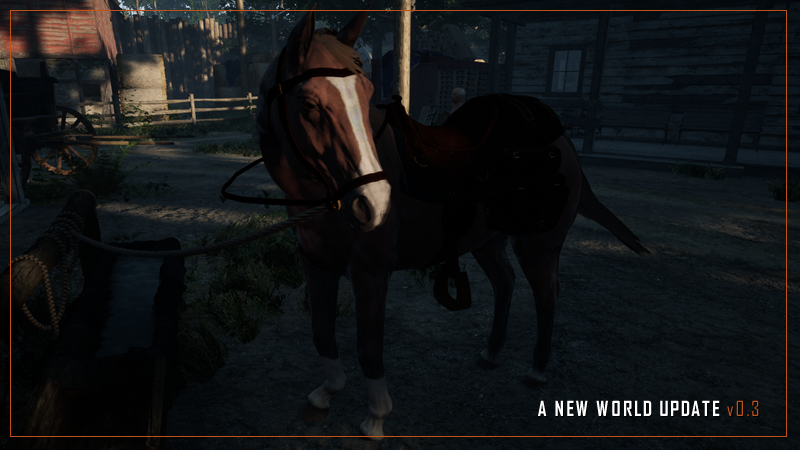 Hanouten Safe Zone
Developers notes:
Brendon’s barn has slightly been reworked, ready to add functionality for horse retrieval and hospitalisation that will be coming in the near future. This will allow the player to pay Brendon to retrieve a lost or downed horse and return it to the barn. If the horse was downed in action you will be required to attend to the horse daily until healed. 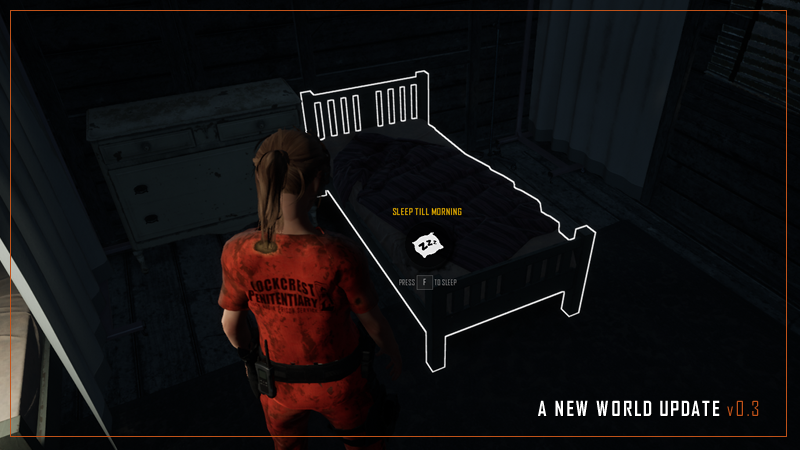 Player
Developers notes:
One of the notable updates for players is the ability to now sleep until morning using the bed you spawn at in the medical center at Hanouten’s Blackwater Beacon safe zone. You can also sleep by placing down a tactical tent that can be crafted, purchased or found in the world.
The night will still take time to pass, although it is sped up by 400% and will take a maximum of 3 minutes to pass the entire night cycle. You can only sleep during the hours of 19.00pm and 6.00am, at the moment we have allowed the player to only sleep until 6.00am passing the night hours and replenishing 100% of your energy and 50% of your wellness. We have plans to expand this and allow players to exit sleep at any time and also set the time they want to sleep till. 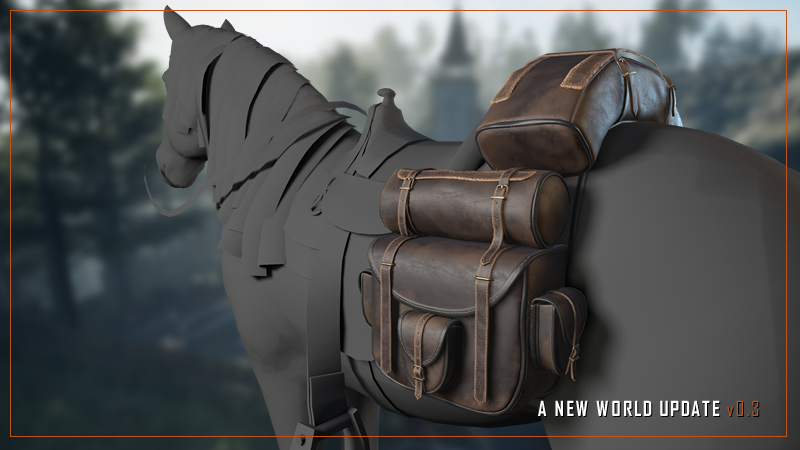 Vehicles and Horses
Developers notes:
We decided to rework the horse movement as it never felt right and was always a little awkward to control, we feel the horse is now one of our favourite means of transport around the map. Following community feedback we have created saddle bags for the horse. These can be purchased from traders in three different sizes, small, medium and large. The storage for the horse is slot based like containers in 12, 24 and 36 slot sizes. You will be unable to remove or swap a saddle bag if the bag has items in it. You will need to remove everything before swapping or removing. 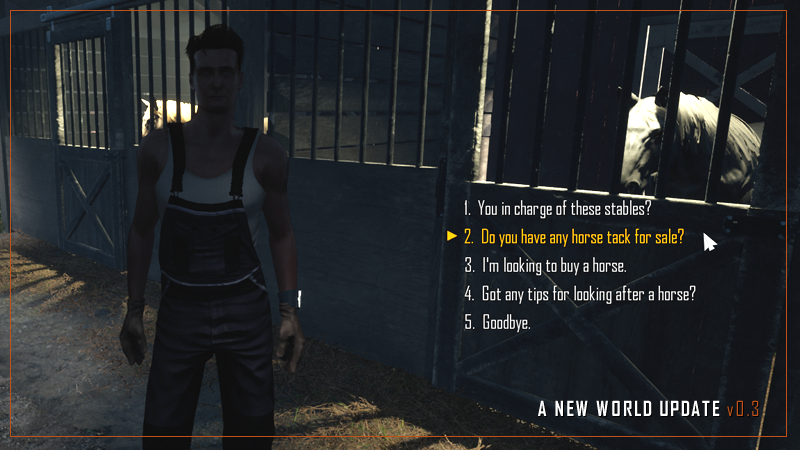 NPCs and Traders
Developers notes:
The main bulk of NPC updates affects the navigation and activities of NPCs. Since the last update, a number of weaknesses were noticed that could lead to strange behaviour or inactivity. NPC navigation has been improved for all NPCs so they are now able to identify smaller terrain features better. This prevents cases where NPCs could get stuck on low height geometry thinking that it was traversable. There is a tradeoff with regards to the speed at which navigation can be dynamically built. However, improvements to prevent NPCs getting stuck in a loop when navigation is not available have also been made to both counter this and mitigate situations where NPCs freeze up without navigation.
Some tweaks to NPC combat have been made but nothing too major. The changes are mostly orientated around navigation and mercenary accuracy. Future updates will more specifically investigate NPC combat behaviour, especially infected who sometimes struggle to identify targets.