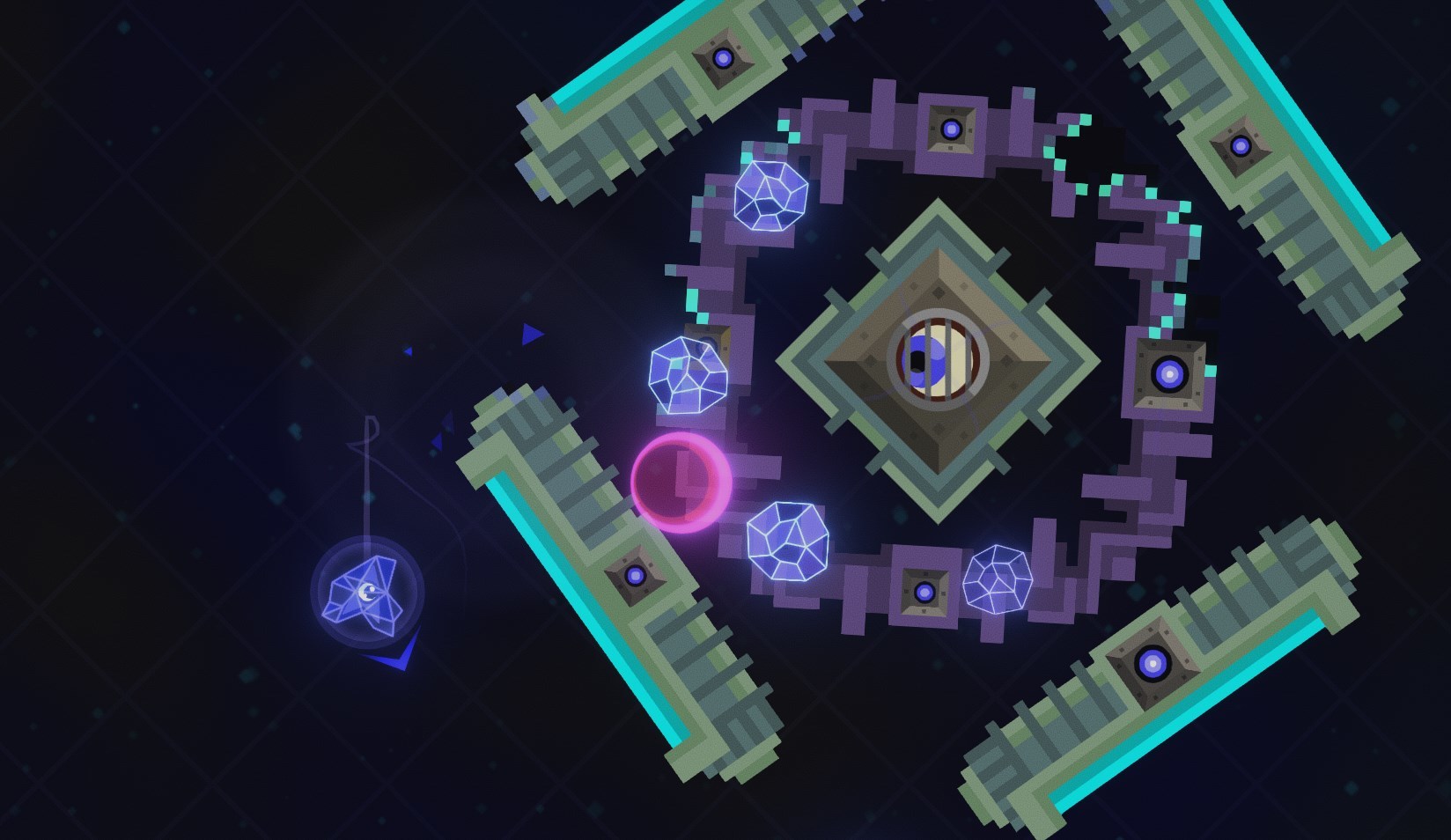 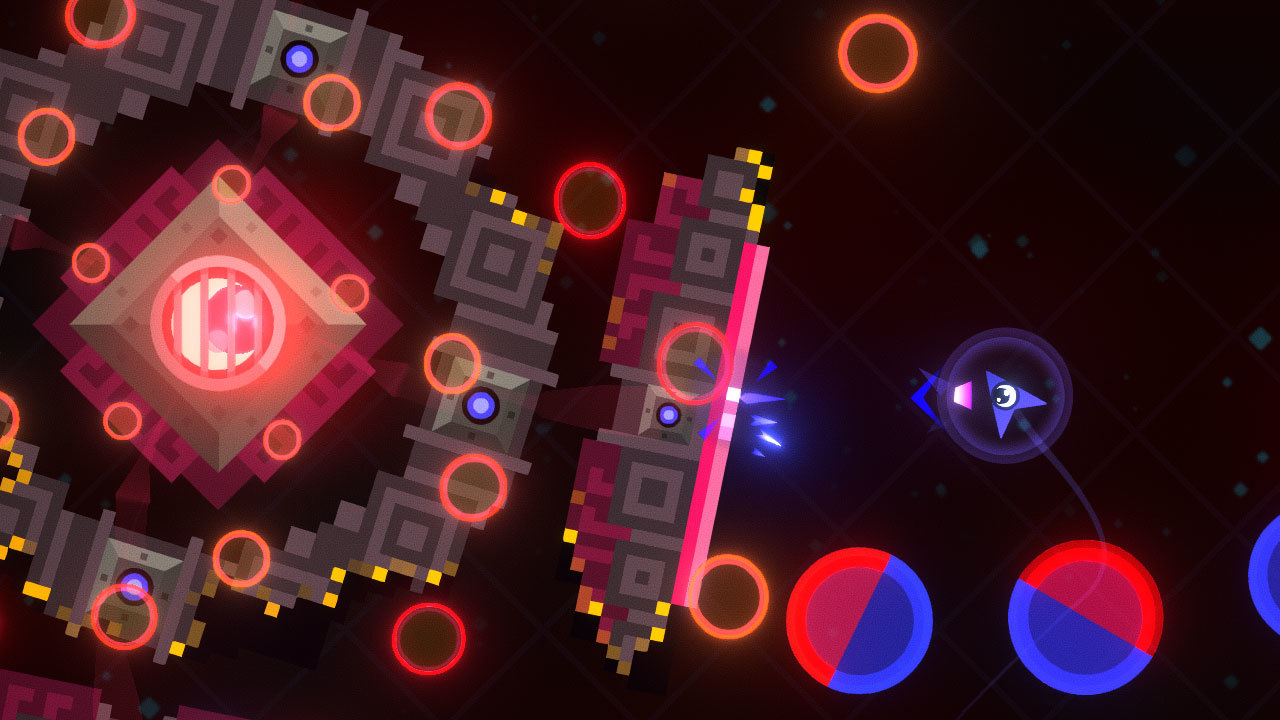 Destroy four unique bosses as fast as possible. Each boss gets stronger when another boss dies. You can fight them in any order, so experiment with different strategies and compete on the leaderboard.

It's available on the workshop here, though you should be auto-subscribed to it already. 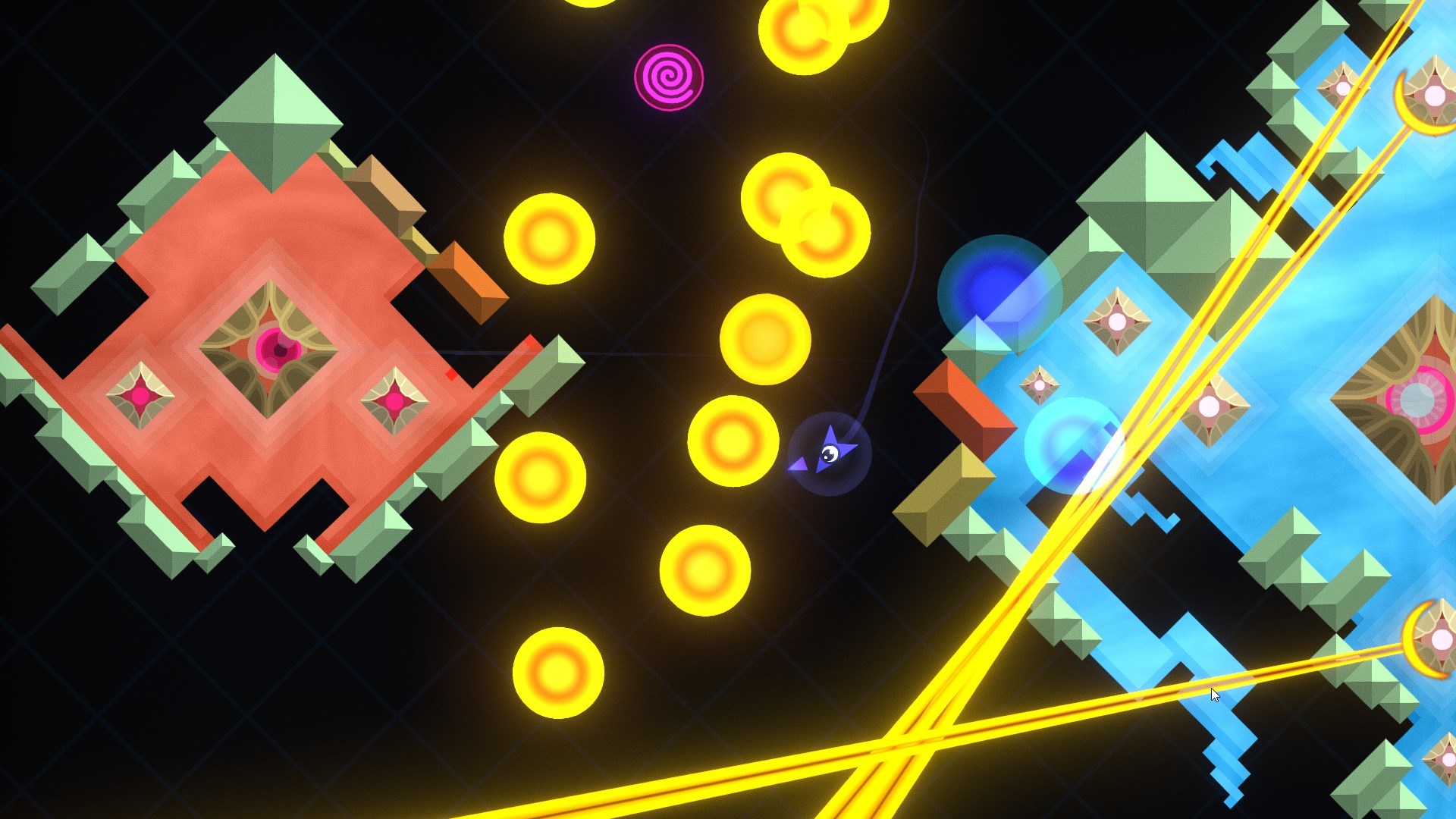 If you're itching for even more challenging content, make sure you check out the Chaos Campaign by community member GNL2002.

At the time of writing, their creation features 8 inventive new bosses to defeat, complete with custom attack patterns and dialogue. While already impressive, the campaign is a work in progress so there might be tweaks and additions in the future. 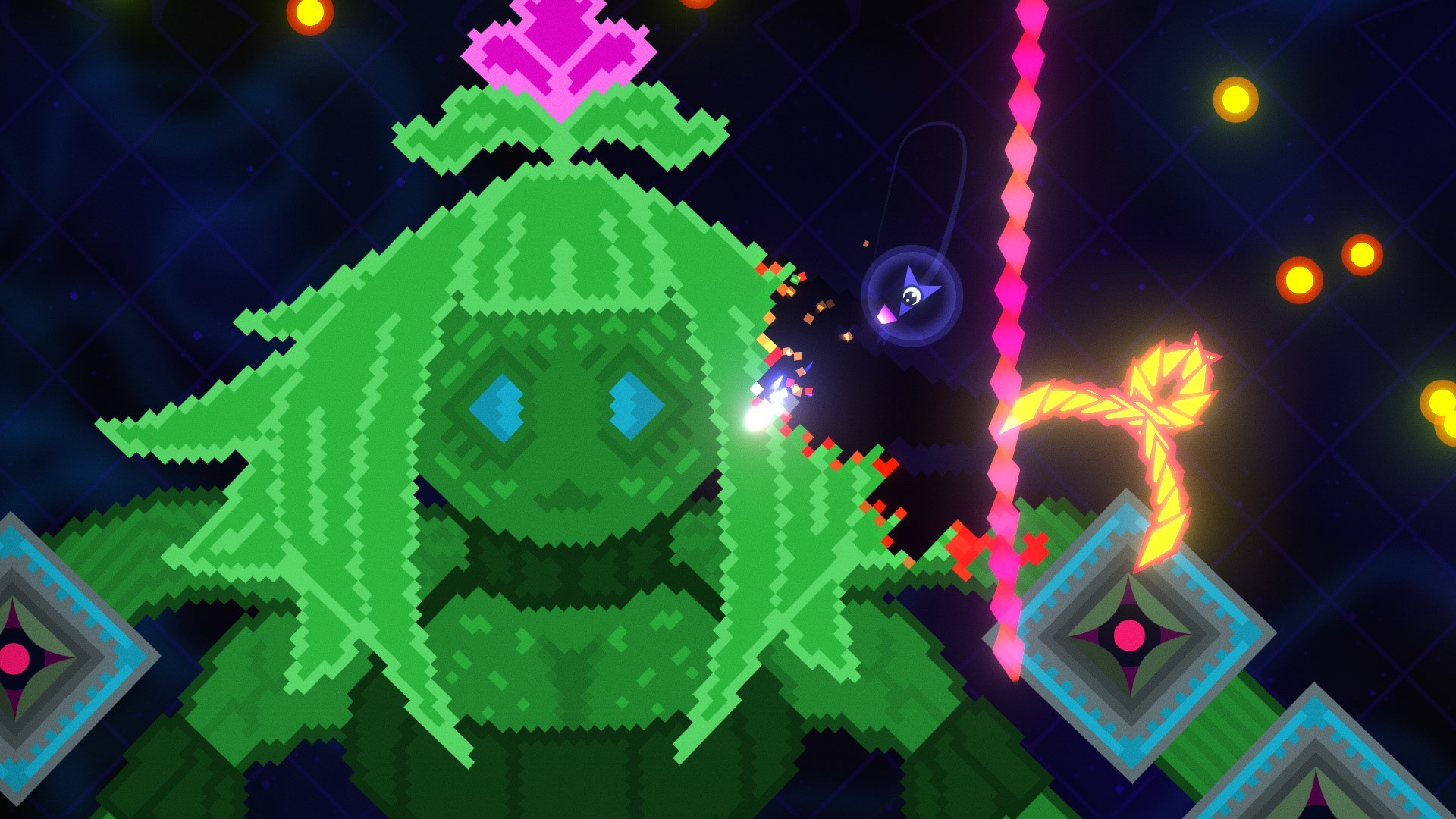 Also worth checking out is W1ND's reimagining of our official campaigns, with
11 bosses transformed into unique and stylish galactic waifus.
Hopefully we'll get to see the remaining 3 bosses converted soon! 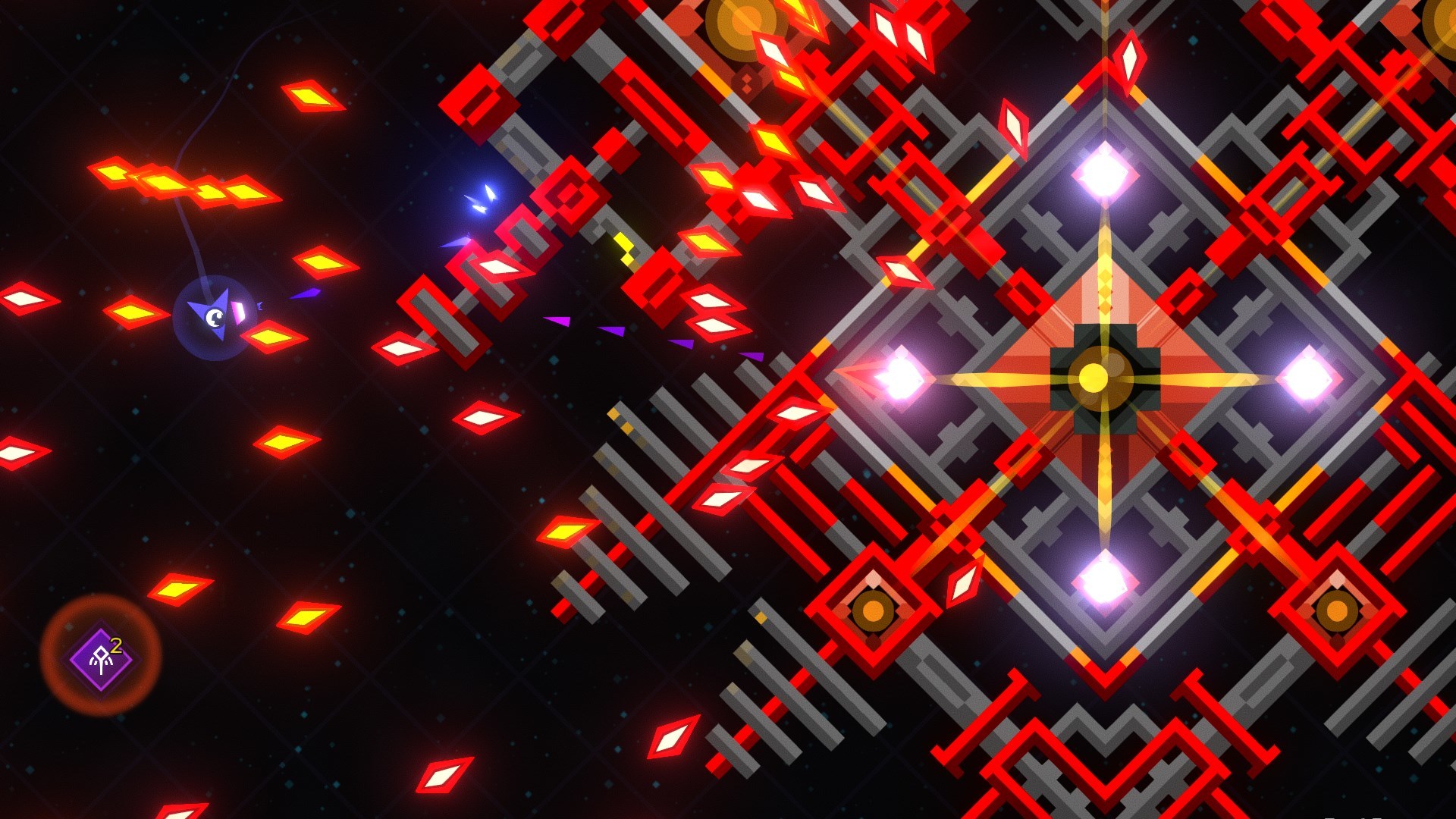 Last but not least, current #1 player Krahie has authored a custom stage of their own called Gridlock. This challenging design has a particularly satisfying second form, give it a try!

If you're interested in creating your own stages, check out the tutorials[facepunch.github.io], and feel free to ask for help in the Chippy Discord[discord.gg]. 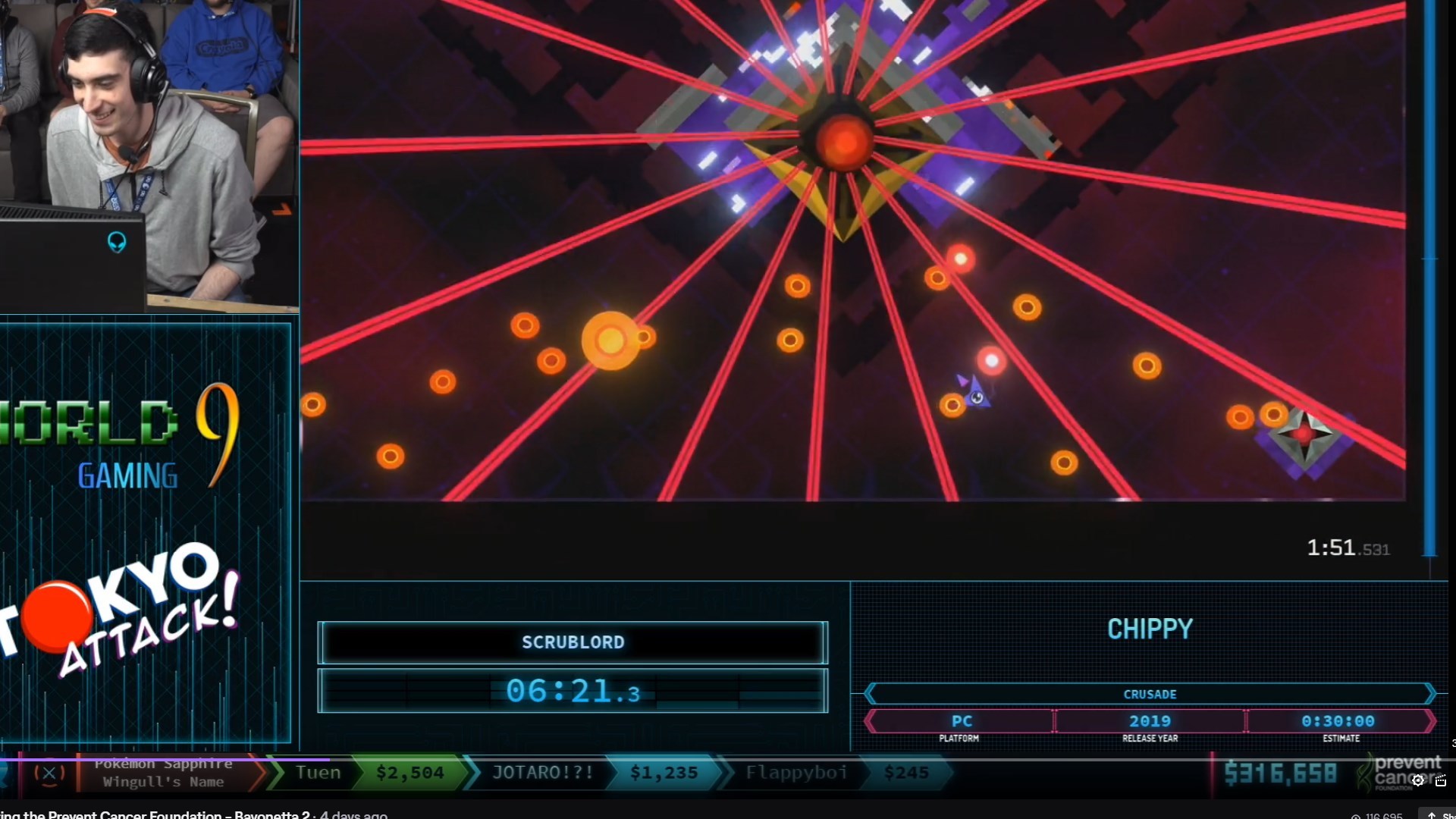 We were thrilled to see Chippy on Awesome Games Done Quick recently. The Crusade campaign and Xulgon (spoilers!) were run by Scrublord, who did a great job of presenting the game, demonstrating high level play, and performing some exploits.

Future Plans
We're still moving along with the Switch port, and are optimistically investigating adding local multiplayer support to all versions.

You can also expect some more official workshop stages at some point.

查看所有 3 条留言
Easy Mode Update
2019年11月19日下午5:46 - Ziks
Easy Mode
For anyone that finds the official campaigns too unforgiving, we've released easier versions of all stages (except the final boss). These are available right now on Chippy's Workshop, although you'll automatically be subscribed to them the next time you launch the game if you haven't already done so. 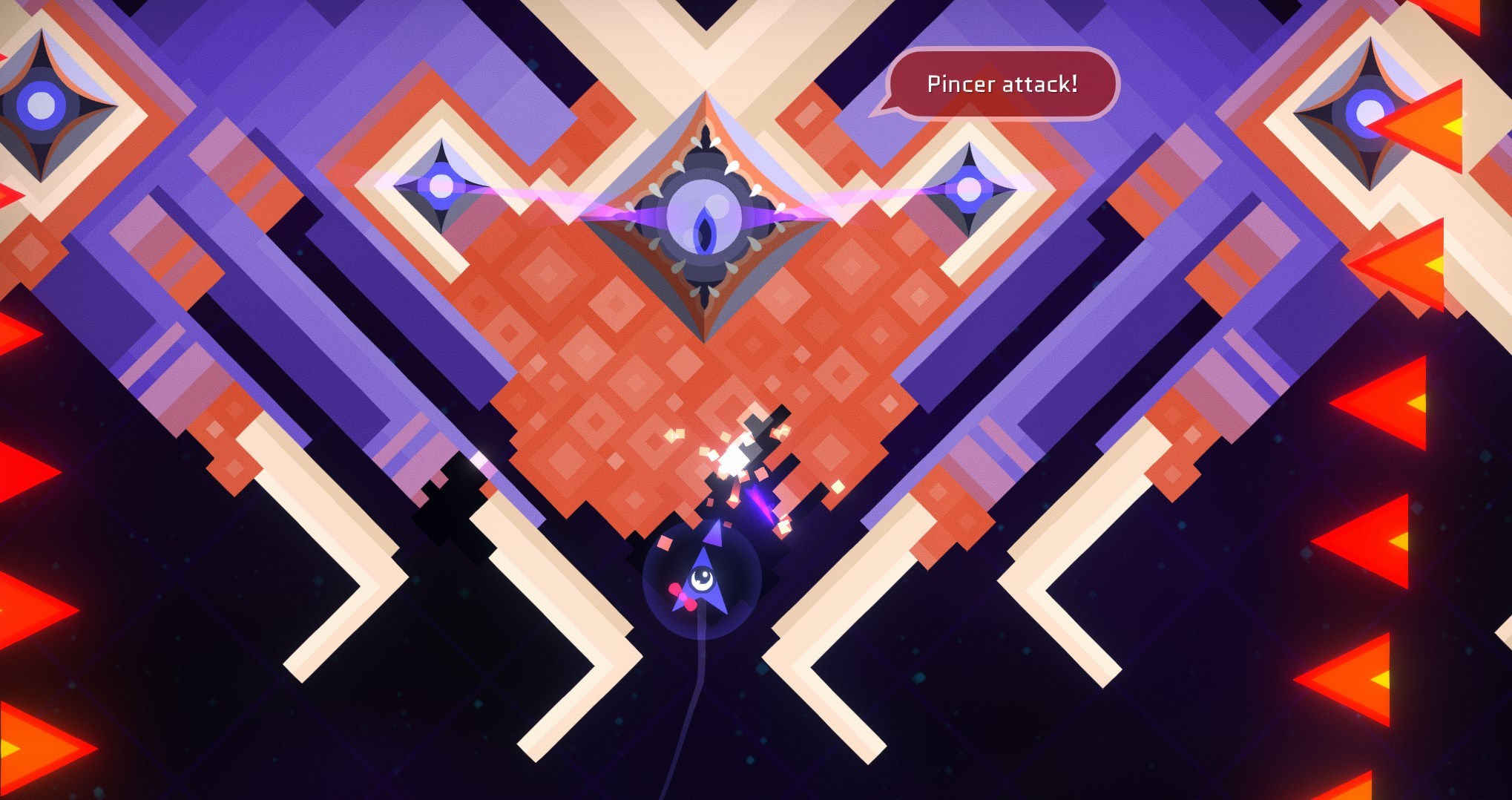 A variety of elements have been tweaked, for example you will start with some shields from the get go, and powerups are more generous overall. Most enemy bullets have been modified to be more easily avoided, and there are some stage-specific changes like reducing Overgrowth's regeneration speed. You'll also notice that Chippy has been adorned with a fetching bow, which provides a much needed morale boost. 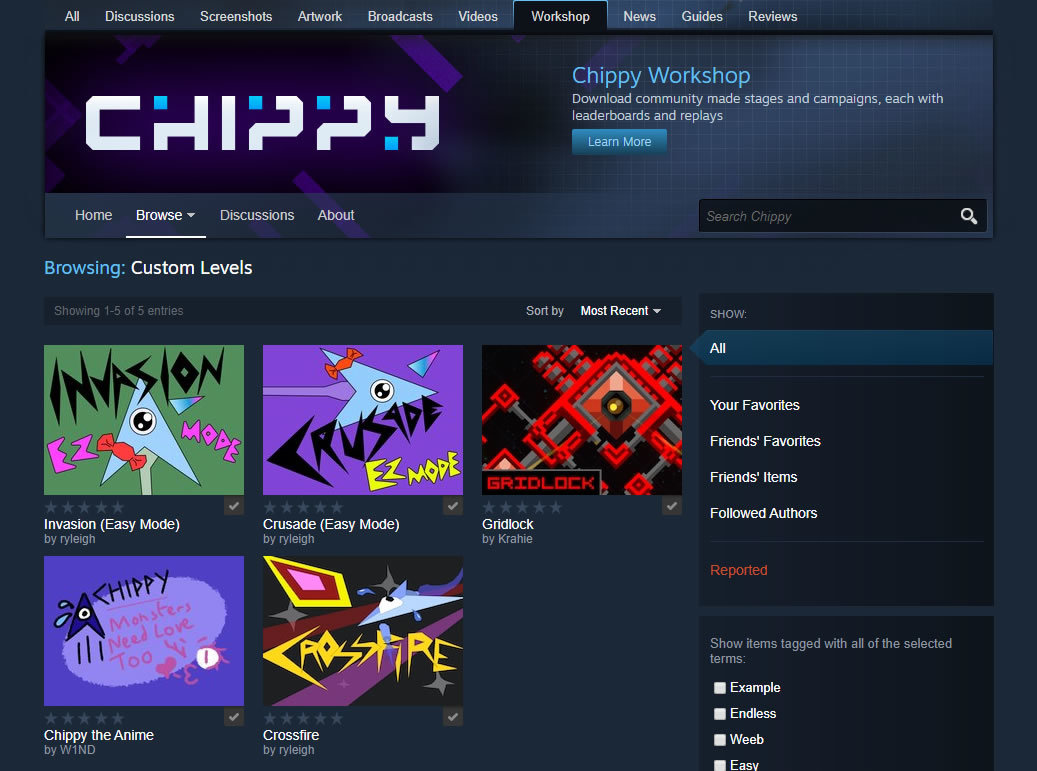 Workshop UI Improvements
Also in this update, we've added a bunch of new features to the Workshop UI we introduced last time. You can now rate subscribed campaigns while in-game, and see if any of those campaigns have received updates since the last time you played them. Also, now it is possible to sort subscribed campaigns by various criteria by clicking the headings of each column in the Workshop menu. Finally, there's now a button to open Ryleigh's modding tutorials right from the Workshop menu. 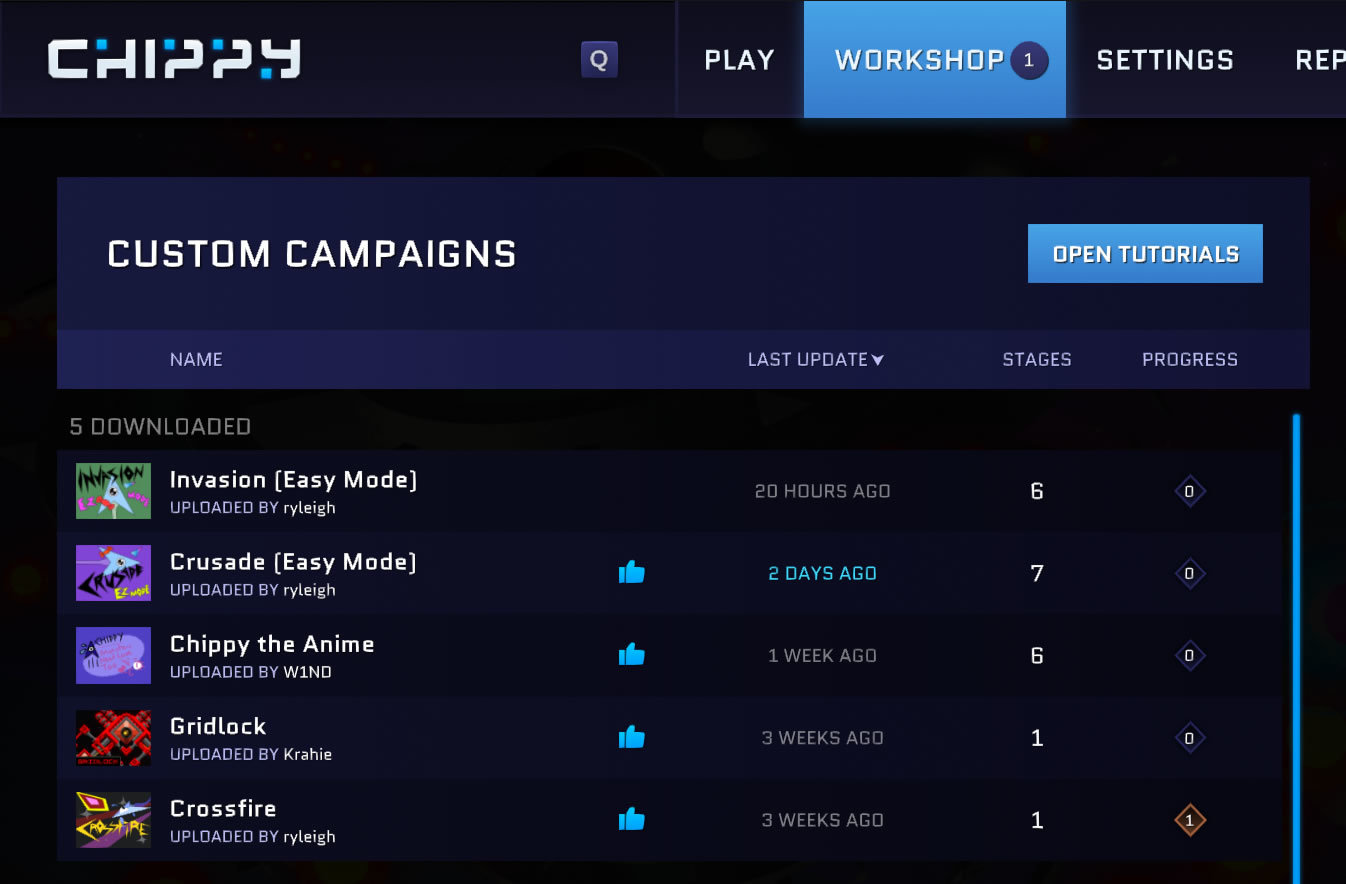 Relative Aiming Mode
This is a more experimental change for any mouse and keyboard players. You can now bind a key or mouse button to enable "Relative Aim" while that input is held. This mode will switch the crosshair to move relative to whatever is behind it, instead of relative to your screen. You can use this to, for example, automatically track a certain part of a boss, even while you fly around it. Let us know if you find this mode useful, or have any ideas for how to improve it!

留言
The Workshop Update
2019年10月28日上午10:11 - Ziks
Workshop Now Available!
This update's most major feature is the ability to create, share and play custom levels. As mentioned in our last update in August, everything needed to create any of the official levels is accessible, including using custom graphics, sound effects, music and scripting. 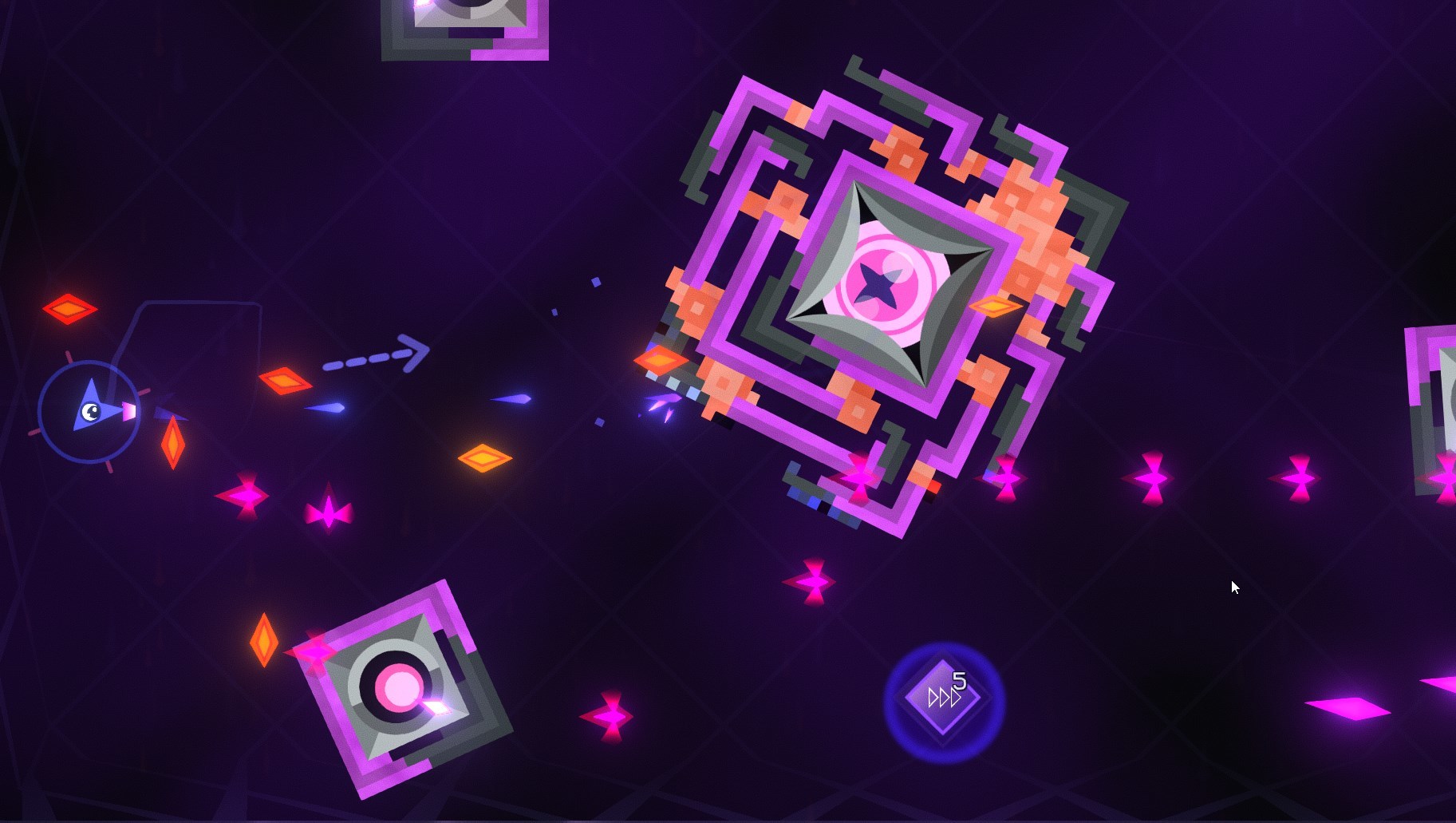 To demonstrate what's possible, Ryleigh has built a brand new fully-featured level: Crossfire. This stage also demonstrates the new Endless Mode that we mentioned last update, where the goal is to survive for as long as possible against an increasingly escalating onslaught. This stage also features 4 unique minibosses, with some inventive new attack patterns to avoid.

You can subscribe to Crossfire here: https://steamcommunity.com/sharedfiles/filedetails/?id=1863739017
After you have subscribed to some custom levels, you can find them in the *Workshop* tab in-game. Each item in the Workshop can contain one or more levels, organised in a campaign. Levels downloaded from the Workshop have leaderboards and replays just like any official level.

The first time you play one of these custom levels the game will need to do some extra pre-processing to make sure it can run as smoothly as an official level, resulting in a slightly longer load time. However, the result of this process is cached so that it only needs to be performed once (until the level gets modified by the creator).

If you want to try your hand at making your own level, or even a whole campaign, check out Ryleigh's tutorials:

You'll mostly be writing JSON files to describe the appearance and behaviour of your levels, but we've also provided a pixel editor you should use to create the visuals for your own animated bosses, as these use a custom format. Included in the game files is an example custom stage, which you can use as a springboard to try fiddling around with your own creations.

Legacy Replay Support
In the process of implementing Workshop support, quite a lot of the internals of the game have been redesigned and rewritten. This had the added benefit of allowing us to resolve some performance issues, and in general clean a bunch of systems up. Unfortunately, this came at the cost of supporting replays recorded in the old version of the game.

Since we don't want to wipe the leaderboards (as no gameplay elements have changed in a way that would invalidate them), we've opted to keep the leaderboards intact, and made a legacy version of the game available to watch these old replays. This legacy build can be found in the Betas tab, after right-clicking on Chippy in your Steam library, and selecting Properties. This new legacy-v56 branch will allow you to play the pre-Workshop build of the game, including watching replays from that version, but we've disabled submitting new high-scores from that build.

New Achievements
Our final new feature in this update is a bunch of new Steam achievements, mostly geared towards experienced players. These seven new goals all involve carrying out daring displays of expertise against seven different bosses from the original campaigns: 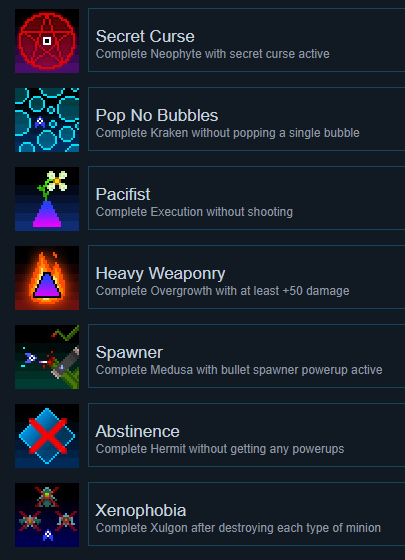 Join Us On Discord!
As always, you're welcome to join Chippy's community on Discord[discord.gg]! That's probably the best place to get in touch with us if you encounter any bugs, and it's also a great resource for discussing strategies. We'll also be around to answer any questions about creating custom levels, and you'll be able to get feedback from the community on what you create there too.

For any expert players that can attain all gold medals on one or both of our official campains, you can be granted the Gilded Crusader and Gilded Invader roles to show off your prowess.

What's Next?
Besides continuing to patch any problems that come up relating to the new Workshop update, we'll be continuing work on a Switch port that should hopefully be ready in the next few months. Any new features we introduce for that version will also be added to the PC release. Along with that, we're hoping to put out a few more new "official" Workshop levels like Crossfire for you to try. 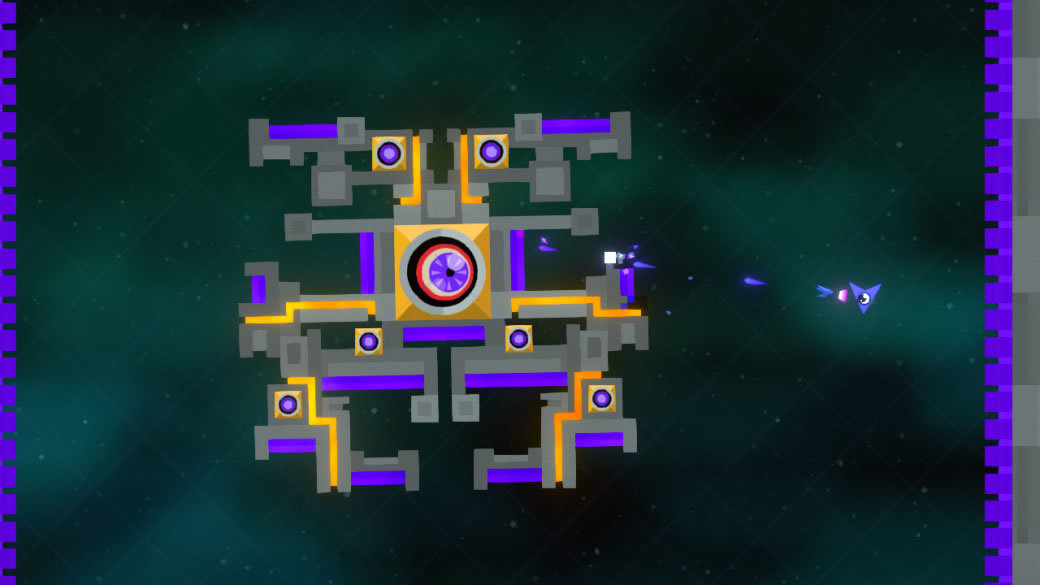 This update adds the ability to bind items to individual keys, along with some fixes and improvements. We're also making good progress with our new Endless levels, writing documentation for building your own custom workshop stages, and starting work on a Switch port.

Item Binding
We've gotten a lot of feedback about it being challenging to select a certain item in the heat of battle, so we hope this feature helps.

In the pause menu, navigate to an item using the controller, press A to enter binding mode, and then press one of the dpad buttons. Pressing that button in-game will now swap to that item.

More than one item can be bound to the same button - hit that button multiple times to cycle through them.

For mouse & keyboard, simply select an inventory item and press a number key from 0-9. Press the same key again to clear a binding.

Once a binding has been set, it should be remembered across multiple sessions. 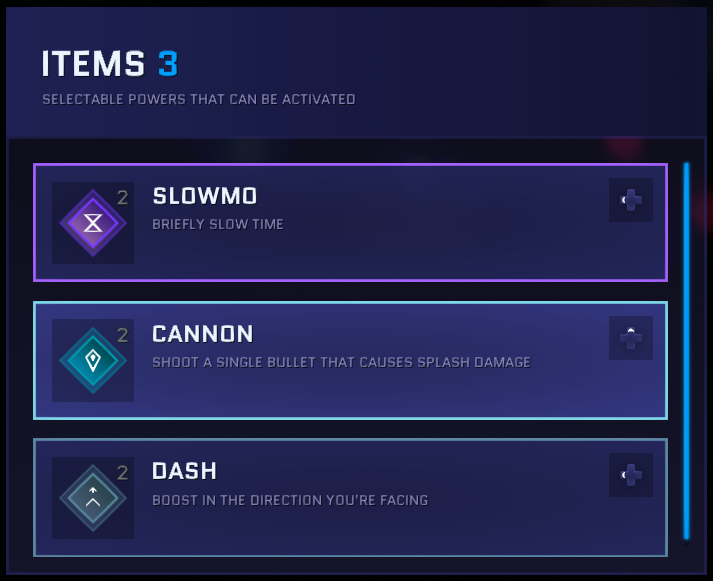 Endless Mode Progress
Our 3 brand new stages for Endless Mode are coming along nicely. Here are some teasers of ideas we're playing around with (you might need to right-click and Show Controls to play the vids):

Workshop Documentation
We've also been working on documenting everything you'll need to know to create your own stages. You'll have access to everything we used when building the levels in the game, so we're really excited to see what you'll come up with when the documentation and tools go public. 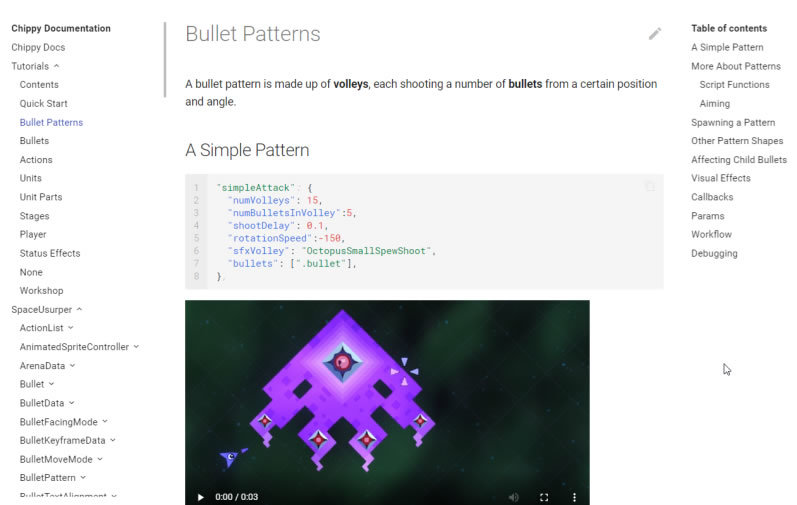 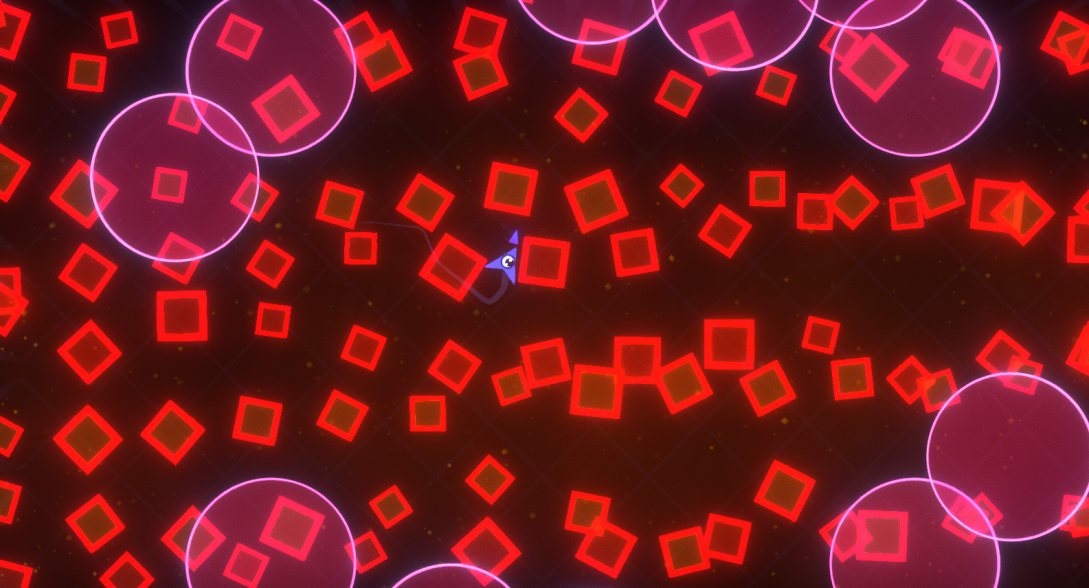 This update features a new replay management menu, from which you can browse and share any recently recorded replays. We've also greatly improved leaderboard navigation, and added percentile stats to give you a better idea of how you are ranked on each stage.

Replay Menu
You can now browse the replays recorded during your last 100 attempts of any stage, using the new replay menu. 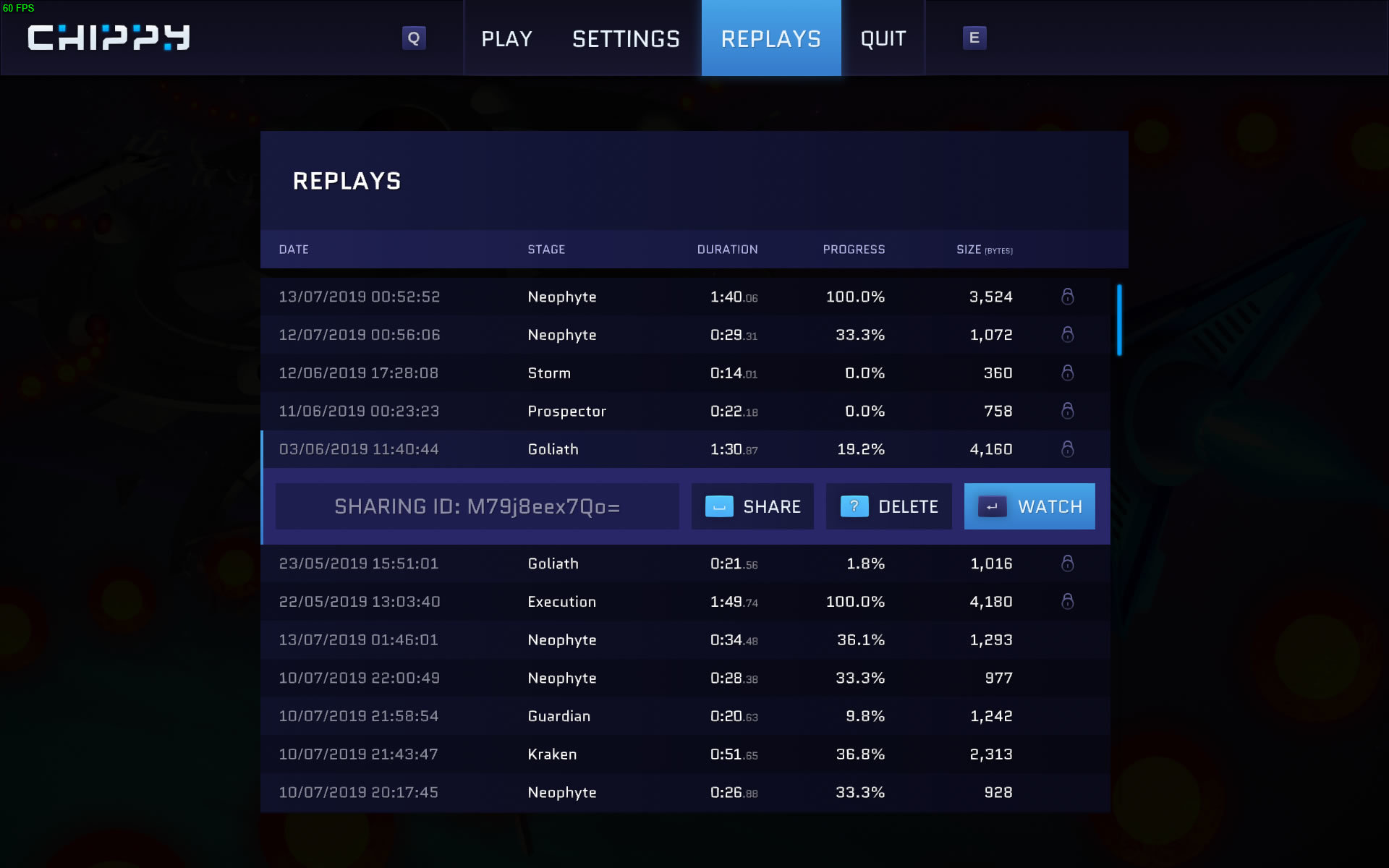 We've also added replay sharing links that can be generated from the replay menu. Clicking on a replay sharing link will launch Chippy, and start playing that replay. Additionally, tabbing back to the game while a replay link is in your clipboard will prompt you to download and watch it.

Shared replays will be locked, and won't get automatically deleted.

Percentiles
Also included in this update are percentile stats for each stage and campaign. This will tell you your relative global rank, for example if you are ranked 100 out of 500 players it will list you as being in the "Top 20%".

This should give you a better idea of how well you are doing, especially when you're not near the top of the leaderboards like the 3 players that have already beaten every single stage (for comparison, over 4,700 players have beaten the first stage). 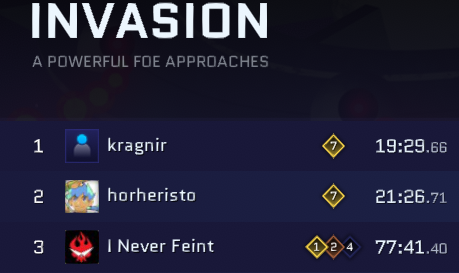 For the rest of us, we've made it easier and faster to scroll around the leaderboard.

What's Next?
The two big things we're working on at the moment are a new "Endless" mode and Steam Workshop support.

Endless mode will feature some completely new stages, and task you to survive for as long as possible against a perpetual onslaught of tougher and tougher challenges. We're currently planning to start with a campaign of 3 endless stages, each with a different style of gauntlet to endure.

Here's some concepts of the enemies you'll be fighting in one of those stages: 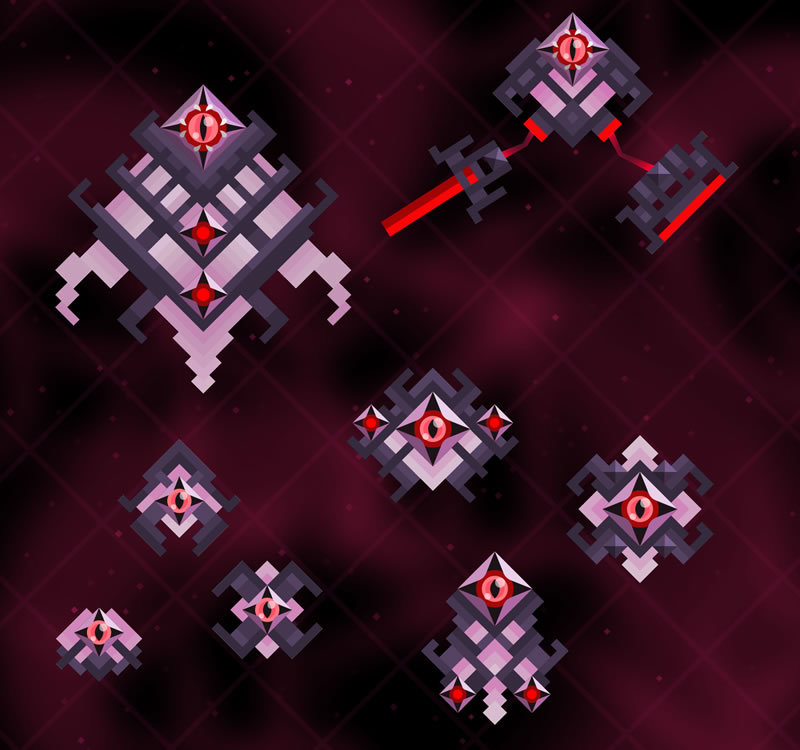 For Workshop support, our next job is to provide documentation for how to build your own stages, and later on create the UI that will let you upload and play these custom levels.