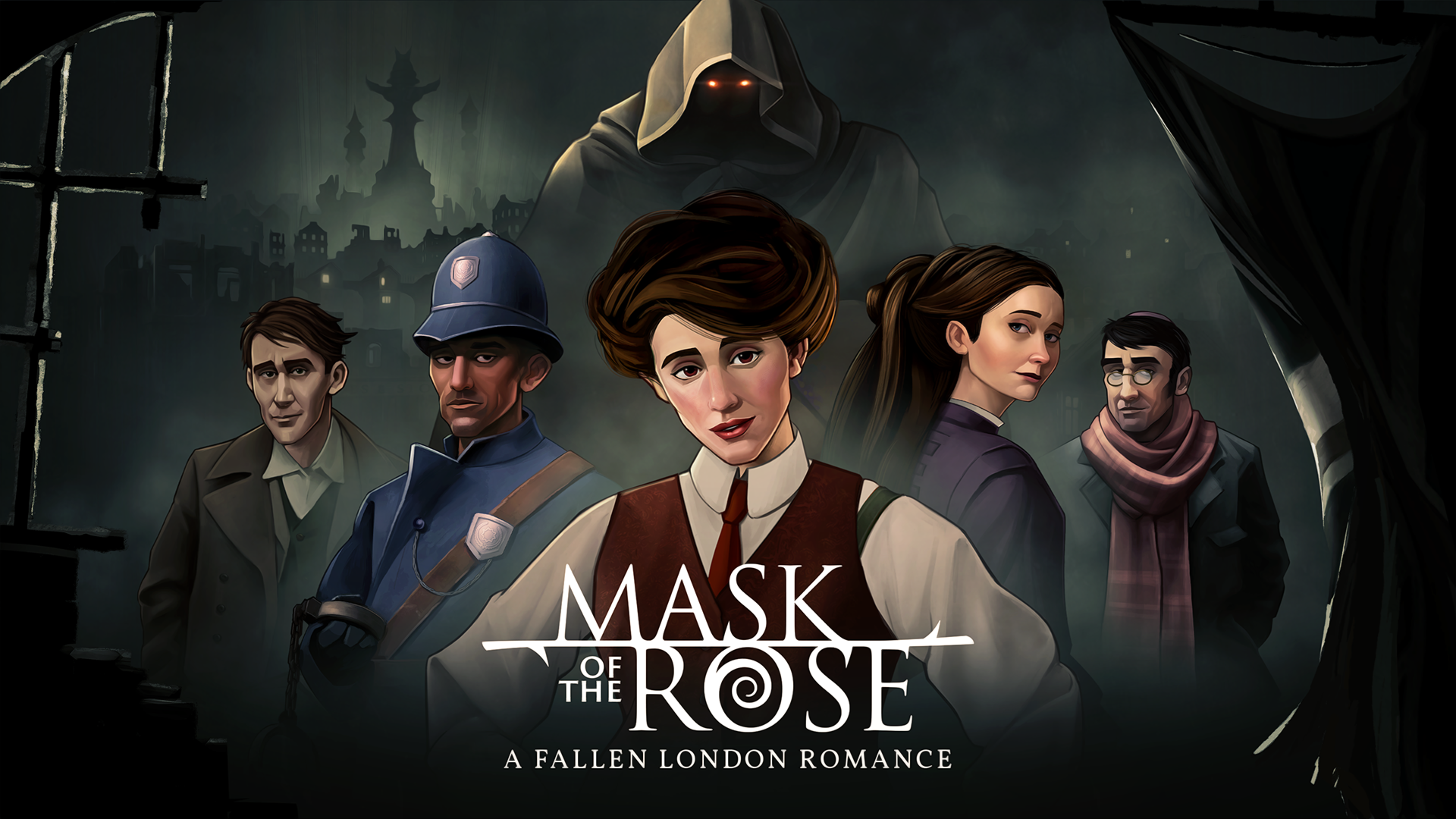 For a while now, we’ve been working on a couple of new projects. Today we’re very excited to announce the first of them!

Mask of the Rose is a romantic visual novel and prequel to all our other games set in the Fallen London universe.

Mask of the Rose takes place in 1862, mere months after London was stolen by bats. Londoners are still adjusting to life underground. The old street signs are being erased. New ministries and new festivals are being established. The mysterious Masters of the Bazaar seem to be in charge.

You share your boarding house with a few other lodgers: Archie, a medical student discovering firsthand that Death works differently here. Griselda, a close aide of the new Masters. Horatia, the landlady with a soft spot for the Neath's native inhabitants. Harjit, the local constable looking for a missing person of his own.

As you make a new life below, you may find yourself visiting the underwater ruins of Parliament; intervening in a murder trial where the victim is a witness; or steering a hooded, vocabularious Master through the subtleties of a London courtship. However you choose to live in the Neath, you have your own friendships – and your own heart – to look after.

The art of Mask of the Rose draws on Film Noir, Victorian photography and Blitz-era Britain, and is an evolution of the Fallen London universe’s painterly style, keeping the atmosphere of the original but with more detail and depth.

If you’re a fan of the Fallen London universe, Mask of the Rose offers a glimpse of events we’ve never shown before, as part of a more personal story. You will get to explore the origins of beloved characters and institutions, as well as encounter brand new mysteries. Mask of the Rose is also an excellent introduction for players just getting started with the Fallen London universe.

We’ll be running a Kickstarter campaign for Mask of the Rose in February 2021 - sign up on our Kickstarter page to be notified when the campaign goes live, and join our Discord[discord.gg] or forums to discuss the announcement!

What about Sunless Skies Sovereign Edition?
With our porting partner, we’ve submitted builds for certification on all three console platforms. This is the process in which Sony, Nintendo and Microsoft sign off on them as ready for release. We don’t know exactly how long it will take, and it’s common for certification to throw up a few issues, but this puts us in striking distance of a release!

Much of the work on the console editions is being done by an external team who’re much more experienced with porting games than we are. We're looking forward to being able to share the fixes and performance improvements they've made with you!

New projects, plural?
That’s right! We’re working on two new projects. We can’t tell you much about the other yet, but we can say that its game mechanics are very different from our past work, and that it takes place in a new setting.