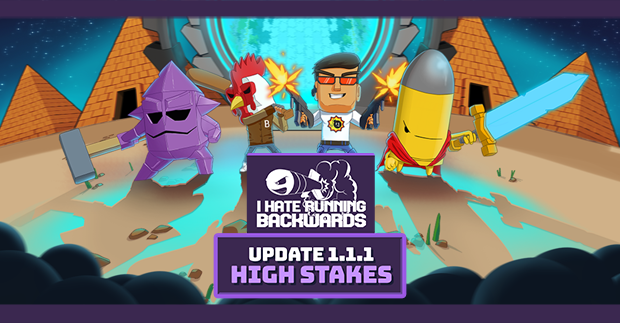 Another week, another update! This time our primary focus was on the competitive aspect of the game!

Some of you may have noticed that we have an achievement called "Hole In One!" which requires you to get the combo counter to x50, and you didn't know where the combo counter is. The reason for this was that we had to disable it as we were reworking how the combo system works.

The new combo increases for each kill the player makes. Each enemy contributes a certain amount of points to the combo. When enough points are accumulated the combo counter increases by 1. Each combo level increases the number of points the player gets for all the actions he does in the game.

There are 100 levels of the combo multiplier and at max rank, the score increase is 50%.

The combo isn't lost until you take damage, and at that point, we reduce it by 25%. So it's best to keep away from that damage if you want to build up that combo meter!

Well, of course, these aren't all the changes. Check out all the other cool features:

New Features
- Added all the assault rifle, pistol, shotgun and knife type tier 3 weapons bringing the primary weapon count to 67 up from 50
- Achievements have been added to NETRICSA
- The score is now visible throughout the game
- The combo counter was added to the HUD
- Reworked the models and animations for Rocketeers, Kamikazes, Bombers, and Firecrackers

Tweaks and adjustments
- Bull won't spawn while near shortcuts
- The boat is now more agile, also, fewer mines ;)
- Loading screen now requires player's input to start the game (so you guys can read the tips in peace)
- Arrows near the lockers now stay visible
- Fixed the error which would appear on taking a shortcut when the tutorial is active
- Fixed a bug where the helicopter would not be visible if it was destroyed in the first loop
- Collider height around the helicopter area was raised to make jumping off the platform with the broken jetpack impossible
- Added tier stars to weapons to make it easier to identify what rank all the weapons are
- Gunslinger perk now affects BonePistol weapon and Colt45 weapon
- Final Assault no longer works with BonePistol and Colt45 as they are now categorized as pistol weapons
- CrossBone weapon now consumes the amount of ammo it fires
- Rocket launcher tier 3 ammo increased to 15 up from 12
- Increased tier 2 and tier 3 Omicron laser damage to 12 up from 8
See all 5 comments
Road to the "Mega Update" patch
posted by Hans @ 06:41AM on June 29, 2018
See all 6 comments
I HATE RUNNING BACKWARDS ON LINUX!
posted by Beravu @ 08:15AM on June 28, 2018
See all 4 comments
Update 1.1.0 - MEGA UPDATE
posted by Hans @ 02:13PM on June 22, 2018
See all 4 comments
Play I Hate Running Backwards online!
posted by Zenoslaf @ 09:08AM on June 13, 2018
See all 7 comments
View all past announcements
Upcoming Events _