The World
With the ‘Blazing Deserts’ DLC we want to add more flavor and variety to the southern part of the map. One part of the recipe to achieve this is a different geography, and so we’re going to expand the world map with new lands to the very south to create one large and continuous world. These new lands are made up of blistering hot deserts, barren rocky hills towering seas of sand, and lush jungles that hug the coast. You’ll be able to reach them both by traveling as far south as your feet can carry you, or by taking the sea route from a northern port town. 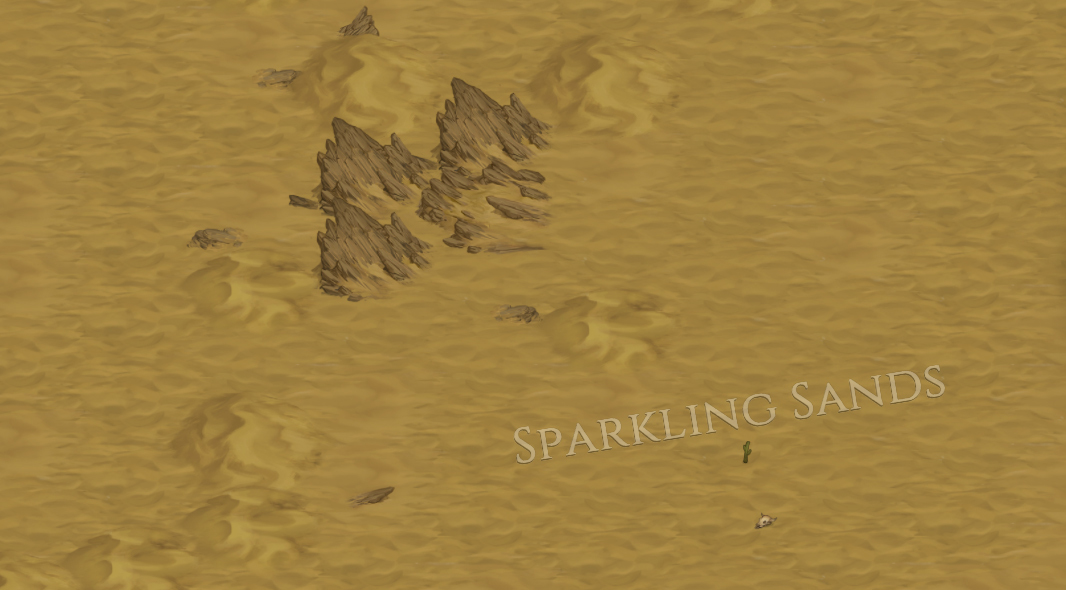 Even though the world is going to be larger, frequent auto-saves in ironman mode will actually become faster thanks to some parallelization.

Combat
The new sand is about to turn red with blood as these new types of terrain will of course also make an appearance during combat. Behold the desert.

An oft-requested feature for Battle Brothers is to portray any location that you’re fighting at, such as a graveyard or a brigand camp, also on the tactical combat map. Fighting Wiedergängers between fallen tombstones and not just on empty plains can add a lot to the atmosphere and flair to that tight battle that will decide the future of your company. We’re happy to announce that with the ‘Blazing Deserts’ DLC we’ll introduce a wealth of new location-based environments in combat to make possible just that. 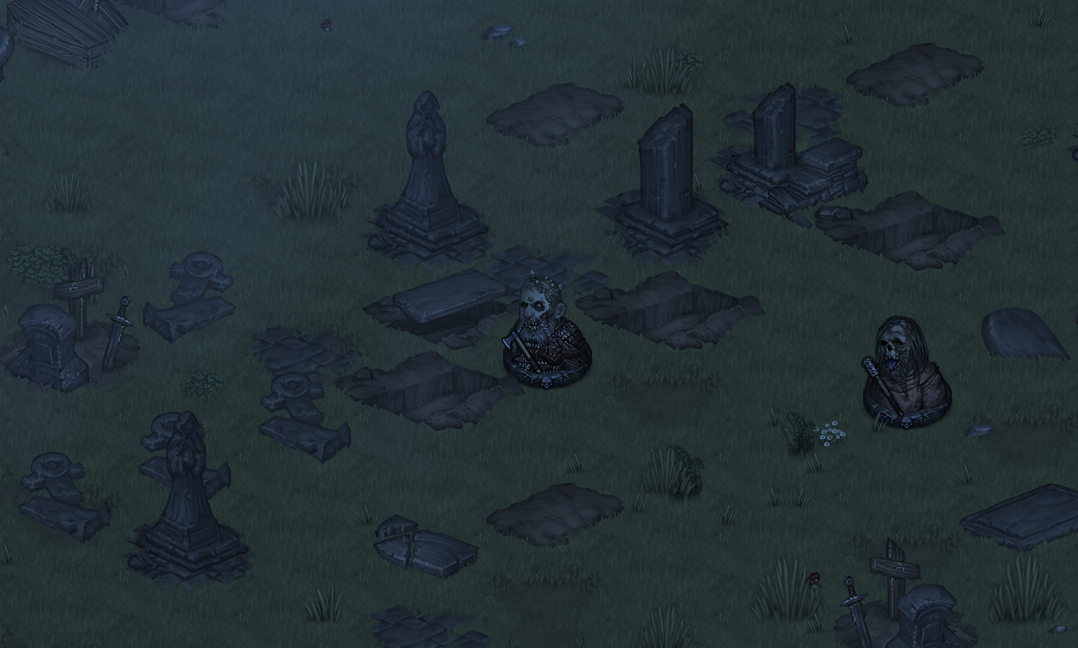 The combat system of Battle Brothers – one of its strongest features, as most of us will agree – was designed for small scale infantry combat on open or mostly open maps, and that’s where it works best. Having the odd fight in more enclosed environments, such as in forests, can shake things up every now and then in interesting ways, but doing this too much can also wear on a player’s patience. For example, the initiative system that works well in open field battles can become frustrating in tight quarters where 12 or more characters are constantly blocking each other. So with that in mind, let’s talk about how environments based on location are going to work.

Fighting brigands at their base camp will bring a dynamic to combat that is different from fighting them in the open field. That’s a good thing, because it adds more variety to combat in general, and because it adds another strategic dimension to the world map where you’ll now have to weigh the pros and cons of luring an opponent out of their base or fighting them at home. But while there’ll now be walls, palisades and gravestones shaping some of the maps, we also won’t turn every attack on a brigand camp into a siege, or a fight in a dense forest of tents and barrels. It’s not what the combat system was designed for, and consequently it just wouldn’t be fun. All combat will still take place outside, and most location-based objects are in fact cosmetic, meaning they’ll provide a flavorful backdrop and tell a story of where you’re fighting, but they won’t get in your way and won’t block your men from moving. On top of that we’ll be adding a smaller selection of objects which actually do block tiles to change the dynamic of combat in a controlled way. For example, a brigand camp may be surrounded by palisades to create chokepoints, but there’ll be also enough open space both outside and inside to have a proper battle.

While we take care to make it visually apparent which objects block a tile from being entered, and which objects are merely cosmetic, we’re also aware that it won’t always be intuitively readable for everyone and in every situation. Again, it’s a problem that you may have already encountered when fighting in the woods. To alleviate this issue, we’re introducing a new quality of life feature with the free update that comes along with the DLC. You’ll be able to toggle at any time to have highlighted in red all tiles that are blocked by environmental objects, such as trees, by pressing a button on the top right or by pressing a hotkey. Useful for navigating those new environments and any forest alike.

Join us again next week for a very special announcement regarding Battle Brothers!

The focus of the DLC will be on expanding and enriching the existing world with a new land of burning deserts and lush jungles to the south. Across these lands you’ll find a unique culture loosely based on historic Arabian and Persian cultures of the medieval ages built atop the ruins of the Ancient Empire in the world of Battle Brothers. You’ll find new lore and a different political system, equipment not seen anywhere else, and fresh contracts to earn your stay with. There’ll be a new late game crisis, new legendary locations and several new beasts roaming the wilds. This DLC will be our biggest one yet for Battle Brothers. 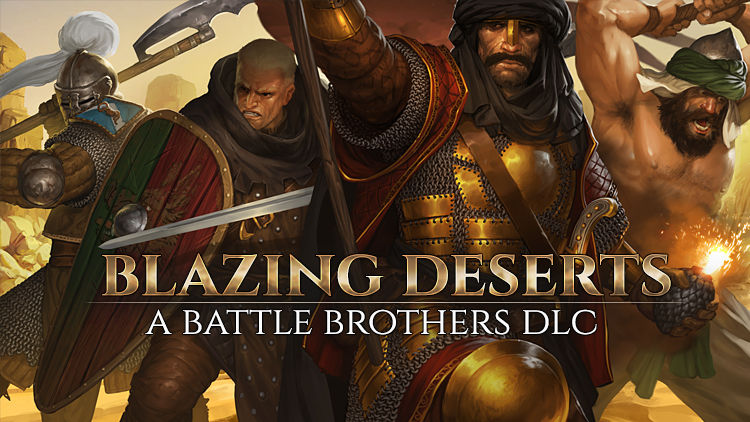 Here’s the rough list of features we’re aiming for:

In addition to these major features, the DLC will also include countless smaller additions. Just like in the past, we’ll explain all major features and most minor ones in detail in future dev blogs as we go along, so you’ll always know what we’re working on and why. We expect to be finished sometime in Q2 of this year and will announce a release date and final feature list once we’re closer to the finish line.

Alongside the DLC, which will not be free, the game will also receive a sizable free update again. This update will contain a whole bunch of improvements, quality-of-life features and balancing changes, as well as some minor content additions.

Join us next week for our first dev blog on the new DLC!

Where the sun reigns eternal, burned to cinders and reborn from ash, fire shall lead the way once again. 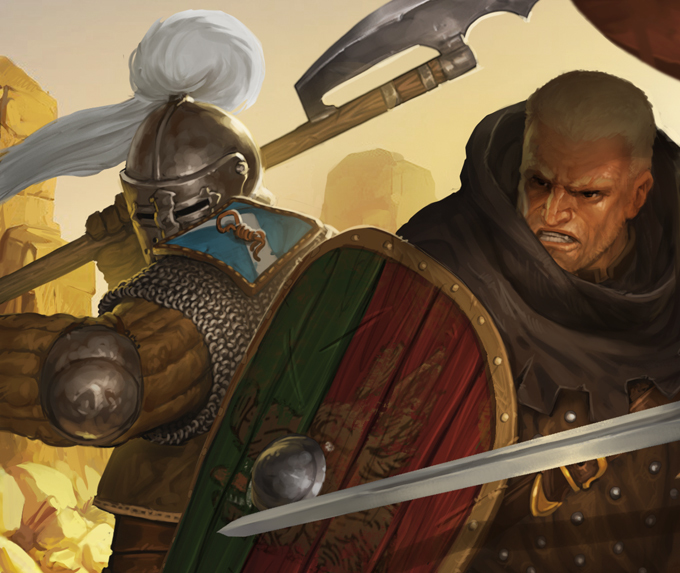 Read all about it in next week’s announcement!

We’re back from vacation with a rework of everyone’s favorite opponent, the Alp.

Why do a makeover? The intention is to have Alps provide unique encounters and challenges with a puzzle-esque element that is solved differently each time, unlike with the first iteration of Alps, while also be fun and without the tedium that now plagues the second iteration of Alps. All while staying true to their lore.

What’s changed? Alps now work like this: They no longer spawn any shadows. Instead, they attack themselves at medium range. They get a unique passive ability as well as two familiar spells, each with two tiles range, and any combination of the two can be cast per turn.

Their ‘Sleep’ spell will inflict the ‘Sleeping’ status effect, which works similarly to ‘Stunned’ in that a sleeping character is unable to act. However, sleeping characters can be woken by adjacent allies, just like you can free adjacent allies from webs, and using the ‘Rally’ skill wakes up every ally within 4 tiles as well. The effect of the spell can also be resisted in the first place with a successful Resolve check. Finally, after 2 turns (or 1 with the ‘Resilient’ perk), characters wake up on their own again.

Unique among all opponents in the game is the new passive ability of Alps, which works like this: Each time any Alp receives damage, all Alps on the battlefield, with the exception of those stunned or rooted, shuffle to a different position within 2 tiles range of your men. In other words, each attack on an Alp will change the look of the battlefield and will have you reevaluate your priorities, which mirrors how they’re besieging your mind in the lore.

What does all of that mean? Fighting Alps is now much quicker, it’s different each time, and there’s much less incentive to strip everyone naked before each fight because fatigue is not the deciding factor. The strength of Alps also scales less with their numbers, which makes them viable opponents from the early game until the late game. They’re not the most dangerous opponent in the game, but they can and probably will kill some of your men.