Additionally we’ve temporarily added the Volcano Spinosaurus skin to everyone’s default inventory pending our smoothing out of inventory issues on the backend. Those of you who have already received your skin will temporarily see a duplicate skin in your ingame inventory.

Note: the first balance update will be coming within the next week. We’re still collecting data from matches and we want to handle stability updates before making any significant balance changes. We’re definitely reading your feedback in the mean time!

See all 61 comments
Day One Dev Diary
Dec 4, 2014 @ 9:06pm - Squid Meier's Civilization 666
Hey, all! We hope you’re all enjoying Primal Carnage: Extinction so far. We just wanted to do a bit of a Day One post-mortem and kind of explain the highs and lows of our first 24 hours post-launch.

What Happened? Why am I on fire?
One of the major things we’ve been working on adding in Primal Carnage: Extinction is Steam Economy support. With Steam Economy, players earn items in game including dinosaur skins, human weapon skins, and other cosmetic items which they can trade or sell on the marketplace.

When our initial build became available to players, our Economy Server was completely overwhelmed by the traffic from players and game servers making calls to it. As a result players immediately encountered issues with their in-game inventory not reflecting their Steam Economy and our servers crashing after failing to receive information that they needed from the master Economy Server. This also created increased lag and severe framerate drops.

One of the advantages of utilizing Early Access was our ability to test our infrastructure in an environment with large amounts of players. We don’t have the resources that large AAA developers will have to stress test this stuff internally, so we are very thankful for everyone jumping in and playing Extinction from day one. We didn’t expect the volume of people so keen to play the game so quickly, which contributed to our servers struggling so much.

So, how did we fix it? How was the fire put out?
Our developers immediately got to work coming up with fixes for the critical issues. Already tired developers worked through the night to improve build stability and solidify our servers and optimized our requests so that we could withstand the traffic that we were receiving. We didn’t want to leave the build in a state that would be broken, so we marathoned through the night to make sure that our players had a stable build to test by morning. In less than 12 hours, we managed to put together a new build and a solid changelog to fix as many player issues as possible that were logged from the first few hours of release.

We have received amazing feedback from players on our forums in reporting bugs, along with our team of dedicated volunteers working in Quality Assurance. All of your responses have made the Early Access process go even better than expected, and your continuing support will help create the best Primal Carnage: Extinction for everyone.

DLC migration, where did my stuff go?
One side-effect of the initial network instability was that items were sometimes incorrectly duplicated for a short period of time as part of the DLC migration and a small group of people who connected to the Economy during a certain window of time did not receive their content. In order to make sure that duplicate items received through glitches or exploits are removed as well as to ensure that everyone receives their DLC, we’ll be selectively removing people’s DLC items and re-doing the DLC transfer to ensure that everyone ends up with the DLC that they should have.

Stats, stats and more stats
So, one of the coolest things about our first day on Early Access is that we’ve been able to start tracking player match data for real games so that we can make decisions based on data for how to make tweaks and changes. The more people play, the richer the data becomes and Extinction will become more balanced and refined.

We thought we would provide an insight into the data we are collecting and how powerful it can be. 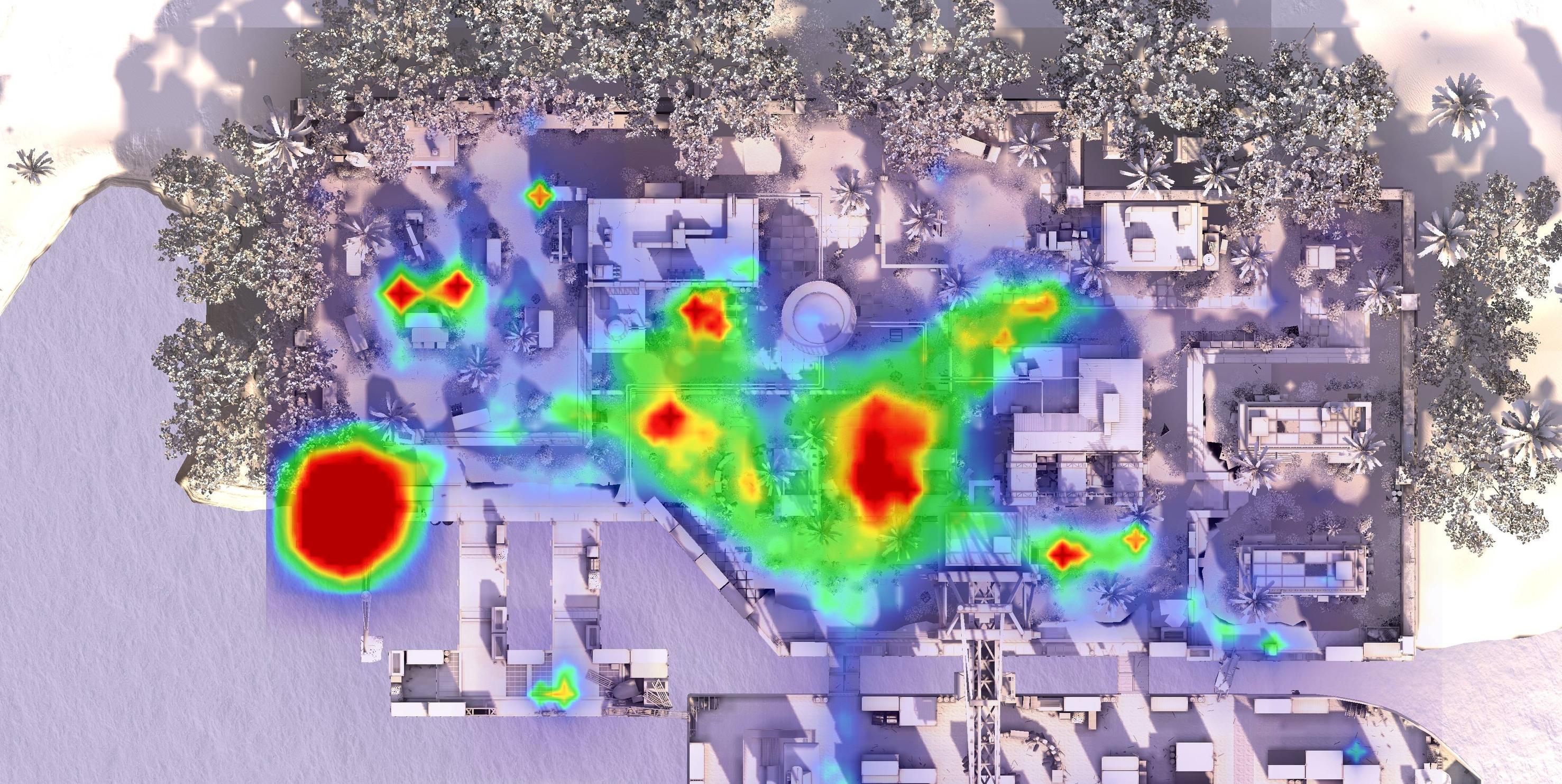 [imgur.com]
This is a heat map of where people spend their time in Docks playing Team Deathmatch. 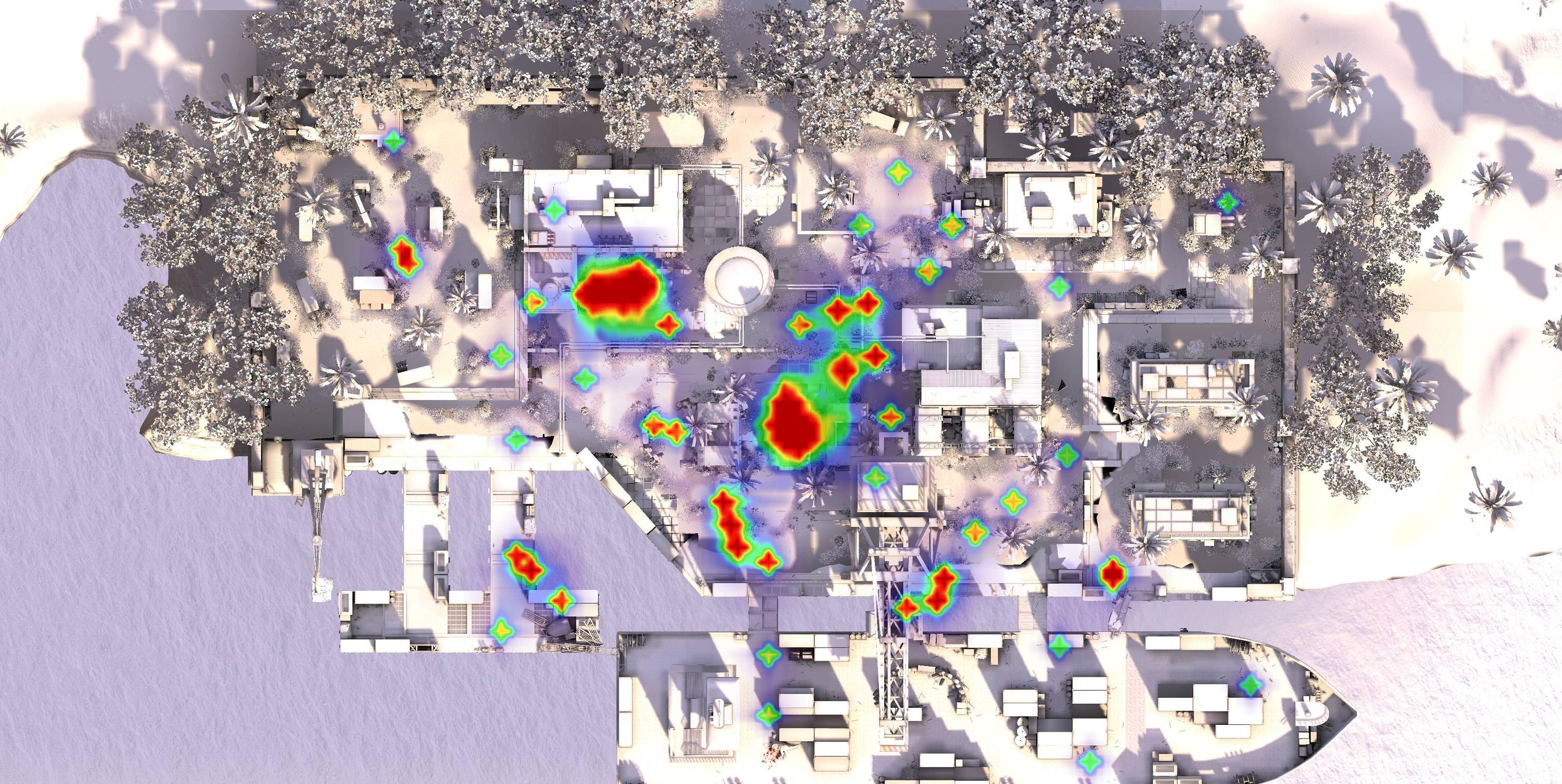 [imgur.com]
This shows a heat map of where people are dying in Docks playing Team Deathmatch.

[imgur.com]
A handful of matches worth of movement data showing the paths different classes take through Utility Base. Have a guess which color is a Ptera.

What are we doing next?
We have already pushed out a big patch, but we aren’t done yet. After a short sleep, we will continue to work on another patch to be released in the coming days. You can see the details of what are are doing in our public Trello Boards[trello.com] for both our Roadmap and Known Issues. Jump in and check out our future plans and vote on the features you most want to see!

Primal Carnage Extinction should be going live later this afternoon. We wanted to explain how the discount will work for existing owners of the game:

How much will the game cost?

Players who purchased Primal Carnage before November 20, 2014 will receive an 85% discount on a purchase of Primal Carnage Extinction (estimated $2.99 USD price after discount)

Players who purchase Primal Carnage between November 20, 2014 and the end of Early Access will receive a 50% discount on a purchase of Primal Carnage Extinction. (estimated $9.99 USD price after discount)

How long will this promotion last?

The discounted pricing promotion will last through February 2015.

Will all my DLC from Primal Carnage carry over to Extinction?

Players who purchase and launch Primal Carnage: Extinction before the end of February will get all their old DLC from the first game added to their PC Extinction inventory.

• Note: After installing PC Extinction any new DLC purchased for Primal Carnage will NOT be added to the player’s Extinction inventory.

Thank you for being a loyal fan and we hope you enjoy all the new things that makes Primal Carnage: Extinction the definitive dinosaur experience.