If you liked this game, we would gladly accept you into our Paradox family! We are a nice bunch, and we hope to see you on our official forums![forum.paradoxplaza.com] Maybe you will find another game of ours that would be to your liking if you pay us a visit?

Thông báo _
Development Diary: New Missions for Ajuuraan and Ethiopia
được đăng bởi PDX_MordredViking @ 09:17AM on September 21, 2021
Hello and welcome to the 3rd Dev Diary for the content of the Sub-Saharan region. Today we shall take a look at the Horn of Africa - at Ajuuraan and Ethiopia to be more precise.

We start off with Ajuuraan as they have the smaller mission tree. Ajuuraan is one of the Somali clans in the Horn and is known for its impressive irrigation system, for its unique position as a theocratic clan state, as a trading nation, which had its merchants active in India and Asia, and even as a winner against Portuguese aggression. The mission tree for Ajuuraan reflects these traits, focusing on both the military strength and the trade power it possessed. 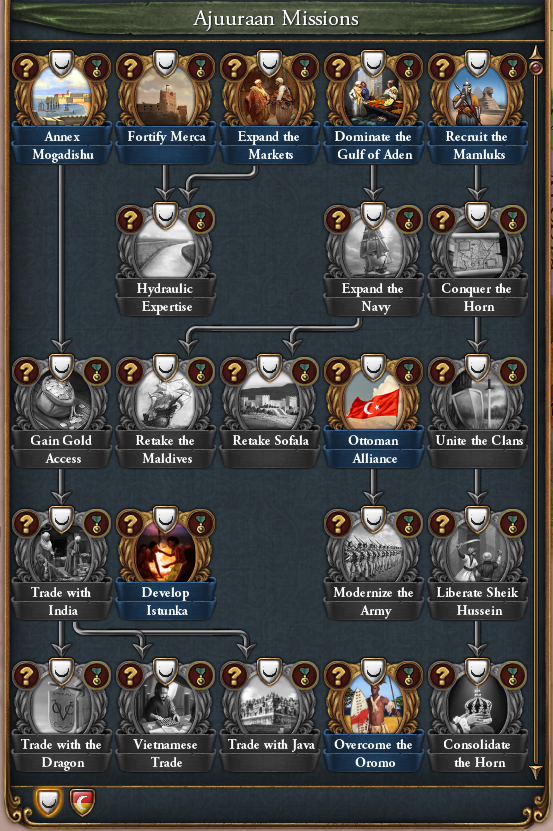 The most left row focuses on the trade aspect of Ajuuraan. A theme of this row is the importance of Mogadishu as a center of trade and its minted currency. After annexing Mogadishu you get access to the "Gain Gold Access" mission. The requirements of it seem easy enough: just have a gold province. However, the mission can also be completed diplomatically by allying and having 100 opinion with a country which happens to have a gold province. If you finish the mission diplomatically, your ally will receive an event, which will ask them to supply Ajuuraan with their precious metal. They either can choose to refuse, giving mercantilism for the ally, or accept the deal, reduce their own Global Trade Power by 5%, but increase Goods Produced by 5% and reduce the inflation by 0.05 for 25 years.
In exchange, Ajuuraan will receive an acceptance or refusal event. In case of acceptance you get 0.25 years worth of income, increased Global Trade Power by 10%, increased Trade Power Abroad by 25% and increased inflation of 0.05 for 25 years.

The Trade Power Abroad might seem a little bit off, but it will come in handy for the next mission "Trade with India", where you need to have 5% Trade Power in any of the Indian trade nodes. Achieving this mission will trigger the "The Merchants of Ajuuraan" event for all countries which have their capital in India:

Note: The AI will always expel your merchants if their attitude is either outraged, hostile or rival to you.
Additionally, Ajuuraan gains in every Indian Trade Node, where they had at least 5% Trade Power, +10 Trade Power for 25 years too.

Afterwards your trade row branches into three directions, where you need to have an active merchant in Beijing, good relations with Dong Kinh and have 5% trade power in Moluccas. My personal favorite is the event for the Emperor of China when you finish the mission "Trade with the Dragon": 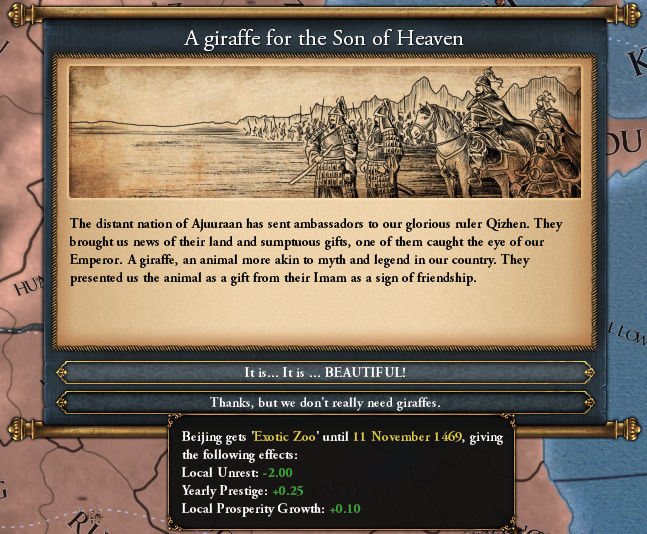 Note: a proper event picture is currently work in progress by our great artists. The picture you see right now is just a placeholder.
All the trade missions interact with the countries in their respective trade nodes while the rewards for Ajuuraan itself are more moderate like cash, mercantilism and monarch power.

The right side of the mission tree is more focused about the military and the conquest with the end goal of consolidating your region. They are quite self explanatory, so I will show you how the end result of all the conquest missions should look like if you only take the claims from the mission tree.

While I am at it: we did not forget to use this opportunity to showcase one of the formables we will add with the patch: 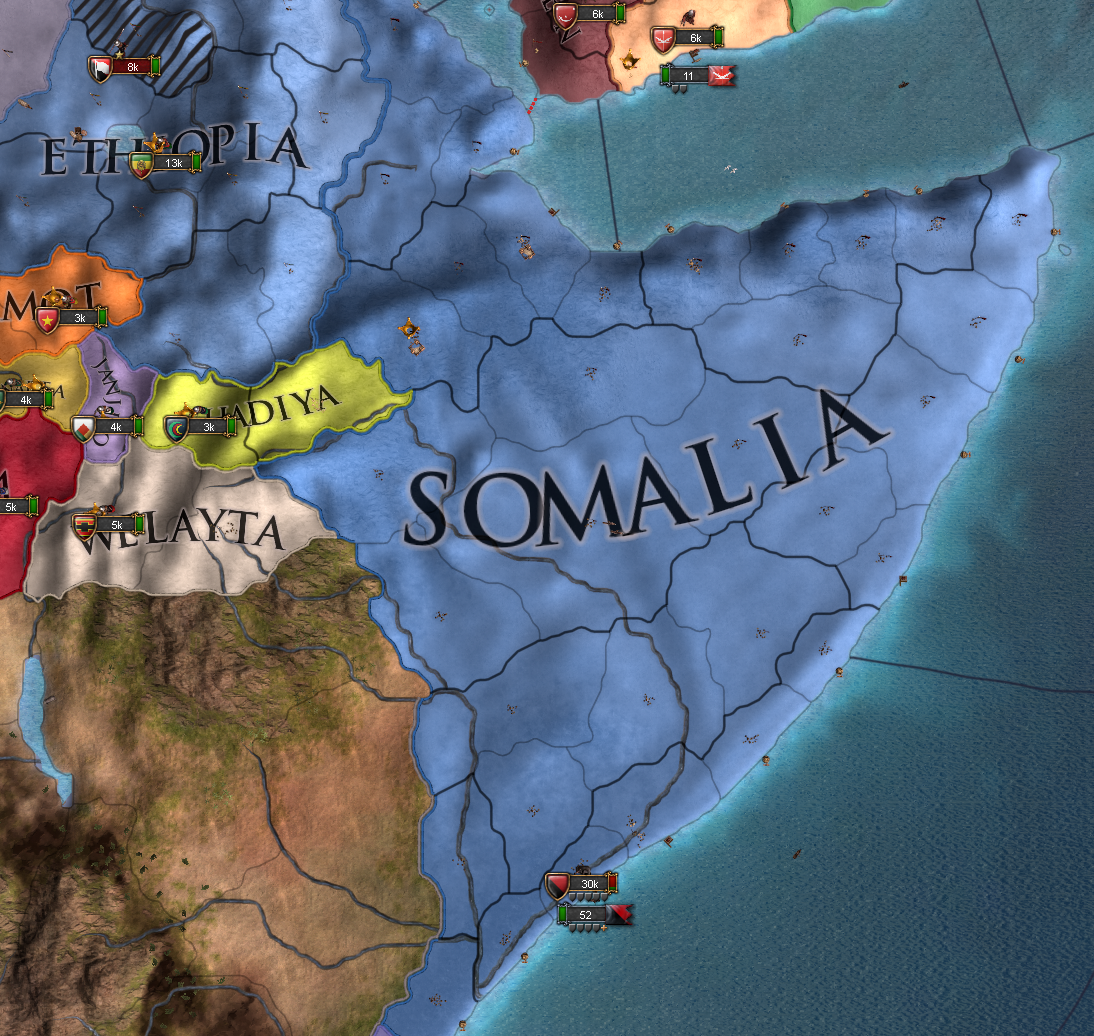 Note: Final color might change later as Somalia's blue clashes too much with Ethiopia's blue.

Finally one last thing: Ajuuraan is well known for its hydraulic constructions, which they used to enforce their power in their provinces. To represent the importance of these wells and the Ajuuraan efficiency in creating them, the mission "Hydraulic Expertise" grants Ajuuraan the estate privilege "Hydraulic Rights": 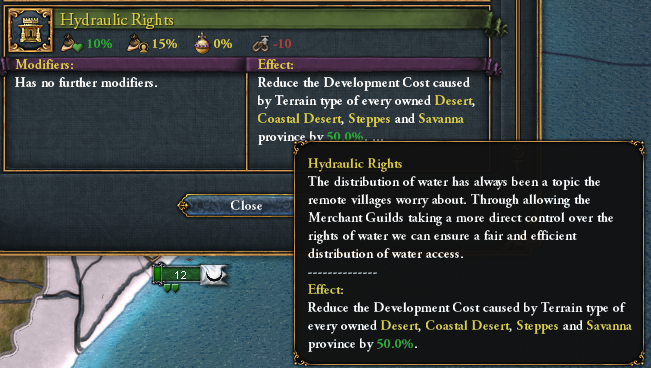 With that said, let's move on to Ethiopia, the empire of the legendary Solomonid dynasty.

The mission tree of Ethiopia has basically 3 major parts: the Liberation of the Copts in the Middle East, the legacy of the Aksumite Empire and the contact with the Europeans.
Let's start with the most basic one: the rightmost missions, which are about the Aksumite Empire and surpassing its old territory. These missions are quite conservative as they give you permanent claims over the whole Horn of Africa eventually and even some permanent claims on Arabian provinces, which are part of the Gulf of Aden trade node. The "Centralize the State" mission is more interesting though, as it requires that you reach the 6th tier of the government reforms or that you abandon your starting government reform. 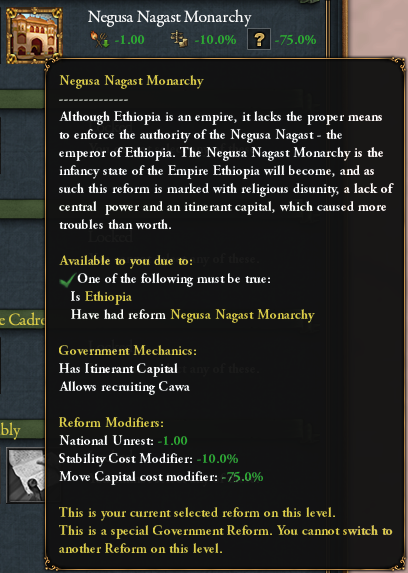 And well, I have to give credit where credit's due. The Itinerant Capital mechanic and the Ç̌äwa regiment (the game doesn't like the Ç̌, so we had to settle with "Cawa") are heavily inspired by ajsieg (from the Forums).
Around the start of the game, Ethiopia will receive the following event, explaining the starting situation and the drawbacks of their moving capital system: 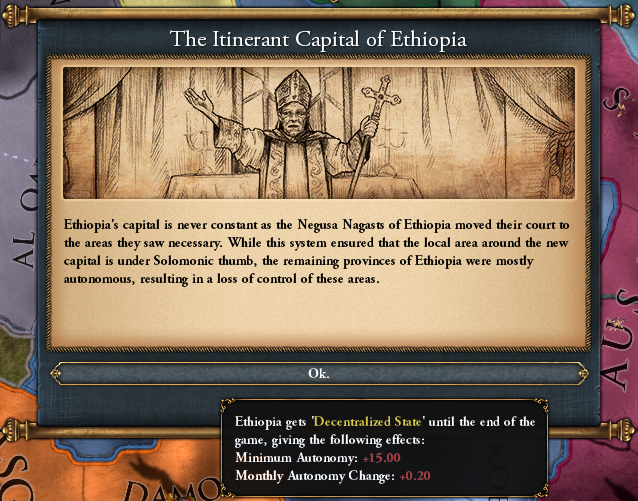 To combat the issues caused by this modifier, the Itinerant Capital has a special mechanic attached to it: provinces of the capital area always have the following modifier. 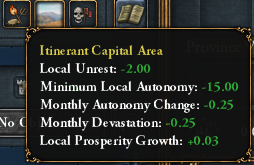 It should also be mentioned that for 5 years after moving your capital you get +1000% Move Capital cost modifier, so make sure you make the best out of it.

To get rid of this nasty modifier you have to complete the mission "Centralize the State", which fires the following event: 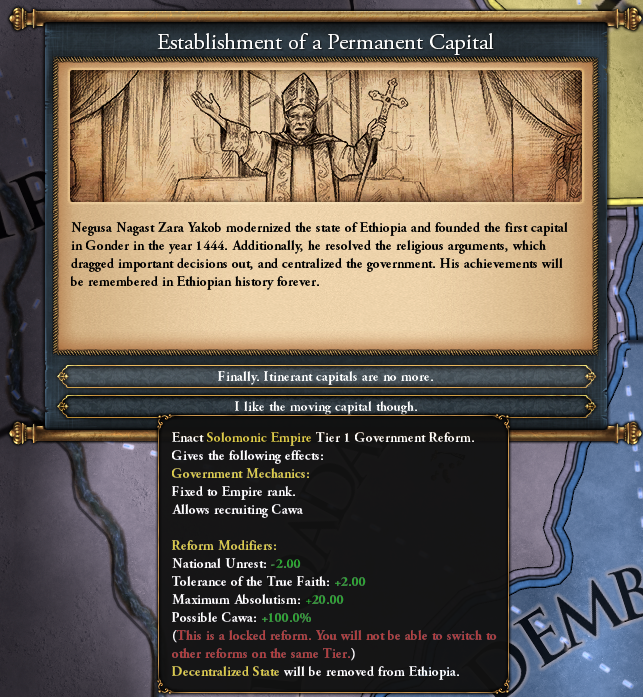 Of course you can choose to keep your current government reform. Both cases will remove the modifier and you can later choose to switch to the Solomonic Empire.

Ethiopia history has a lot to offer, and as such we couldn't forget the legendary war between Adal and Ethiopia, which almost brought doom upon Ethiopia if it wasn't for the Portuguese. As such we tried to recapture it with a few flavor events for both Ethiopia and Adal.
Now, here is the deal though: The Ottomans, the ally of Adal during this war, look usually like this in the test runs

Because of this limitation + the usual tendency that the Iberians won't reach Africa we have decided to recapture the spirit of this war through military aid in the form of mercenaries.
For Adal that means they get the following events should they be at war with Ethiopia while the Ottomans exist 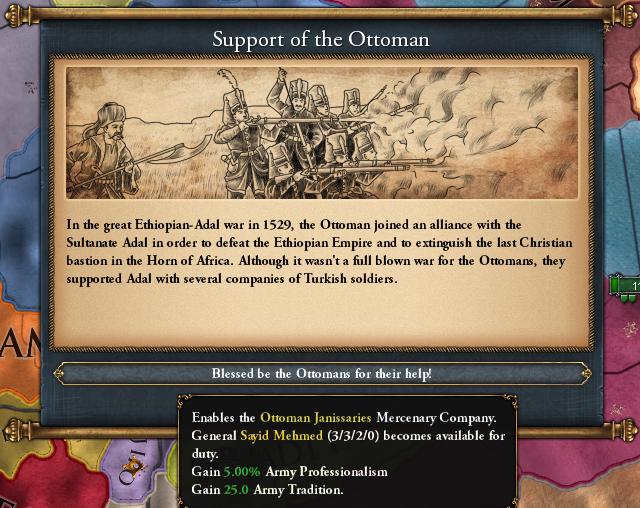 Around 2 - 5 years later, Ethiopia receives the help of the Portuguese - if they are still alive that is 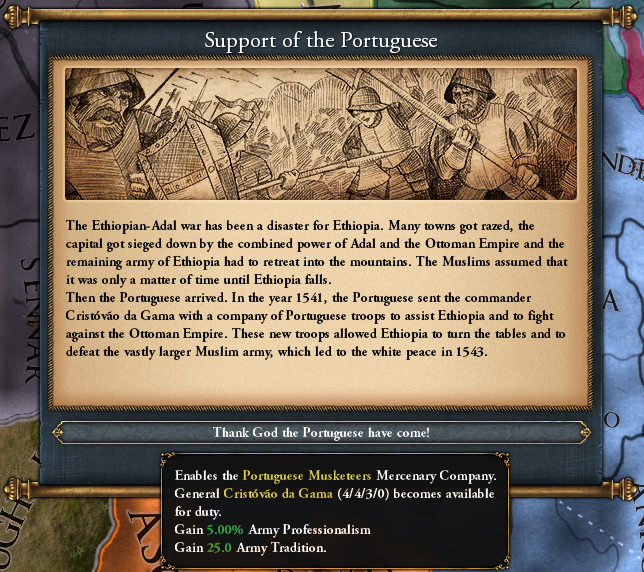 The Janissaries have -10% Shock and Fire damage received, while the Portuguese have +5% Discipline and +10% Infantry Combat Ability. Both merc companies are a little bit cheaper than the usual mercenaries, so it is advised to use them.

Speaking of units: the second mechanic Ethiopia receives are the Ç̌äwa regiments. Right now you recruit them in your states like Janissaries, but without the requirement of being limited to heathen provinces. The amount of Ç̌äwa you can have is dependent on the development of your provinces, which is about 0.125 regiments per development (+ some other modifiers).
Recruiting one regiment costs 10 Mil Power right now (value might change later on). 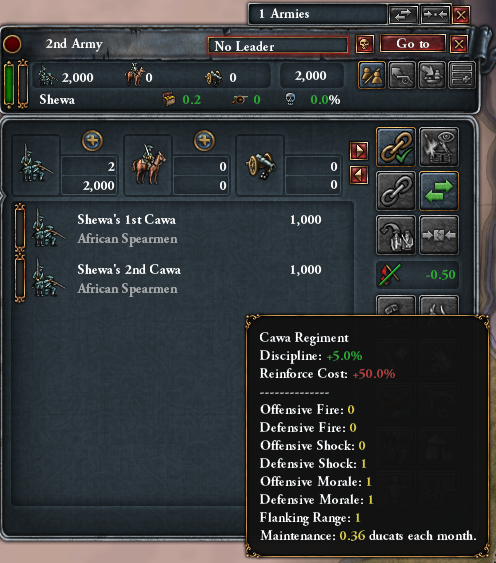 Figures for the Ç̌äwa and their privilege are not final, we're still waiting on some more modifiers which will give me more options to fine-tune them. Also, we are not entirely sure what color we want to give them just yet, so they are blank for now (I personally considered yellow for their color as it is part of the Ethiopian flag + it is free to take). I am open for suggestions though.

Other highlights of Ethiopia:
Before finishing the Dev Diary for good, let's look back at West Africa for a moment: After doing some research, we took some suggestions from the forums done after the last DD, so we have been working on a rework of starting setup (although with no new provinces, as you already know).

The Mossi Kingdom has been split into 3 realms now: Yatenga, Fada N'gourma (also known as Gurma) and Wagadugu. Additionally, the ahistorical state of Macina has been annexed by Mali, although we're working on a better balancing of this area, as Mali may be a bit overpowered with this extra provinces. Also, on every Bambara province there is now a Segu core. The event "Emergence of the Fulani" allows you now to switch your country to Fulo and the event "The Ashanti" allows you to switch your country to Ashanti.
Also, Songhai's decision "Focus on a Professional Army" now costs 75 mil power instead of 200 per ruler and the Songhai mission tree has seen some QoL changes: 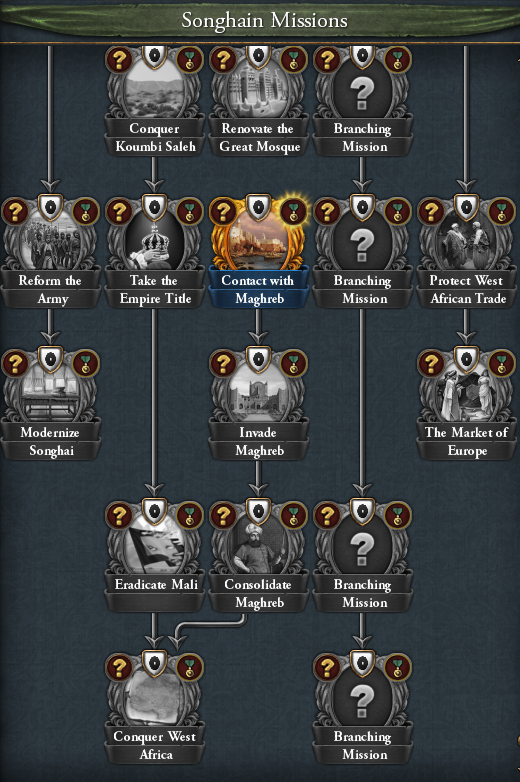 By hovering over the triggers and effects you can read what the eventual branches would request of you if you select any of the two paths.