If you liked this game, we would gladly accept you into our Paradox family! We are a nice bunch, and we hope to see you on our official forums![forum.paradoxplaza.com] Maybe you will find another game of ours that would be to your liking if you pay us a visit?

Ogłoszenia _
Development Diary: New Missions for Songhai
zamieszczone przez PDX_MordredViking @ 06:48AM on September 14, 2021
Hello and welcome to the 2nd Dev Diary for the content of the Sub-Saharan region. Today we will continue with West Africa and take a look at Songhai.

Songhai is the militaristic powerhouse, which will replace Mali as the dominant power of West Africa until its end through infightings for the throne and at the hands of the Moroccans invading from the North. As a result of that, the mission tree of Songhai focuses on militaristic advancement, the conquest of West Africa and the expansion into Maghreb (basically turning the tables on the Moroccans).

The second and third columns are classic conquest missions. Although I like to avoid pure conquest missions, they are inevitable for a country which is famous for its militaristic expansion.

With that said, the second column focuses on the conquest of the western territories of West Africa until you knock at Mali’s doorstep. The mission “Take the Empire Title” requires you to be a stronger power than Mali by having a bigger military, more prestige, higher stability and more Power Projection than Mali. As a reward you gain the Empire title and a permanent claim on every province owned by Mali or its subjects.

The third column focuses more on the “miscellaneous” conquest targets such as the tribe of Air, the Maghrebi of the North or the important Center of Trade Jenné (I call them Jenné here for consistency sake with the game). Speaking of which, if you are at war with Jenné and siege their capital down they get an event asking them to try for a white peace through a marriage. If they decide so, you as Songhai get the following event: 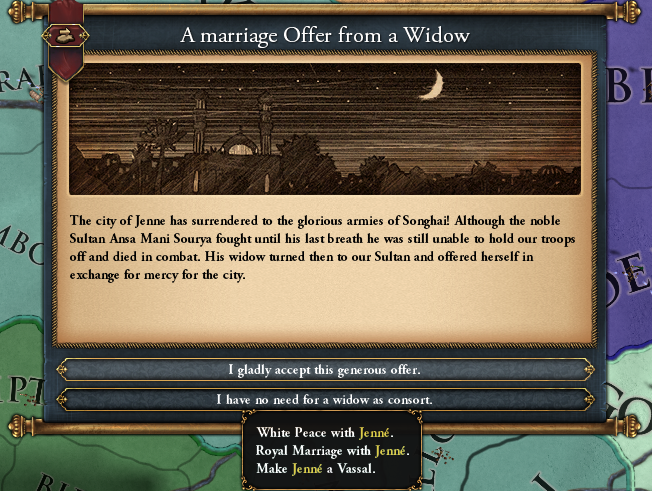 This event is a reference to the peace Jenné gained through the marriage of Sonni Ali with the widow of the deceased ruler of Jenné. Songhai would also get a consort if they have not the Iqta reform active too.

With the mission "Contact with Maghreb" you gain the first claims on Maghreb and over the course of the two following missions you will conquer Maghreb.

Someone might now wonder why the fourth column looks so empty though, and there is a good explanation for it. If you finish the mission "Eliminate the Mossi Threat" you get the following event: 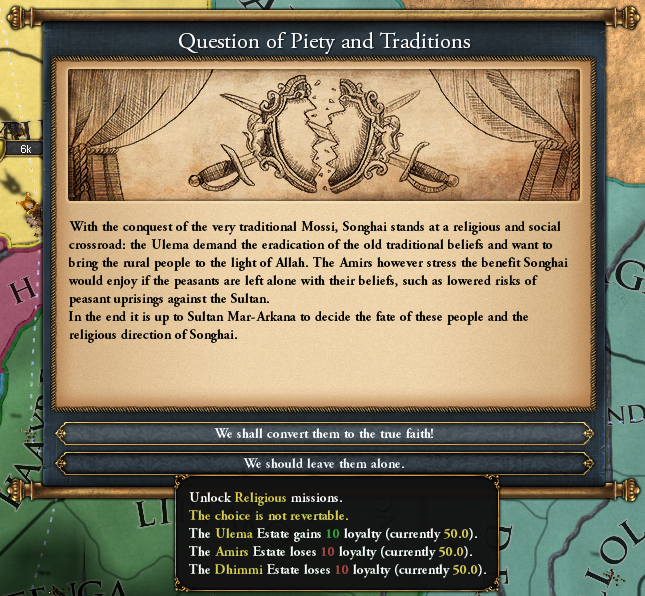 You have the choice of either converting the traditional people of your country or tolerating them for who they are, and even become their protector. Either choice will unlock a different set of missions you can pursue. Unlocking the religious missions gives you access to these ones:

The highlight of the religious missions is the mission "Invite Scholars" as it requests you to have invited any religious school scholar. The reward is that the invited scholar becomes a "resident of your country", which means you can always invite the scholar without having the need of a diplomatic relation with a country of the scholar's school (that was quite the mouthful...). "Convert West Africa" is quite self explanatory which is converting all of the provinces of the Sahel, Niger and Guinea regions (you are NOT required to convert uncolonized provinces though). The reward is a little bit unusual: every country, who has the "Same Religion" opinion modifier of Songhai will now also get a permanent increased +25 (value might change) opinion of Songhai - as long Songhai is in the Muslim religious group. Additionally, it gives permanent +1 Tolerance of the True Faith.

Meanwhile, the path of tolerance has these missions for you: 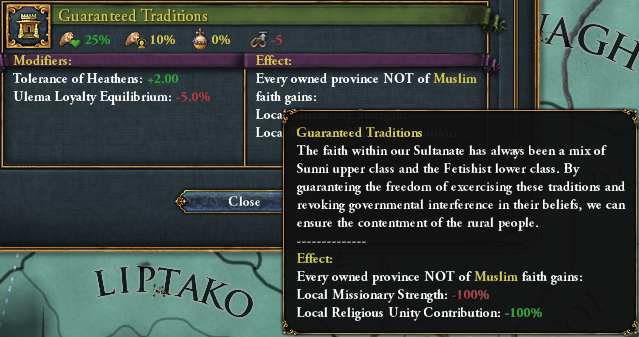 Completing "Pagan Alliances" will permanently increase the opinion of all Fetishist countries of you by +25 (value might change). "Unite the Tribes" is the final tolerance mission. You must ensure that at least 35 owned provinces are Fetishistic and that you have a stable and tolerant empire (so basically, have stability, no rebels, +3 Tolerance of Heathens). Completing it will give you the following event: 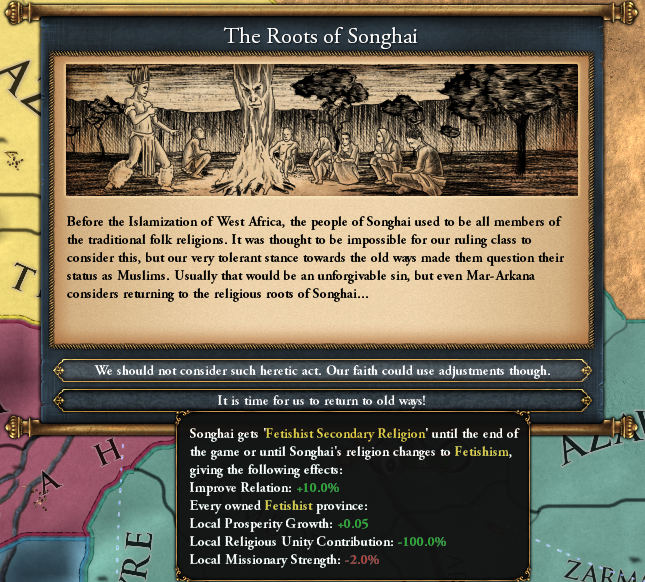 This concludes the alternative missions.

A few other highlights of the mission tree and for Songhai:
Now one last thing before finishing the Dev Diary. In my very first Dev Diary (in which I made a lot of rookie mistakes, I admit it) I presented the content for Mali. Over the week it has seen some changes I think you all might like.

1. Mali has discovered Fezzan, Mamluks and the path to Mecca (see image below)

2. Mali's privilege "Controlled Gold Mining" has seen some rebalancing (btw, in the code the modifier already affected Goods Produced and not Production Efficiency. Just the tooltip was messed up last week and I didn't notice it.... so yeah, sorry about the misunderstandings). Again, the values are nowhere near final but it is getting there. 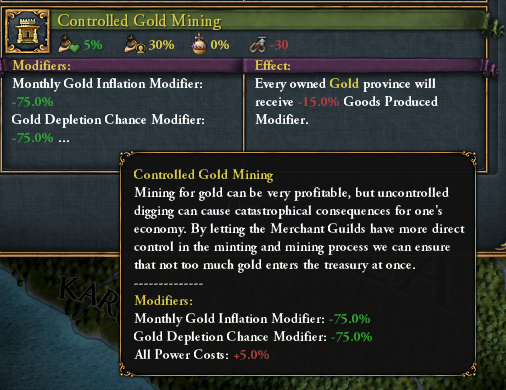 3. Mali previous "Abu Bakr" missions have seen a rebranding, changing the name to Ko Mamadi, the Madinke (Mali) version of Muhammad ibn Qu. (Abu Bakr was originally used because of consistency with the achievement name. In hindsight, this was a dumb decision of mine)

4. The final Mali mission with the 15k Ducats requirement and its reward have been completely replaced. Now it only requires you to have 3 Level 3 Advisors and Monthly Income of 50 Ducats.
The reward is the following event 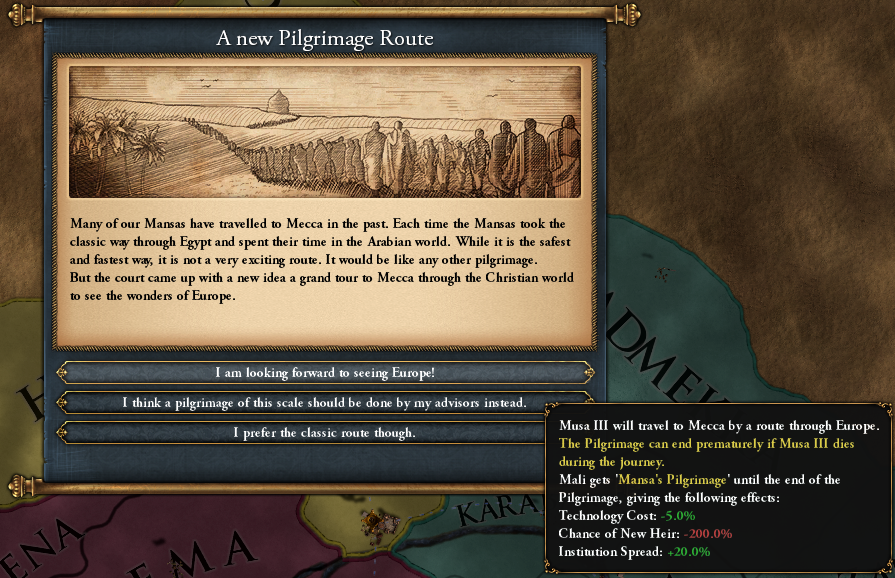 I would like to talk more about it in this Dev Diary, but I think it is bloated enough already. The pilgrimage summed up is recreating the pilgrimage Mansa Musa did a century ago, but this time you have the choice to go on an alternative route, which goes through Europe. The pilgrimage takes around 5 years to complete and every ~100 days your travelling group visits a region where you enjoy the hospitality of the local people there. You can decide to leave a donation or move on. If you decide to make a big gift, the greatest nation of the region will receive this: 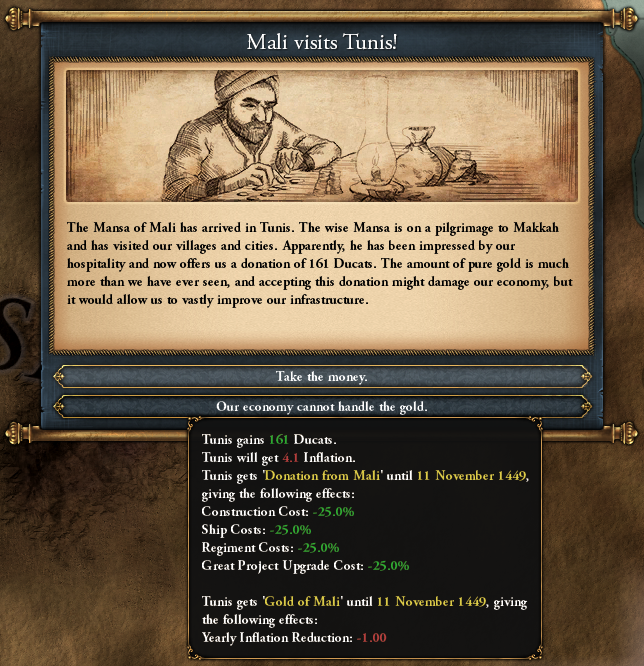 The rate of inflation has been lowered significantly and the AI is more inclined to refuse if the event would put them over 15 Inflation. The ducats you get are currently 1 year of Mali's Income and the Inflation scales with the Percentage of trade income compared to your total income (values might change later). Although I will miss the bankruptcy pop-ups, I have to admit that this design is much healthier for the game overall, and that a total crash of a continent does not belong in the base game.