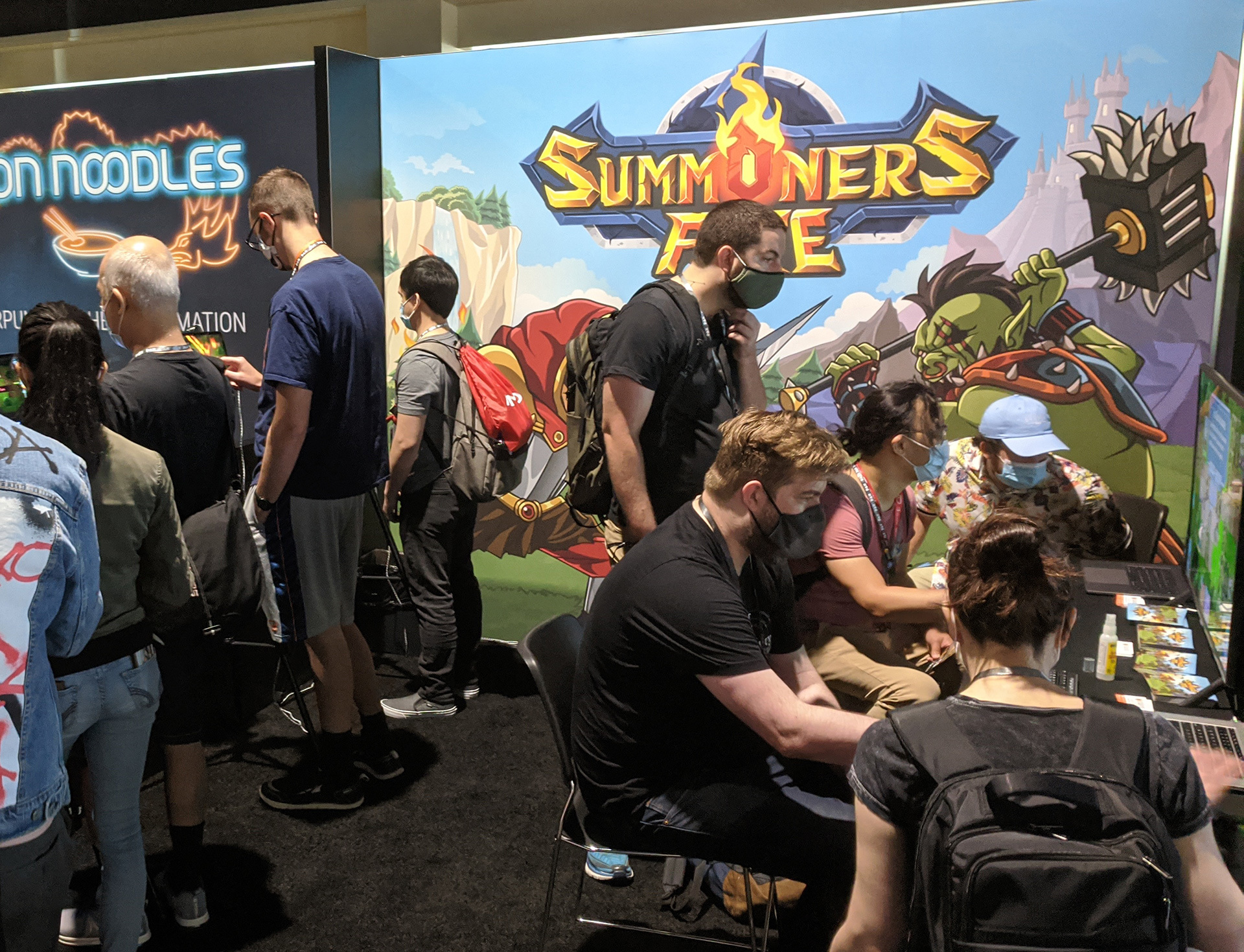 Summoners Fate was a popular attraction at PAX West 2021. I'm so glad everyone enjoyed the demo, and it was wonderful meeting our new fans in person.

This year, we had the incredible honor of being selected for the PAX10, a curated selection of indie games chosen by PAX for a unique exhibitor experience. It was an amazing four day experience, and I enjoyed every minute of meeting new players and seeing your reactions and excitement about the gameplay. 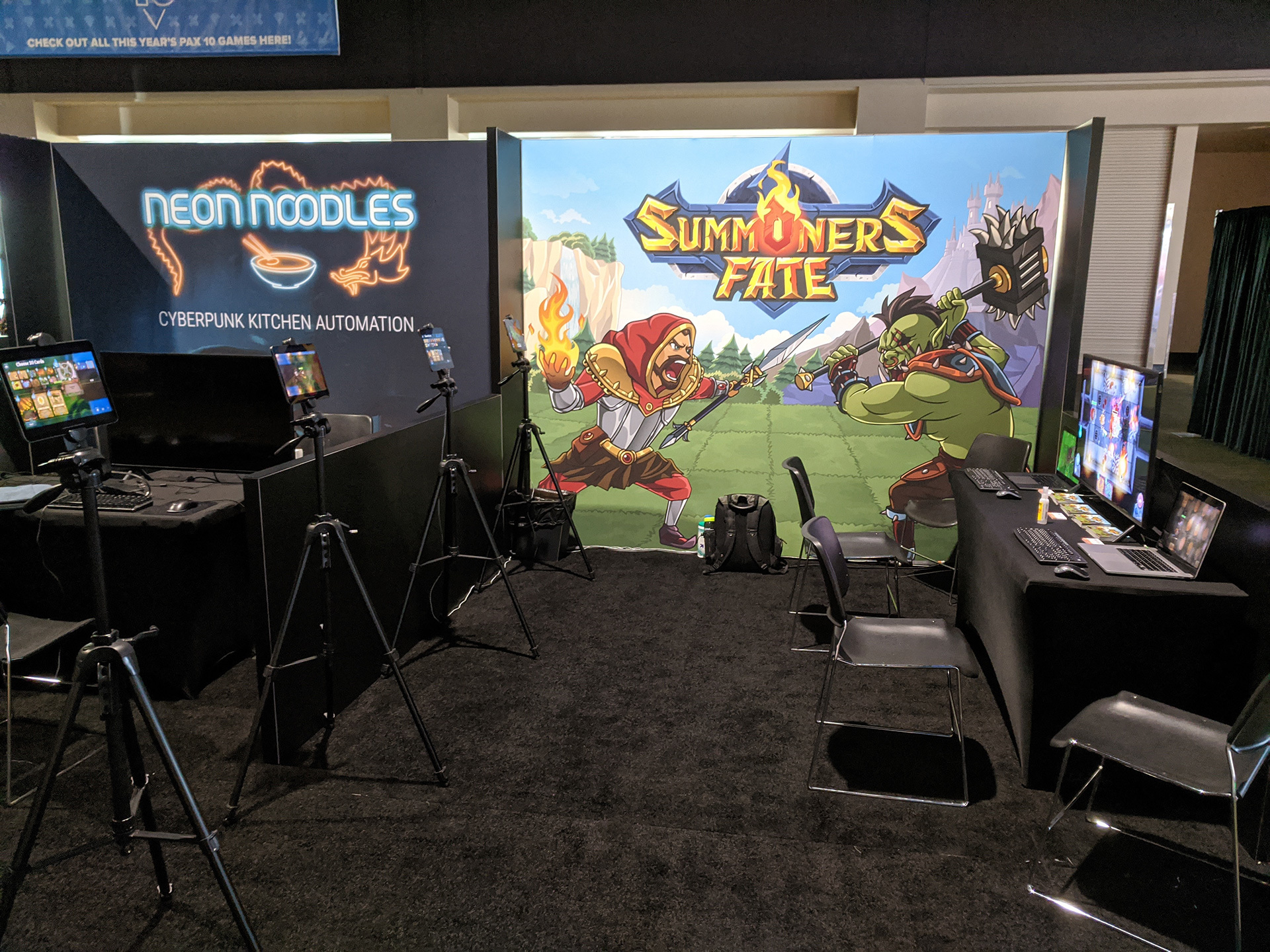 PAX provided PAX10 exhibitors the “Rolls Royce” of indie booths, including a 10’x10’ carpeted area, power, 4K TV, 6’ table, 4 chairs, a massive 10’x8’ printed backdrop (which we got to take home), plus extra carpeted space in front of the booth. We set up 6 demo stations (4 iPads on tripods and 2 laptops).

Like most of the exhibitors, I was anxious how the show would go with the limited attendance anticipated. But, when the crowd started pouring into the expo hall Friday morning, all my worries melted away - this expo was very much still PAX. The energy and excitement from attendees quickly uplifted my spirits, and our booth rapidly filled to capacity. 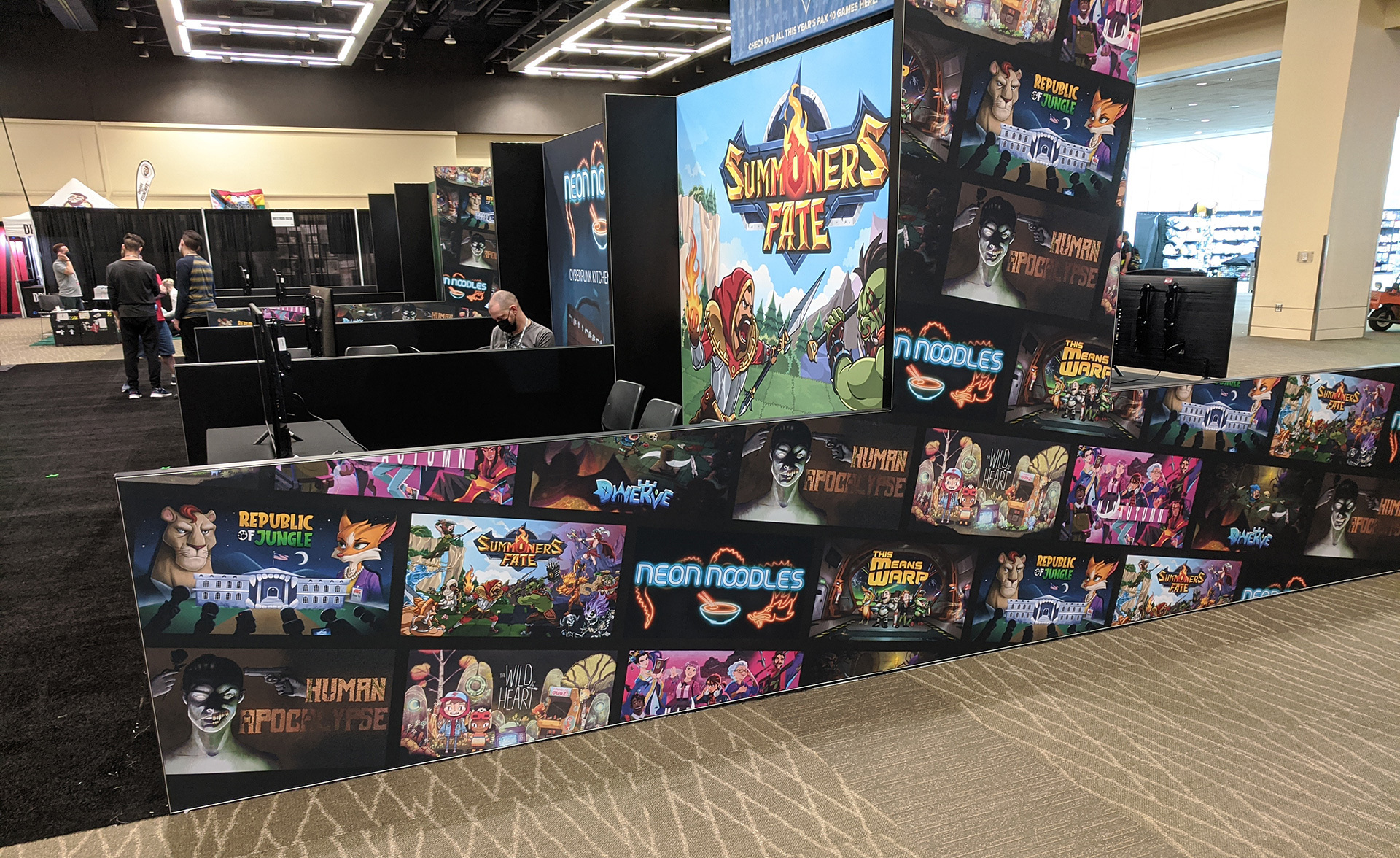 The sidewalls of the PAX10 booths also featured printed keyart for all the games. It’s the details like this that show just how much PAX loves to support indie game developers. 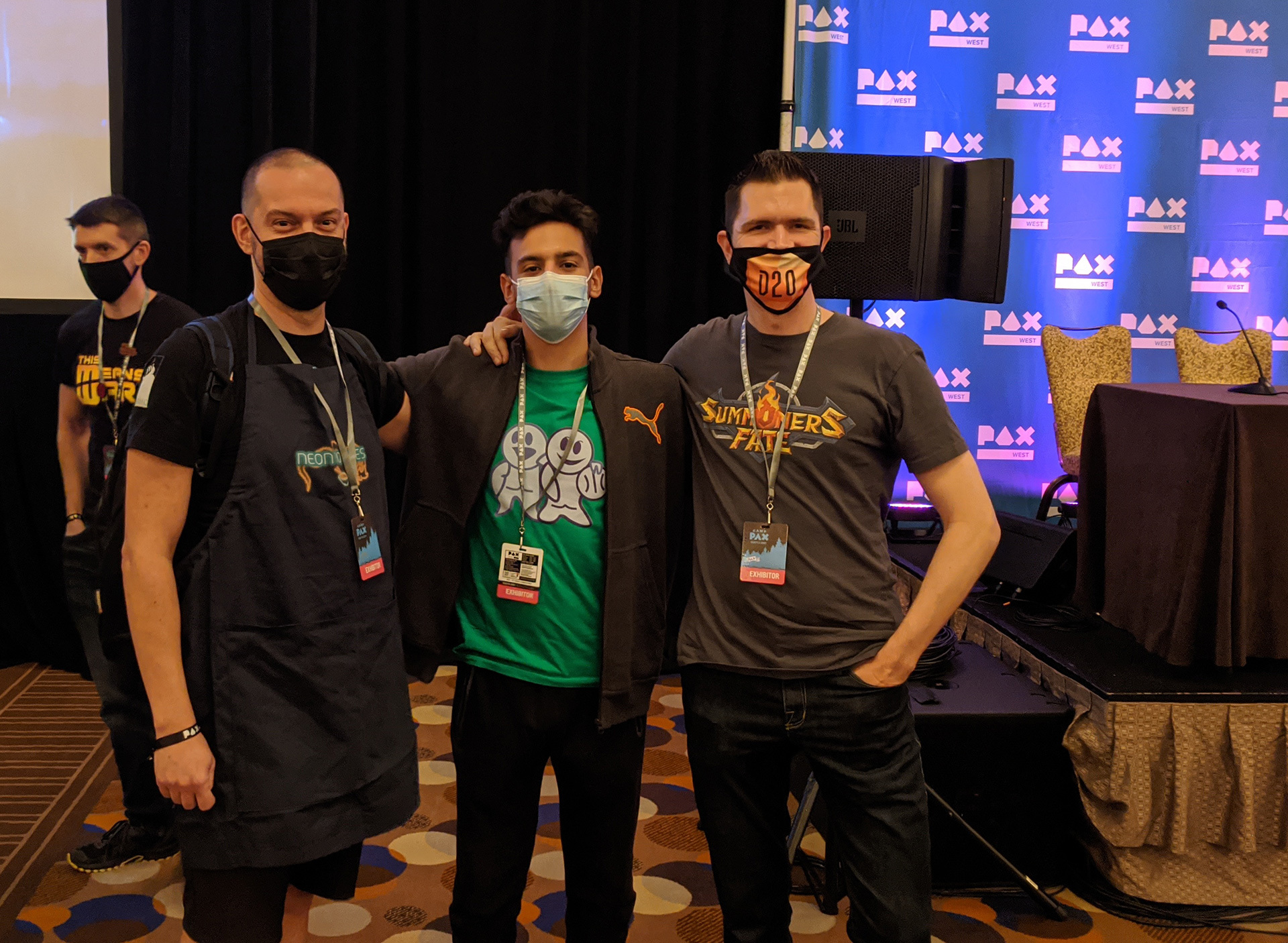 The camaraderie of being together with my fellow indie devs is something I’ve missed during the pandemic, and it was great to make those connections again. PAX even hosted a panel for us to talk about our games, which was broadcast live on Twitch and on Steam. From left to right - Matt (This Means Warp), Radu (Neon Noodles), Faris (Human Apocalypse), Ross (Summoners Fate)

As always, the PAX enforcers did a phenomenal job supporting us by keeping the crowds managed. This year, they even set up markers to help direct players into our booths. I never realized the power of a duct-taped X on the ground before - it’s an amazing thing. When you have an “X”, people naturally stand on it and line up for your attraction. This helped things go really smoothly. I found myself needing to talk less, and instead observed and listened more. Normally, I’d be excitedly asking folks if they wanted to “hurl squirrels at orcs”, but soon it was attendees who were asking me to pitch them the game while they waited in line to play. 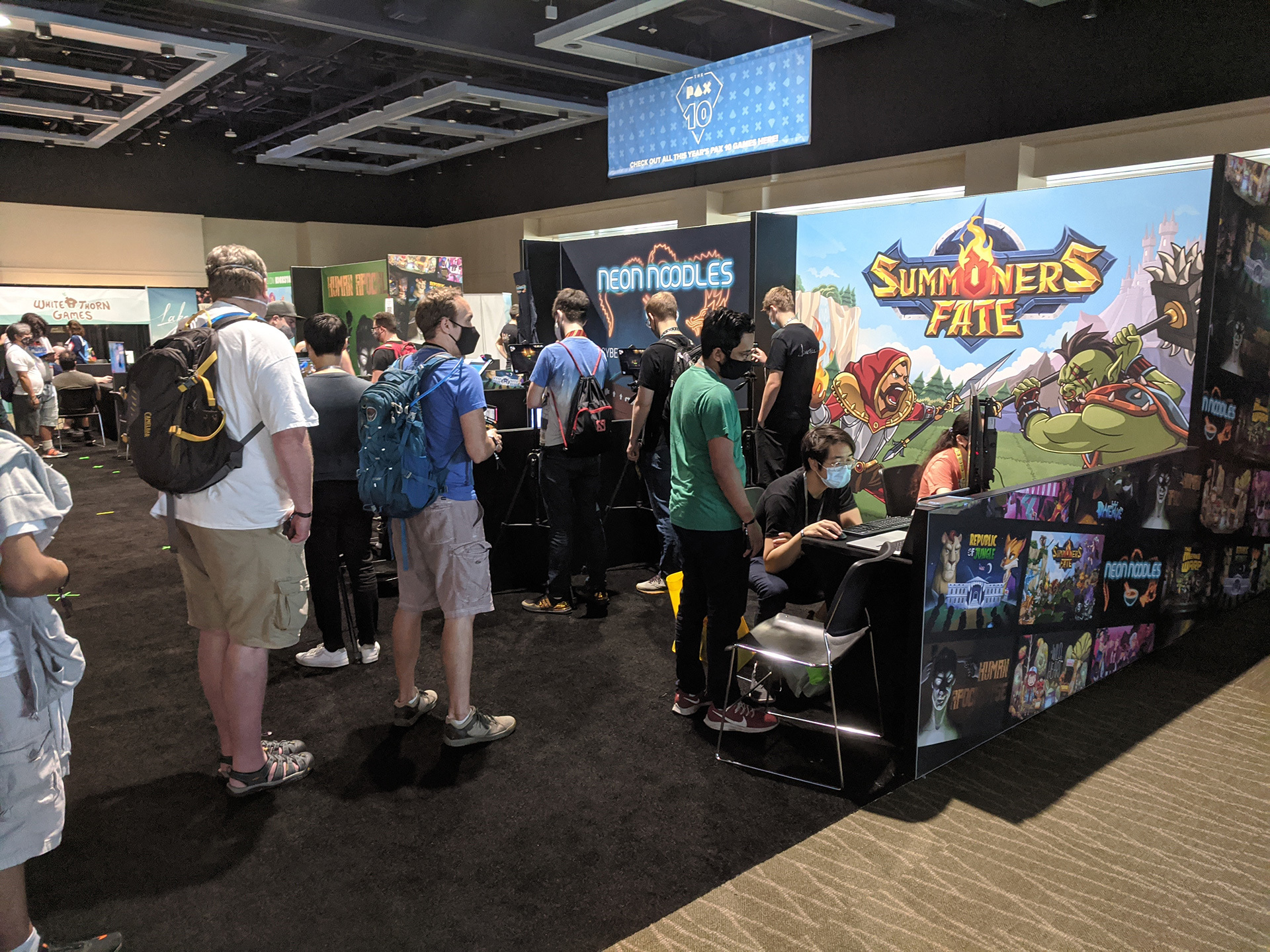 Attendees line up the queue line setup by the PAX Enforcers to play Summoners Fate.

Key Moments of Player Feedback
I can recall in the intense, crowd-filled moments how it felt like PAX would go on forever, but now, looking back, it was over in the blink of an eye. There were key moments of player feedback that struck my heartstrings:

An 11 year old boy with his father who asked such astute questions about the gameplay, and, then, after finishing the demo, had the biggest smile on his face and confidently said to me: “This is the greatest thing ever!”

Another attendee who proclaimed: “You have the best game here and I can’t wait to play more!”

And a message I’d received on our Discord early Saturday morning after our first day:

“I can see why you were a top 10 finalist and why I had to immediately buy your game. Your 5+ years of hard work can be seen when you play this labor of love. I'm super excited to see some other Summoners and I think you nailed and perfected what makes turn based strategy games so amazing! Keep up the amazing work and I hope you had/have an amazing PAX!!!”

Of course, the greatest compliment you can give an indie developer is to recommend our game to your friends. And we had that in spades this year. I really enjoyed the experience of folks bringing their friends to the booth and pitching the game to them in their own words. Come Monday, when expo traffic finally slowed down, I found myself hanging out with attendees who’d now played the demo multiple times and simply wanted to chat and watch others play. As a special treat for these fans, I switched over from the expo demo to our prerelease build so they could experience both the full single player mode as well as play multiplayer games against their friends. It was exciting for attendees and myself to watch players battle each other.

Thanks for your Support!
It wouldn’t have been possible for me to attend this year without the support of my friend, Chris, who not only gave me a place to stay, but also kept me recharged each night with sour beers and chicken strips from Linda’s Tavern, and kept my mind sharp with some pretty intense chess battles in the late evening. Thanks buddy! Also special thanks to my local Utah Indie Game devs, Daryl and his son, Parker, who stopped by my booth multiple times to check on me, bought me lunch, and delivered a whole bunch of other treats and goodies to keep me going throughout the show. 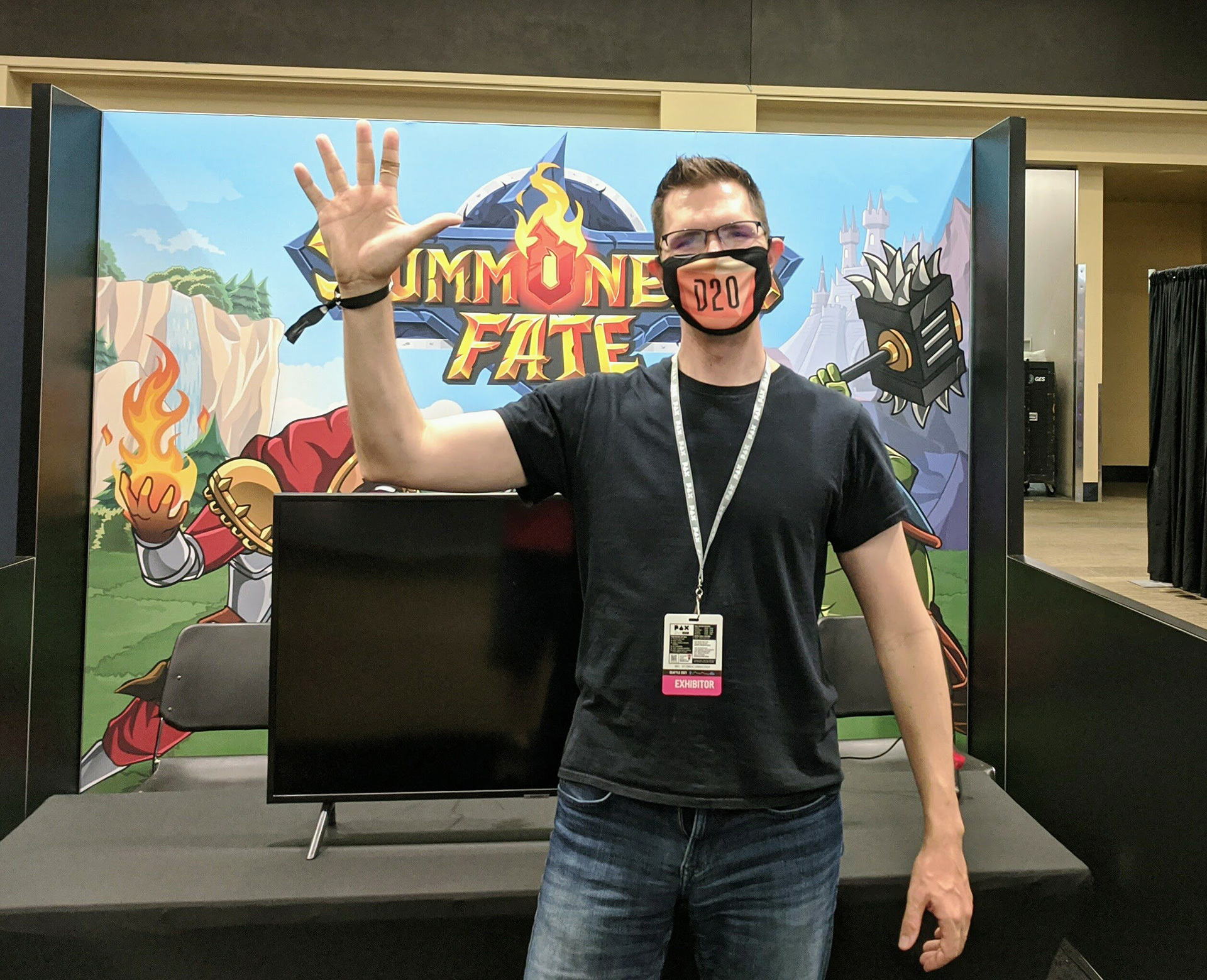