Anuncios _
Weekly Report #49
enviado por apocalipticm @ 07:27AM on November 27, 2020
Hello Stalkers!
Before we get to the heart of the agenda, we'd like to announce something important. Our game is voting for the Steam Awards! As Chernobylite was released in Early Access in October 2019 (over a year ago. Where did that time go...) we are starting a nomination for the award in the "Labor of Love" category. We bow down and ask you: if you've had fun playing our game so far - vote for Chernobylite!

And remember that by voting you earn a special Steam badge! If you want to have the highest tier of this badge, you have to write or update a review for one of the nominated games. Of course, we would love if you'd do this for Chernobylite <3 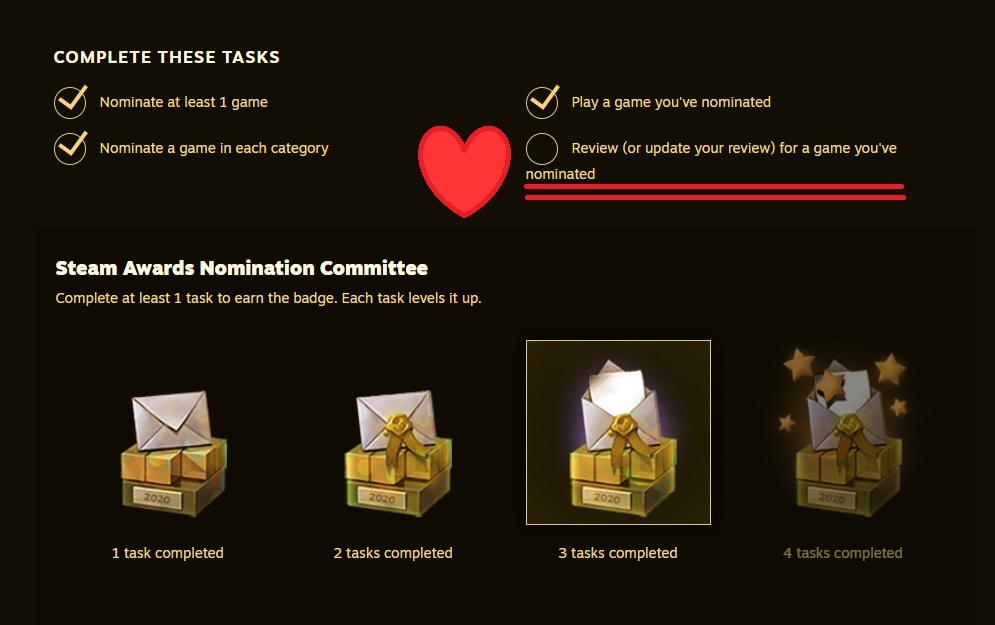 The game has changed much since we've started Early Access, so if you wrote us a review 6, even 12 months ago, Chernobylite is a totally better game now. So hop in, play, see for yourselves and tell us what you think about the current state of the development!

Ok, no more grovelling! Here come our weekly specs!
Performance improvements and other smaller bugs
We will start the report with significant changes that may not be noticeable to the human eye, but are actually crucial to the smooth running of the game.

The problem that we want to solve is that the game lagged after showing a dozen saved games (or more) with all these elements at once. We are trying to work out a solution that will fix it - we have a few ideas on how to do it so we’re testing them right now. We decided to do a little reorganization of the new load game menu by reviewing the user interface, screenshots next to each save and metadata. Such as current level, current quest, save timestamp, playtime duration, etc. 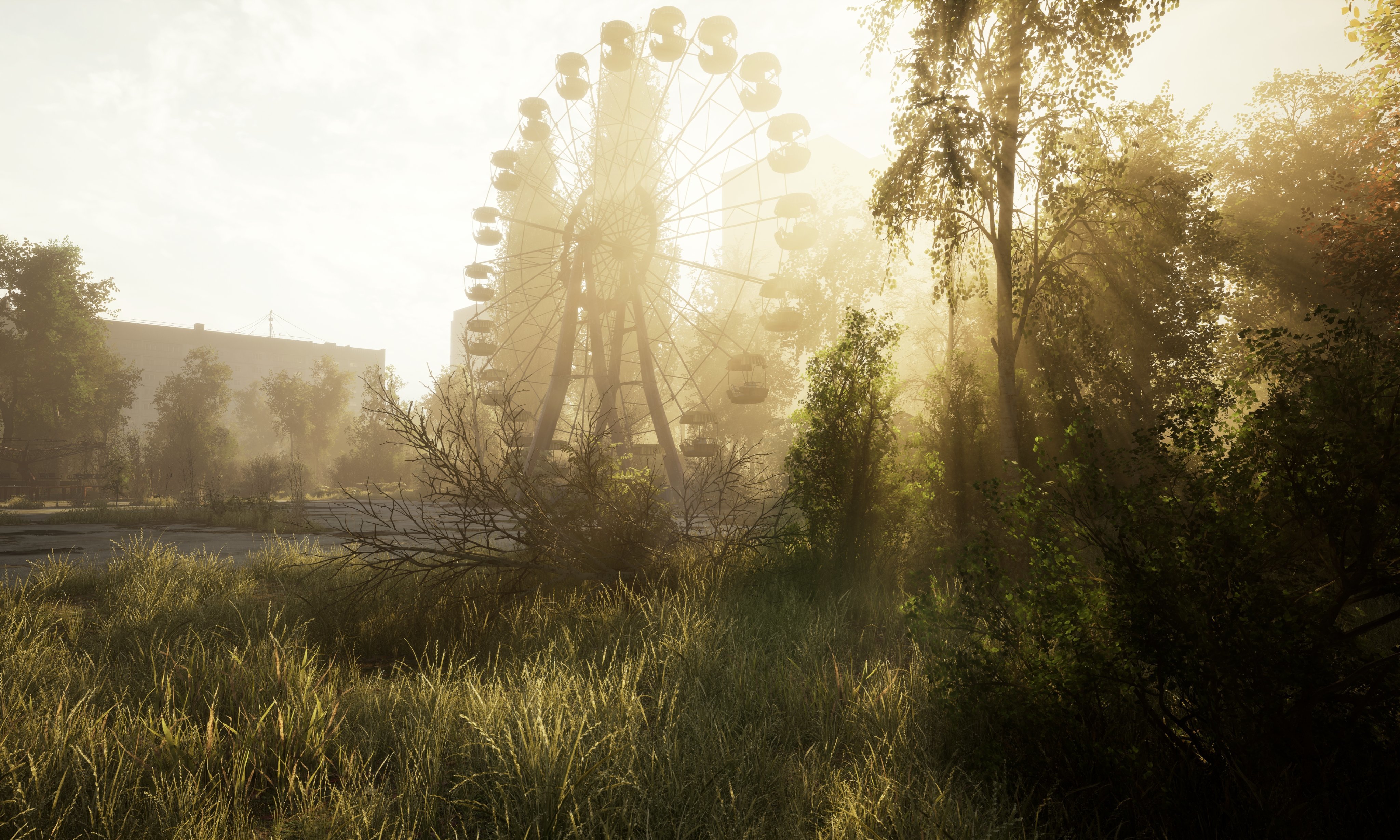 In addition, we are working on other improvements, which, although they are minor, have a huge impact on the gameplay and on how much you’re enjoying the game. This includes improving interaction with very small objects - this is not the pixel hunt level of old point'n'click adventure games yet, but we would like to avoid it anyway.

Also fixing the sound of footsteps that did not work well in some places, and the marker placed by our comrades who were in the wrong places or a bug that made the traps react to dead bodies. In addition, there are also some grammatical errors in the dialogues that we and you picked up.

The list of these minor bugs is much larger, so expect the bigger list when the update (Hotfix) will arrive on Steam.

By svid.vp
Chernohost
Our favourite little devil, a.k.a. Chernohost, also didn’t escape our attention. And there is always room for improvement. ALWAYS, believe us. For example, sometimes this enemy happened to be invisible, like Bilbo Baggins after putting the One Ring on his finger. It’s hard to fight a group of Chernohosts, so imagine being attacked by… nothing. Or at least nothing visible.

Another bug was keeping Chernohost glued to us all the time. Literally! To say that it looked weird is not enough... Apart from that, we are increasing and widening these creatures’ view range and - most importantly - we are giving them the opportunity to aggro their comrades. In the group, Chernohosts are the strongest, so if one will see & attack you. And the rest will probably do the same.

Audio and visuals
Time for a visual-auditory experience. We are currently working on the sounds made by falling bullet scales. We want the sounds to reproduce the fall of the scales not only to the ground, but also to other surfaces, such as heavy metal, glass, crystal, deep water and shallow puddles. Again, this is important to us because we want to make the game as real as possible.

Though we couldn’t show you that today, as we can’t publish any videos in Steam News, we will prepare some behind the scenes in the next month. You’ll probably be quite surprised how we can produce such sounds ^^

Among the more important visual fixes, we are working on the extremely annoying scene where you meet Tarakan in Pripyat Port. Why “annoying”? Because it doesn't work the way it should! Due to this, the quest cannot be finished - it has as many as four endings, which already mixes the whole thing up.

As for the other things, on the screenshot below you can see that we are testing various solutions in the Farm that can help us solve the problem of bad display of objects from a greater distance. 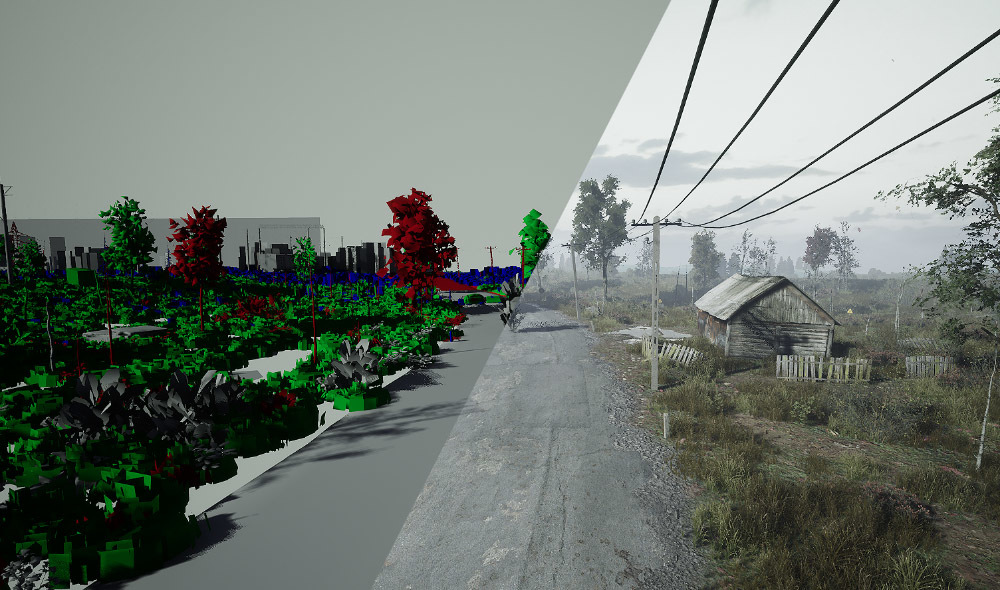 We are also working on different versions of new game objects (in this case: trees). No textures at the moment.

And finally, a package of assets from almost all sides. Enjoy!