Oznámení _
Weekly Report #50
odesláno Pablo @ 07:08AM on December 04, 2020
Hello Stalkers!
So we made it! We've reached our destination! Here is a round 50 report before your eyes! <celebrating_cat_funny_hat.gif>

We filled 49 previous reports with our sweat, blood and the tears (of joy) we shed during our struggle over Chernobylite. All this to provide you with the most polished game that we hope will give you a lot of fun.

As you may have also noticed, we’ve recently jumped into December. It means we're getting closer to the end. But that doesn't mean we've slowed down. In addition to fixing the bugs you report, we are working hard on the most crucial elements of our game (THE HEIST!), And we are also preparing Chernobylite for the raid on consoles of the current (yet) generation and the one that has just arrived. So there will be more things to come before the premiere.

That's it for the introduction. We invite you to read the 50th report, in which we also included some behind-the-scenes curiosities. ;)
Shield of Black Stalker
For starters, traditionally about the major and minor changes and fixes we're working on to make playing Chernobylite fun, not a chore. Errors can be really diverse, and these sometimes never cease to surprise us. 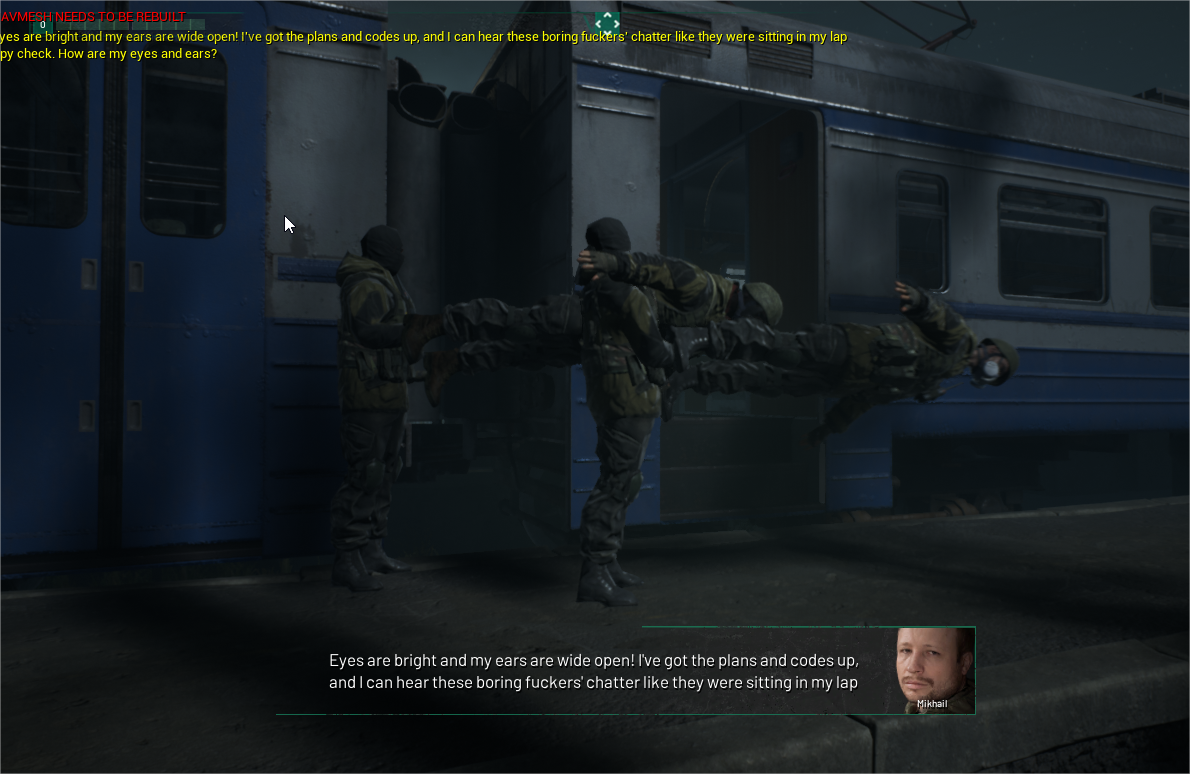 Of these smaller fixes, it's worth mentioning that we’ve taken care of the disabling of save and load options in the pause menu (if the player didn't have any "daily saves"). We have also turned on the pause menu during the dialogue - thanks to this, when you have to leave the game unexpectedly for some time, you don’t have to worry about missing an important thread in the plot.

In addition, we’ve fixed investigation boards order when hints or notes were collected in a random order, removed the adrenaline tutorial once slow-motion option ended, made the active weapon hidden if it was moved to storage.

From the bigger things, we can say that we are working on some essential animations and effects in the game. Below, one example: the effect of destroying a black stalker shield.

In the center of the Zone
Here we want to show you the backstage of Chernobylite development. However, it will be something completely different from what you have seen recently. So get ready, because we have a little surprise for you that comes with it.

As you know, we went to the Exclusion Zone many times because of the project with our luggage stuffed with photographic and video equipment. It was the perfect opportunity to take a lot of photos and videos, which were later used to create the world of Chernobylite. The trips to Chernobyl also allowed us to create assets that serve as narrative elements. Including the most important ones, related to one of the key characters in the game.

Tatyana Amalieva is a very mysterious and ambiguous character that the player gets to know at the very beginning of the game. Igor Khymynuk's fiancée, who worked with him at the Chernobyl power plant, disappears on April 26, 1986, the day of the disaster. 30 years later, Igor travels back to the Zone to look for her.

To portray Tatiana, we needed a suitable place, some props (including clothes), and most importantly - a model. And so our graphic designer Joanna became Tatyana. It’s her character that you see at the very beginning of the game's intro. And she will be happy to tell you what it was like in the Exclusion Zone and about working as a model!

The first trip to the photo session took place in November 2017. The team spent a day in Sławutycz and two days in the Exclusion Zone. - It was a very intense time. Wake up early in the morning, pack costumes, equipment and travel by train to Chernobyl. I was very excited because I had never had the opportunity to pose in such a specific place before. It was a big challenge - says Joanna. 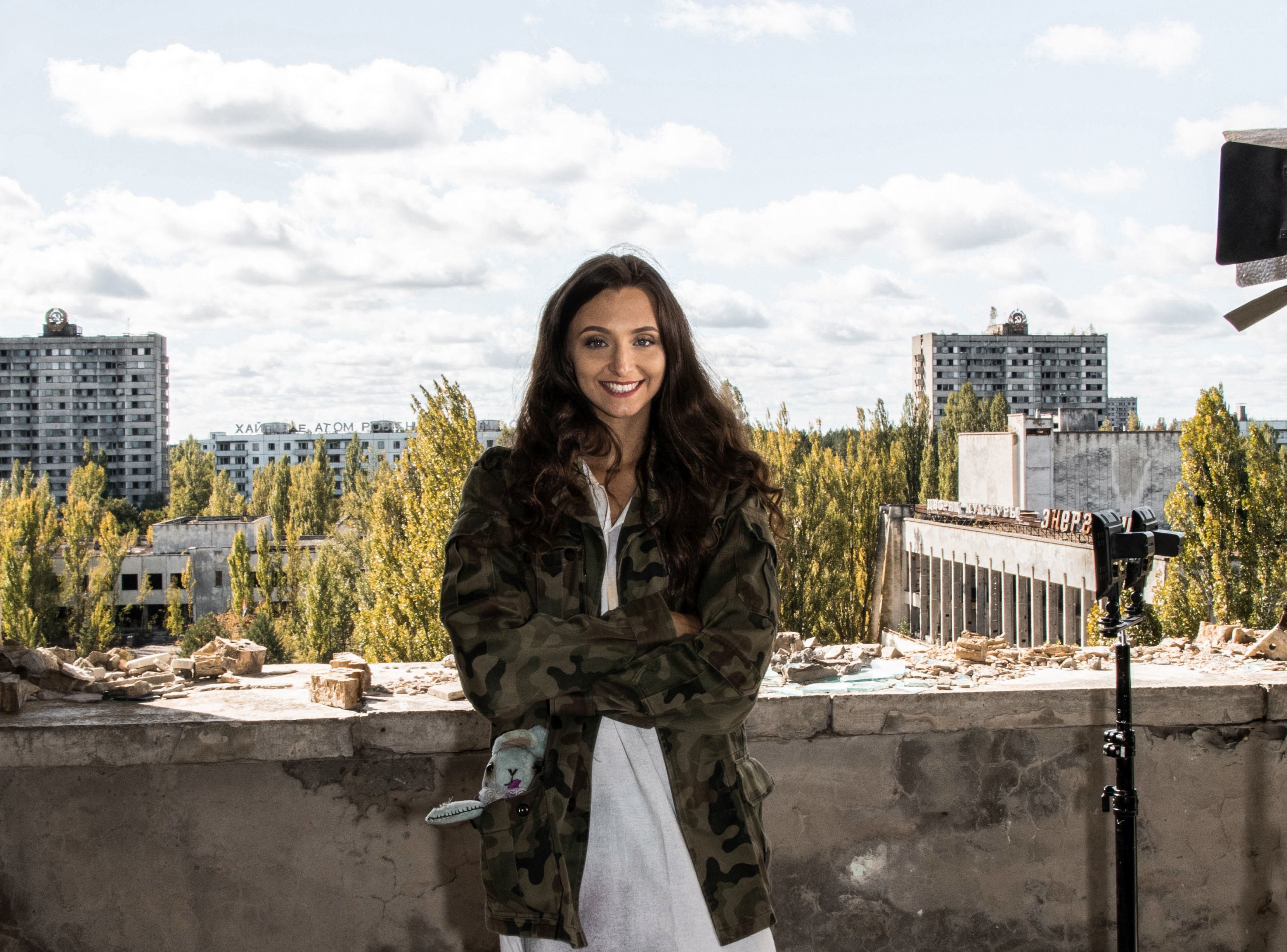 As she claims, from her first trip she remembers mostly the peace and silence, the unique atmosphere and mystery of this place. - The centre of Pripyat made the biggest impression on me. The Ghost Town, which had a population of around 50,000 inhabitants before the catastrophe. And now nature has taken over the power in this place.

The first location where photos were taken was the Duga radar. Unfortunately, the conditions were difficult and the weather was not favourable. - I was only wearing a summer dress. I've never felt so cold before - Joanna admits. Subsequent sessions and recordings took place, among others, in the centre of Pripyat, the Amusement Park, the City Hospital No. 126 in Pripyat, the Pripyat Café, and the Kindergarten in Kopachi. During these few years, the team managed to see a large part of the Exclusion Zone. 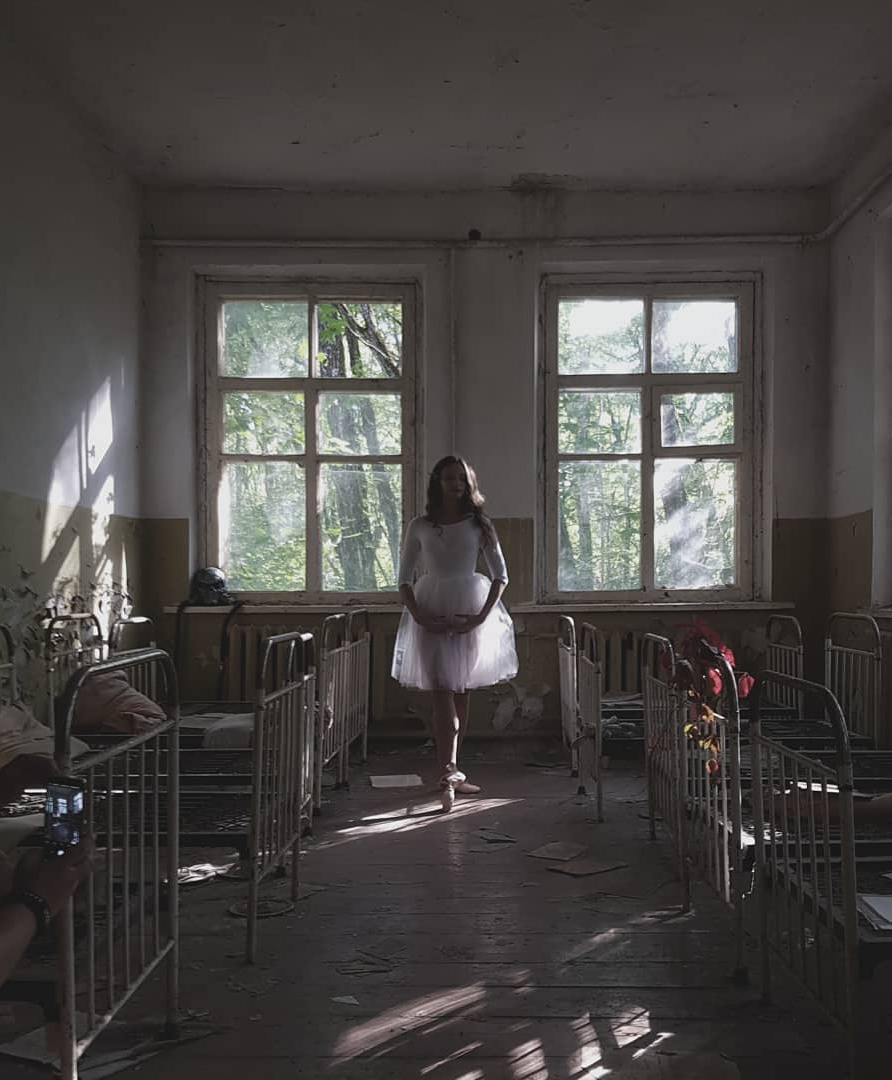 The trips were also an opportunity to bring a lot of anecdotes from there. In one of them, the heroine was Joanna, or rather Tatyana, played by her. - Two years ago, during the session at the Polesie Hotel, we heard the voices of coming tourists. We made a little joke. I was wearing Tatyana's ghost costume, I was holding a doll in my hand, I was throwing my hair over my face. I slowly started walking towards them. When they noticed me, their reaction was indescribable! You never know what is hiding in an abandoned city. ;) 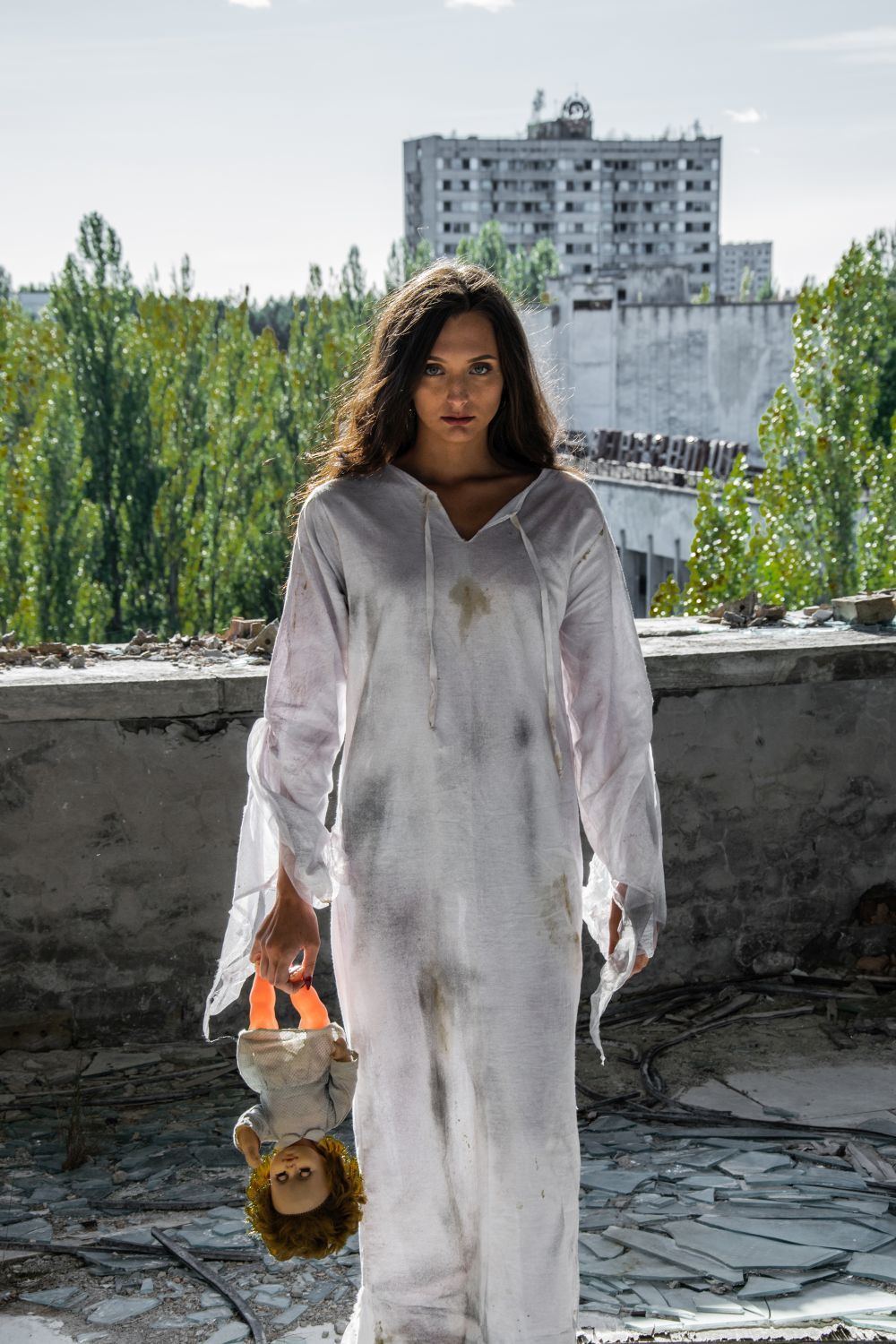 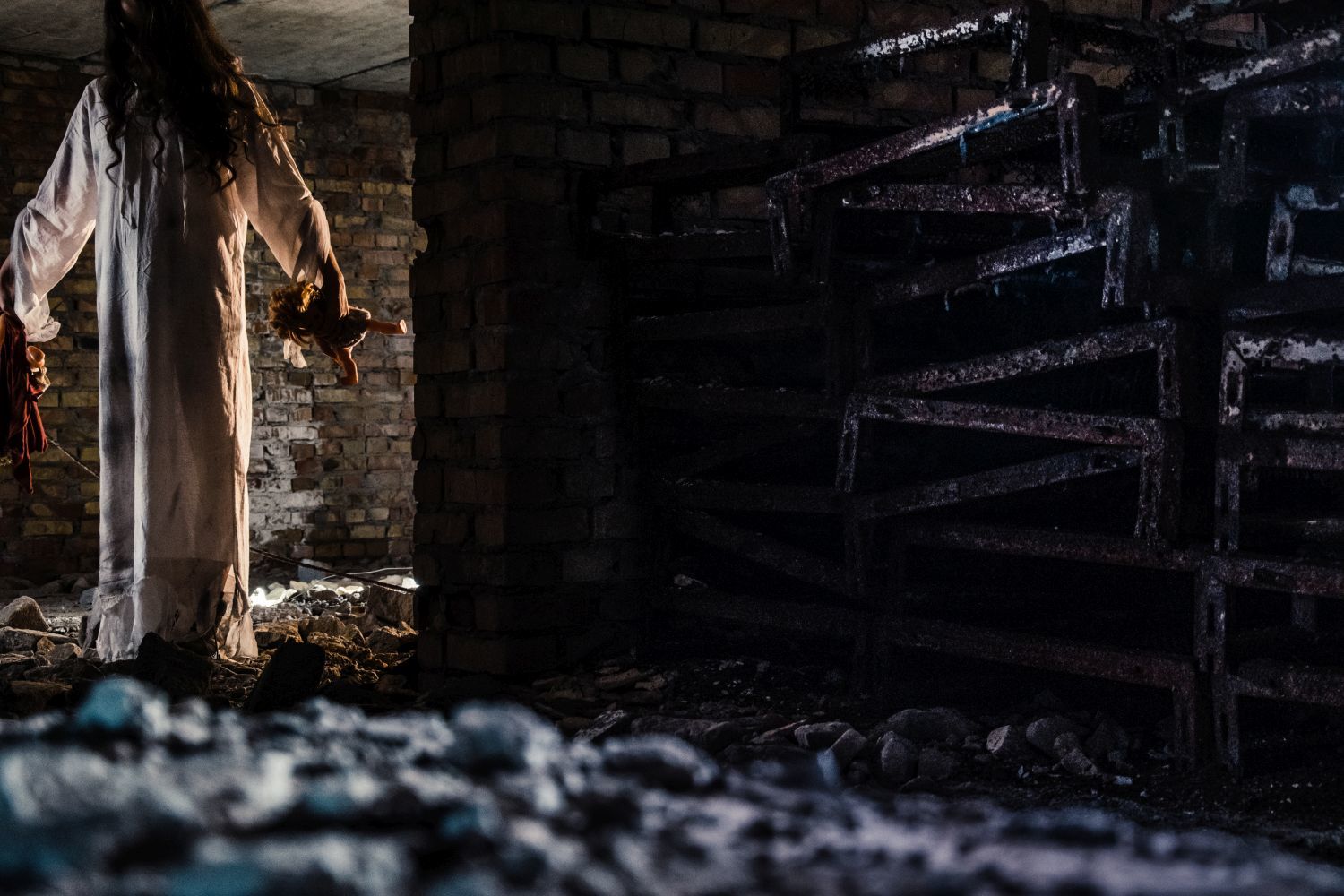 - We travelled to Chernobyl every year, I was there 4 times. We’ve also planned a trip for this year, but… you know. 2020. The pandemic thwarted our plans. I hope that we will be able to return there in the future - she adds.

It's time to answer the question of what 3D scanning of a character looks like from the inside. This happened in the company using photogrammetry. - It's a very interesting experience to be surrounded by 114 cameras. The most difficult aspect is to keep the chosen pose for some time - says Joanna admits. And she adds: - I stopped in time as a 3D model! It is an amazing feeling and a souvenir for the future. 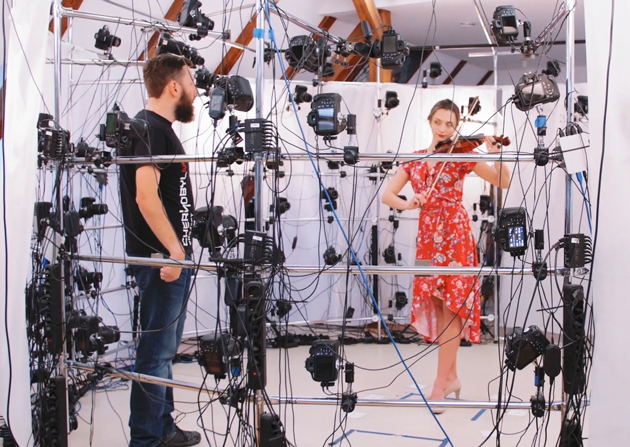