Welcome to the charming world of Eastward - population declining! Journey through a society on the brink of collapse. Discover delightful towns, strange creatures and even stranger people!
Visit the Store Page
Most popular community and official content for the past week.  (?)
FEASTWARD
Feb 25
Hi everyone!

Happy Lunar New Year to all those celebrating the Year of the Ox! Now the development team is back from the holidays, let’s kickstart the first dev blog of 2021 by sharing some tasty info about one of my personal favourite gameplay mechanics in Eastward - cooking!

You’ve probably already spotted that our silent protagonist John often wields his trusty frying pan to fend off all sorts of monsters, but did you know he can also whip up a mean bowl of Fruit Salad? (Yummy, yummy.) 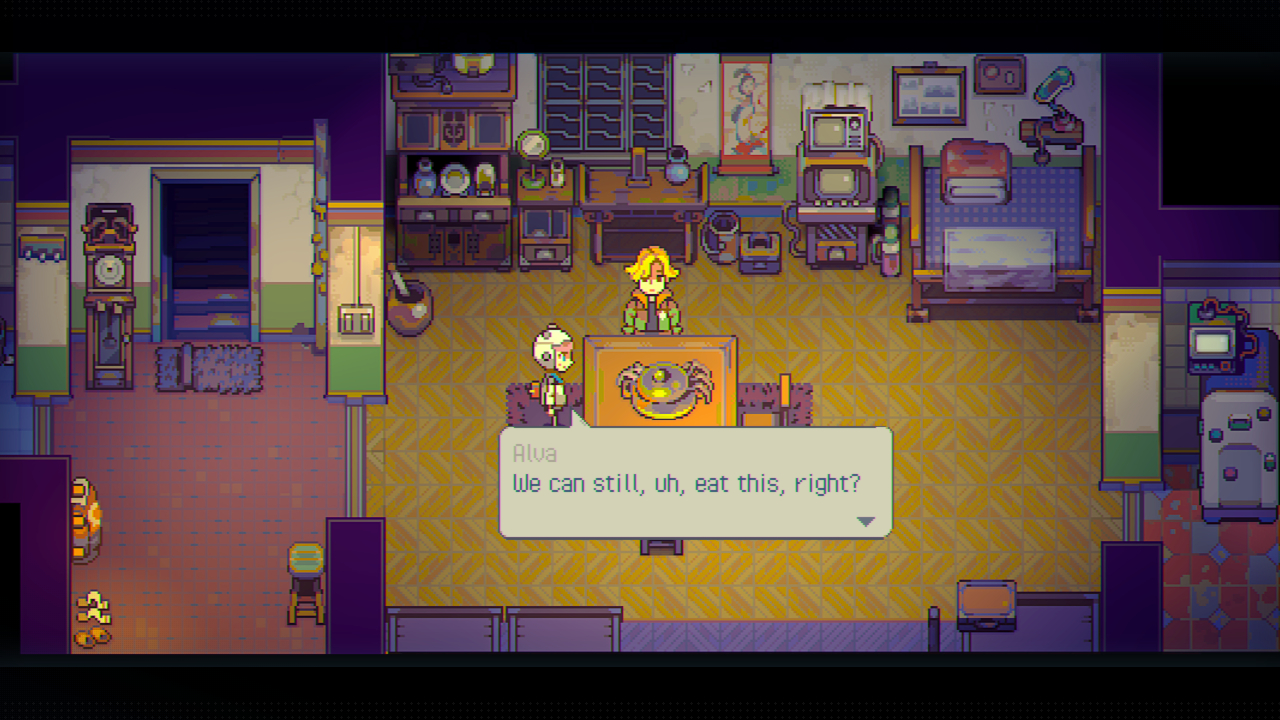 The world of Eastward is full of fantastical ingredients, conveniently-placed gas hobs, big eaters (we’re looking at you, Sam). Even Dam Hill’s very own casino godfather, Lee, considers himself a keen gourmet! As your culinary adventure begins you’ll be able to spend your hard-earned Salt purchasing ingredients from various merchants, as well as foraging in hidden stash boxes littered across the lands - who doesn’t love milk found in a random crate in an abandoned shopping mall?! Every ingredient you find can be cooked up into equally strange and delicious recipes. 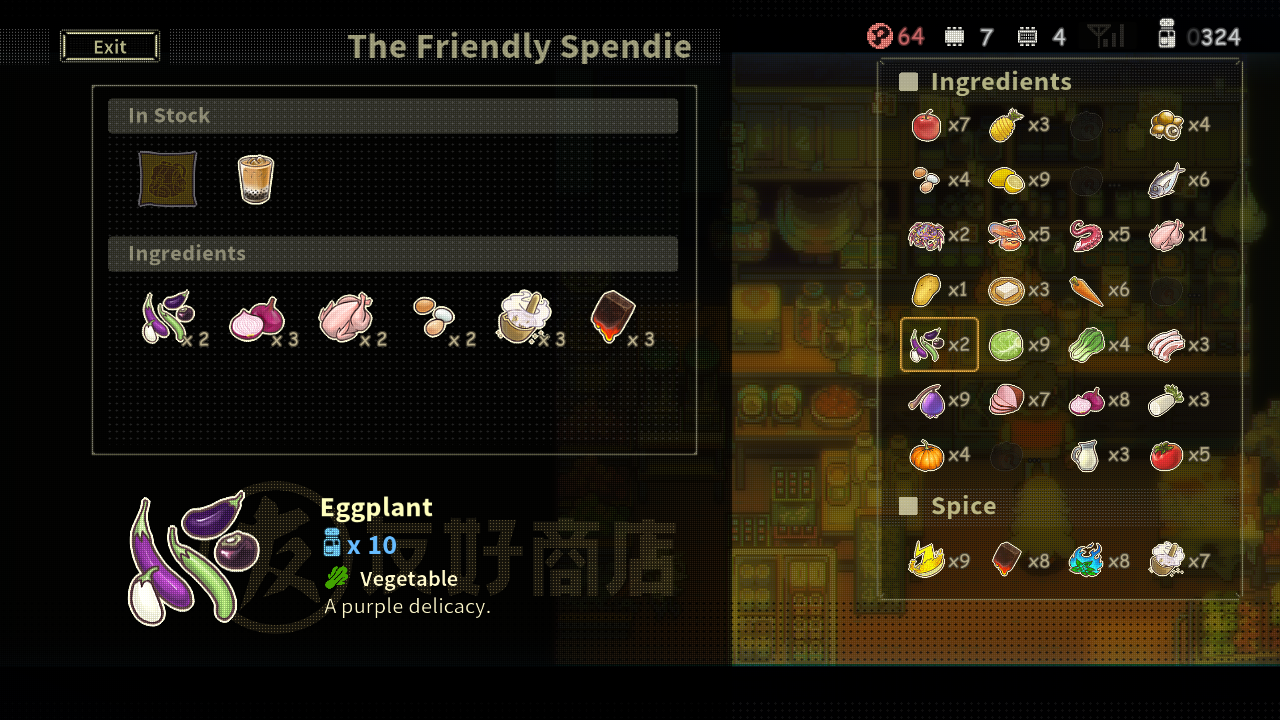 You don’t actually need a specific recipe in order to start experimenting - any ingredient in your inventory can end up in John’s frying pan! For example, combining any 3 vegetables will whip up a perfectly presentable Vegetable Stir Fry, but you could try something a little more experimental like Oyakodon (a chicken and egg rice bowl) or a Potcrock Isle speciality, Drupe Fried Rice. Once you’ve successfully made a tasty snack, you’ll then have a recipe recorded to use forever more.

To top it all off, once all your ingredients are in the pan a culinary slot machine wheel will appear, which will determine how effective your dish will be and what stat buffs it may bestow. Cooked dishes can be handy in combat, not only for replenishing health, but also revitalizing Sam’s energy levels, increasing attack speed and more. Make sure to pack yourself an emergency snack or two for those boss battles! 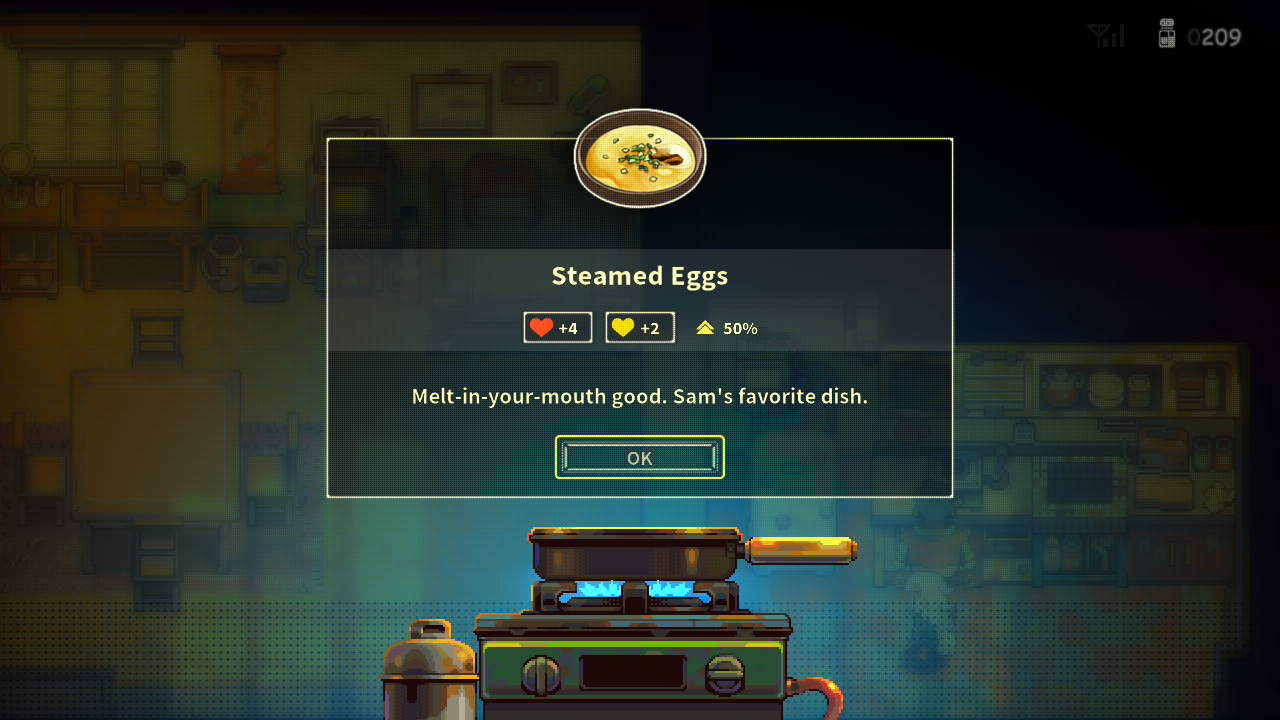 You might also find that certain townsfolk that you encounter may ask you to track down ingredients and serve up a particular dish in order to finish a quest, so it’s always handy to have a stash of veggies, meat, fish and seasoning in your backpack. 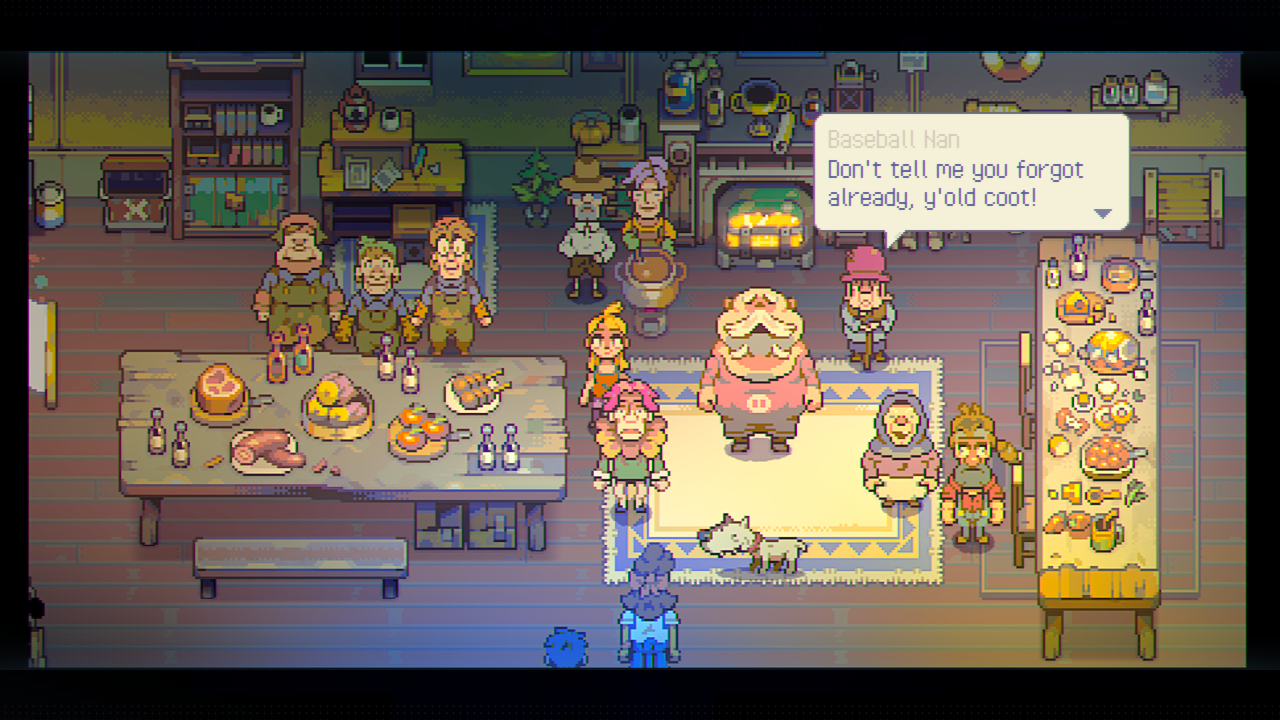 That’s all for now! We hope you’ll enjoy serving up some serious grub when Eastward’s lunch, er I mean launch, comes around later this year, until then practice your culinary skills and look after those pots and pans. If you haven’t already, make sure you add Eastward to your Steam wishlist to get notified about the latest developments!

If you’re a streamer and keen to get early access to keys when they’re available you can request access by filling in our {LINK REMOVED}Content Creator form. You’ll also find answers and basic info about the game in our handy FAQ[eastwardgame.com].

Lastly, if you're as excited about Eastward as we are, come join the community discussion over on our Discord[discord.com] or Reddit, and follow us on Twitter for more Chucklefish gaming news.

I hope you’re all staying nice and cosy as we edge into December, or chilling out in the sunshine for those of you in the Southern hemisphere.

It’s been a hot minute since we last updated you about the progress of Eastward and it’s no secret that this year has been a tough one for everyone, including the developers at Pixpil[www.pixpil.com]. The team in Shanghai lost access to their server for quite some time at the beginning of the year, with the power cut to their office and no way to enter the building at all due to quarantine restrictions, which of course had some knock-on implications to the development schedule. However fantastic progress has been made despite these challenges throughout the year, and Pixpil are now working on Eastward’s final chapter segment, tightening some loose ends and brushing up a few boss battles.

It’s all super exciting stuff, and we can’t wait to show you more in the coming months. Even though we won’t have the game ready before the end of 2020, we’ll be ramping up our communication about the game as it gets closer to release - there’s certainly plenty to talk about!

To kick off this new blog series we wanted to show you all a few new screenshots and introduce you to a little more of the weird and wonderful world of Eastward. If you’re dead set on avoiding spoilers then look away now! 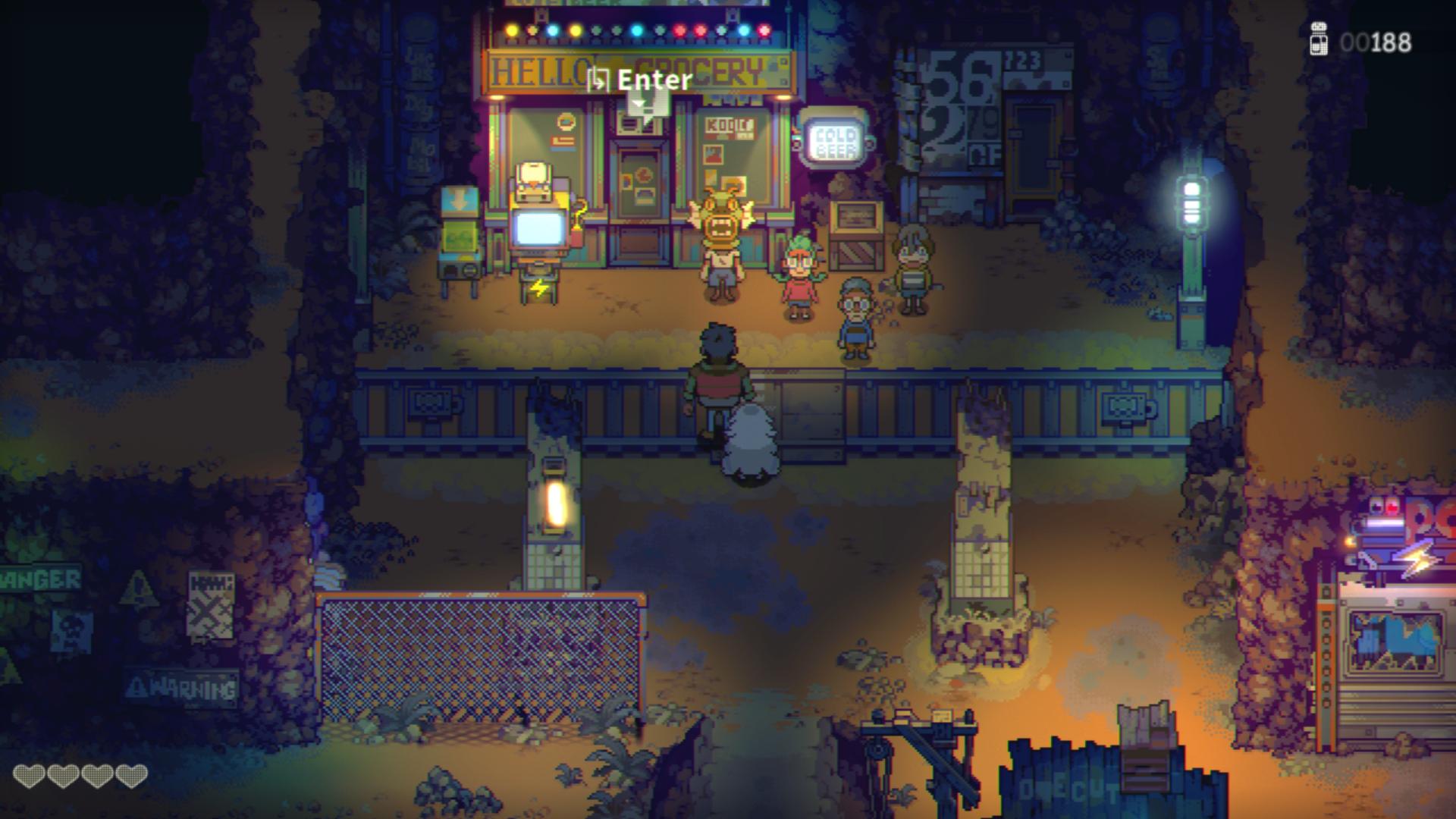 In John’s mining hometown of Potcrock Isle, inhabitants have spent their whole lives beneath the earth’s surface with no knowledge of the outside world! In front of Hello Grocery store you can see a gacha machine and Earth Born arcade unit, where you’ll be able to play Sam’s favourite monster-collecting JRPG. We’ll show you more of that soon! 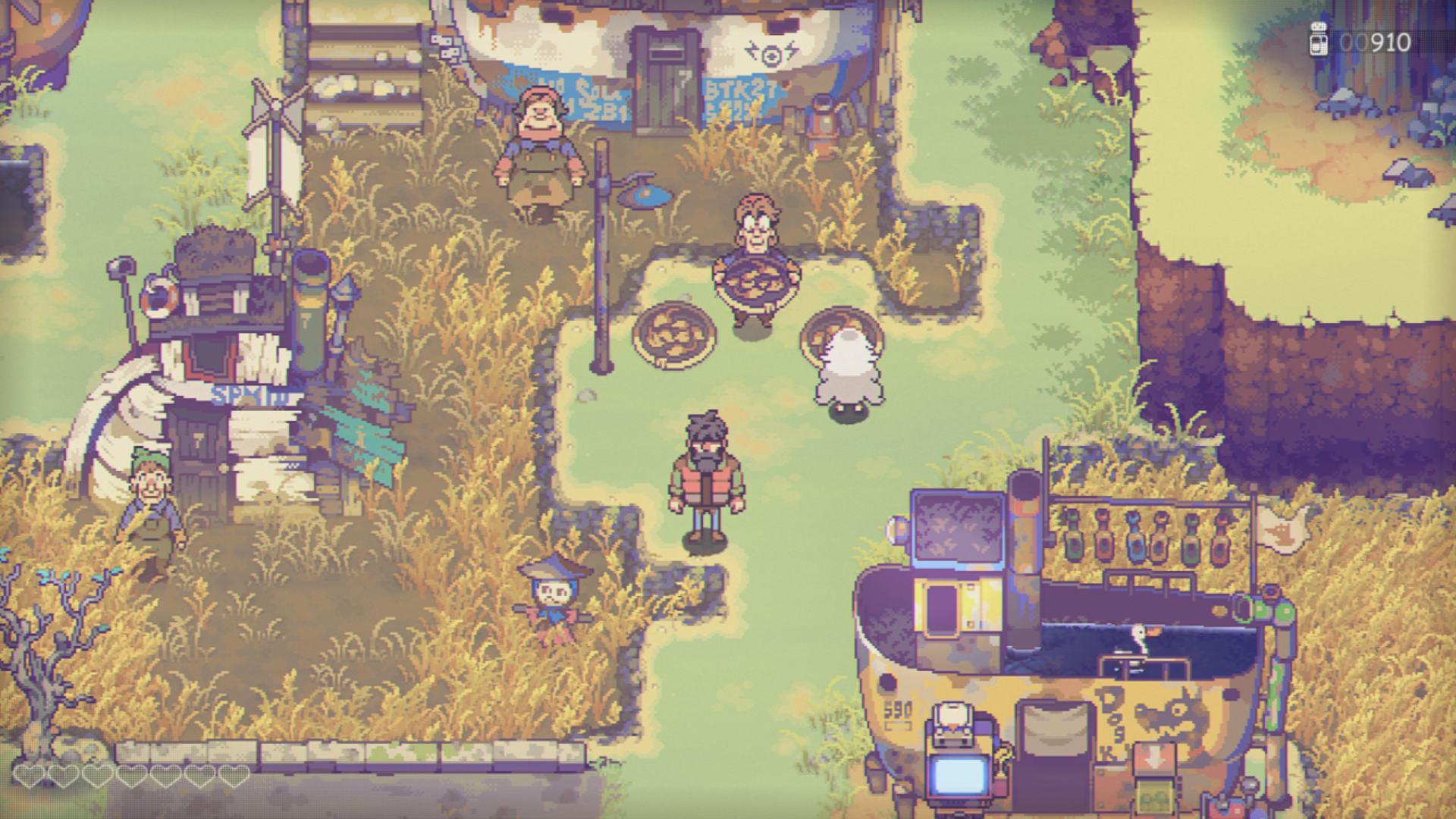 Welcome to Greenberg, a laid-back idyllic village tucked away in the middle of a forest. You’ll pass through these golden fields during the annual harvest time, and get the chance to meet some friendly locals! I’m personally a huge fan of how each of the village homes are constructed from rusting landlocked ships, some complete with their own majestic duck. 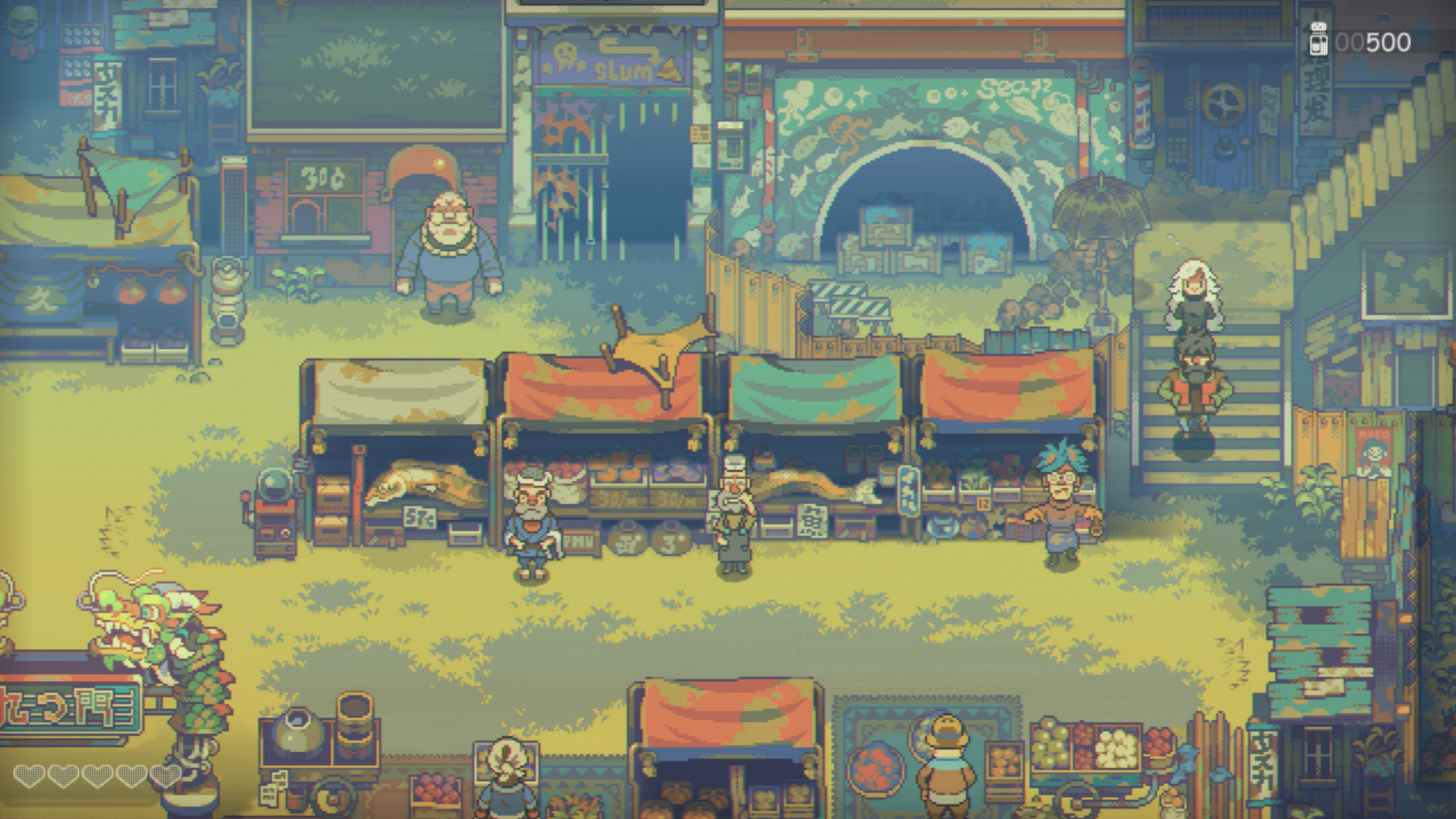 Not long after arriving in Damhill, the city’s food market will open, giving you access to a variety of exotic cooking ingredients (sandrupes and fire mints anyone?) as well as a notorious sewage system. Cooking is an integral part of Eastward’s gameplay, with lots of delicacies to discover and strange recipes to try out with various health, power and other secret bonuses - we’ll post a blog in the future to explain more about how it works! 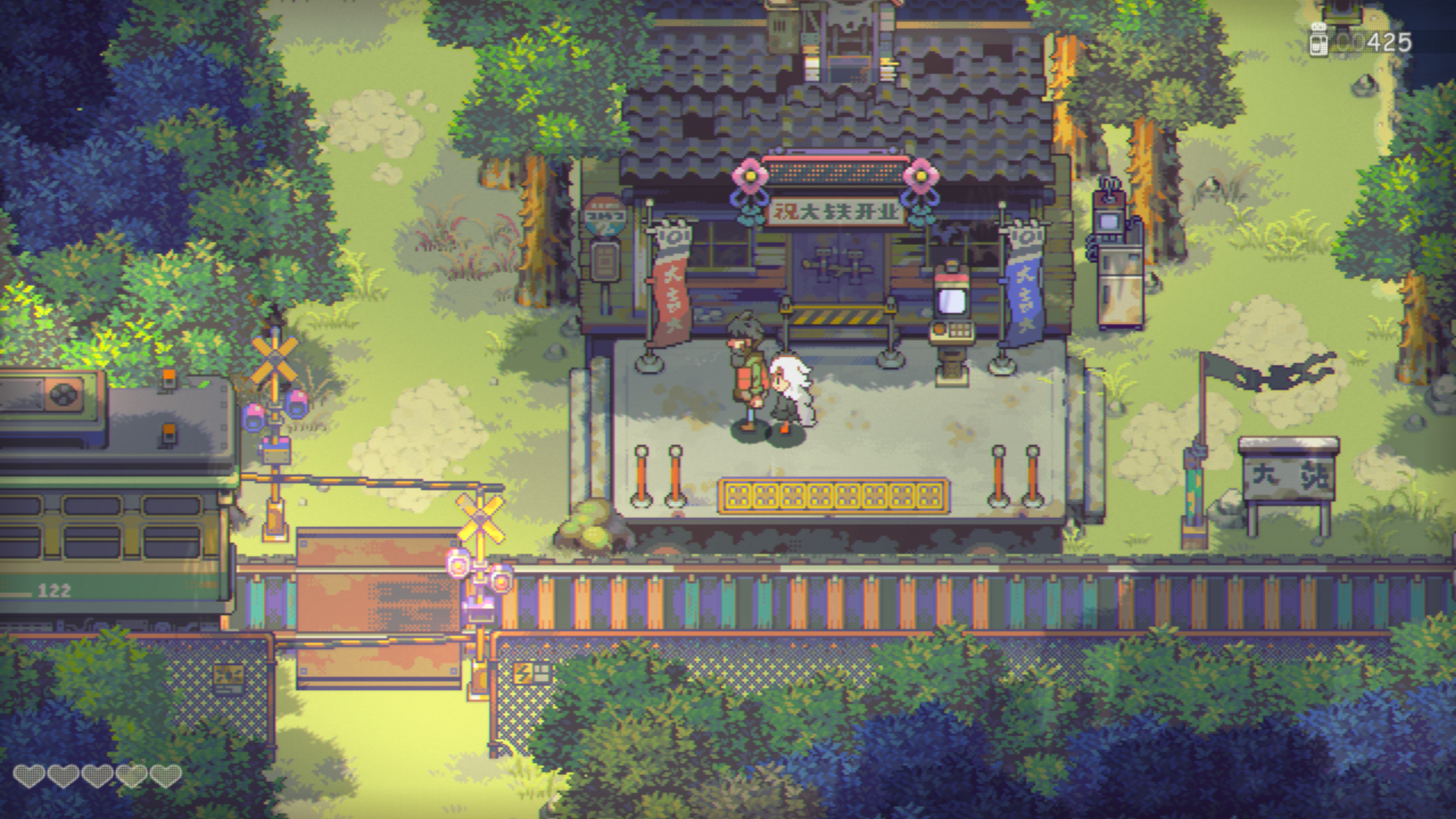 Throughout their adventure, Sam and John will be boarding a cross-country railway as they travel eastward (hehe) through the decaying landscape. But some stations and tracks need a little fixing up before they’re fully operational... 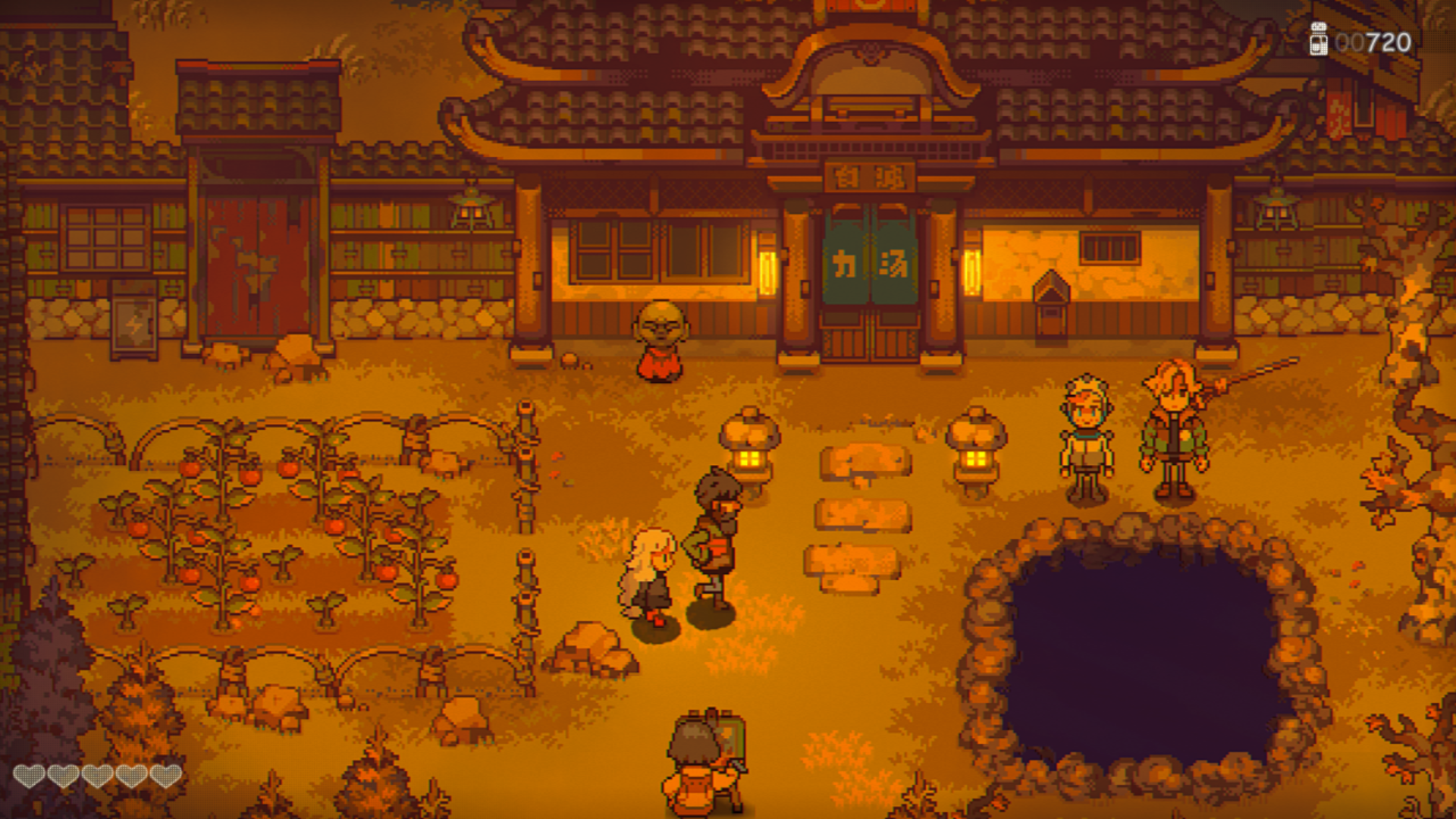 When you need to take a break from the hustle and bustle of city life in Damhill you can always take the train to this beautiful old bath house for a quick and relaxing dip. It’s run by a cute older couple who seem like they may also moonlight as passionate tomato farmers.

Eastward was also recently shown in a Japanese INDIE Live Expo II video showcase alongside many other fantastic indies - check out the video that was shown below!

Alright, that’s all for now. We’ve got much more lined up for you all as we approach the final stretch before launch. If you haven’t already, make sure you add Eastward to your Steam wishlist to get notified about the latest developments!

If you’re a streamer and keen to get early access to keys when they’re available you can request access by filling in our {LINK REMOVED}Content Creator form. You’ll also find answers and basic info about the game in our handy FAQ[eastwardgame.com].

Lastly, if you're as excited about Eastward as we are, come join the community discussion over on our Discord[discord.com] or Reddit, and follow us on Twitter for more Chucklefish gaming news.

We’re excited to announce that Eastward has been nominated for the Audience Award at the 22nd Annual Independent Games Festival!

Both the team here at Chucklefish and the developers Pixpil are really honoured to be included next to so many amazing games from 2019 and 2020 - if you're excited to play Eastward, enjoyed playing the demo or are just in a generally lovely mood, you can click here to vote[docs.google.com] - it only takes a few seconds! 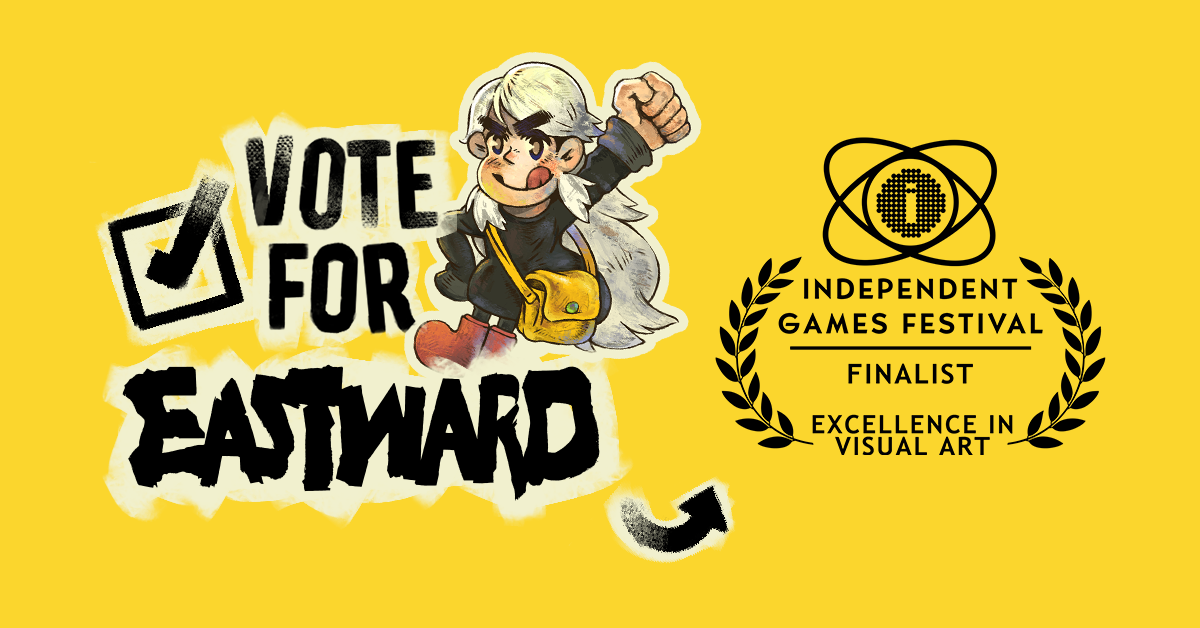 Voting closes February 10th, 11:59PM PST. We’ll have even more Eastward news and dev blogs as we get closer to launch, so keep an eye on this space...

Until then, have fun and thanks for the support!

Shinkatzu🍌🐒󠀡
Feb 22 @ 3:50pm
General Discussions
Eastward Demo Feedback Thread
Hey folks! -First of all, thank you so much for taking the time to play the Eastward demo today! We're really excited to share a snippet of the game early with everybody and hope you have a great time in Sam and John's world. If you have any thoughts, feelings, comments or feedback about your experience, feel free to drop it below. Thank you!...
74

Pilgrim
Feb 18 @ 3:41am
General Discussions
When will this game come out?
When is the approximate release date for this game?
40