Eons of War is a survival RTS with indirect control. Build a colony for autonomous spaceships, terraform and protect planets from star radiation, and survive against the waves of enemies from the mysterious Rift.
Visit the Store Page
Most popular community and official content for the past week.  (?)
Dev Update #30: The Economy in a Nutshell
Mar 5, 2021
Eons of War development is going swimmingly: game loops are tightening, graphics are improving, and sounds—well—are sounding better.

With this update, we'd like to start covering some of the core game mechanics and systems. The first topic is the in-game economy since it's used in many game loops.

Energy
Energy is used to power all of you space stations. If there is not enough energy then stations' efficiency steadily declines. This has different consequences for different types of stations. For example, shipyards will slow down ship production and sentries won't fire weapons as fast. 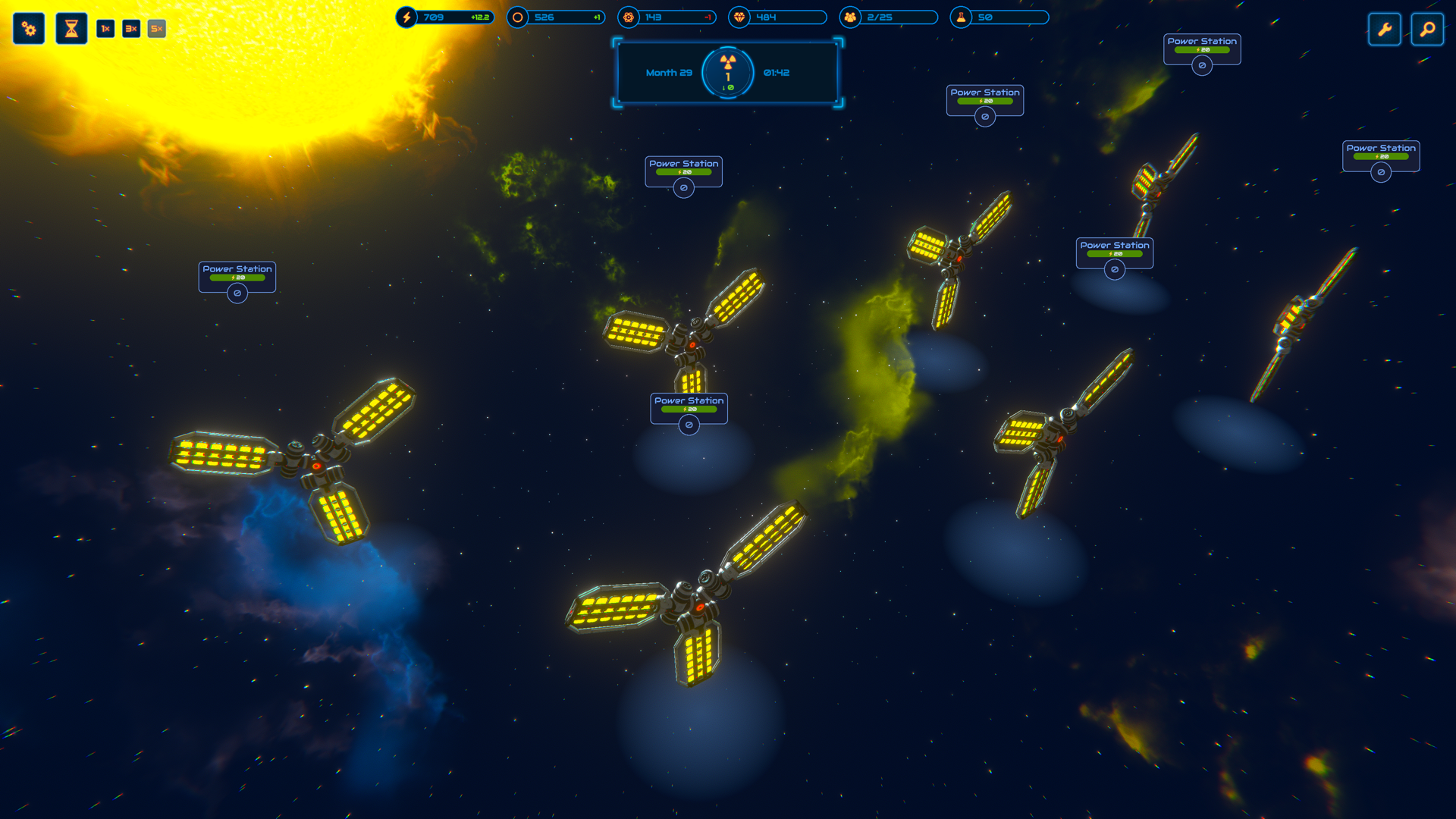 A cluster of solar arrays next to the Starbase.

To get more energy you have to build solar arrays. The closer they are to the star the more energy they generate.

Credits
Credits are used to pay spaceships for their services. If a spaceship is assigned to a specific location then it expects to be paid a salary. If you don't have enough credits then the spaceship's loyalty will decrease. Decreasing loyalty affects spaceships behavior, making them worse workers, and, eventually, if their loyalty drops to zero, they will leave the colony. 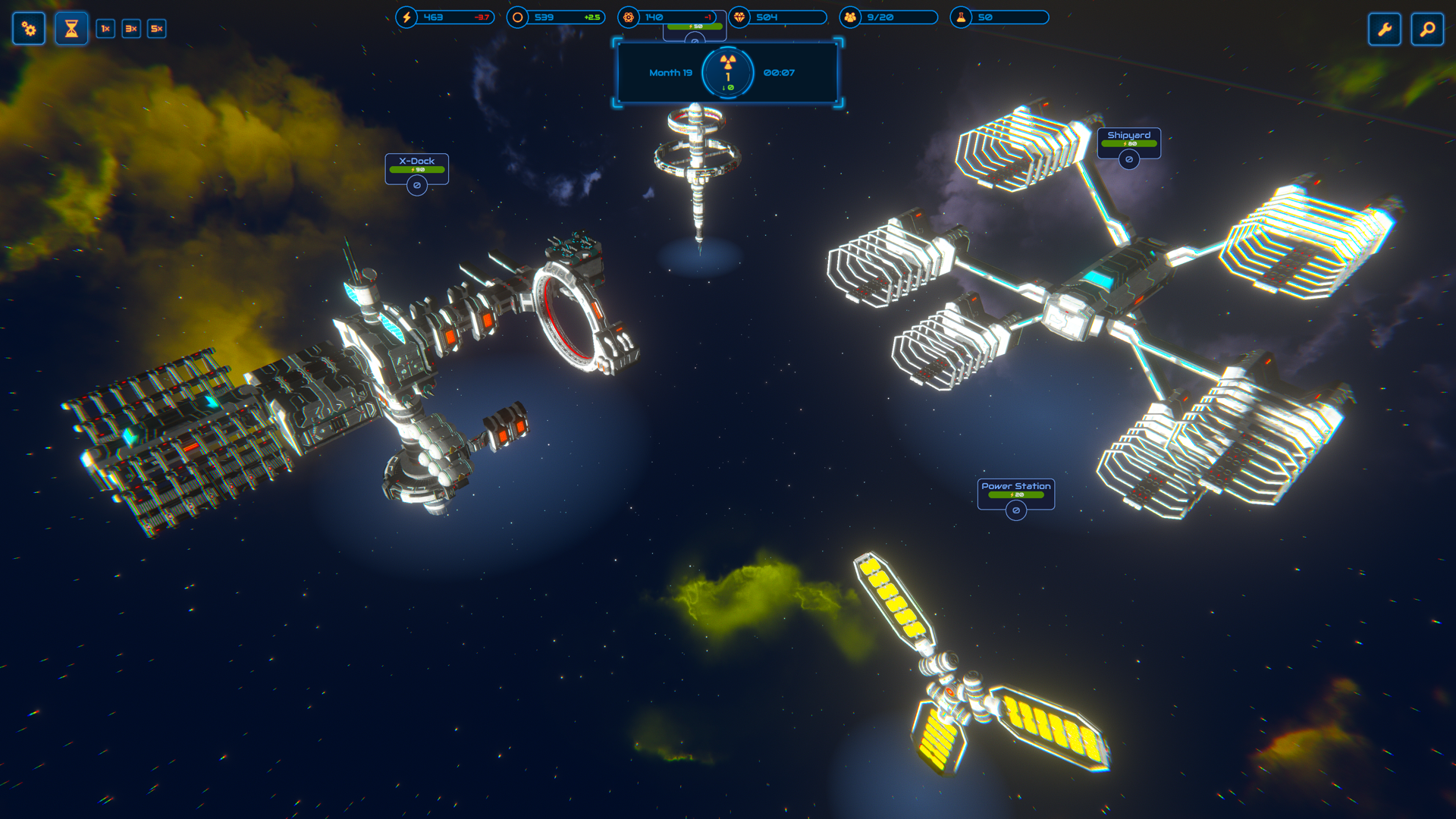 To earn credits, you have to build more stations at the beginning of the game. Later, once you research various improvements, spaceships will buy them from the colony bringing some of their earned credits back.

Minerals and Nuclear Fuel
Minerals and nuclear fuel are mined from asteroid fields and transported back to the colony by miner ships. 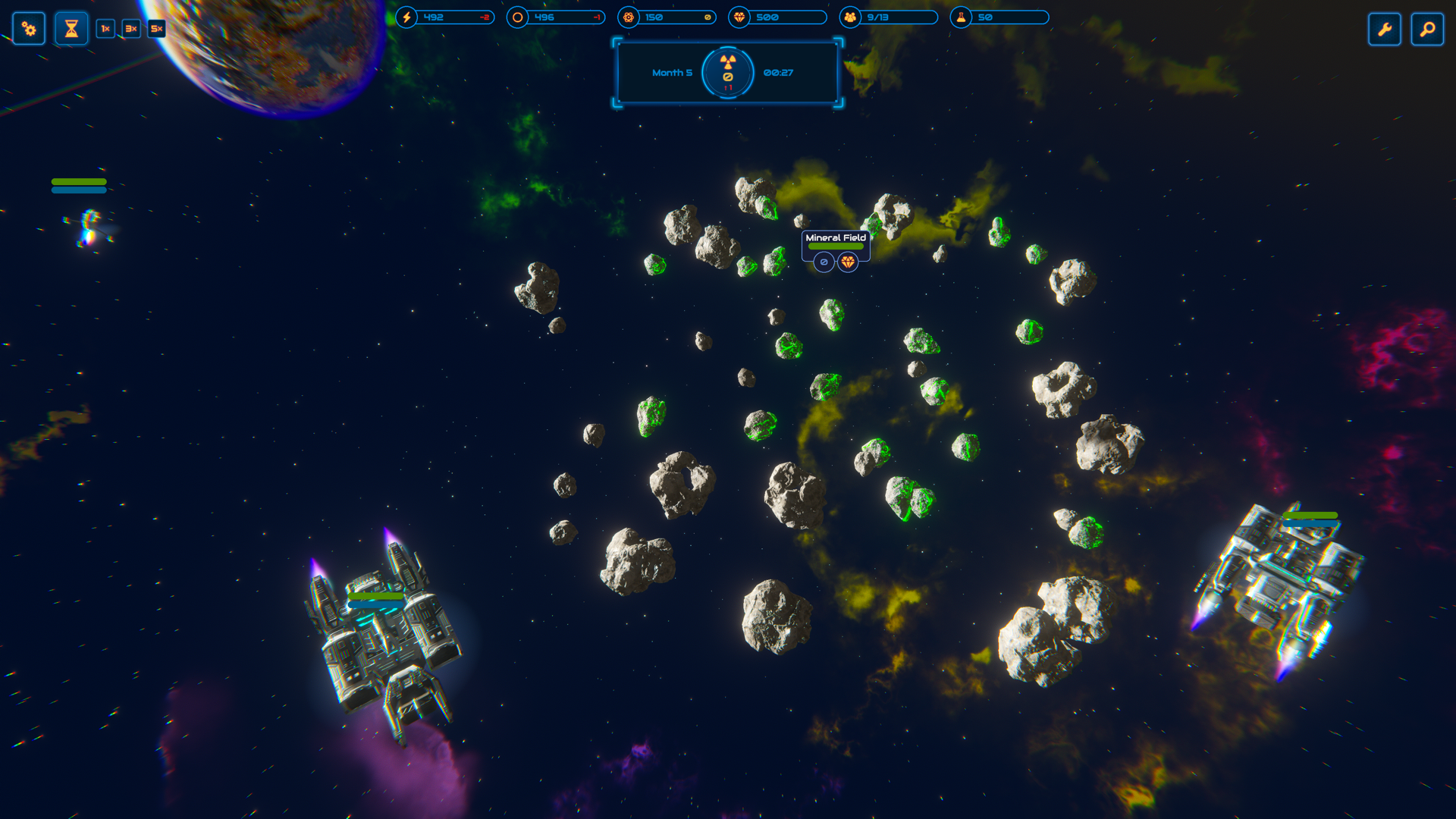 Minerals are used to build and repair stations. Nuclear fuel is used to power planetary shields during stellar radiation spikes.

Each asteroid field contains one type of resource and it's limited in quantity, so you have to explore the planetary system early in order to find more fields.

Miner ships have weak defenses, so it's always a good idea to guard them with sentries or the military.

Antimatter
Antimatter is used for special actions such as super weapons, station and spaceship repairs, and some others. 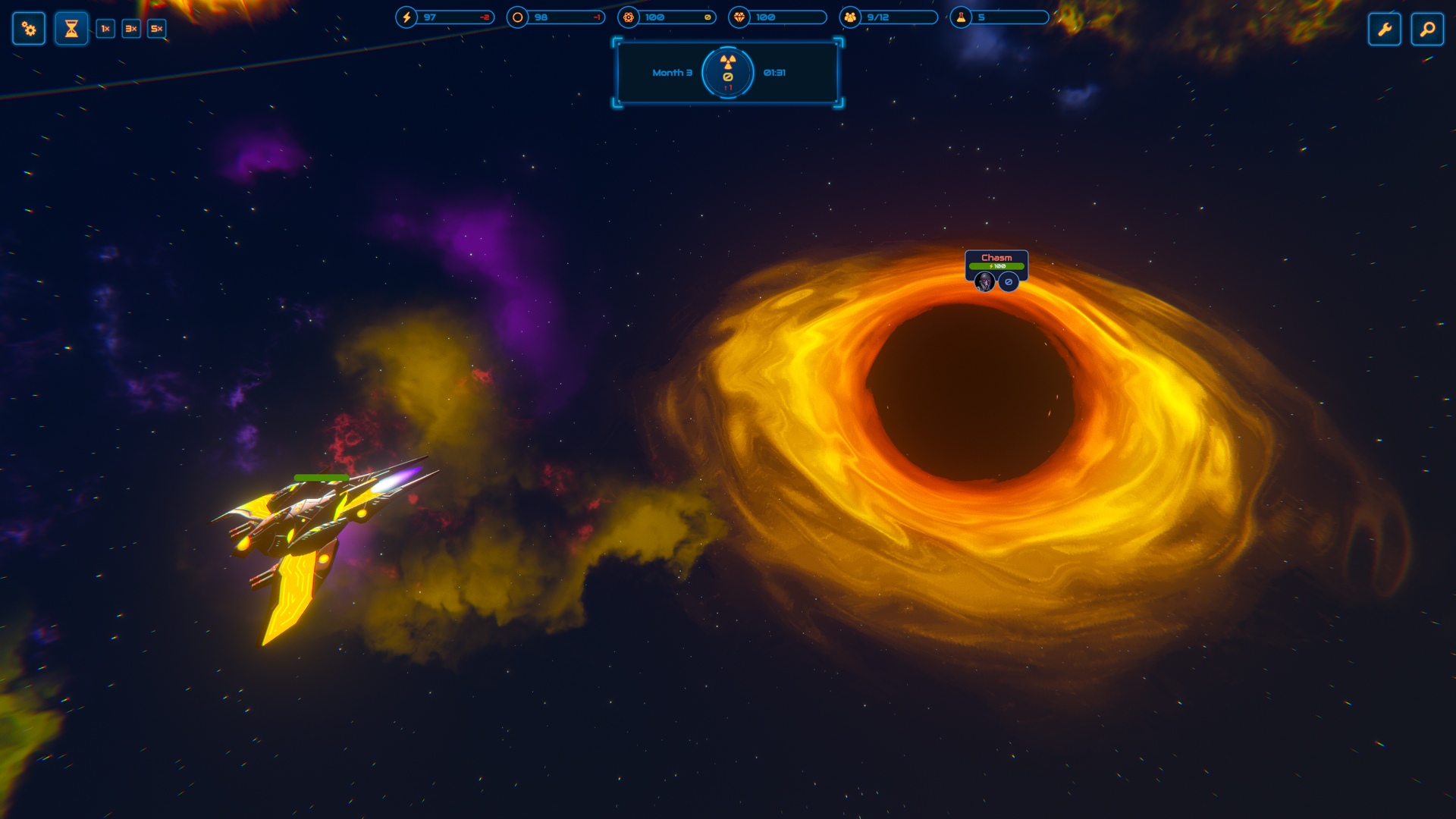 Planets are the only source of population in the game. As long as the planet is protected from stellar radiation by an active shield and enemy ships are not bombing it, population will increase steadily. There are improvements and some other actions you can do to speed up population growth but those are currently a work in progress.

Every planet has a population limit and if you've reached it, but you still need to build more ships, then you'll have to explore new planets and potentially terraform them if they don't support life. 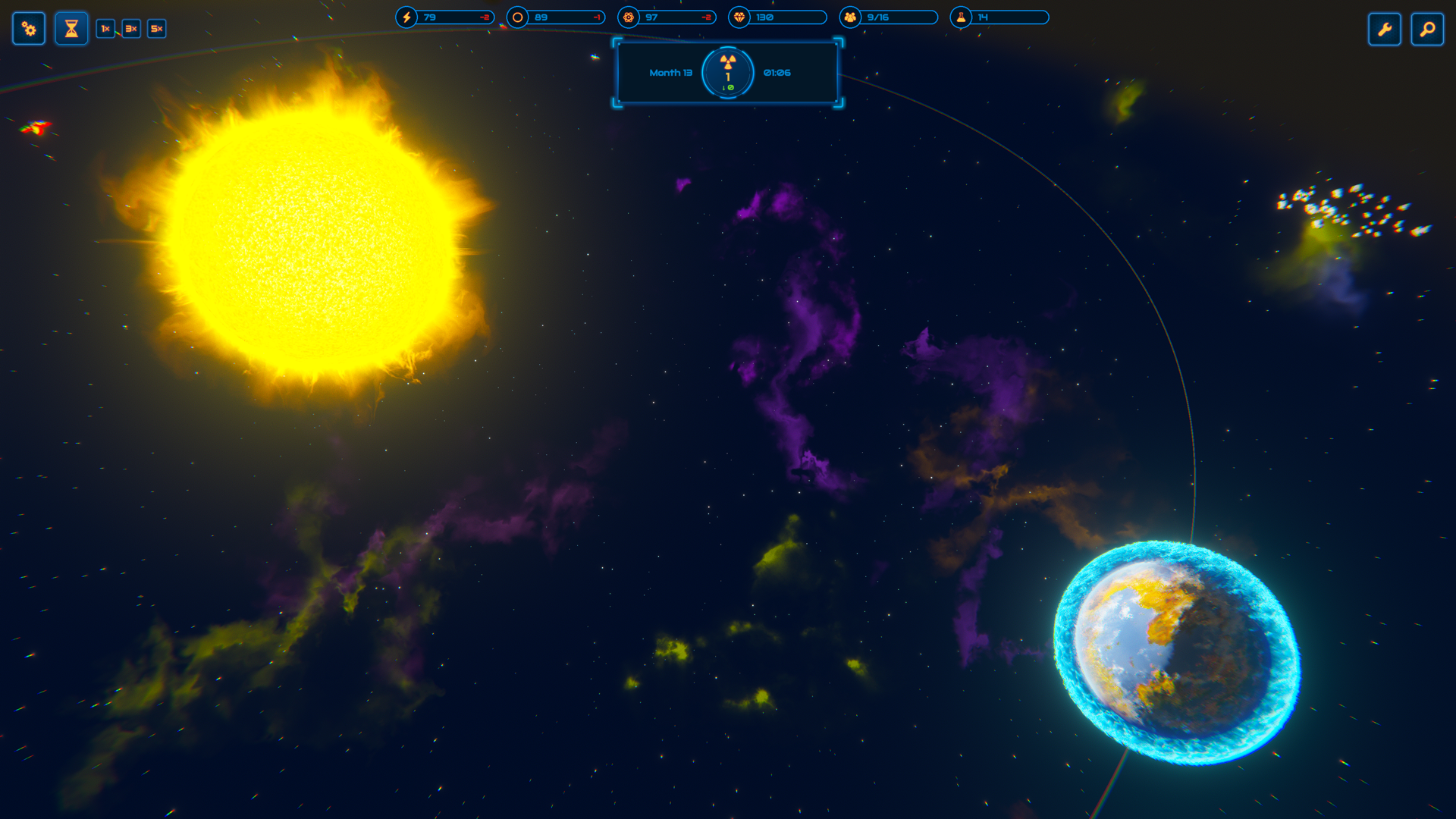 Planet protected by a radiation shield.

Eons of War
15
8
please say something
This game still looks good and its not been taken down yet. Are you still working on it? any details or updates?
4

Sous
Sep 20, 2021 @ 8:58am
General Discussions
Dev Update #29: Survival, Indirect Control, and Rogue-lite
Jan 26, 2021
After a long hiatus, I was pleased to announce a little over a month ago that Eons of War is back and it's being actively developed. We have an actual budget now to help us hit future milestones and contract out music, some graphics, creative writing, and marketing.

While parsing the feedback from the private beta players and doing more internal playtesting, we realized that the 4X game mechanics weren't compelling enough, so we started brainstorming how to fix it. After several months of churning through various ideas, we made the decision to change direction. Eons of War is now a real-time survival strategy with rogue-lite progression elements.

Whoa, that's a big change, right? It certainly is and we believe it's for the better. The updated game is in very early alpha and is already loads more fun to play. There are many more game loops left to implement but for the first time in over a year I'm very optimistic about the whole thing.

Let's take a look at some of the more exciting new mechanics and graphics!

Survival and Base Management
Survival became the main theme of the game. According to the new lore, stars in your sector of the galaxy started to "malfunction" decades ago producing intense radiation spikes that destroyed space equipment and sterilized planets, killing millions. 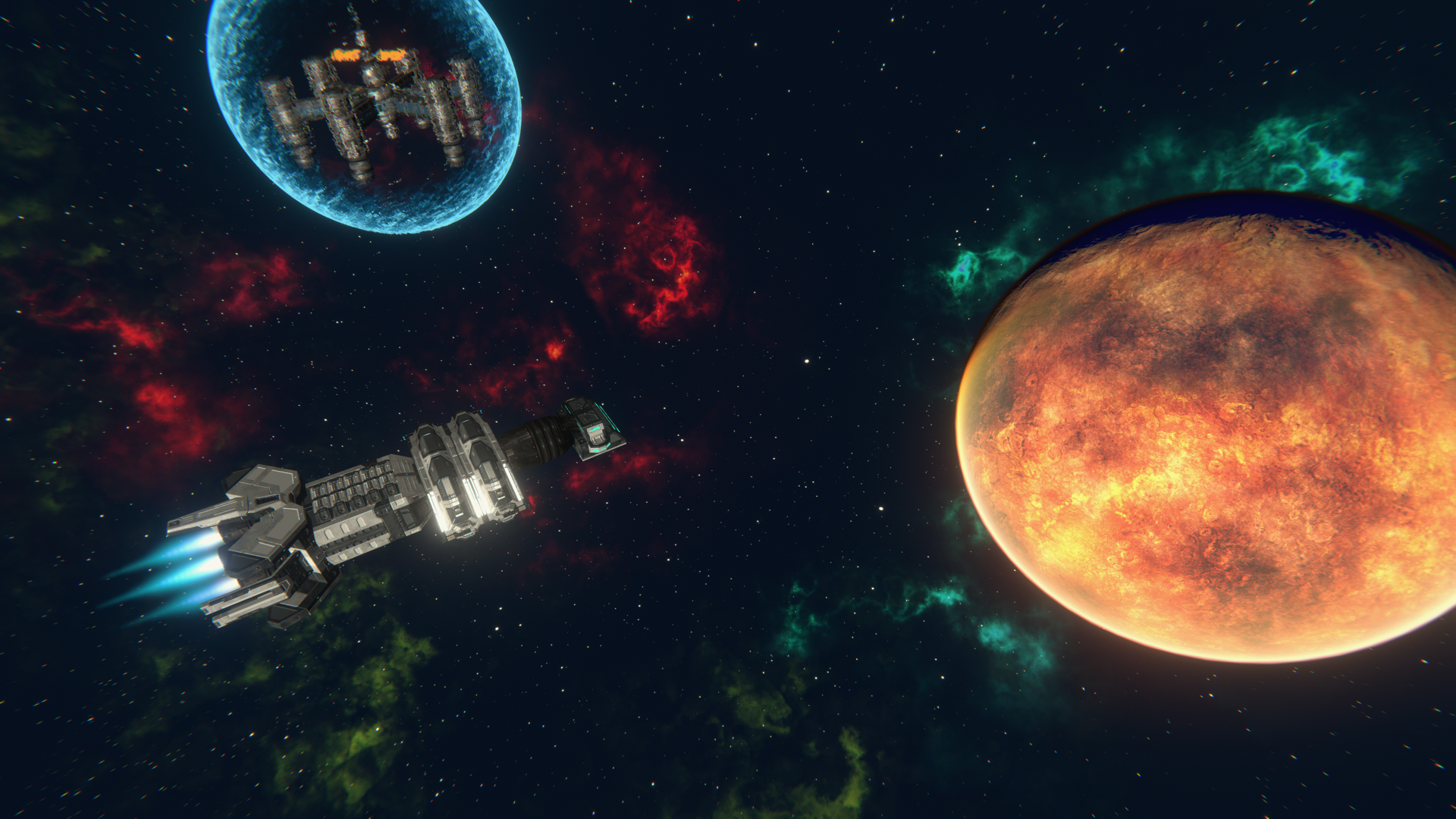 The most effective remedy to those spikes are giant energy shields that can be enabled around planets and space stations. Shields require thorium to function making it critical to find the right balance between typical RTS-y things (like mining resources, building out your base, and hiring units) and managing shield protection levels. A good analogy for shields is the generator and steam hubs in Frostpunk.

Autonomous Spaceships
As in any typical strategy game, you have to build units, but in Eons of War you also have to hire crews to pilot them. Crews require space credits to keep performing their tasks otherwise they might quit and you'll be left empty-handed. 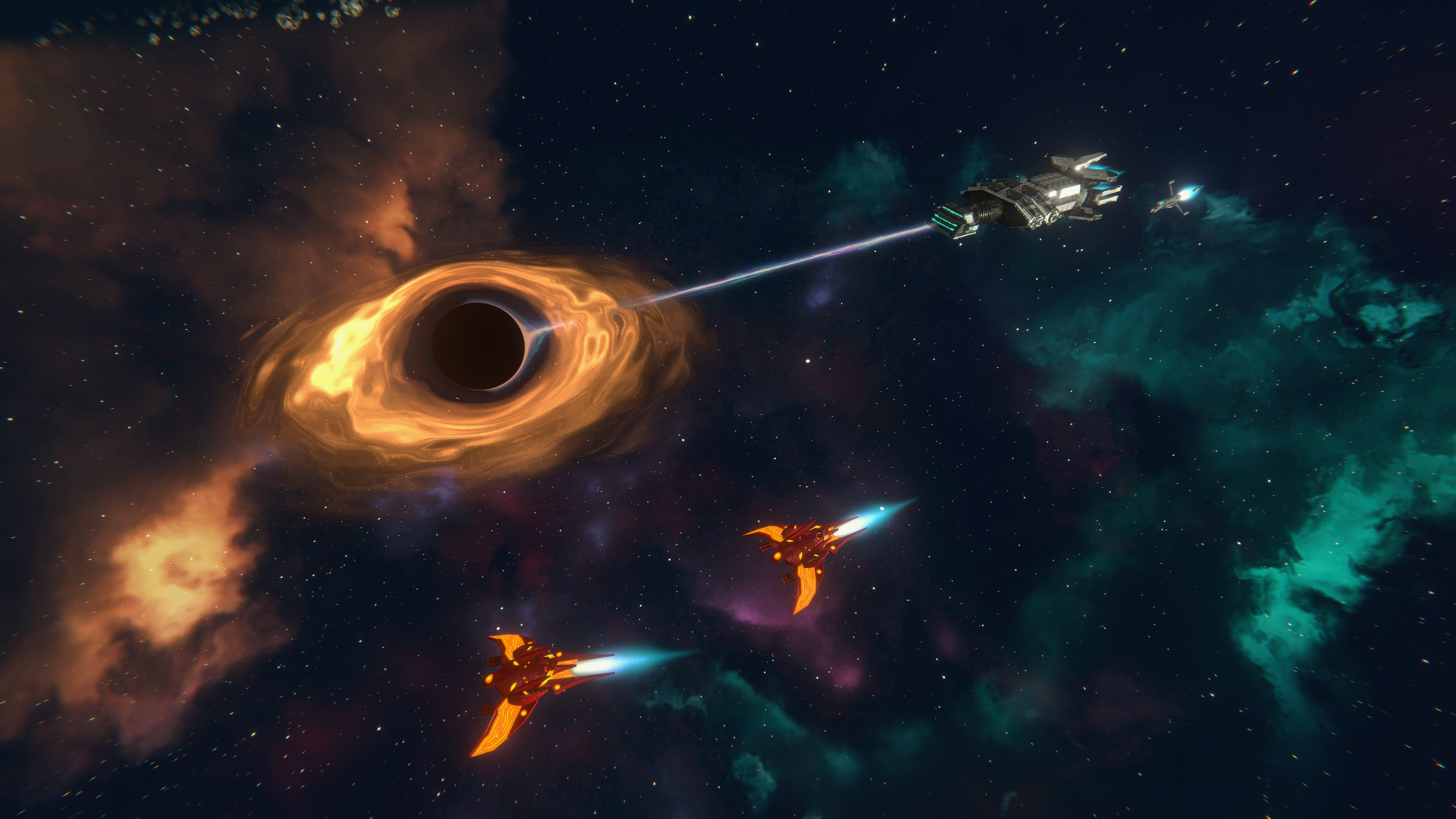 Spaceships act completely autonomously deciding themselves when to do their assigned jobs (terraforming, mining, exploration, battling, etc.) vs. having to perform upgrades and repairs with the money they've earned.

Rogue-lite Progression
To make level progression more interesting, we decided to add rogue-lite elements to the game. Just like before, all levels are procedurally generated for greater replayability. 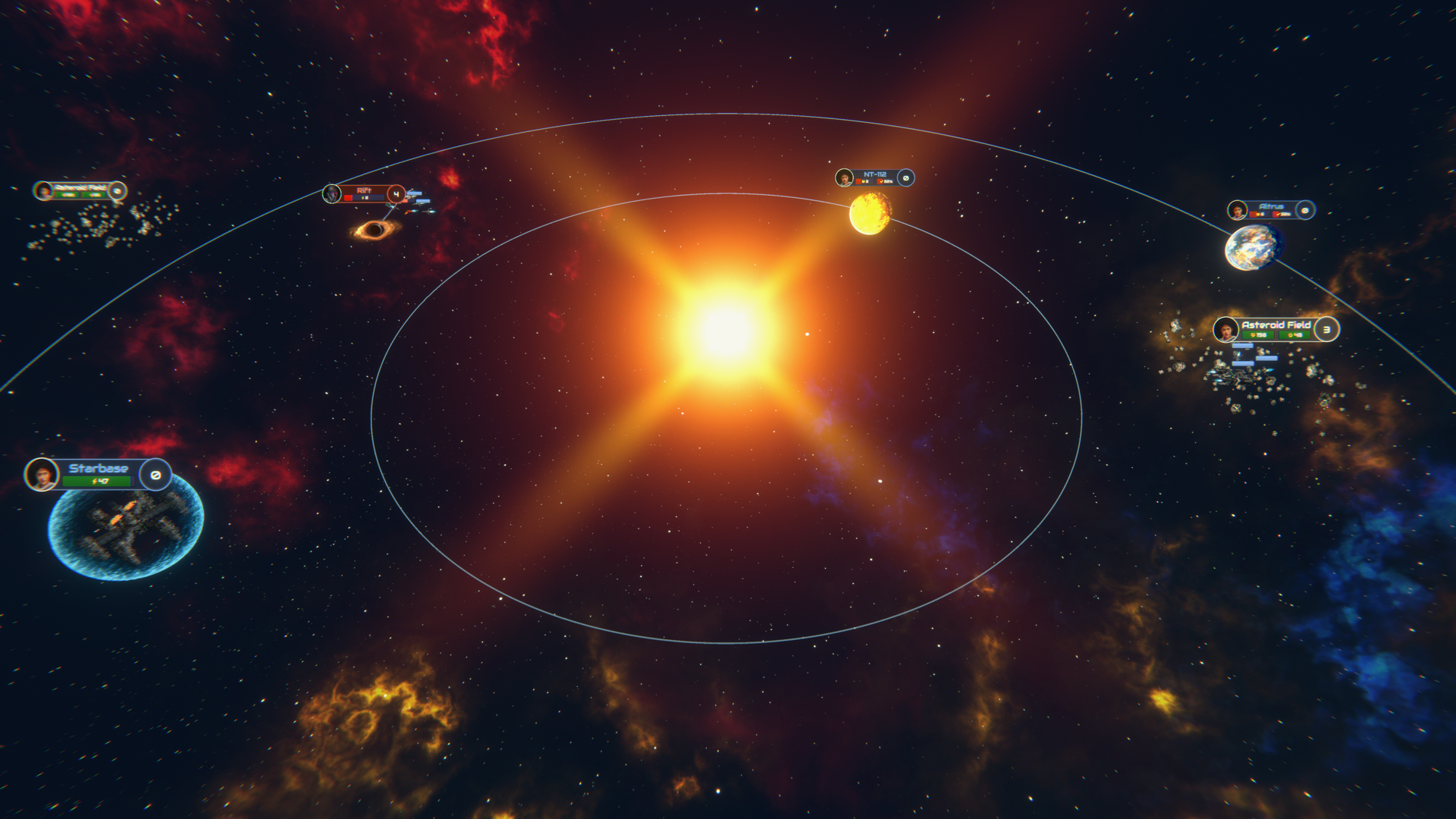 The story unfolds during in-game quests that you can either complete or fail. Some quests will reward you with resources and artifacts. Artifacts are special items that can be deployed on planets and space stations. As levels get increasingly more difficult, it becomes more critical to pick the right collection of artifacts to bring with you on new missions.

Hopefully, this gets you excited about the new direction! Our goal is to post monthly updates exploring game mechanics and features in more detail up until launch.

We are going to run a private beta in June 2021, so if you are interested please signup on our site:

First of all, I'd like to apologize to the whole community about keeping you in the dark for over a year.

Life and other projects got in the way of development but I'm pleased to announce that Eons of War is back on track. We've been making good progress addressing problematic game mechanics, writing code, and making things look pretty.

After weeks of brainstorming and deliberation I decided to make significant changes to the game across multiple dimensions.

First of all, Eons is not a turn-based 4X strategy game anymore. I know, I know...you've signed up for some 4X goodness in space and this might feel like a letdown but please hear me out first.

The game is now a real-time indirect control survival strategy with 4X elements.

All and all, it's a very good thing since the old vision wasn't working the way I wanted it to and, honestly, it just wasn't fun to play after a few hours. Even though the new mechanics are in the alpha stage, it's already way more exciting to play.

The premise of the game has changed as well. Now, you are at the helm of a space corporation in a planetary system constantly ravaged by abnormal solar activity. To make matters worse, an unknown alien civilization has been carrying out attacks on peaceful planets through temporary interstellar rifts that open and close seemingly at random.

As a player, you have to deal with the multiple crises that come in waves. You now get to hire different types of spaceships, manage solar flare shields, mine minerals, collect energy, research new technologies, and strategically defend and attack planets, rifts, asteroid fields, and space stations. All that in a constantly evolving planetary system with spaceships acting independently following their own agendas that don't always align with yours.

Where do we currently stand in terms of development? Since so much of the game had to be changed, it's going to be a few months until we run a private beta for select players again. The goal is to have a playable beta by June and to launch the game in late 2021.

In the next monthly update I will talk more about the new game mechanics and share some new screenshots.

Again, thank you so much for being a part of the community and supporting the game!

ocnuybear
Feb 18, 2021 @ 8:31am
General Discussions
Eons of War and other turn-based games
Hello, If it's alright with Vasily, I'd like to introduce you to our group Turn-Based Tactics as we've recently featured Eons of War in our community news: http://steamcommunity.com/groups/tbtactics#announcements We review dozens of games of the genre on our Curation page , share weekly news on Steam and Twitter regarding games in development, and maintain a release schedule of upcoming titles up to ...
1