Today we are introducing the new Update 1.0.4 to Esports Life Tycoon, featuring the following fixes:
We hope that this update improves your game experience. Also, don’t hesitate to contact us via Steam discussions and our Discord server[discord.gg].

Thank you for playing. See you in the Summoner's Ravine!
The UPLAY Online and Raiser Games Teams.


We encourage you to keep participating in the community by sharing your opinion and feedback on the Steam forums.

See you in the Summoner's Ravine!

Esports Life Tycoon
23
7
Celebrate the Worlds Finals with us! Are you Team DAMWON or Team Suning?
Oct 29, 2020
Dear esports managers,

The time has come, the Worlds Finals are here!

This year, the match to end all matches takes place during the scariest day: Halloween. It is fitting, then, that Esports Life Tycoon participates in the Steam Halloween Sales! You have until November 2nd to get THE esports manager featuring PSG, Heretics, TSM, Fnatic, and the current Worlds Semifinalist G2 Esports. at a 40% discount. Will you be able to carry your esports team to the very top of the competition?

This is the perfect moment to reflect on the season so far and experience your own professional journey as an esports manager in Esports Life Tycoon. What's your favorite team? What were the best plays in the competition? Which players stood out during the whole year? But most importantly...

Which team are you rooting for: DAMWON or Suning? Leave a comment below with your prediction for the Finals!
See you at the Summoner's Ravine!

Today we are introducing a couple of fixes to tailor the ultimate Esports Life Tycoon experience! You can check the changes introduced with the Post-launch Hotfix 1.0.1 right here:
We would like to remind you that this 1.0.1 hotfix isn't related to the previous 1.0.1 version. We started renaming the updates after the launch of Esports Life Tycoon to reflect its full release from Early Access.

Thank you for playing Esports Life Tycoon and see you in the Summoner's Ravine!

Some of you were asking why we changed the previous version 1.0.1 to the current one, named 1.0. This is just a naming convention adjustment: since the game is now fully launched on Steam, we named this update 1.0 instead of 1.1. As we detailed in the full changelog, the 1.0 is a superior update compared to 1.0.1.

Keep on keeping on!

Today is the day: ¡Esports Life Tycoon launches out of Early Access today!
Celebrate with us the most important event of Esports Life Tycoon by playing the new 1.0 Release Update. You only have until September 9th to get the game for just 11,99€/$, starting today at 19:00 CET/10 am PST, before the price increases to 19,99€/$ , so share the news with your friends and let the matches begin!

Here's everything we are introducing to Esports Life Tycoon in the 1.0 Release Update:

CHANGES TO ALL THE MAIN ACTIVITIES 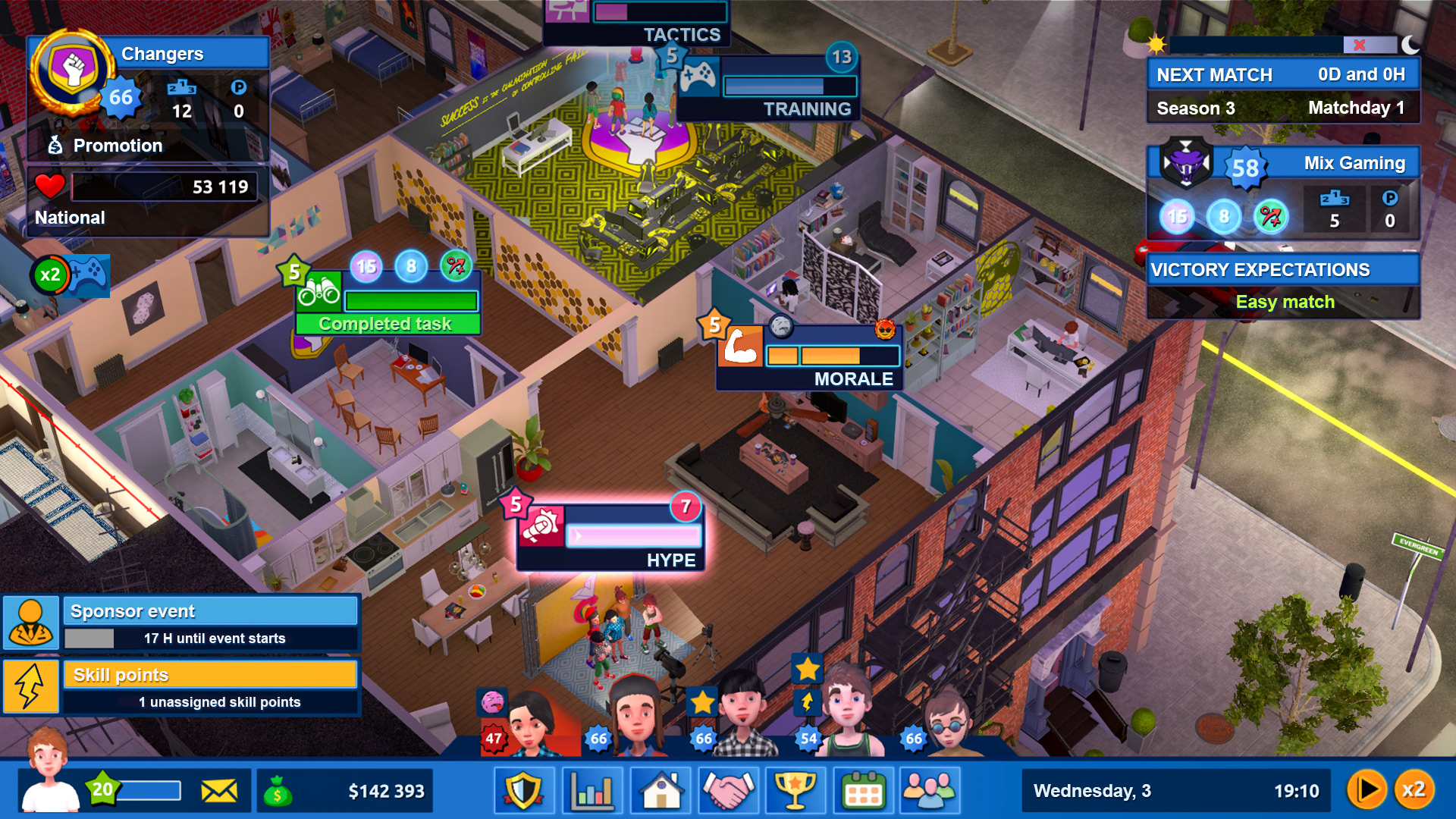 IMPROVED MECHANICS
Thank you for accompanying us on this development journey through the world of Esports. We encourage you to keep participating in the community by sharing your opinion and feedback on the Steam forums.

See you in the Summoner's Ravine!

Today, we are issuing you a critical quest. There are 7 esports teams who need your help, each one with their own trials and tribulations. As their new manager, you are in charge of reverting their situations, saving them from their own failures and leading them to glory! Are you the right person to redeem these players?

These are the 7 challenges we are daring you to face:

Update 0.9
We are also taking this opportunity to introduce several quality-of-life fixes to improve the overall gameplay experience and... gamepad support! You can now play Esports Life Tycoon with your favorite gamepad, we encourage you to try this new way of experiencing the life of an esports leader!

As we get closer to the full launch of Esports Life Tycoon, we'll look into your feedback on the Steam forums to tweak the Challenges and improve the game. We will apply these gameplay tunes before launching out of Early Access.

The U-Play and Raiser Games teams.

We are happy to announce a full, new game mode is coming to Esports Life Tycoon: the Challenges!

Each of the seven different challenges will introduce you to an esports team experiencing a critical moment in their season. As their new manager, you are the only one that can help them overcome their current situation and save the day!

These are the seven challenges we are daring you to face:
Injury plague 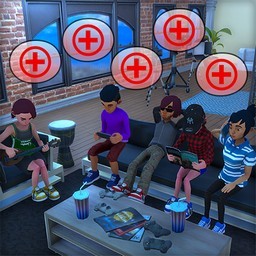 The season has started and four out of your five players are injured. Will you sacrifice precious victories to let them fully heal or substitute them with new players? You'll have to find a way to overcome this problem and accomplish the sponsor's objective! 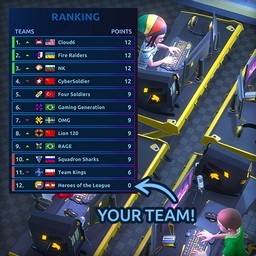 It's mid-season already. Our team is last on the leaderboard with 0 points. Only 6 matches remain… And you are the new manager in charge of reversing this dooming situation. Defy your fate and avoid descending from category!

The locker room is a battlefield 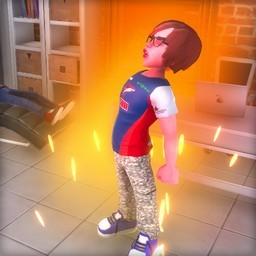 You have a great team, but your players LOVE THE DRAMA. Disaster looms in the locker rooms… Do you have the nerve to control your players' egos and take them to glory? 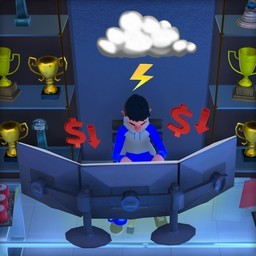 The team had a good first week and you're at the top of the leaderboard, but the previous manager emptied the club's coffers! Now, the directive has brought you in to fix these economic problems. A good leader has to make the toughest of choices: which players and staff members will you let go to survive? 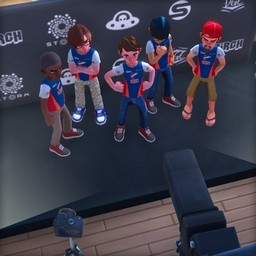 You've got the best players in the league. Heck, your team may even be the best one in the world! The expectations are so high that you cannot afford to lose any match. Become the best champion in history by achieving a perfect season! 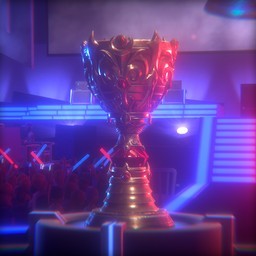 G2, SKT1, Fnatic, TSM... All the greatest teams in the world had humble beginnings. This is the time you start your own story. Win the tournament with a modest team of the inferior leagues and achieve your first feat as a legendary manager! 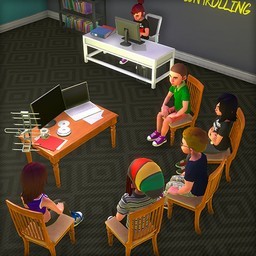 Your team promoted from Bronze to Gold League in just two seasons... But neither your players nor your economy can compete with the new opponents. Everyone thinks it's impossible to remain at this level... Prove them wrong. Face the overwhelming odds as a true leader and complete the toughest of challenges!

What's coming after the Challenges?
After introducing the Challenges in Esports Life Tycoon, we will spend some time testing them with you before leaving Early Access. This will indicate to us which Challenges you like the most and make the necessary tweaks to make them even more exciting.

Stay tuned to know more about the challenges, including their release date! Thank you, fellow esports fans!
The U-Play and Raiser Games teams. 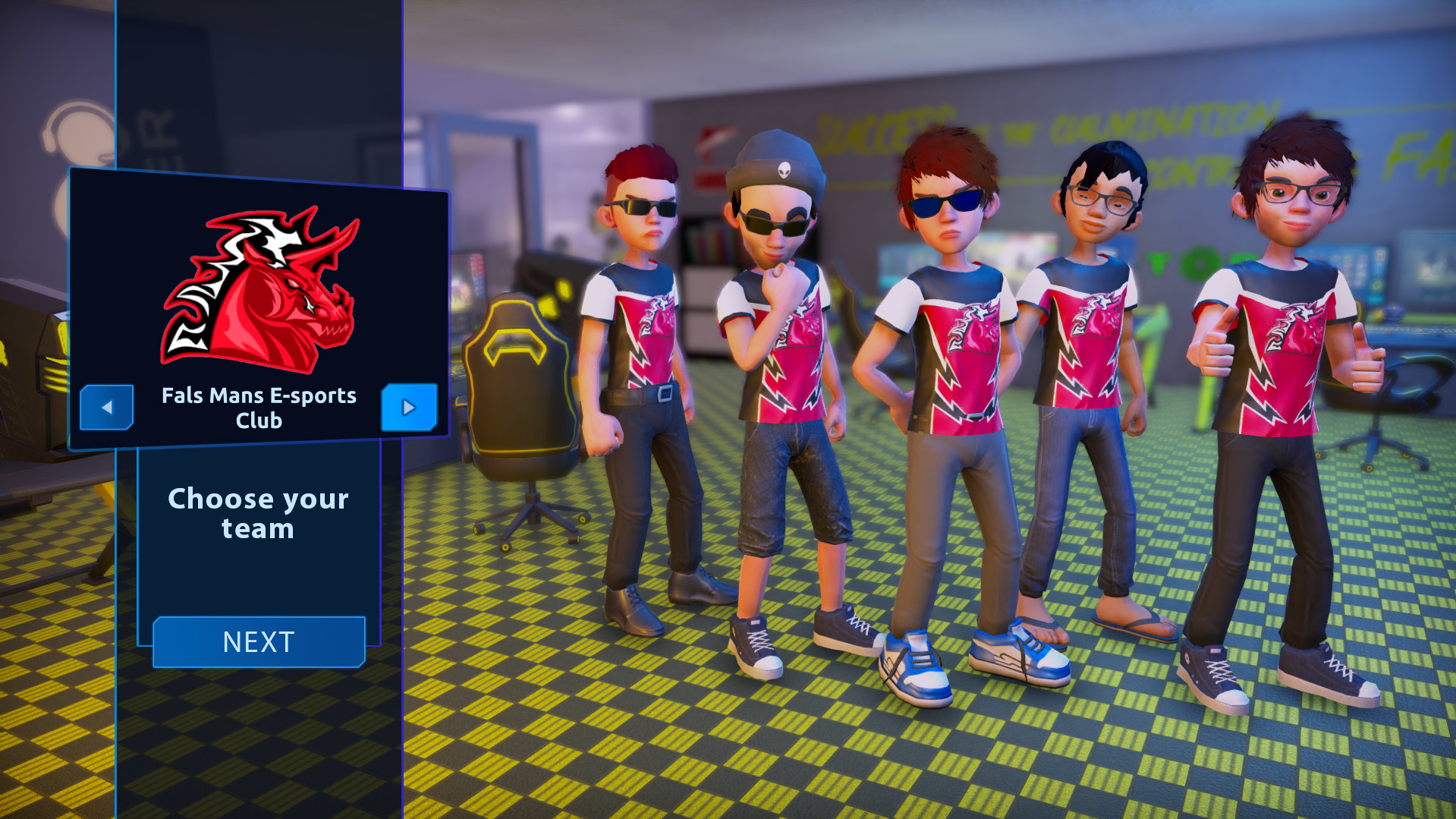 This new update introduces a couple of highly anticipated features, such as the inclusion of the champions of the beta competition as an NPC team, as well as the ability to monitor the rivals’ tactics.

Here’s a list of the new features arriving with this 0.8 Update:

Meet the beta champions!
Do you remember the beta we held some time ago? If you do, you may also remember that we promised the winners would be part of the game.

Well, the wait’s over: meet Fals Mans e-Sports Club, a team formed by Zetaka, kimura, DookieBrown and Thomasthegama, the four Esports Life Tycoon players who won that competition. Take a look at their unique crest and kit designed by Pau Fuentes, the winner of Beta Design contest.

They will be part of the Silver division – and they can’t wait to face you on the battlefield! And who knows, maybe you end up firing them, since all their squad members will be available for you to hire.

Congratulations to all the winners!

Change the course of the matches.
We also made significant changes to the live matches. Now, you can see how your rivals develop their tactics during a game. It means that you will be able to check how they are reacting to your playstyle.

The new live statistics feature will let you understand what is happening in the arena. And all this data will be useful for you as a coach: give orders more precisely to ensure that your team clashes the opponent!

New notification icons.
We wanted all the icons to look similar so notifications will now be more relatable to other icons in-game.

Bug fixing.
Because that’s what patches are for… aren’t they?

Parles català?
Since the development team is based in Barcelona, we have added Catalan to the available languages.

We hope you enjoy these changes, and we’re looking forward to your feedback and suggestions for future updates!

Thanks and good luck in the arena, coach! 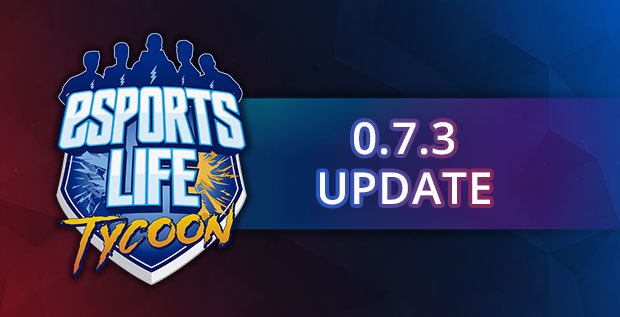 Dear esports fans,
Your suggestions are essential to making the game we all want. We hear you, and that’s why we bring you a new patch full of improvements based on your feedback.

We hope all these upgrades will make your game experience even better! And, of course, don’t hesitate to contact us via Steam discussions and our Discord server[discord.gg].