The most realistic FPV simulator of the market ! Let's pilot a virtual immersive drone and race with many other players !
$17.99
Visit the Store Page
Early Access Game
Get instant access and start playing; get involved with this game as it develops. Learn more.
Most popular community and official content for the past week.  (?)
The Winter Patch & Physics V2 (V0.5.4.5)
Dec 21, 2018
Hi eveyone !

Today, the Winter Patch (V0.5.4.5) is now available!
In this version, the major update is the new physics which has been entirely remastered.

Physics V2 and ENSMA
EreaDrone has now an entirely new physics system thanks to the ENSMA (National School of Mechanics and Aerotechnics).
The drone has now a better drag, better acceleration, better fall, etc...
It has been made to be the closest possible to the reality. The simulator is now great for freestyle too. Just try it and you'll see ;)

FAI World Drone Racing Championships 2018 Shenzhen map
For the FAI WDRC 2018 Shenzhen, EreaDrone has been chosen by the FAI to be the official simulator of the biggest FPV event.
During this race, 128 competitors from more than 40 countries participated.

Originally posted by Rudi Browning, Winner of the FAI WDRC 2018:
I think EreaDrone is one of the most realistic I've tried and was great for remembering the course!

Originally posted by Killian Rousseau, Winner of the FAI Drone Racing World Cup:
J’ai pu mieux me repérer et avoir de bonne trajectoire grâce à ce simulateur.
I was able to find my way and have a good path with this simulator

Originally posted by Thomas Bitmatta, Third at the FAI WDRC 2018 qualification:
This was the first time I used this simulator. Could pick it up and start flying in the really quick and was easily able to learn the FAI Shenzhen track with it!

Originally posted by Vicent Mayans, Seventh at the FAI WDRC 2018 qualification:
For me, EreaDrone is one of the best sim because the tracks are really the same that in the real. The Top of realistic simulators

Factory map
The Factory map is the all-new freestyle map! This map contains many little gaps and, the most interesting part: a Train!
This map is 500m by 500m.

New logo and UI
The design the simulator has entirely changed to a more modern version of it. The UI and the logo has been entirely remade.

Multiplayer mode with lobby and rooms
Hidden during a few months, the multiplayer mode is now available. You can create or join a room to play and compete with your friends! 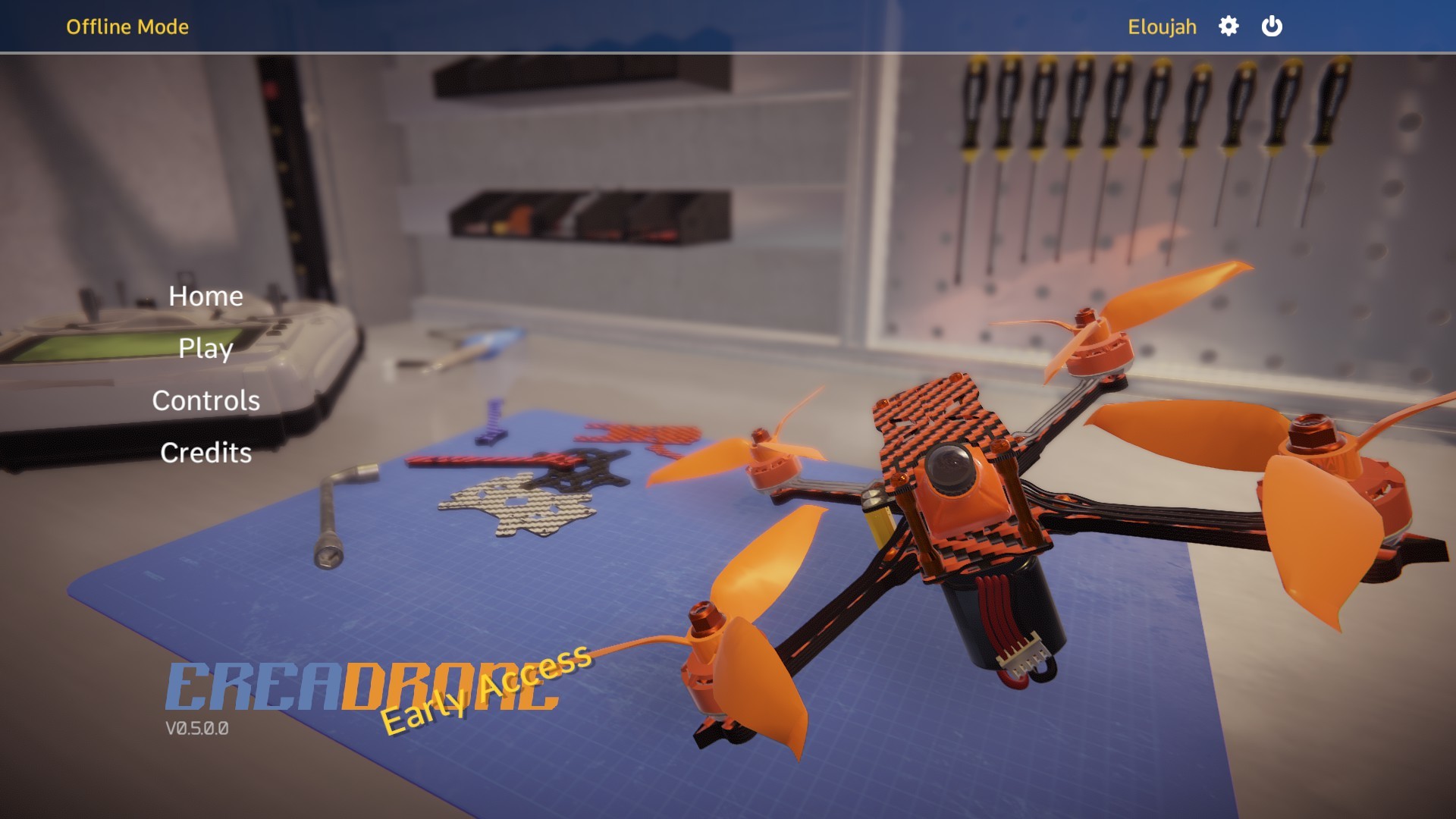 Hi everyone !
The version 0.5.0.0 is now available to download.
You can now practice on FAI Daegu 2018 track before the real race !
The majority of known bugs are fixed.

Here is the change list:
FAI DAEGU 2018 TRACK
Let's now practice or just let's have fun on this new track !
The FAI Daegu 2018 is a race of the Drone Racing World Cup which will take place on the 7 to 9 September.

NEW MAIN MENU
The main menu is now entirely new with a new scenery.
All the minor bugs of animations, buttons, etc, are fixed.
The menu is the first step toward a big future feature of the simulator.

NEW UI (INTERFACE)
The UI has been entirely remastered to get a better and homogenous design and also to remove all the known bugs.

NEW PHYSICS BEHAVIORS
We flew a lot to compare the simulator and the reality.
The physics behaviors have changed a lot to get a better fall due to the gravity and get a better inertia.

MOTION BLUR AND MINIMALIST MODE OPTIONS
You can now enable and disable the motion blur to get a better performance or even enable the minimalist mode which removes all the trees and grasses of a map which has a track to get the best performance (multiply the FPS by 2-3).

TRACKS ON THE FIELD OR IN THE STADIUM
Are you bored of the empty field with only the track and few trees around ? Do you want it in the stadium ?
Now, you can choose for each track where you want it between the field and the stadium.

BETTER GRAPHISM
The graphics are now more realism than before.
The textures are more beautiful. The motion blur is better.
And all this is optimized !

KNOWED BUGS FIXED
We forced everything to list every bug. And now, they are now fixed ! 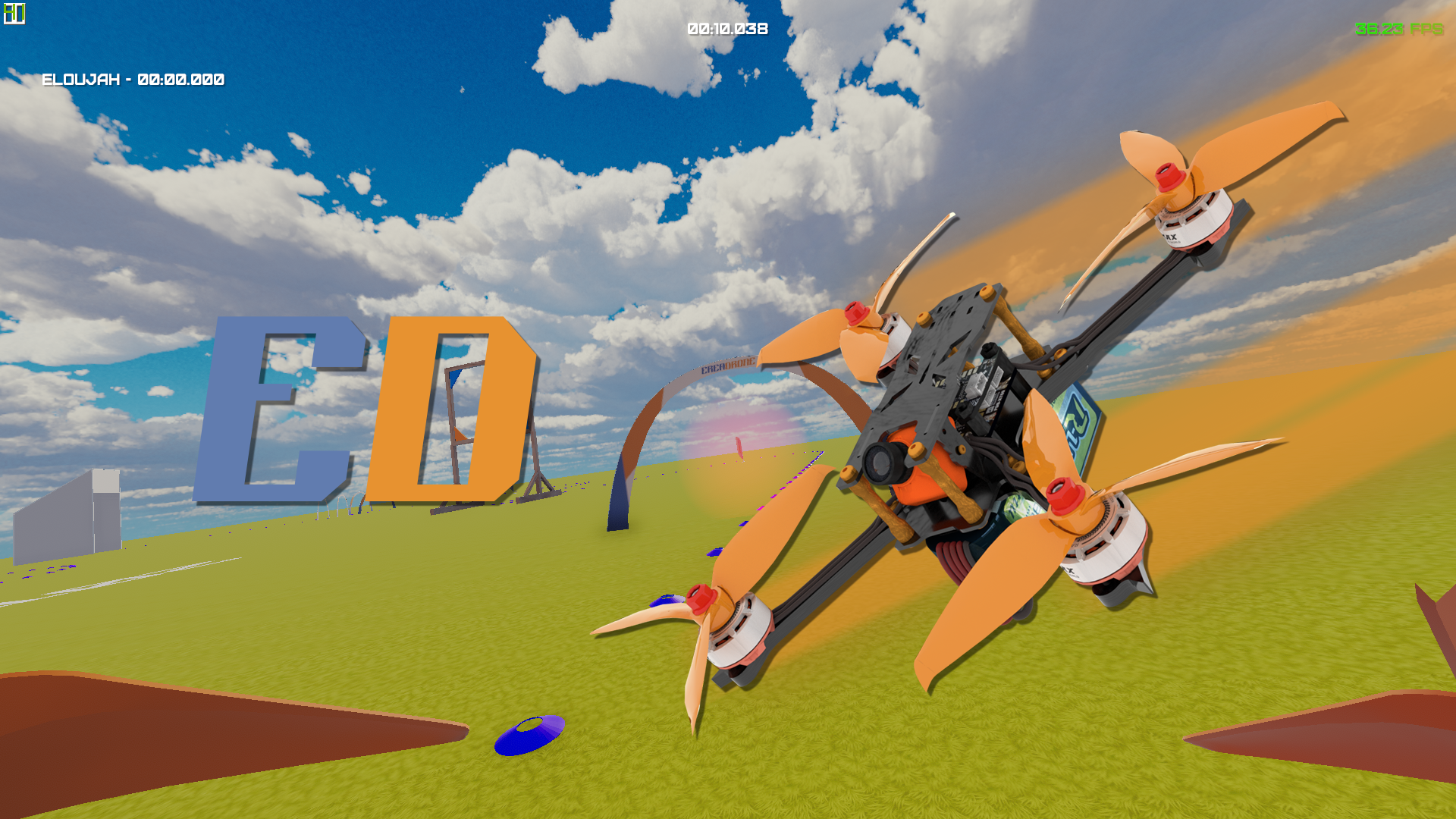 Hi there !
We are proud to announce you that the EreaDrone Simulator is now available on Steam !
We will try to make a lot of improvement during the early access state but even after this, we will continue to make the game better !

Have a good day and fantastic flights !

EreaDrone
3
2
Cannot arm
No matter if I turn of "arm with switch" or not, I cannot get motors to arm at all. Have tried with Flysky, Taranis, and Xbox 360 controller. about to give up.
8

RotorGrrl
Apr 11, 2020 @ 11:25am
General Discussions
Is this worth picking up while it's on sale?
I have Liftoff, DCL, DRL, Velocidrone... For 8$, is this worth adding to my collection? Sounds like it has issues with not saving controller calibration and I've seen some posts where people have said that they can't get supposedly supported controllers to work. I use a Taranis x9d plus connected via XSR-USB wireless USB dongle. Shows up as a game controller in windows 10 and my other Sims pick it up as a Taranis. Any input appreciated. TIA!...
3

Tones
Apr 23, 2020 @ 1:19pm
General Discussions
how to connect transmitter.
i have Jumper T8SG and i cannot connect it into the game. Can anyone give me tutorial to do that.
4

zacutesz
Nov 24, 2020 @ 6:19am
General Discussions
Change FC parameters
Hello how to save changes in FC parameters ? it dont keep mmy rates when i return flying after a rrrate change .... :( for those who have a arming issue, it's just because the channel travels arent good, look the sensivity :)
2