Here's a breakdown of the update:

Feedback is welcome!
Especially through the forums or on https://discord.gg/qN9J5f4

Thanks, everyone!
Have a wonderful week ahead!

A key focus of this update is making equipment much more satisfying to loot and use.

These stations provide you with a way to adds modifiers to your equipment.

You can upgrade your equipment multiple times during a run, but only once per forge. Forges allow you to upgrade 2-3 items at a time, to encourage you to experiment with more tools.

Item Modifiers:
These change how your gear behaves: from piercing arrows to recharging shield gauntlets.
Or occasionally freezing enemies to sending enemies flying!

Modifiers can be applied to any of your items (except consumables, regular boomerangs and powers). Feel free to experiment with over 15 of them across more than a dozen items!

Altars and Treasure Updates:
An altar will generate several items that you'll need to choose between.
This may be equipment items or runes you don't have yet or consumables. There are well over 40 possible items! 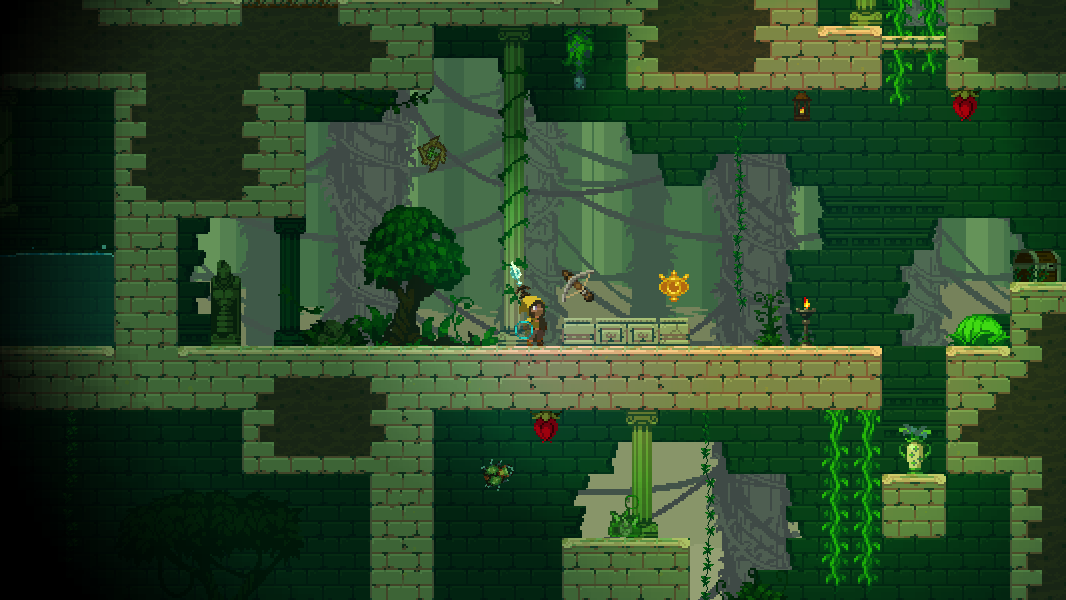 In the past, most items would not spawn in-game until you had unlocked it as starter equipment. We realize this was a mistake, as it prevented players from experiencing a core part of the game until much later.
To remedy this locked items still have a chance to spawn in altars and chests, (just at 1/10th of their regular probability if locked)

To make things more interesting, equipment that you loot from the world (e.g. altars, bosses and large chests) will usually have random modifiers attached to them (not all of them positive).

Potion of Luck: Increases your luck for a substantial period of time (see below)

Flask of Frost: Freezes any enemy that you attack! Just be wary of the temporary
resistance to ice after thawing.

:
May the odds be ever in your favor! Luck increases the chance of good things happening while fighting, forging, and other activities.
It's always possible to win the game with good skill and poor luck, however, it pays to have an edge.

Some of the effects that luck has includes:

Various actions in-game, such as opening all chests in a level or slaying a boss, will increase luck for a time.

Dodging and critical hits:
There is now a chance to dodge attacks (despite them touching you) and a chance to deal much more damage to the opponent.
Factors such as luck, acrobatics, runes, and equipment modifiers all affect this.

Quick Buff:
So you told us that during an emergency, it took too long to find and quaff down the potions you needed to survive. Drawing inspiration from other games, we found that a shortcut to drink all positive potions addressed this quite nicely. No more fiddling around with the inventory grid or weapon wheel, simply hold down

on keyboard or gamepad by default (gamepad will default to using quick heal button on next load).
Other changes:
Feedback is welcome!
Especially through the forums or on https://discord.gg/qN9J5f4

A shout out to our awesome testers:

We hope that you enjoy the updates and keep well during these strange times!

Aura of Worlds
18
1
Alpha Branch Updates
Aug 9
New (& experimental) features
We're trialing a plethora of new features on the alpha branch.
So what are the changes...they're a secret. We won't spoil what they are before the update's full release. Though one addition is a system for upgrading your gear ⚔️ during a run!

"What's in it for me for reporting on the builds early?"
Is it stable?
The latest builds been tested for hours, and it's about as stable as the previous update set in May (alright...more like 90%). Let us know if we missed anything!

Please report all issues in the Issues and any complications to this forum:
https://steamcommunity.com/app/841600/discussions/1/

Have an awesome week ahead!

We’ve been enhancing the engine and adding support for Mac and Linux. Making the game available to people on different platforms has always been a critical goal with this project. We are thrilled to finally provide stable builds on each platform. Anyone playing the game on Mac or Linux before the 9th of May will receive an in-game XP bonus after the event.

Engine work
Lowering the specs required to run the game (though it may not run on a 🥔):

🎼 New Music 🎵
Since we last spoke about music we've added several tracks, courtesy of the talented Mat Dwyer. Here's a preview for you to enjoy in the first few days of the announcement.

[/]
Letting your voice be heard:
As always, feel free to discuss you'd like to see/any issues through the forums, there are several great community members there who are willing to help. Additionally, we've just started a Discord server[discord.gg], for those who interested in real-time discussions for the game:https://discord.gg/qN9J5f4Thank you and have a wonderful month ahead!

Making the game accessible to people on different platforms has always been a key goal with this project. We are looking to get this right, and so invite players with Mac/Linux computers to try out the game on a different platform.

NOTE: If you're looking to buy the game for Mac/Linux specifically, then you might prefer to wait a week, while testing is underway.

Be warned, this functionality is quite alpha. So alpha in fact that it needs to be accessed on the alpha branch!
To access the branch please navigate to:
Steam Client->Right Click Aura of Worlds->Properties->Betas tab->Select Alpha from the Dropdown list.

Please report all issues in the Issues and any complications to this forum:
https://steamcommunity.com/app/841600/discussions/1/

"What's in it for me for reporting on the Mac/Linux builds early?"
Is it stable?
The builds have been tested by at least two people on each platform to be working. As such we consider it to be stable enough to provide to the public.

A huge thanks to:

For providing intensive testing and diagnostics.

We would like to thank you to, the players who keep this project alive!

This past couple of months, we've been doing significant engine enhancements with a port to Direct X.

We hope to support more lower-end computers and port to new platforms. The latest versions use only half the memory of the predecessor.

Since 2013, we had been using SFML libraries to connect to OpenGL and Open Audio. The new port to MonoGame is what directly supports Direct X (both are available in the launch options).

We anticipate having Ports for Mac and Linux ready for you very soon.

We’ve been working on multiple enhancements and new features for you, over the past couple of months: 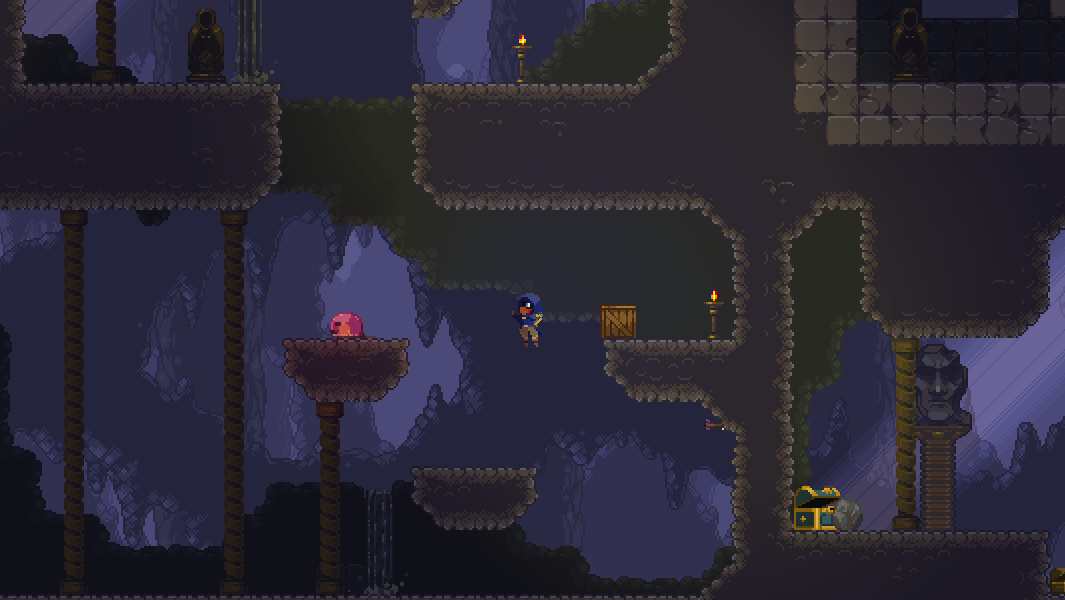 More updates/patches in February
See next announcement for full details.

Bushfire Appeal
The recent Australian bushfires have caused devastation to homes, wildlife, property, and human lives. This has been on a scale unprecedented since the 1970s.
As Australians, it grieves us to see the disaster hurt those around us.

In response to this, we will be donating all proceeds from sales to the bushfire relief:
from the 1st of January to the 5th 7th of February.
This includes the following charities:

To be transparent about what this means:
Thank you!

The changes are as follows:

The game is currently on sale for the festive season!

NOTE: These changes are the start of a larger update set which we look forward to rolling out to you soon! 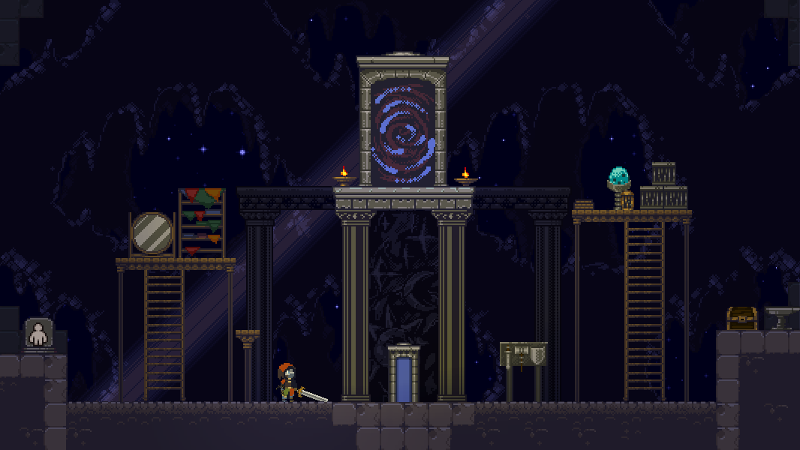 This starter world comes with portals to the various areas and crafting stations for:

This allows for much fewer menus, between you and the perils beyond!
Additionally, it provides you with unlimited ammo and mana to test your abilities before you jump into the fray.

Engine Overhaul:
We've been rewriting of over 300 code files in preparation for porting to other operating other than Windows. These changes also bring optimizations to allow the game to run better on low-end computers.


Halloween event (31st October, till the 6th of November)
Joining in the festivities for a week:

Personal note
Sorry that this update set has taken longer than our usual cycle;
we encountered some financial challenges with some of the changes to Steam on the 12th of September.
We're back on track now, and shall continue providing more updates for this amazing community!

Shaun played a bit of Aura of Worlds at PAX Australia last year and found it rather promising, calling it a neat randomly generated side-scroller with a focus on improvised weapons. After a stay in early access on Itch, Aura of Worlds will enter Steam Early Access on Tuesday, April 24, developer Cognitive Forge announced today.

Cognitive Forge says they've made significant additions since Aura of Worlds' Itch debut. The Steam Early Access build sports three types of procedurally generated worlds made from eight environmental themes, as well as 70 different enemies. One of the most interesting features is the ability to grab and use virtually anything, if only as a heavy object to club enemies with.

You've got grappling hooks, most importantly, but also cloaking items, hackable turrets, portable light bridges, and seemingly everything-proof shields. And it sounds like even basic items have multiple uses. Cognitive Forge offers this example: "You can grab that lantern from the ceiling and carry it around to use as a portable light source or improvised flaming molotov."

Aura of Worlds is $10 on Itch, but its price will jump to $15 when it hits Steam. The price will gradually rise as new content is released.