A huge thank you to everyone that checked out the Update 26 Experimental Branch and provided feedback, suggestions and bug reports. There is a lot packed into Update 26 :: Traveler and now it's on to the final round of testing and feedback on the Test Build branch. Be sure to check out the Test Build branch if you want to help test and provide feedback on new mechanics.

About Test Build Branch
The optional Test Build branch is for testing the latest features before they go live to everyone. As it is a testing version there can be more bugs/issues than in the normal version. If using the Test Build branch, please report any issues you encounter or any feedback on new game play mechanics. Your feedback and/or reports will help to ensure the final version is the best it can be.

There are a lot of changes and additions coming in Update 26 and some of these changes are ready for feedback/testing on the Experimental Branch on Steam!

Hope you all are staying safe out there. I’m hunkered down inside working on update 26. I had hoped to shift it over to the experimental branch by now, but there is a bit to do yet. Here are some of the things being worked on. 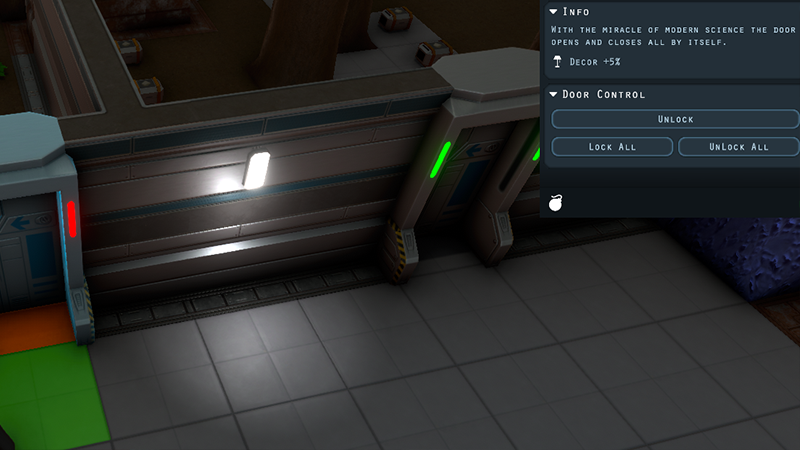 A minor change to doors will allow them to be locked and unlocked. This will allow you to keep colonists from exploring or lock them in a room to see what happens. 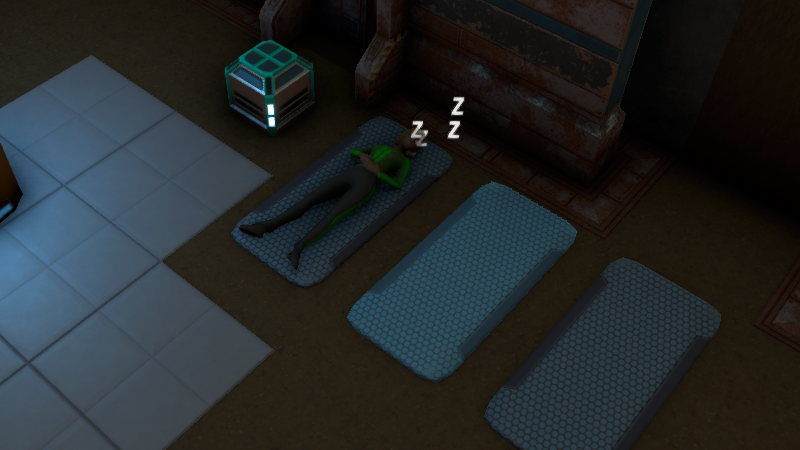 Sleeping bags or a sleep spots have been highly requested and I couldn’t agree more. Sleeping mats don’t require any research and allow your colonists to sleep on something slightly better than dirt before you’re able to construct bedrooms.

Points Of Interest
As mentioned in the previous developer log, POI locations on the surface map are getting a big overhaul. A lot more POI types are being added to help provide more variety as well as more specific rewards. 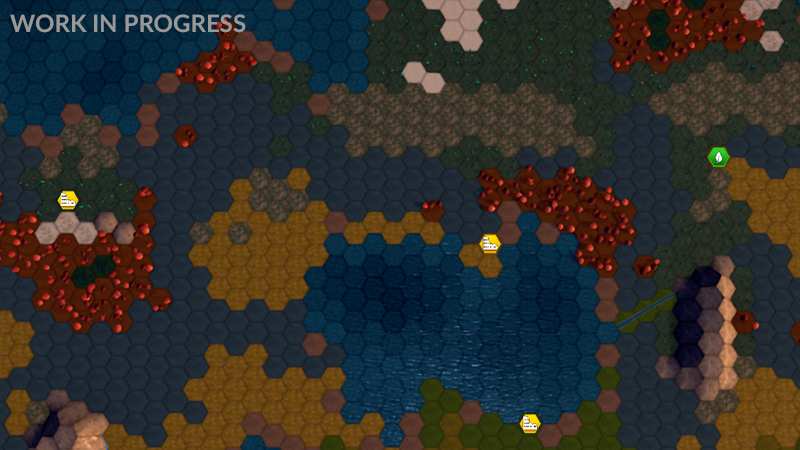 Additional POI location icons are being added as well. The above image shows some of the new icons in progress, but does not accurately depict POI density as not all of the new POIs have been added yet.

Surface Mining
New surface mining mechanics are still under development and coming along nicely. The new system, as covered in the previous developer log, will generate mining locations on the map. This means no more infinite mining on any tile. The new mining sites will be finite deposits that have different depths: Surface, Sub-Surface and Deep.

Expedition parties will now have the ability mine, but can only mine resources at surface depth.

Mining vehicles will be able to mine up to sub-surface depth and in order to mine deep deposits a mining platform will have to be constructed.

Surface mining will also see some automation mechanics added. The mine action now requires that a target mining site be selected. After selection a mining vehicle or expedition party will mine the resource and take resources back to the closest resource depot. They will continue to do this until they’ve gathered all the resources they can. 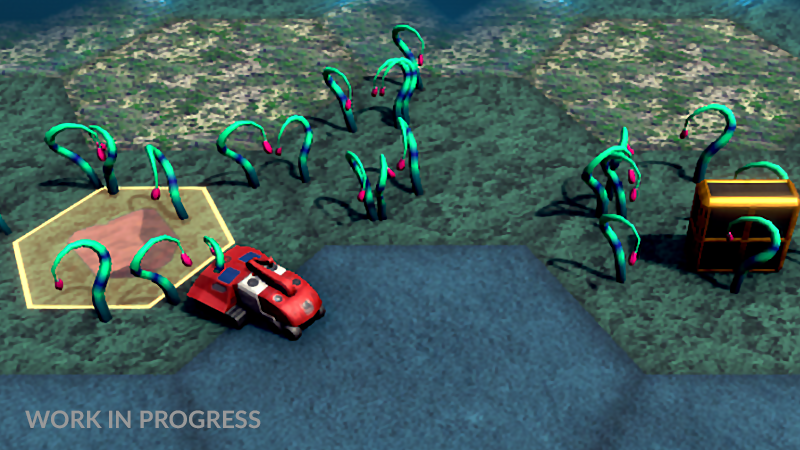 The resource depot shown above (artwork not final) is a new surface construction that miners or resource transports can use to drop off and pickup materials. The resource depot acts as an extension to the shipping/receiving inventories available in the facility.

There are still a lot of loose ends I need to tie up before I can push Update 26 to the experimental branch for feedback. I’ll have more information as development progresses.

Thanks for all of the great feedback on the game. Certainly stop by the Mercury Fallen Discord and leave some feedback/suggestions.

Thanks for the great feedback on Update 25 :: New Horizons. Now that the more critical issues have been patched up, I’ve started work on Update 26. Update 26 will continue to expand and improve upon surface side content.

Surface Resources
Resources are getting an overhaul and you’ll no longer be able to mine anywhere or infinitely. This will make expansion and resource acquisition on the surface more varied and engaging. 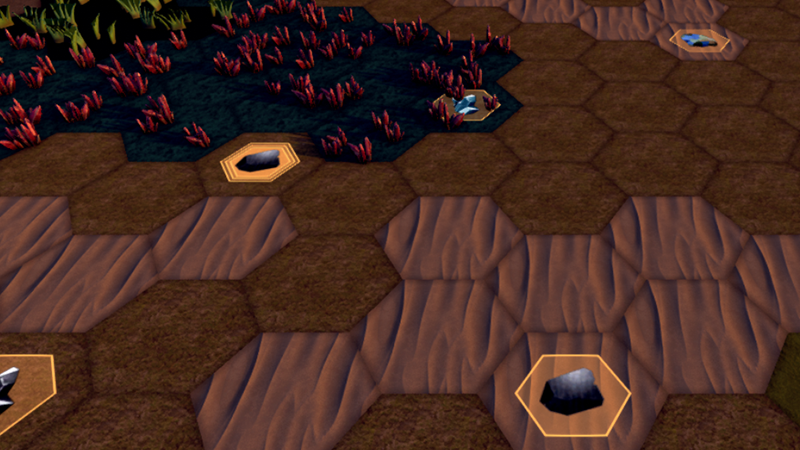 Each surface side resource deposit will come in varying depths. This determines the quantity of a resource and what is required to mine all of it. A resource can be mined by either an expedition team, mining vehicle or mining platform, with each being able to mine deeper.

Deep resources could still be mined by an expedition team, but the expedition team will only be able to acquire resources closer to the surface. A resource deposit could then be mined further by a mining vehicle or mining platform.

How these resources appear on the map and additional scanning mechanics are in development.

Surface Construction
I can’t say too much about it at this stage, but surface construction is in development. This will include new surface side structures and construction mechanics.

Points Of Interest
There are currently far too many POI locations and far too little variety. I had originally planned to just add more POI location types to increase variety.

While this is still something that will happen I’m also re-working how POI locations are generated on the map. POI locations will have a limit to how many times they can appear on the map. This means some repetition will occur, but far less so.

The end result will be less POI locations, but more unique POI stories and rewards.

Colonists
The colonist, understandably, was something that was coded very early on in development. It’s seen a lot of additions to it, but I finally got around to breaking it down and re-working colonist data. The rework focused on splitting the visual elements of a colonist from the underlying data that represents a colonist.

What this means is the ability to better handle colonist data without having them visible in the facility. Starting colonists can now have their data generated before leaving a stasis capsule. 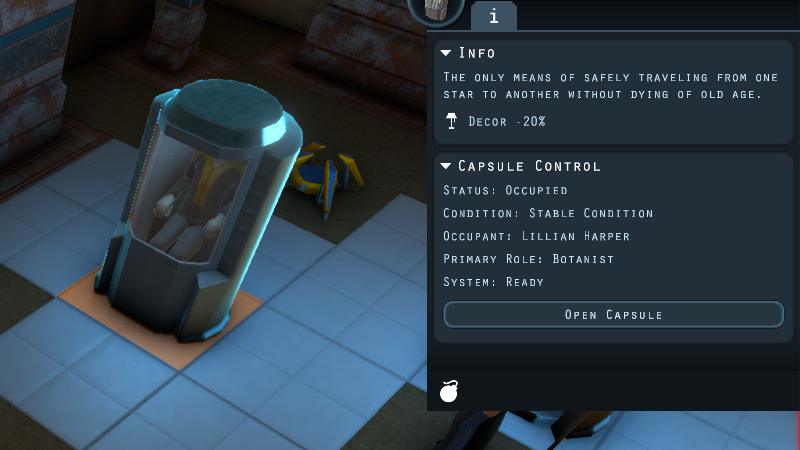 Starting colonists will now have a predefined job role with proper attributes. While these colonists can still be assigned other job roles they will at least start out being good at something.

In a future update this will allow me to provide control over starting colonists in the new game interface.


There are a lot of things being worked on for Update 26 and I’m really excited about all the changes and additions. I’m actively working to get Update 26 ready for the experimental branch and hope to have something ready next week.

Thanks again for all the great feedback and if you haven’t had a chance to check out the Feedback Survey, now is a great time.

Thanks for all the great feedback and reports. Patch Update 25.4 is a small, but important, update to address some critical issues that have been reported. 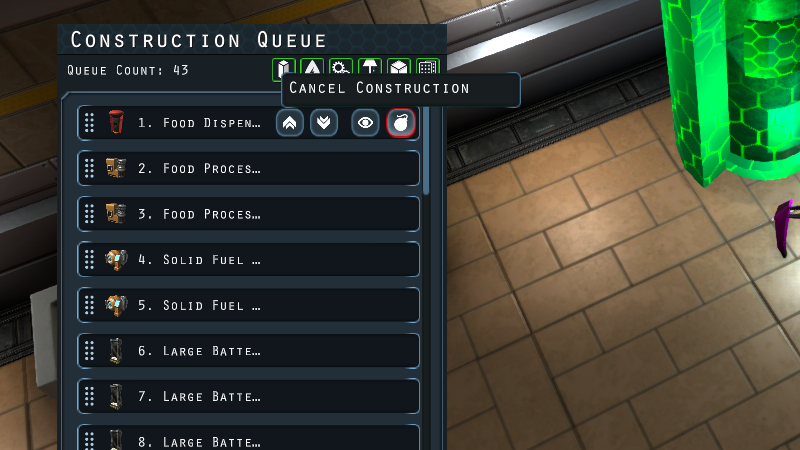 While this update focuses primarily on bug fixes, I did sneak in a minor addition to the Construction Queue. Line items now only show management buttons for the item the mouse is hovered over. There is also a new cancel construction button that allows you to quickly remove items from the construction queue.

Feedback Survey
If you haven't already checked it out and have a few minutes to spare, be sure to take the Update 25 Feedback Survey. Let me know what you like and what you don't.

There has been a whole lot of new Mercury Fallen players and a lot of great feedback. Thank you to everyone, as always, for the amazing feedback on the game. Knowing what you like, what you don’t and where you get stuck helps to improve the game in various ways.

Patch Update 25.3 provides improvements to the UI, various tweaks and some bug fixes. See the release notes below for the full list of changes.

Thank you for the great feedback on the New Horizons Update. Work has already started on the next content update, but before focusing entirely on that I wanted to get some smaller tweaks and fixes done. 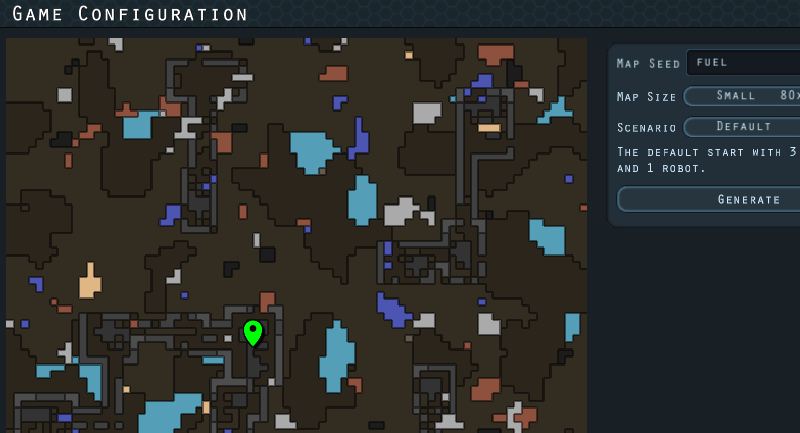 Patch Update 25.2 fixes up a couple of reported issues and also includes a starting location marker when starting a new game.

Keep that feedback coming and let me know what you like, what you don't and where you're stuck.

Thanks for all the great feedback on Update 25 :: New Horizons. Before starting on the next content update, I'm working on some smaller tweaks and fixes. Update 25.1 includes some of these changes/fixes. 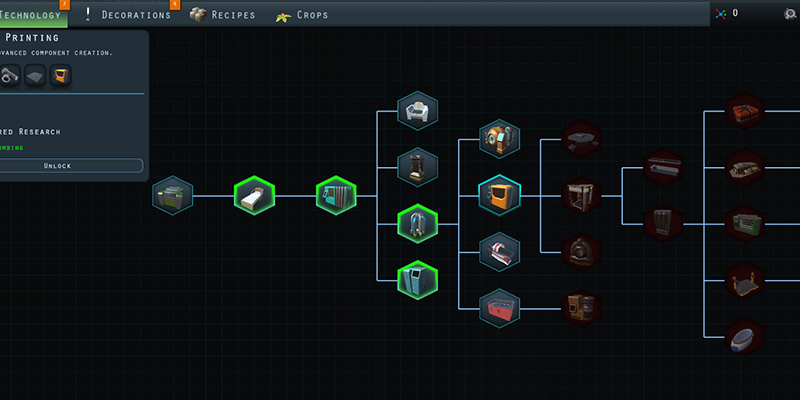 The tech tree has been re-worked completely to provide a clearer path of progression. To accommodate some of these changes, I’ve also made changes to the early game progression.

The elevator no longer provides power and is constructed later in the game. The new E.M.G., or Emergency Mechanical Generator, has been added to provide early game power.

The water trap no longer requires bait, but will use bait if it’s available. Bait will increase the operation speed. A new cave-dwelling fish can now be captured in the water trap.

Expeditions were meant to be a means of exploring the surface, making new discoveries and gathering resources for the facility. While this did happen, I received a lot of feedback that it required more micromanagement than it really needed.

With this update, expeditions are far easier to manage. Now, to create an expedition, you select destinations along with supplies and passengers. Once the expedition team has been selected they will automatically travel to each POI, and then head back to dock at the facility. The POI interaction screen will appear when they arrive at a destination. 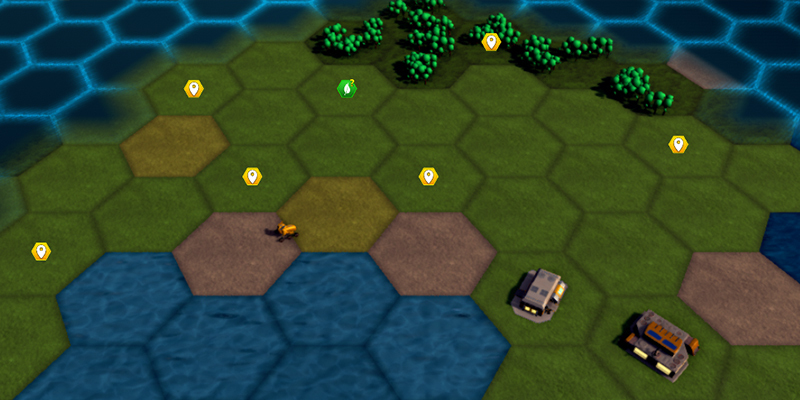 Points Of Interest on the surface map are no longer generated via the Comm Station. Instead, they will appear automatically as the surface area is revealed.

New points of interest have been added and some existing POI interactions have been updated. Additional POIs will continue to be added in future updates.

The Comm Station can no longer be researched or used, but will return with a new use in a future update. 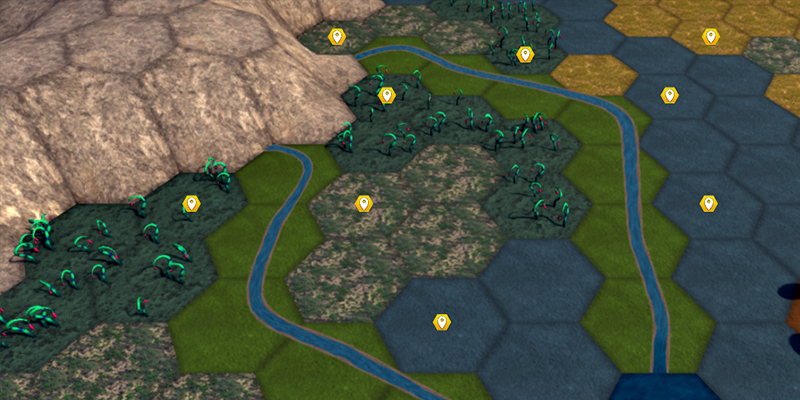 Rivers have been visually updated to be more, well, river-like. Water colors have also been updated. 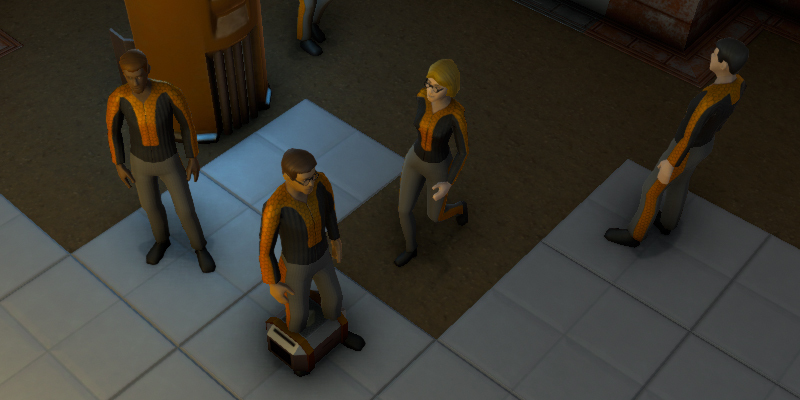 Colonists now have a chance to spawn with random accessory items such as glasses or facial hair. 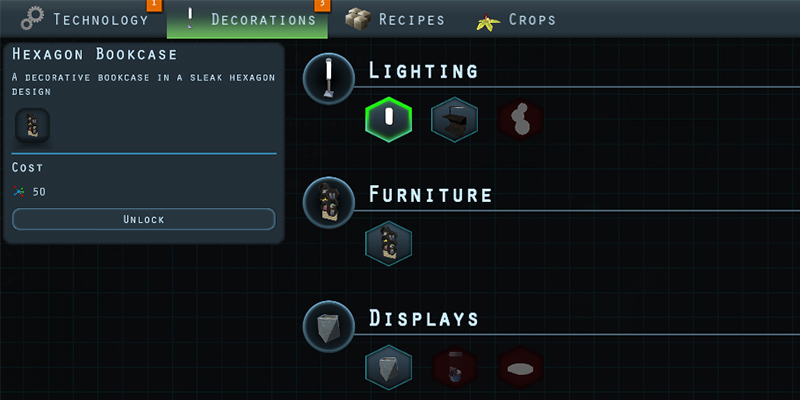 A new decorations section has been added to the research screen. Here, you can unlock new and existing decoration items. This will form the foundation of more content to come. 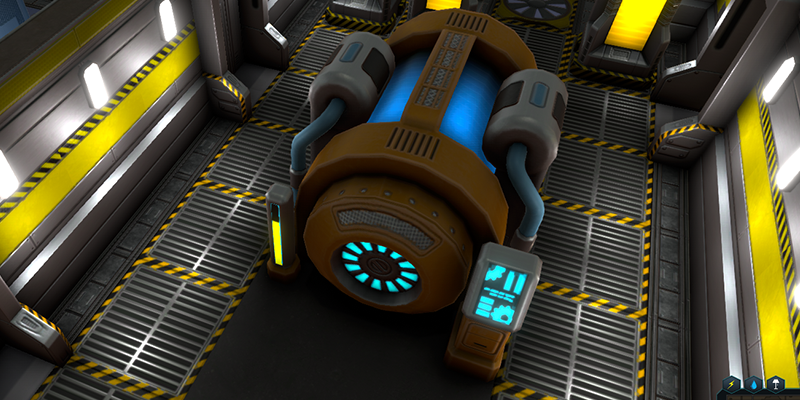 I had more planned for Update 25 that didn’t make it in. The next content update will continue the improvements and additions to planet surface content.

Check out the release notes below for the full list of changes, fixes and additions.