Ronin Mode Basics
In this mode, you do not pick a job. In fact, the job system is effectively removed!

Instead, when you start the game, you are assigned 12 random active abilities and 6 random passive abilities, all of which are purchased with JP. These abilities come from an enormous pool of skills and include over 50 NEW, never-before-learnable skills such as effects from Legendary items. We guarantee you will find some interesting combinations!

As you venture through Tangledeep as a Ronin, you'll also find not just more monsters, but also randomly-generated monsters (similar to Wanderer's Journeys in Legend of Shara) fighting alongside the monster ensemble you're used to.

You'll have to use observation, tactics, and ingenuity to learn the abilities & patterns of these new monsters and overcome them. Not to mention... they can be captured as pets!

If your character is defeated, you'll retain your "meta" progress like in Heroic Mode, but you will have to roll a new character with new skills. That's just how it is!

Other Ronin Mode Changes
There are a variety of other tweaks in Ronin Mode to generally streamline the game and encourage that "one more run" style of gameplay we all know and love.


Overall, we hope that you'll find Ronin Mode a blast to play, even if you've beaten the game 10 times over. There's a lot of new possibilities and exciting encounters to discover. Good luck!

IMPORTANT NOTE: Ronin Mode is currently available in English only, but we are localizing it as fast as possible!

Bug Fixes
Of course, Patch 1.4 also brings with it a collection of bug fixes from months of player feedback.


Of course, there are other issues we're continuing to evaluate and fix, but we had to put a bow on this patch sometime.

If you encounter any problems, need help with the game, or want to talk strategy feel free to join our friendly Discord[discord.gg] and report them. We'll see you there.

Tangledeep
264
22
Patch 1.4 beta
Mar 16
Looots of bug fixes here, plus RONIN MODE (English only) - full notes will come after this is tested!

Tangledeep
47
2
December Update 1.36 is Live!
Dec 3, 2020
Hello adventurers! Today's patch makes pet ownership in the world of Tangledeep easier and more fun by allowing pets to self-heal outside of combat, gain XP more easily, and inherit more abilities (among other things.) There's also a smattering of bug fixes to keep the game smooth and stable. Enjoy!

We've also implemented a popular user request, the ability to "reroll" relics found in Wanderer's Journeys once you've unlocked Horatio in town. You will need both Legend of Shara and Dawn of Dragons to access this feature, but hopefully it should help give you more chances for great, useful relics!

We're pleased to announce the launch of Patch 1.34, which essentially imports all the control improvements we made for the Switch version back to PC (among others things.) And speaking of the Switch version, that has been updated within the last few days as well, and is now at parity with PC.

In a nutshell, with patch 1.34, it should be easier than ever to enjoy Tangledeep with a controller. The targeting UI has been clarified, analog movement improved, and the ring (radial) menu has been added. We've also made a number of other quality-of-life improvements, which we'll detail in the patch notes below.

Before that though, we invite you to check out our next project, which is now live on Kickstarter. 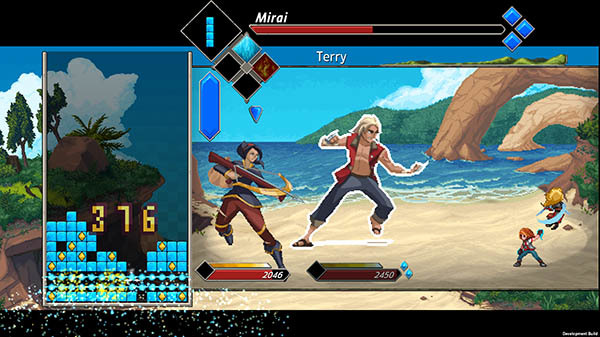 As the name suggests, this is a spinoff of Tangledeep that takes place in the same universe, with some familiar faces, but also many brand new characters, a new story, new items, and completely different gameplay.

To find out more and play our pre-alpha builds check out the Kickstarter page. We hope you'll like what you see!

Now then, on to the patch notes!

Tangledeep
132
10
Patch 1.33 Launches with the Summer Sale!
Jun 25, 2020
Hello adventurers! Today marks the start of the Steam Summer Sale and some of our biggest discounts ever for Tangledeep, its DLC, and soundtracks. We're also launching Patch 1.33 with some fantastic new content for players of all levels!

New Two-Handed Weapons
We're greatly expanding the build diversity and weapon selection for two-handed fighters by adding three new 2H weapons in every weapon category! This means you can now find two-handed Axes, Maces, Spears, Staves, Claws, Daggers, and Whips* (if you own Dawn of Dragons). These should provide lots of new opportunities to experiment with your melee characters and make use of masteries beyond the Sword.

Oh, and two-handed Staves also get a big ol' Spirit Power boost in addition to the innate level-based bonus, so even casters have something to play with here.

A huge thanks to player Entitas who provided the foundation for this new content with their excellent 2H weapon expansion mod! Thank you! 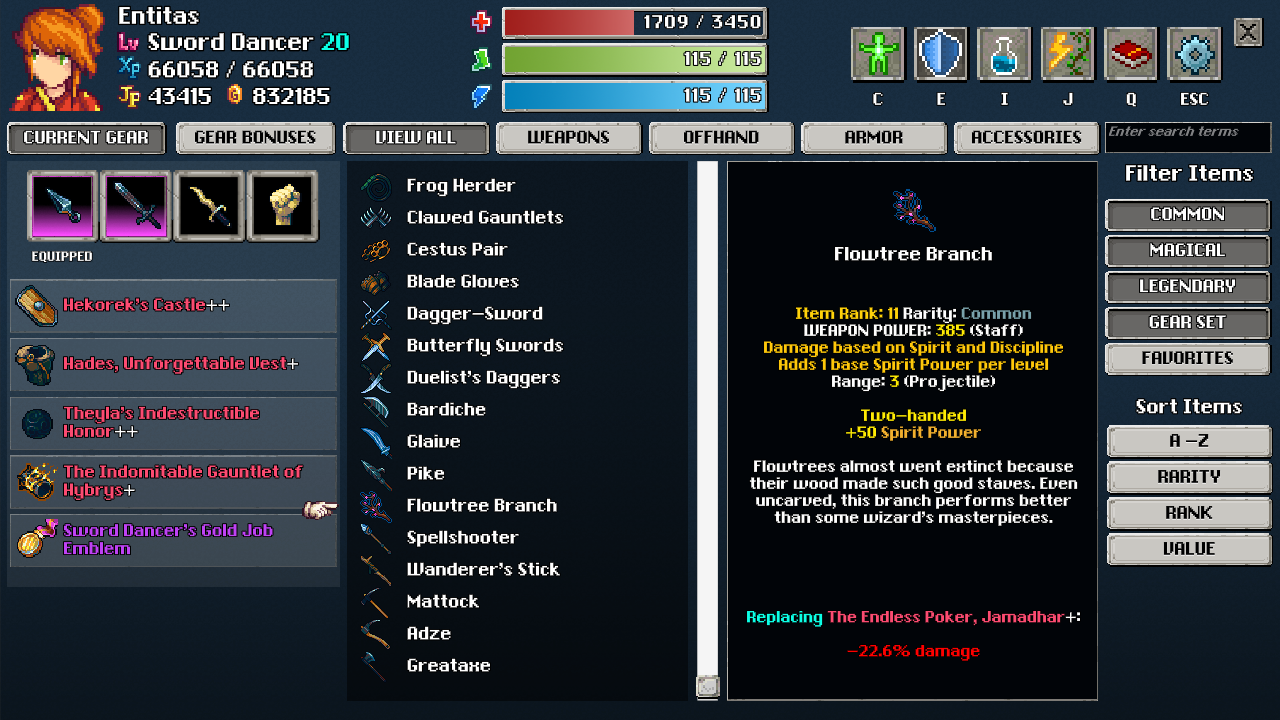 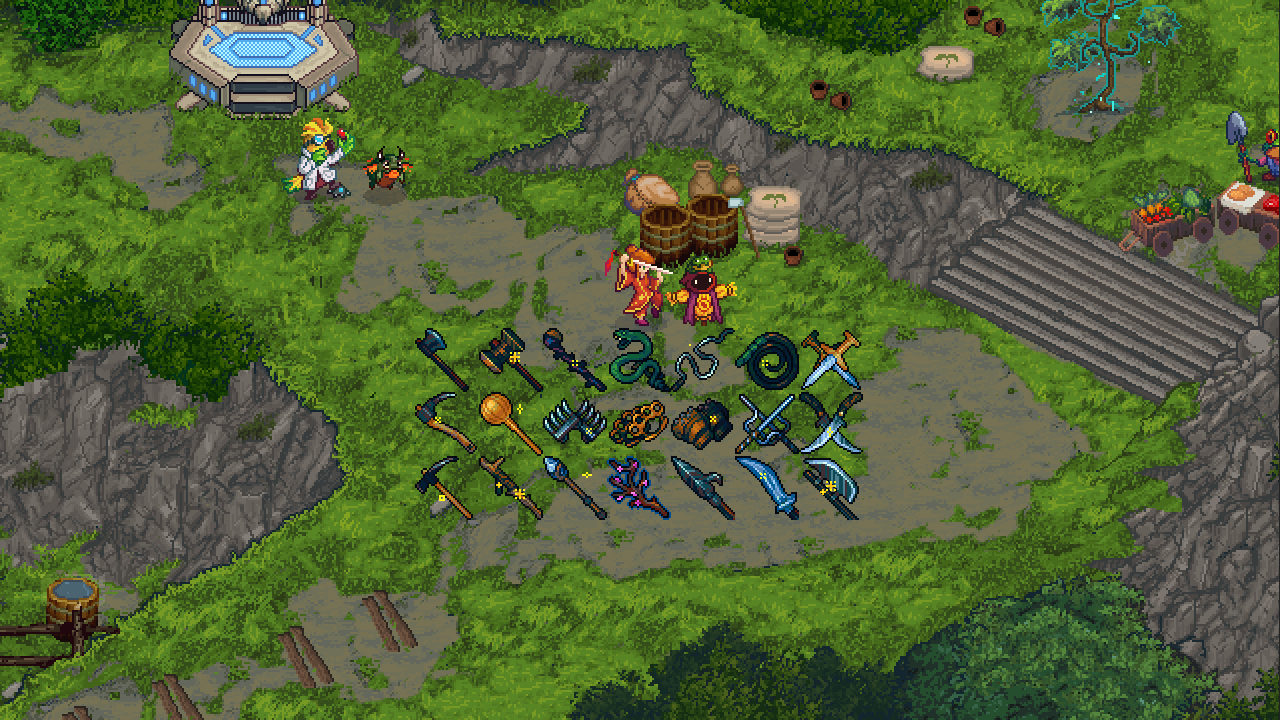 14th Job - the Sorceress
If you own the Legend of Shara DLC - and if you don't, now is your chance to get it cheaper than ever - we've got a treat for you: a new playable job!

The Sorceress is based on Shara, but reworked and adjusted for Mirai's game mode. She can make use of powerful Void and Phasma abilities, even though she lacks Shara's domination and shield powers, and has some new innate talents to encourage tactical gameplay.

As for her Job Emblem, much like how Shara draws power from all the other jobs in the game, your Sorceress emblem allows you to pick 1 power from any four randomly chosen from other job emblems for each tier you obtain. This should create some interesting and wild emblem ability combinations... provided you can survive the Job Trials! 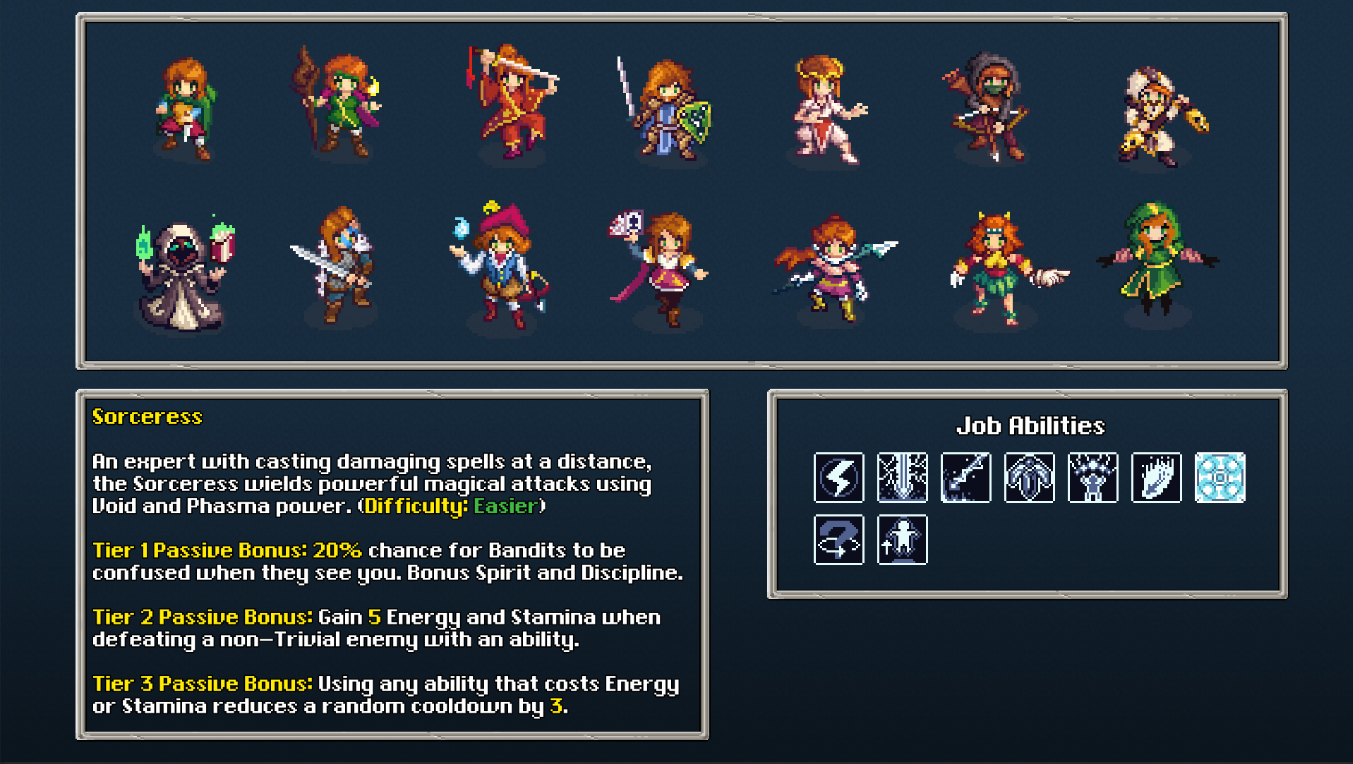 Check out Dungeonmans
Dungeonmans is another action-packed, tactical roguelike that served as a major inspiration for Tangledeep's gameplay. It has continued to get updates since its original release in 2014 (!!!) and is on sale for more than ever now. The creator Jim Shepard also worked on Tangledeep, so if you like our game, check out his!

Switch Update Progress
The Switch update including this content (plus various other fixes and tweaks from the PC version) is in the pipeline for Nintendo and should be arriving within the next 30 days. We don't have control over the approval process but we also don't anticipate any major problems or delays. So Switch owners, stay tuned!

Puzzle Explorers: A Tangledeep Story, Coming to Kickstarter Soon
Our next project is a hybrid of JRPG and falling block puzzle gameplay set as a spinoff in the Tangledeep world. It features some characters you already know, and many more new ones, with a totally different gameplay style and super gorgeous pixel art.

We're launching a Kickstarter for this game soon, and if you like what you hear & see, please consider supporting the game there. To stay posted on our progress, and be notified when the campaign launches, please join the Impact Gameworks mailing list[eepurl.com]! 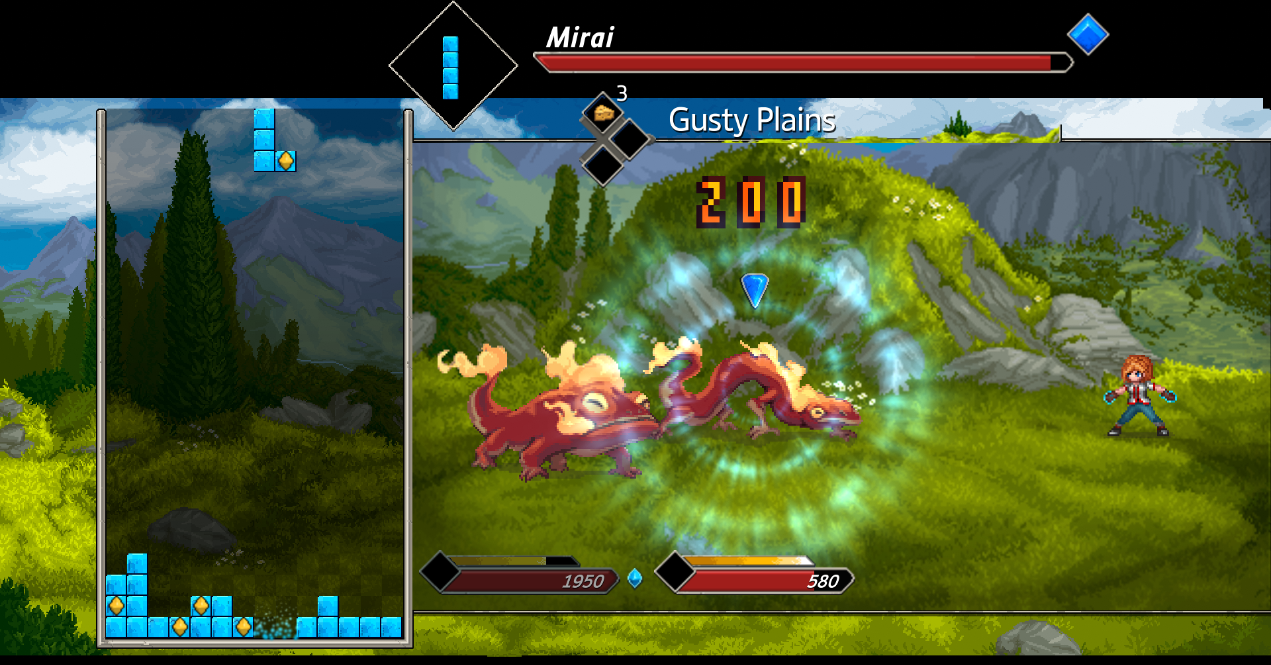 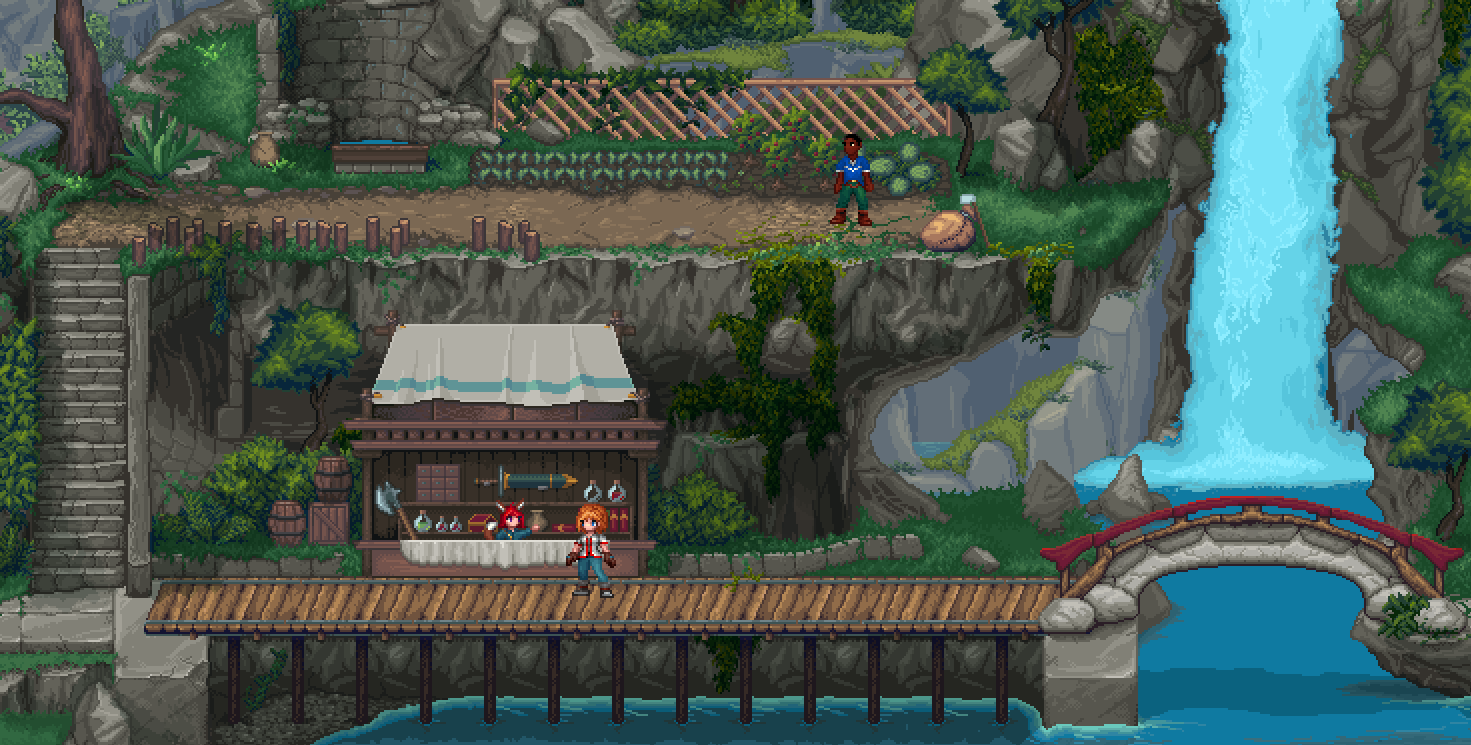 Tangledeep
103
9
Tangledeep for Nintendo Switch Gets Massive Free Update + DLC!
Mar 26, 2020
Version 1.1.0 of Tangledeep for Nintendo Switch includes all PC updates since July 2019, along with the entirety of Legend of Shara completely free! This massive update will give Switch players not only a smoother, better-balanced experience with countless fixes and improvements, but dozens of hours of new content and adventures to enjoy.

We decided to make Legend of Shara free on Switch because the Switch version of Tangledeep has a list price of $20 - more than PC - and it has been slower to receive updates, due to the nature of patching a console game. So, this is our way of saying "thank you" to Switch players for their patience and for their support of our game.

Also, if you are in North America or Japan, you can grab the Switch version[www.nintendo.com] for 50% off for the next week! The sale in Europe will begin on 3/30.

Thank you for playing Tangledeep!

Tangledeep
55
1
Now Available: Tangledeep: Dawn of Dragons
Nov 25, 2019
Enter the Dawn of Dragons!
Hello adventurers! Our second expansion DLC is now available on Steam! We also have a new "Tangledeep Complete" bundle that will allow you to get ALL DLC at a discount (or just the stuff you're missing!)

About the Expansion
Dawn of Dragons is centered around a group of diabolical super-boss monsters, and their respective dungeons, which can be unlocked at level 12. The quest line will start in Riverstone Grove. These dungeons each have unique themes, gameplay mechanics, and monsters, with incredibly tough boss fights at the end. Defeating these bosses will earn you new "Dragon Soul" abilities, plus ultimate bragging rights!

While these new areas and foes are geared toward advanced players, the expansion also features new content throughout the existing game - like new monsters, weapon types (like Whips and Hand Wraps), new consumable items, item crafting, and dozens of new magic mods that can create totally new builds.

We can't wait for you to check it out!

Key Features
1.30 Patch Notes
Besides enabling all Dawn of Dragons content for owners of the DLC, there are some other changes and improvements:

BALANCE
Rebalanced/fixed how Confusion status works. Now, Confused monsters have a 50% chance to take a Confused action on their turn. This action is either: attack a random target (including possibly allies, or themselves), OR wander to a random nearby space. Overall, this should be way more useful than Confusion was previously.
Fixed a certain harmless frog exploit. You know what it is.

BUGS
Fixed bug where the searchbar tutorial could sometimes mess with dialog box state.
Fixed rare game crash bug
Fixed issue where Bandages and Iron Breathing would trigger healing regardless of clearing any bleed/poison effects
Fixed bug where getting a campfire before a boss or special map would sometimes spawn you in a weird location

QUALITY OF LIFE
When talking to Jorito about Weapon Masteries, he will tell you how much JP you currently have.
The game now saves your combat log in your save file folder (combatlog0, 1, etc. corresponding with save game slot.) This log mirrors the content of the log in the journal UI tab.

Tangledeep
101
9
Patch 1.29 Has Arrived!
Oct 28, 2019
Hello adventurers! Today's update covers a range of bug fixes and changes that should make the game experience better for everyone.

First, we have some buffs for the Budoka job that should affect its lategame potential. Right now, bare fists are very strong in the early and mid-game, but fall off compared to high-rank legendary and relic weapons later on.

So, we've increased fist/kick scaling for Budoka at levels 12, 16, and 20 (the latter two levels available to Legend of Shara owners) and also increased their chance to strike vital points once their Mastery passive has been unlocked.

Otherwise, we have an impressive slew of bug fixes and game optimizations that should smooth out some rough edges that have cropped up. Optimizations include faster load times and less CPU spikes in heavy combat situations. Naturally, we will be bringing this to Nintendo Switch as well.

Tangledeep
71
2
Patch 1.28 is Available Now!
Sep 16, 2019
Hello adventurers! Today's update has a nice variety of fixes, balance tweaks, and improvements sure to please players of all experience levels. For those of you who own the Legend of Shara DLC, we have a specific set of changes for you as well!

Speaking of, we continue to work on Legend of Shara for Switch. Still no exact timeline, as our testing resources are very limited, but the majority of code is now ported over and there are no major hiccups yet. Hooray!