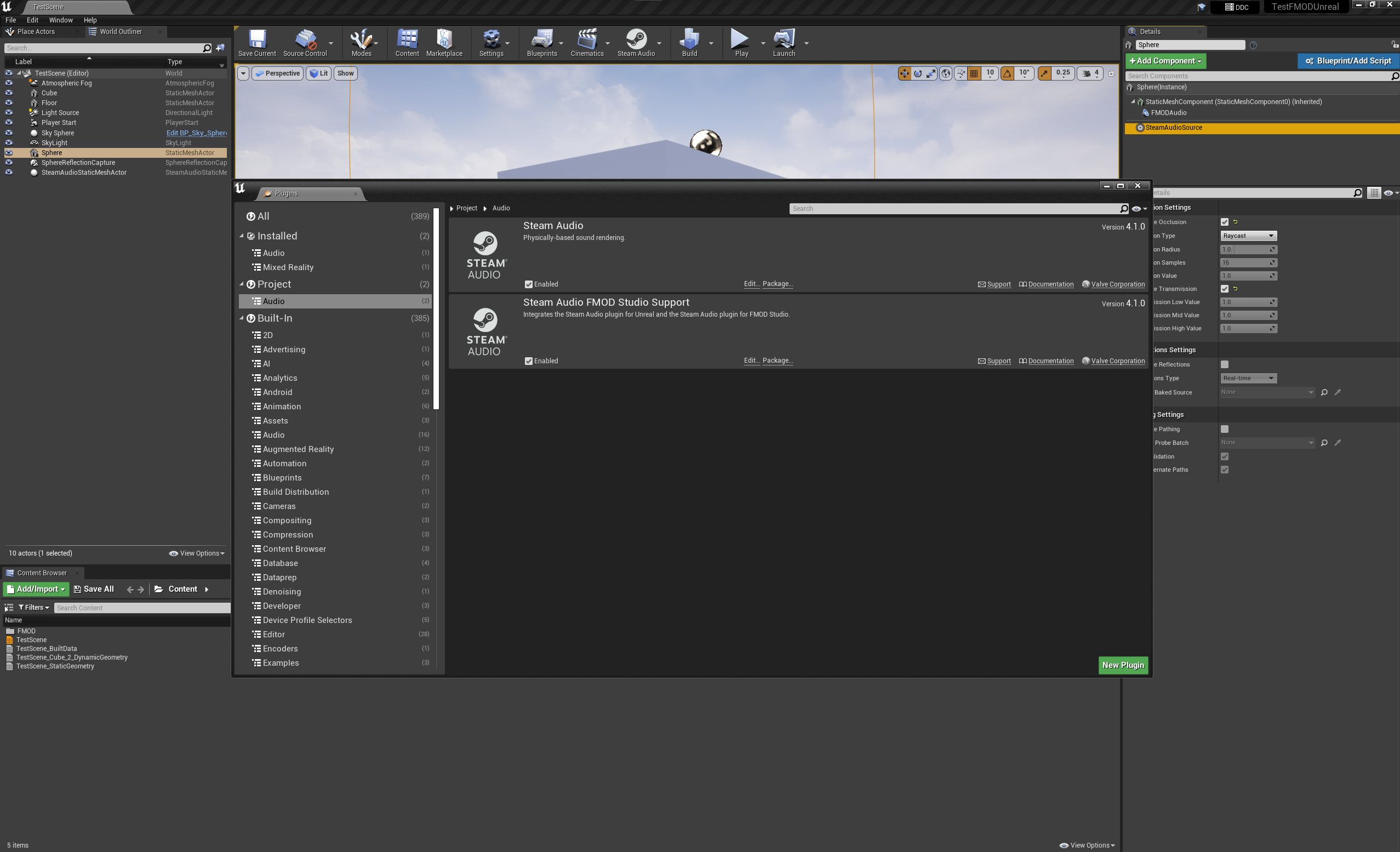 The major new features of the Unreal Engine plugin in this release include:

Sublevel support (including streaming sublevels)
Geometry can be tagged in any sublevel referenced by a level. Whether the sublevels are loaded automatically along with the main level, or streamed in based on a level streaming volume or any custom logic, Steam Audio will update occlusion, reflections, and reverb automatically.

Baked data exported to .uassets
Level geometry (both static and dynamic) as well as baked sound propagation data is now stored in .uasset files that are referenced by Steam Audio components. This simplifies the packaging workflow for your projects.

Latest Steam Audio SDK features
In addition to the above, this release of the Steam Audio Unreal Engine plugin includes all the latest features of the core Steam Audio SDK, such as pathing, hybrid reverb, and more.

Steam Audio
24
2
[Unity] Steam Audio Android support
Hi all, I'm working with the Android VR headset Oculus/Meta Quest 2 and currently I can only get different HRTFs and occlusion to work (i.e. no reflections). I found some old threads stating these are the only features supported on Android. These limitations are not stated anywhere official as far as I know. Is this still the case?...
3

fresi
Nov 17 @ 7:51am
General Discussions
Steam Audio 4.0.0 Release
Jul 22, 2021
We've just released Steam Audio 4.0.0[github.com], which is a major update to Steam Audio. This release includes new features and an updated API that is more flexible than previous releases. Because this is a major update, the version numbering we used so far was no longer sufficient: we have updated from 2.0-beta.20 (the previous release) to 4.0.0 (the next available integer).

This release includes features that were developed or significantly enhanced during the development of Half-Life: Alyx. 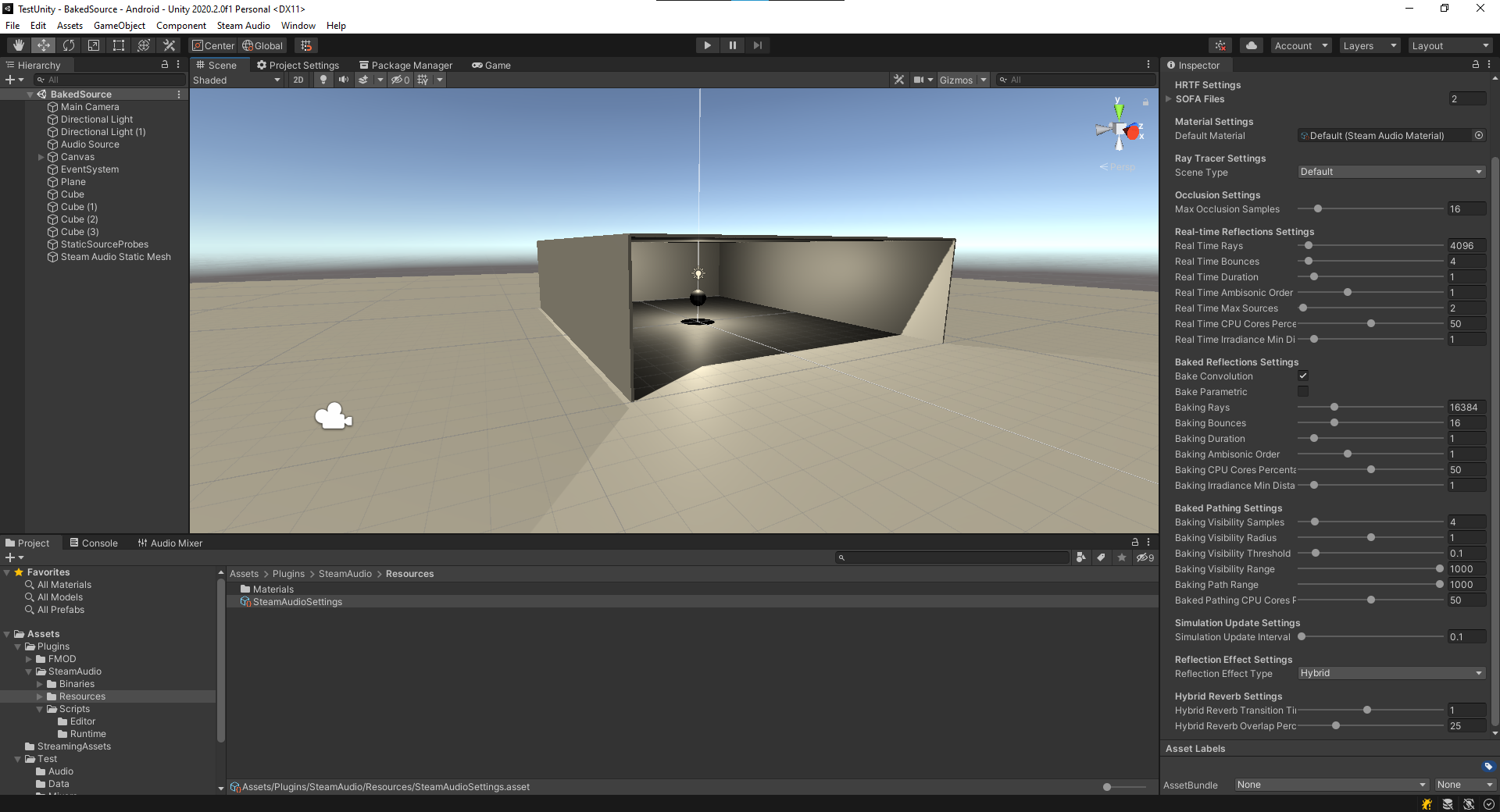 The major new features in this release include:

Pathing
Pathing is a new way of baking sound propagation from a moving source to a moving listener. This involves placing probes in the scene, and calculating shortest paths between each pair of probes. At run-time, this baked data is used to calculate how sound propagates from the moving source to the moving listener, and spatialize the sound accordingly. If a baked shortest path is occluded by dynamic geometry (like a door), Steam Audio can recalculate alternate shortest paths on the fly. Steam Audio also applies a diffraction model to paths that bend around corners or through doorways, etc. This feature is useful for modeling how sound emitted by an occluded source reaches the player through doors or windows instead of directly through walls.

Hybrid Reverb
When rendering reflections or reverb, Steam Audio can use convolution reverb (which is defined in terms of an impulse response) or parametric reverb (which is defined in terms of a small set of parameters, like decay time). Convolution reverb results in more accurate reproduction of early reflections and directionality, but requires more CPU. Parametric reverb requires less CPU, but cannot reproduce early reflections as accurately, especially in outdoor spaces. Hybrid reverb is a hybrid of the two: the early reflections are rendered using an impulse response, and the later reverb tail is rendered using parametric reverb. The transition between the two types of reverb is smooth and controllable, as is the length of the reverb tail. This feature is useful for trading off reverb quality and performance.

Unity Plugin: Additive Scenes
The Unity plugin now has full support for additive scenes. Multiple scenes can be opened additively in the editor, and exported separately. Scenes can be additively loaded and unloaded freely at run-time, and Steam Audio will automatically update occlusion, reflections, and pathing simulation to account for the changes.

C API Redesign
The Steam Audio C API has been significantly redesigned, with the goal of increasing the flexibility available to developers and sound designers. Developers can control when and how often simulations are run, and can perform arbitrary post-processing before using the simulation results for rendering. For example, after simulating reverb, the length of the reverb tail can be increased or decreased based on the game state. Simulation results can also be used outside of spatial audio rendering: for example, the results of pathing simulation can be used to drive enemy AI.

Due to the major changes in the API and plugin design, this release is not backwards-compatible with previous releases. In-place upgrades are not recommended for existing projects, except those in the earliest stages of development.

This release includes updates to the Unity plugin, FMOD Studio plugin, and C API. An update to the Unreal plugin will be released separately.

This functionality will be available in the Unreal Engine from version 4.25.

In particular, Steam Audio handles rigid-body motion of objects, which means an actor with a Static Mesh component can move, rotate, or be scaled, and Steam Audio will update the acoustics appropriately. Deformable or breakable Static Meshes are not supported.

To use this functionality in Unreal, first enable Embree as described in the documentation. Next, attach a Phonon Geometry component to a Static Mesh Component of any Actor in your level that should be treated as dynamic geometry, such as a door. Configure the Phonon Material properties of the Actor as needed, then click Export to export the geometry data to a file. Now, at run-time, when the Actor moves (either through scripting, physics, or user interaction), Steam Audio will automatically update acoustics to match. 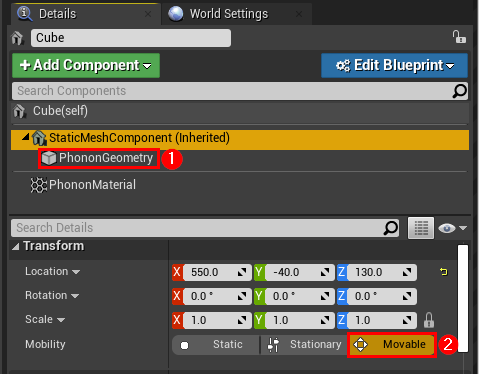 Techead101
Oct 13 @ 10:20am
General Discussions
Creating large, distant SFX
Hi there, I'm trying to create a few larger, distant sounds such as traffic in a cityscape and wind noise. How do I create less pinpoint accuracy and broaden the sound position please? ATM, the directionality is too stark and therefore the sounds feel small......
4

sneakBeats
Aug 29 @ 10:13am
General Discussions
[Unity] Steam Audio Apple Silicon Support
Hi all, Has anyone had any luck with using the Steam Audio package in Unity on an Apple ARM machine? Thanks!
1

anilcamci
Nov 1 @ 11:16pm
General Discussions
[Unity] Strange Sound Occurred When Doing Physical Reverb
Unity Version: 2019.4.40 Steam Audio Plugin Version: 4.1.1 Steam VR Plugin Version: 2.7.3 HMD: HTC Vive I am using unity audio engine. ----- I am using steam audio in my VR environment. I have tried and it worked correctly with no VR player prefab, but when I use the steam VR player prefab and attach the audio listener to it, the reverberation simulation starts to act strange. I will hear some strange electronic sound occurred, which shouldn't appear. If I turn off the reverberation setting, everything se...
1