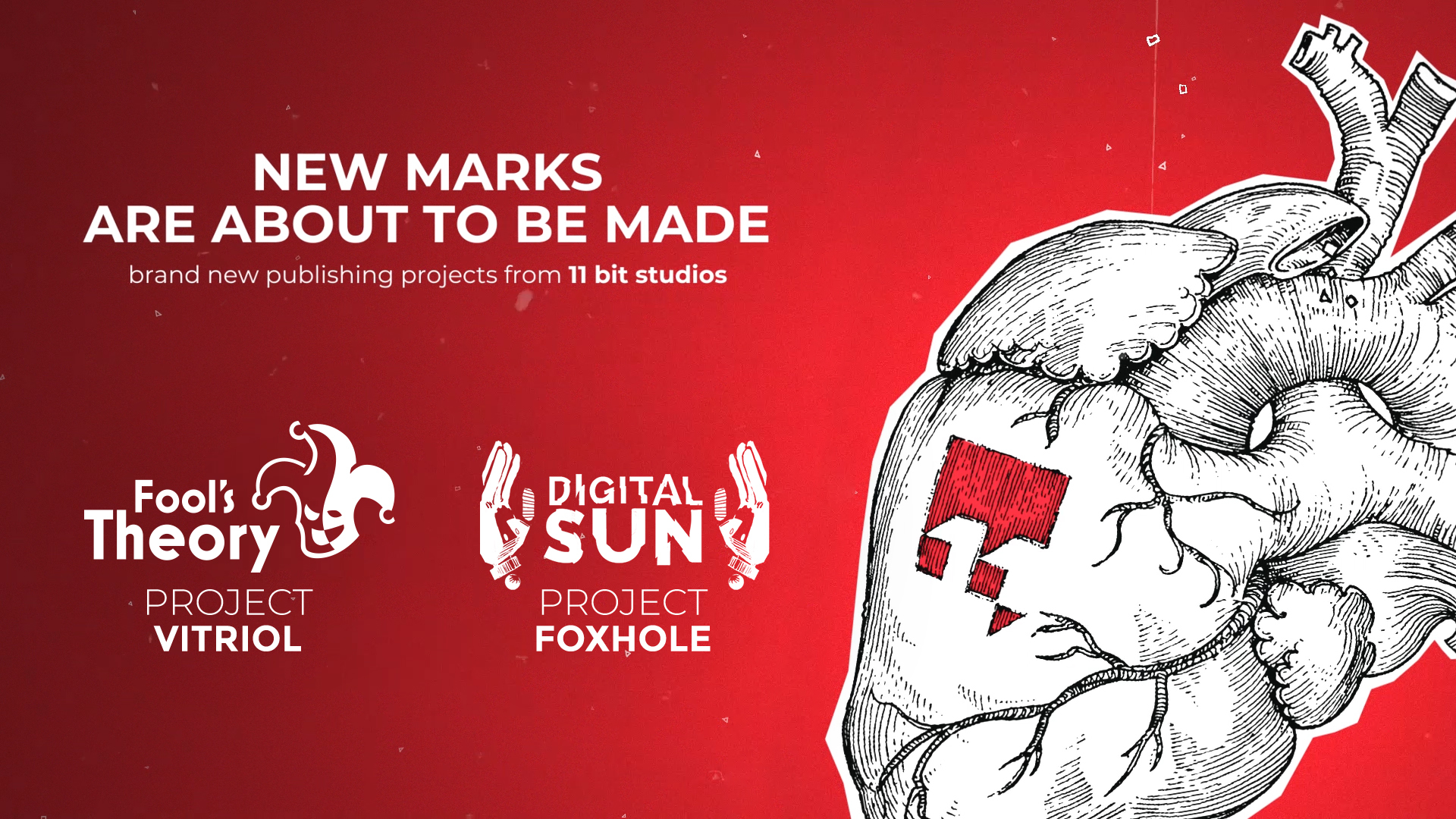 We have some super exciting news for you!
We are proud to team up once again with the developers of Moonlighter and take on an ambitious project from Fool’s Theory! Both projects -- in various stages of development with further details coming in 2020 and beyond -- are bigger in scope than anything 11 bit has previously published.

“We’re still an extremely picky publisher. We’re probably even pickier than we were before if you can believe it! Our job is to hand-pick true gems and put our best efforts in with the development teams to help make them shine. We believe in boosting unique projects and using all the marketing magic we have to see them succeed. Right now, we’ve got two projects we’re really proud to have under our wing,” - Pawel Feldman, Publishing Director at 11 bit studios.

Details are sparse right now (gotta save all that marketing magic for later), but we can reveal the following:
And if you're willing to look for more clues, here's a short but very mysterious video:
https://youtu.be/0xR4XkeOqao
We're very much excited for the things to come. We hope you're sharing this excitement with us now! Stay tuned!

Be sure to follow us on social media to stay up to date with all our news:Have a good one!
11 bit studios + Fool's Theory + Digital Sun Games

We have another update for you!
This time we focused on fixing bugs you’ve been reporting since our last update with multiplayer stability being our main focus. We identified, reproduced and fixed plenty of tricky issues and we hope this will greatly improve the overall stability and performance for those of you who experienced problems in the earlier builds.

Besides fixing critical issues we’ve did a lot of minor tweaking trying to further improve the game.

We sincerely hope you’ll like the results of our work and please stay tuned for more!

Have a good one!

I am happy to announce that the Amiga version of Tower 57 is ready!

Although I didn't write the port myself, this is one milestone that is particularly close to my heart, as the Amiga 500 was my gateway into game making. So I'm glad I can finally cross "releasing an Amiga game" off my bucket list, although I'm admittedly about 25 years late (and it only runs on "modern" Amigas ^_^#)

Also, if you are active on Amiga forums / the Amiga scene, please help us spread the word! I would love to bring more games to the system that made me the gamer I am, so hopefully the reception will be good :)

Next up, and in no particular order, will be:
So as you can see I've still got quite some work ahead of me! In the meantime I sincerely hope all of you who own a modern Amiga system will enjoy the game.

Want to learn more? Read the full UPDATE ON KICKSTARTER!

we're back again with yet another update, and this time it's a big one!

Some of the highlights include:

As always I sincerely hope you will enjoy this update! If you have any questions, feedback, or suggestions please don't hesitate to contact me directly (benitosub [at] hotmail dot com) or send an email to techsupport [at] 11bitstudios.com.

As the year draws to a close, we just wanted to take this opportunity to thank everybody for purchasing the game! Your support means everything to us, and thanks to all the great feedback we have received we now have the possibility to tweak, refine, and expand the game even further.

This begins with Update 19.44 (which should be live by the time you read this) and an updated Canal map! We made some rooms bigger, added new rooms, and re-balanced every enemy encounter. We also added new secret rooms! ;)

Of course this update comes with the usual slew of bug fixes.

And finally the new map features a new enemy: the maggot hive (we tried to recapture some of that Alien Breed vibe with those pesky "face-huggers" chasing you down hallways). 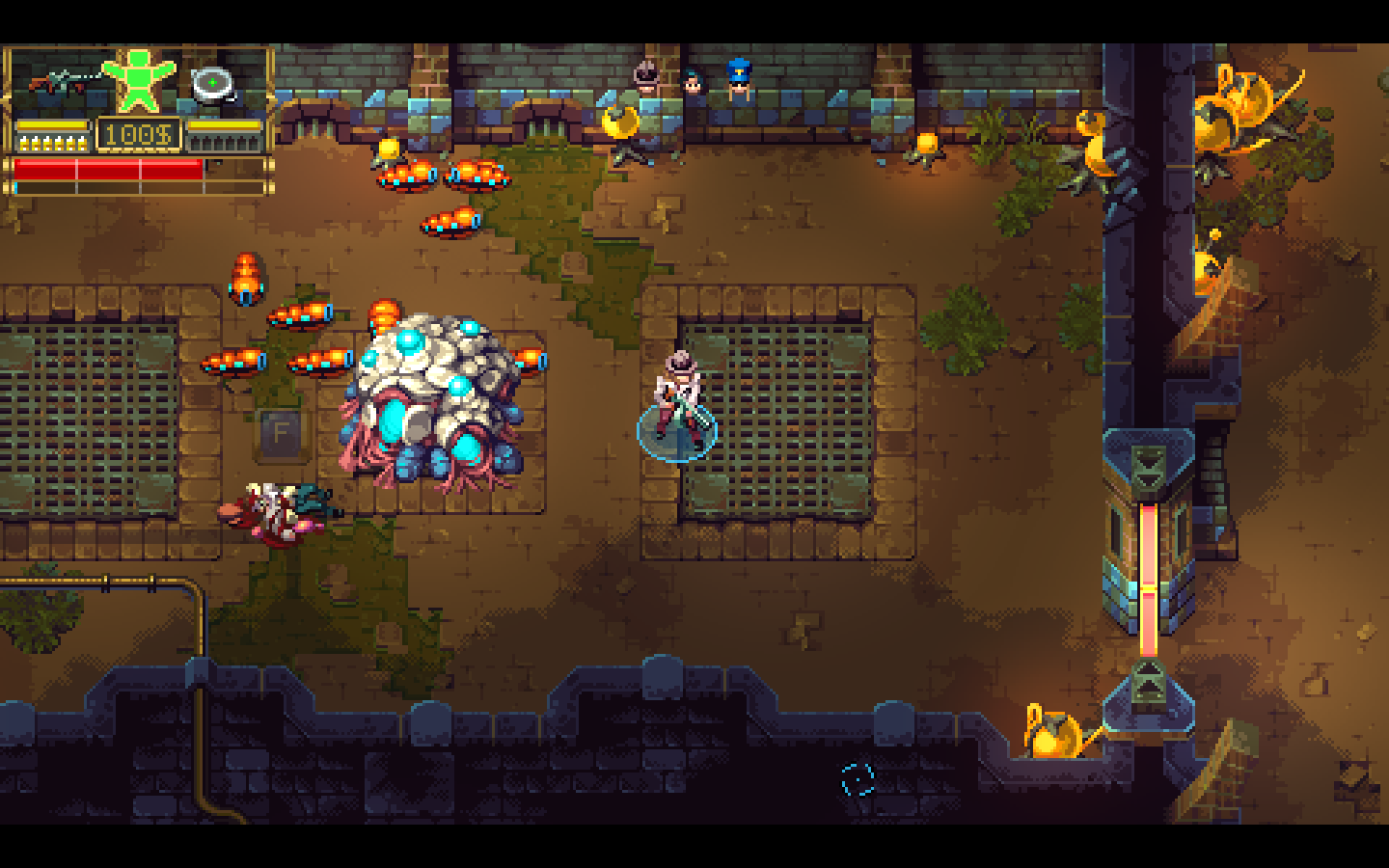 Rest assured that this is just a start, as we plan to "revisit" every level in the game (and potentially add a few more!).

In the meantime we would like to extend our wishes for a Merry Christmas to everybody! We sincerely hope that you will enjoy the update, as well as some quality time with your family or loved ones.

As part of our continued efforts to improve the game and integrate all the amazing feedback we got, we have just rolled out Update 19.11.

The full change-log is below, but I quickly wanted to go into a bit more detail regarding some core changes contained in this update:
There are a few more changes affecting gameplay (such as a new torso upgrade tier), but we're hoping these three will drastically improve the game's balance and the overall experience.

The next update will bring an expanded Canal map with new rooms and secret passages for you to discover, a new enemy, the ability to freely backtrack through most of the level, and a couple more cool surprises!

Until then, we both sincerely hope you will enjoy this update!

As always if you have any issues, questions, suggestions, or feedback please feel free to contact me directly (my username at hotmail dot com) or contact 11 bit studios through Steam or using techsupport@11bitstudios.com.

I just pushed our latest update (18.48) live! This time around the change log is a bit shorter, but the issues are a bit more important.

So without further ado, here's what we fixed/tweaked in 18.48:

ONLINE MULTIPLAYER:
SOUND:
LEVELS:
GAMEPLAY:
GRAPHICS:
We also posted an update on Kickstarter which outlines our plan for the coming weeks to improve the game's experience.

It was originally mostly intended for our backers, but it's available for anyone to view so if you are interested in where the game is headed, please feel free to visit it here.

And finally thank you to everyone who backed and/or purchased the game, and to everyone who left reviews, whether negative (your feedback is what helps us improve the game) or positive (your kind words are what keeps us pushing forward).

We plan to release another update next week which will address some seemingly smaller but potentially annoying issues, as well as more balancing and slowly but surely more content, so keep an eye out for that.

List of changes:
List of fixes:
More to come soon! Thank you for supporting us and thank you for all your comments! And as always - if you experience any additional issues/bugs, let us know by writing to techsupport@11bitstudios.com.

Dev of Tower 57 here! I just wanted to let everybody know that I am currently fixing the broken achievement progress bars.

This means that during the next few hours, you might notice your achievement progress bars resetting to 0 for the following achievements:
PLEASE DO NOT BE ALARMED!

This change is NOT permanent, and you will NOT lose any progress accumulated, even during the maintenance.
Instead the progress bars will sync up once you update to the next patch (which we are hoping to roll out today), and achievements will unlock accordingly.

I apologize to all of you for any inconvenience caused by this change.

Thank you again for purchasing Tower 57, we have heard your feedback loud and clear (both positive and negative) and are working very hard to fix, tweak and polish the game accordingly!

Build 18.2 is finally here to fix most of the problems you reported.
We were working very hard over the weekend to make it happen. The changelog is rather long but it's not the end of our work! We'll keep on fixing the issues you're encountering as soon as we can. We still plan to rebalance some things as well, if necessary.

List of changes:
List of fixes:
We're also improving our matchmaking system as an reaction to the "connection error" problem but since it's a bigger task we'll still need few extra days to finish this.

As always - if you experience any additional issues/bugs, let us know by writing to techsupport@11bitstudios.com. We're very grateful for your feedback!