Ossy Flawol here, lead designer of the P2:CE campaign! Major progress has been going on with the P2:CE Campaign - please note that we aren’t replacing the base Portal 2 campaign, it’ll still be there! - So far we have gotten the basic gist of what every course is planned to focus on, we have two major cut elements returning, being Adhesion Gel and the Schrodinger Cube, which already have a few puzzles designed each, and we also have a returning mechanic in the form of the Rocket Turret - yes, we’re not joking. P2:CE’s campaign is also planned to feature a special Paint Gun course, and one more completely new element that we’re keeping wraps under now until we can get it to a functional state. 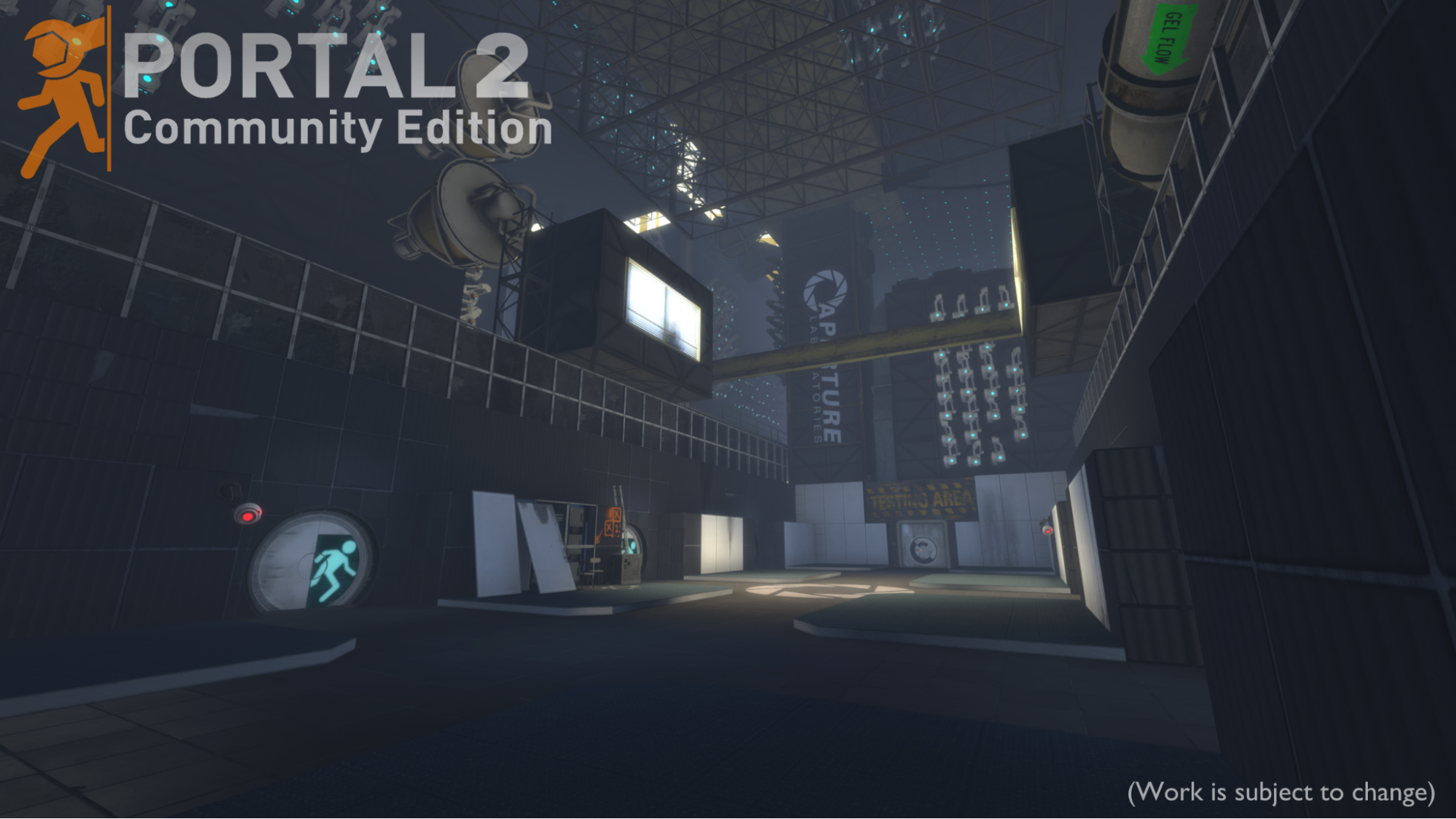 If you couldn’t catch the mention of a ‘course’ back there, P2:CE’s campaign is focused around a structure not too different to that of the Portal 2 Co-op Campaign, featuring a central hub where players will get to choose which course they’d like to go for! We want to give the player options in terms of what they’d like to solve first. On the topic of player choice, we’d like to mention that the player character will be one of the Co-op Bots, and it’s completely up to the player as to who they’d like to play as throughout the campaign, you can even switch if you’ve grown bored of that specific robot.

As for the puzzles themselves, most of them are planned to be around the level of Portal 2 difficulty, a lot of these elements will be getting their very first true time to shine in P2:CE’s campaign, as a result, the campaign acts almost like a ‘tech demo’, intended to ease players into how these elements work and to showcase some of their potential, especially when it comes to an element like Adhesion Gel, where disorientation is very likely to occur. We’ve attempted to combat the disorientation problem by setting the course in an Overgrown environment, where players can get a sense of gravity by taking a look at drooping plant-life, but beta testing will have to prove how effective this might be.

We hope you’ll enjoy the P2:CE Campaign when the mod fully releases, our beta-testers will soon be given the chance to test these puzzles to ensure you all play a quality product once we’re out! :D

Hi, this is craftablescience, and I work on the stuff that you see when you launch P2:CE. Right now, that mostly means the main menu, pause screen, and loading screen. In case you didn't know, Panorama is a UI framework from CS:GO, and it allows developers without an NDA to create and modify UI elements. This is what we're using to develop the new UI, rather than the older framework present in Portal 2, VGUI, which is much more hardcoded and much less fun to use. The VGUI main menu can still be accessed in P2:CE when launching with the `-legacyui` argument, but there are no plans right now to modify it from the standard Portal 2 menu any further than it has been. Going back to Panorama, so far all CSS stylesheets (approximately 10,000 lines) have been converted to Sass, which makes development much easier and makes the files more readable, and brings us all the other benefits of Sass over CSS like performing mathematical operations inside property values. For the loading screen, the most improvements were made by JJL77, who replaced the CS:GO loading screen with a loading screen that more closely resembles Portal 2's. I later modified it to transition between two images instead of displaying one, added coop and the Super 8 teaser map loading images, and added logic for displaying the proper loading images if the same map is reloaded. 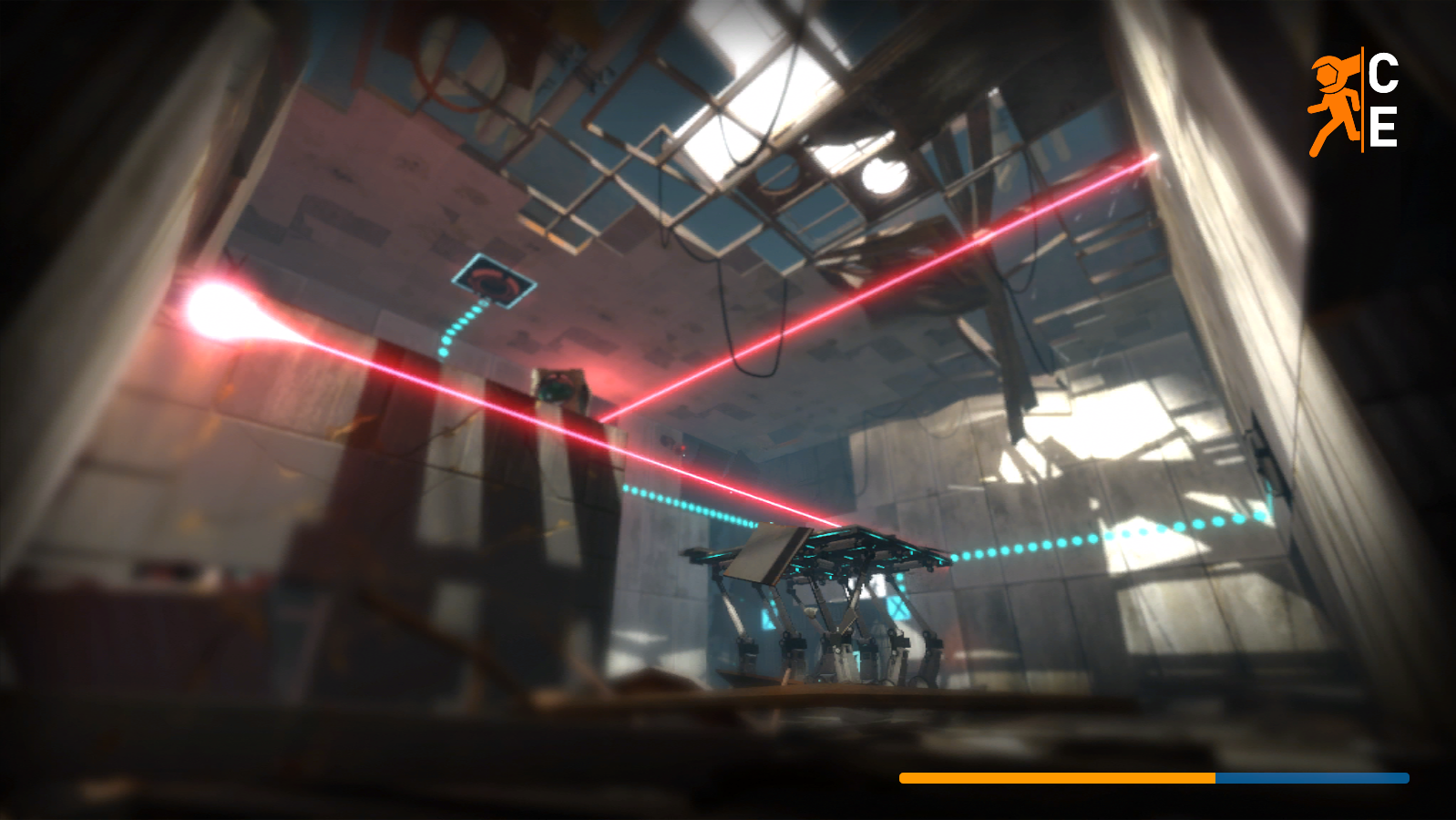 The loading screen is still a work in progress just like the main menu, but there shouldn't be any major changes to it visually from this point. On the other hand, the main menu will probably change a great deal visually, and it's too early to release the changes to it (even in a beta). Other notable additions to Panorama include the fantastic Panorama console by BLT that replaces the VGUI console… 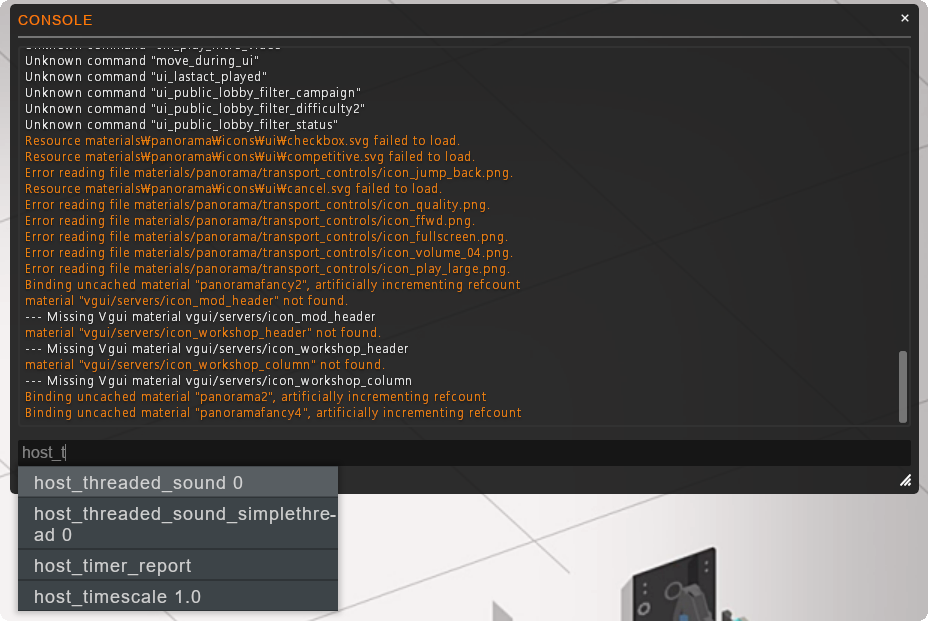 …and on the JavaScript end, a persistent storage API by SCell which I've already found a few uses for in the main menu. It's somewhat analogous to cookies in a web browser. Our future plans for the UI include work on the main menu, as well as stripping unused CS:GO code, layouts, and stylesheets to make the UI open source.

Hello! I’m Bon (or Bonny, or BonnyAnimations - I go by a lot of names -) and I’m one of the artists for the P2:CE team. So far I made the remakes of the Main Menu backgrounds in Blender 3.0. Some are still going to be re-adjusted such as the “Space Phase” background to make the stars more visible however, so what you see in-game may not be the final iteration. In future updates, I am going to also be remaking the Loading Screens which will take a considerable amount longer than what the backgrounds took - but it will be done!

One of the main things I like to focus on while making these is to make them look good instead of accurate. What's the point of remaking backgrounds if it's just supposed to be an accurate copy? I put a lot of time and effort into making these and I hope you will like the final product of the renders!

Here is a comparison between one of the old and new backgrounds! 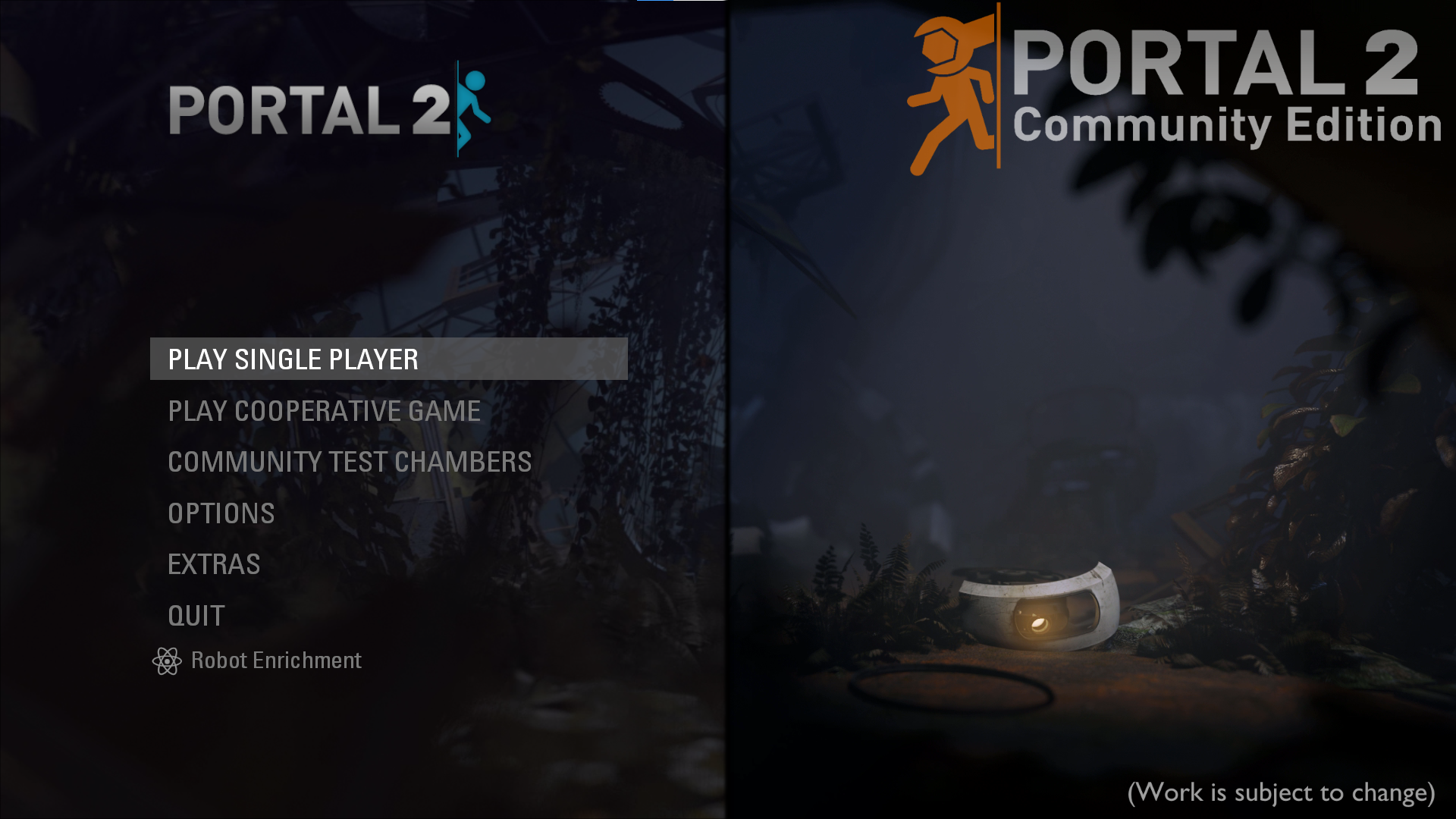 In other news, Frosti and I are working on certain models for the game, such as the Paint Gun and Schrodinger Cube. They will have completely new models when the game is fully released and we’re very excited for them! However the idea of an Old Aperture pain gun and a New Aperture paint gun has been scrapped due to the amount of effort for me to model, rig, animate and set up in source (especially for the Old Aperture variant). So, unfortunately, there will be no Old Aperture-esqe gun - this of course doesn’t mean we’re going to limit you from adding a model for yourself!

We’re also looking into enhancing the materials of some models in the game - most notably puzzle elements and the NPCs! They will take advantage of the new PBR shader offered from Momentum mod to give these models an extra “ufmp”. This decision however is not final as we only had short discussions on this topic but it is something that we will look into and we hope you're going to like it!

While the mappers, artists and UI designers have been busy with the “frontend” of the game, we programmers have been hard at work improving the engine and fixing critical bugs on the C++ side of things. We’ve got quite a lot of exciting stuff to share, so fasten your seatbelts!

Back in May, we shipped native Linux support for DXVK, a DirectX 9/11 to Vulkan translation layer, replacing the older DirectX 9 to OpenGL translation layer called ToGL. While this change had no visible effect on the game, (thankfully, actually!) it alleviated many of the problems we had with ToGL, and even resulted in some performance gains. The only downside is that P2CE now requires a Vulkan capable GPU on Linux, but the Steam Hardware Survey (and a survey of our testers) indicates that a vast majority of Linux users have a compatible GPU. We’re extremely grateful for all of the open source contributors to DXVK, without them this wouldn’t be possible!

In March, all Chaos games shipped with a brand new experimental DirectX 11 renderer written by SlidyBat and SCell. Over the last 7 months, we’ve been hard at work improving and polishing the new renderer in hopes of eventually replacing the old DirectX 9 renderer with it. While there are still some bugs to iron out, P2:CE and Momentum Mod work almost flawlessly with the new renderer. This new renderer allows us to take advantage of Shader Model 5.0, compute shaders, tessellation, dynamic linking, multithreading and much much more. Thanks to DXVK support, we can also ship the DirectX 11 renderer on Linux with almost no modification!

As mentioned in the section about UI, we’ve been working on replacing Portal 2’s VGUI with a brand new Panorama-based UI, so there’s been considerable effort going into that. For those who don’t know, Panorama is a web-like UI toolkit built by Valve for use in Source 2, CSGO and Steam. Back in August, SCell added native support for sass/scss in Panorama, meaning you don’t need to use css nor compile your sass/scss sources. Web developers should feel right at home! We’ve also added a number of brand new javascript APIs including a discord/steam rich presence API, persistent storage and an RSS feed API. 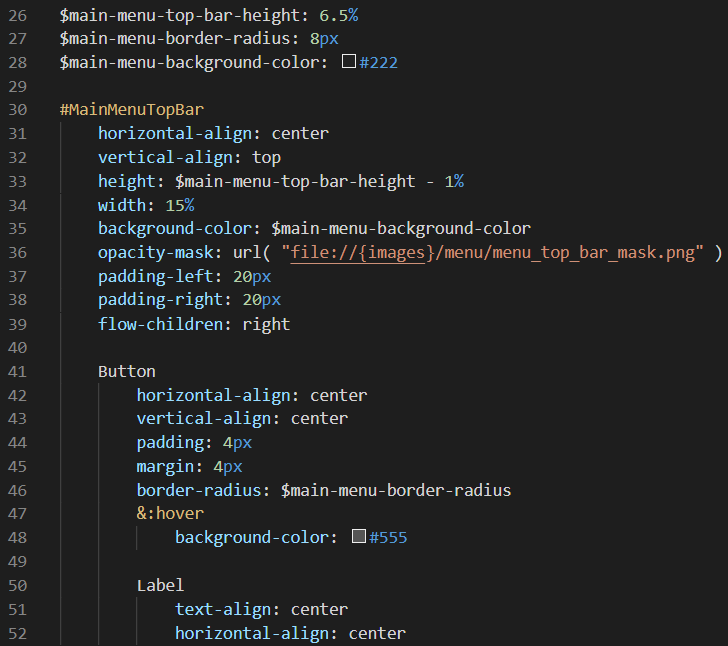 More recently, we ported most compile tools and utilities to Linux. This allows Linux users to compile maps and assets natively instead of using WINE to run the Windows executables. In our testing, VRAD produced the same results regardless of OS, whereas when VRAD was run through WINE, it produced incorrect results. The only tools which have not been ported to Linux are glview, hlmv and faceposer, as they rely heavily on Windows APIs and are archaic tools anyway- not really worth porting!

On the topic of tools, we’ve also begun porting Hammer to Qt 6.2.0, using a MFC/Qt compatibility layer. As of right now, only a couple dialogs in Hammer use Qt, but many more are on the way. The end goal is to completely move Hammer over to Qt from MFC. This will allow us to rapidly iterate on the UI, support Hi-DPI displays, themes and even other operating systems like Linux.

Aside from the larger changes, we’ve been making numerous stability improvements, bug fixes and optimizing the game in a variety of ways. For a more comprehensive list of features and resolved bugs, see our issue tackers on GitHub here[github.com] and here[github.com].

In total, there have been over 3,960 commits to our main repository with more than 640 pull requests merged to date. I’m extremely pleased with what we’ve been able to accomplish on Chaos thus far and we can’t wait to showcase the rest of the engine in the future :)

Changes to the Team
By JJL77

A couple weeks ago we put out a call for motivated artists, level designers and web developers who want to help out with P2CE’s development. We’re pleased to announce the following new additions to our team!
We’d also like to extend a warm welcome to the following team members who joined the team before that:

There are still some roles available, so If you’re interested in joining the team, we have an application form here[forms.gle].

Release Date
Now that we’re done showing off what we’ve been working on, we’ve got to discuss the release date. Unfortunately, due to unforeseen circumstances, we’ve hit some pretty major delays. As such, we’ve decided to postpone P2CE’s release date until mid 2022.

We’ll be keeping the community updated with the latest P2CE developments through development blogs like this, so stay tuned for more!
~ The P2CE Team

Big thanks to the P2CE and Momentum teams who helped make this possible!