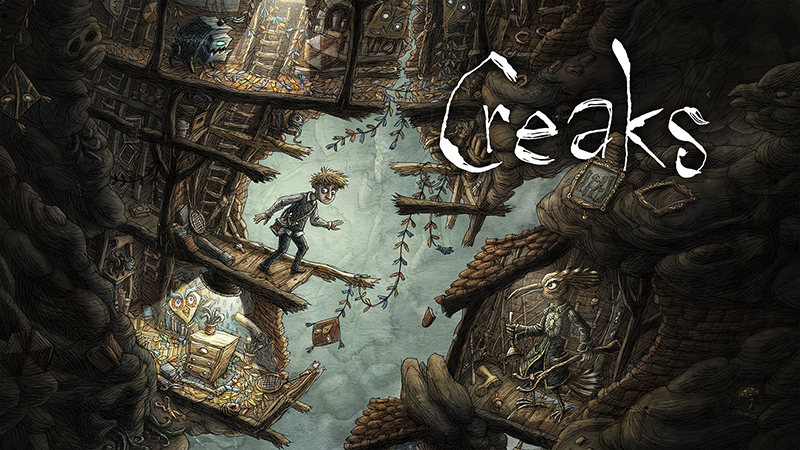 After many, many years of development, Creaks finally landed on Steam. You can now play it on both Windows and Mac, and if you’re into atmospheric, organic-sounding music, you can get the „Collector’s Edition“ that includes the game, original soundtrack from Hidden Orchestra and a digital art book with design sketches from creators Radim Jurda and Jan Chlup.

Thank you for your support - let us know what you think!!
Lukas

Samorost 3
65
5
Creaks from Samorost devs is launching on Steam next week!
Jul 15
Hi everyone,

I am excited to finally let you know that Creaks, our latest surreal puzzler, is launching on Steam next Wednesday, July 22! Please check out the game's Steam page and add the game to your wishlist if you like what you see ːsamorost_spiritː

Creaks takes you on a visit to a mysterious towering mansion, inhabited by eccentric avian folk and strange creatures, which may or may not be as dangerous as they seem. In their animated form, these monsters called creaks are deadly enemies you should always keep your distance from. However, as soon as you manage to trap them under a beam of light, they transform into harmless furniture that might be just as useful when you’re solving many of the game’s elaborate puzzles. Players will meet several types of creaks in the game, and each of them behaves differently - while dogs will chase you on sight and spies will copy or mirror your movement, the jellyfish-like creatures composedly patrol the area.

Inbetween individual levels and challenges, players will get to explore the house for a series of hand-crafted paintings, some of which were carefully hidden in discoverable secret rooms. About a third of the 35 collectible pieces are playable mini-games, taking on the role of little arcade cabinets in the aesthetic of 18th and 19th-century wall art.

A game inspired by the topics of ambiguity and pareidolia - the psychological phenomenon of “seeing things” - Creaks aims to surprise players with its diverse surreal environments, hand-drawn, hand-painted, and carefully animated, as well as refined puzzles. The visual art goes hand-in-hand with music from Brighton-based composer and multi-instrumentalist Joe Acheson, aka Hidden Orchestra. He delivered an eclectic score that adaptively changes based on your progression within each of the game’s levels and often drops the beat to celebrate the moment you finally figure it out. Instruments Joe used on this soundtrack, his first-ever work for a video game, are ranging from zithers and flutes to organs and choirs to modular synthesizers.

Thank you for supporting our games! We're looking forward to hear and read what you think about Creaks. ːmuchomurkaː
Lukas 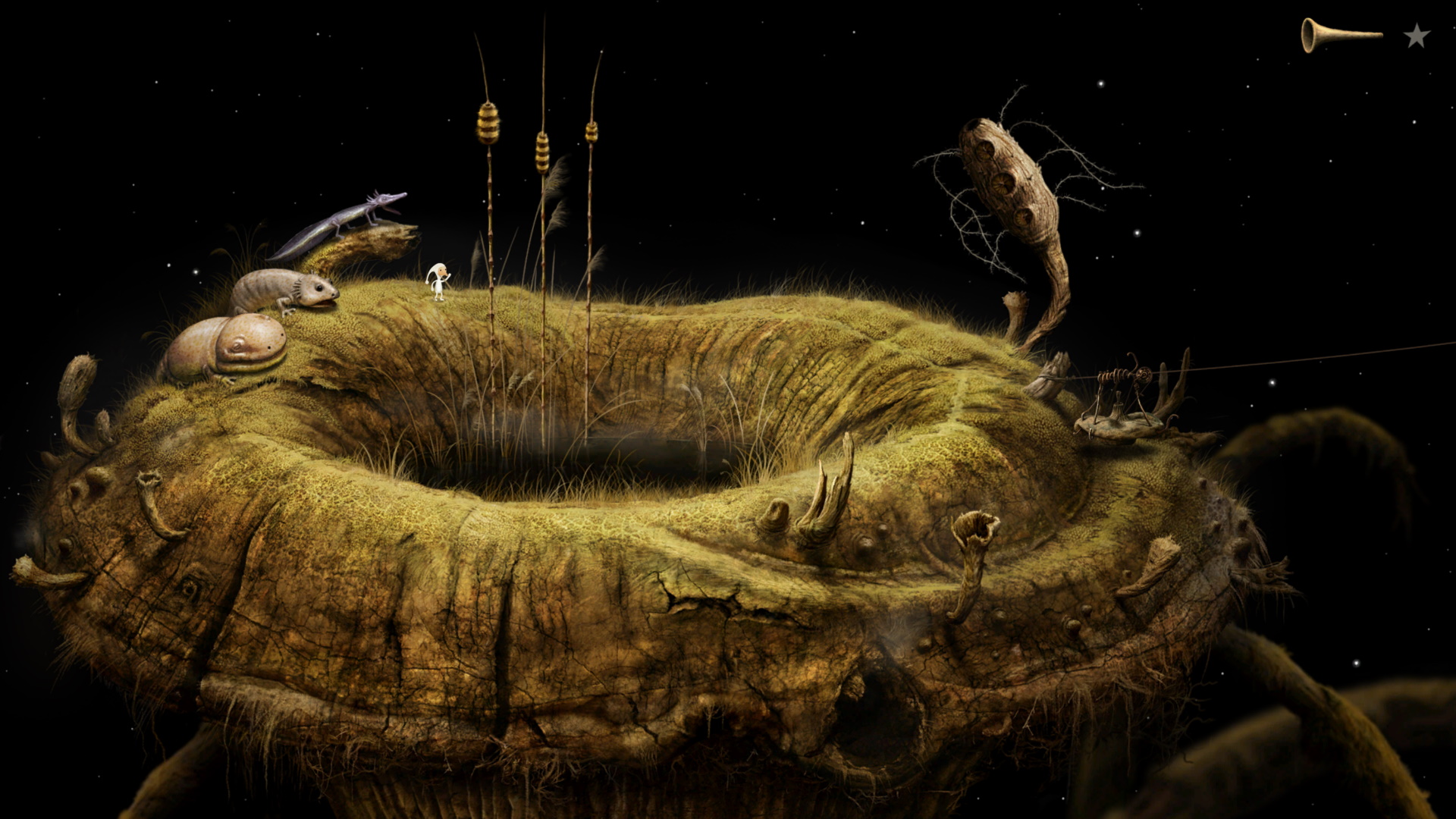 Have You Played? is an endless stream of game retrospectives. One a day, every day, perhaps for all time.>

One of the last things I expected to do in Samorost 3 was have an impromptu jam session with a singing frog hippo, bopping lizard ferret and tooting fish fox. Apparently they like busting out some tunes when the fuzzy bee bums on the nearby reeds are arranged at specific heights, and they really> get into the groove when you start dancing alongside them. It remains one of the strangest, but ultimately most satisfying puzzles in the entire game, and I’m glad I got to witness it before they promptly fell asleep again, those lazy sods.

Rock, Paper, Shotgun
3
0
Pilgrims from the developer of Samorost out now on Steam
Oct 7, 2019

I am pleased to announce that our latest game Pilgrims is now available on Steam!

Pilgrims is a short non-linear adventure game set in a charming little kingdom, inspired by old Central and Eastern European fairy tales and, partially, John Steinbeck’s books. It tells the story of Tramp, Granny, Bandit and Devil, four different characters each with their own quirks and perks, who eventually end up roaming the land together, dealing with strangers and helping each other out.

The game’s key gameplay mechanic was inspired by a puzzle featured in Samorost 3, one of Amanita’s previous titles, in which players were required to solve a problem by experimenting with the interaction of various playing cards. The player would then be rewarded with gentle humor, a funny animation accompanied by sounds. Pilgrims is therefore filled with all sorts of surprising, lighthearted situations, encouraging the player to try out different combinations since many problems can be solved in a number of different ways. The game supports replayability with 45 unlockable achievements.

Pilgrims was developed by a team led by Jakub Dvorsky, who designed the game and took over the visual art. He was joined by his long-term collaborator, animator Václav Blín, programmer Michal Berlinger, and the classic duo Tomáš ‘Floex’ Dvořák and Tomáš ‘Moták’ Dvořák on music and sound effects respectively. The game was in development for 2 years. 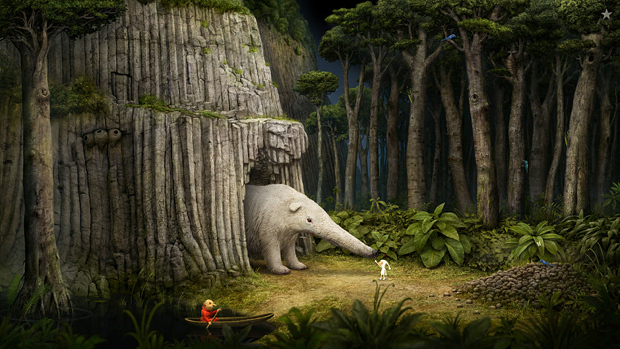 Today we're celebrating the World Environment Day and we're proud to be part of a special Steam sale, highlighting games with a clear relation to nature, along with Botanicula, Mountain, Fugl, Subnautica and more. A portion of all proceeds will be donated to various organizations such as Greenpeace, World Land Trust or The Nature Conservatory. In addition, One Tree Planted will plant a tree for each copy of Playne sold during the event.

I am happy to announce that we are donating 50% of our proceeds from this sale to DUHA, a Czech environmental movement saving the wilderness. You can read more about DUHA on their website[www.hnutiduha.cz].

I am excited to announce that our next game 'Creaks' is coming to Steam next year!

We just launched the Steam page (which is also where you can check out the first teaser trailer and a handful of screenshots) so you can easily add Creaks to your wishlist.

Creaks is being developed by one of Amanita’s new teams, headed by Czech designer and artist Radim Jurda. The music (for both the teaser and the game) was done by Scottish composer and multi-instrumentalist Joe Acheson aka Hidden Orchestra.

Follow Creaks on Steam so you don't miss any of the upcoming details!

Come and chat with fellow mushroom pickers, get the latest news, TOP SECRET sneak peeks and speculate about 'Machinarium 2'! (even though we're not working on it)

Please join us (and invite your friends!) via this link: https://discord.gg/Gr4Ec6K

Meet you there!
Lukas

Samorost 3
59
5
Amanita Design Open Up in #DevQuest
Apr 3, 2018
Learn a thing or two about the developers of Samorost 3 in the first episode of #DevQuest hosted by our friend Adriaan de Jongh!

#DevQuest is a brilliantly crafted documentary series highlighting indie developers from all over the world. We're super delighted to be a part of this and we highly recommend you to watch the other episodes starring Compulsion Games, KO_OP Mode or Night School Studio!

...there's also a tiny sneak peek at one of our upcoming games :samorost_mouse: 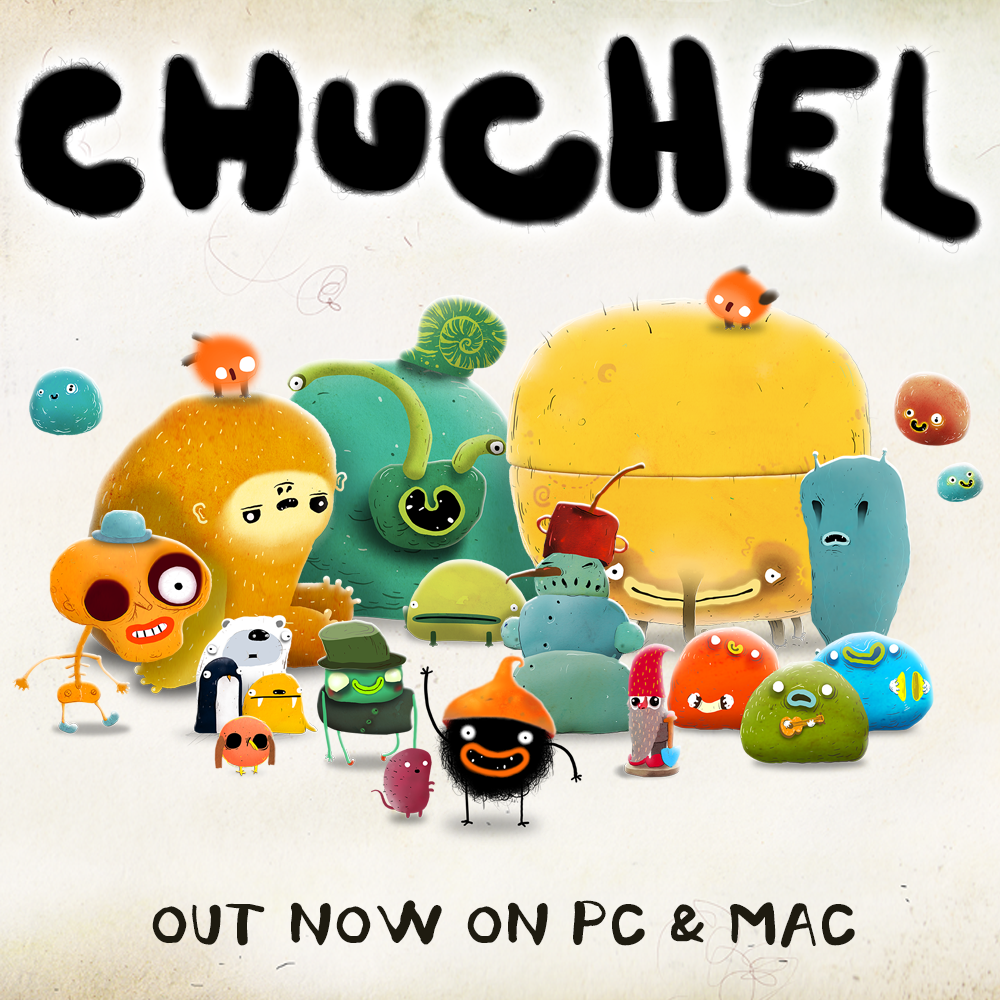 CHUCHEL, the new game from the creators of Machinarium, Botanicula and Samorost, is now available on Steam for Windows PC and Mac!

Just like any Amanita game before, CHUCHEL immediately strikes you with its distinctive visual style and sheer playfulness, however, CHUCHEL is not a game of complex backgrounds and extraordinarily complicated puzzles – this time it is all about humor, laughs and cherries.

Why cherries? Because that’s what Chuchel, the game’s eponymous hairy hero, craves the most. In order to reclaim the precious red fruit, he needs the players’ help to overcome various challenges ranging from logical puzzles to robot battles to escaping swarms of berserk Pac-Men. Each level is built upon Jaromir Plachy’s trademark style of animation and fittingly witty music from the IGF Award winning Czech band Dva. With dozens of hilarious gags, bizarre characters and a heart-warming little story, CHUCHEL has all the resources to cheer you up!

https://www.youtube.com/watch?v=pkWvZ6Bpx7M
From the band who charmed the world the fantastic Botanicula soundtrack comes another album full of catchy melodies and bold rhythms. Young Chuchels is a banging track heavily influenced by hip-hop - a genre you wouldn't expect from an Amanita Design production. We've been banging our heads to this for 3 days straight.

'Cherries on Air' with 44 minutes of original music by DVA will be available on Steam from March 7th as downloadable content along with a digital art book and a special CHUCHEL Sans font!

It's time to answer one of the deepest questions of all time - what the actual heck is Chuchel?!

Czech & Weird
You guys already know we like to give our games some odd names and sometimes we even mix in a bit of Czech, our native language. For example 'Samorost' is a beautiful word for an object or a person that was formed entirely by the effects of natural influences. Such as this wooden animal. 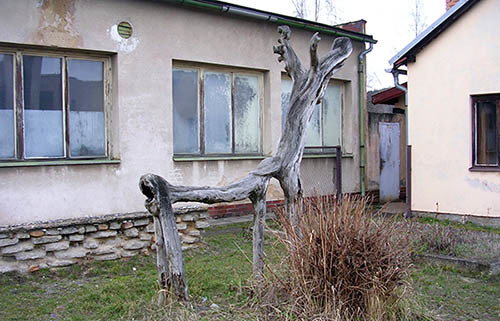 Chuchel is also a word coming from the Czech language. We use it to describe a 'ball of hair and dust'. You know, that soft kind of mess which appears in your house when you don't clean it properly. The less cleaning you do, the more chuchels you've got - that's how it works. This thing below is a prime example of chuchel found at Jakub Dvorsky's household. Magnificent, isn't it?

By the way, Kekel, Chuchel's pet buddy/rival, also got his name from a Czech word for 'something terribly disgusting'. Seriously. 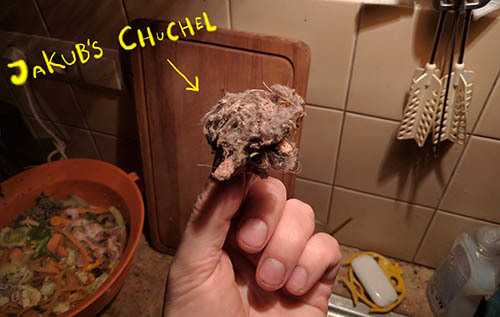 There's even a village[www.google.cz] called Chuchel. Rumors say it's got the highest consumption of cherries per capita in the entire world. Interesting. Reportedly it only has about 50 inhabitants, which seems appropriate for such a sacred place. Pilgrimage, anyone?

Quick maths!
Anyway, our Chuchel is by no means disgusting. He's rather cute, cheerful, although a tad bit annoying and simple. His strong personality has two sources of inspiration - one of them is Jaromir Plachy, the creator of Chuchel himself, the other would be Jaromir's dog Anca. While Jaromir sees himself as a slightly bothersome person (only sometimes), Anca is an incredibly nice and naive being. Combine these two personalities and you'll get the most fabulous Chuchel out there.

Get ready to experience Chuchel's hilarious tantrums on your own - the game arrives to Windows PC & Mac on March 7!!

Add it to your wishlist now and get notified as soon as it's available :mrfeather: From the team most famous for Machinarium, Aminita Design, comes the third game in the Samorost series. Don’t worry if you’ve never heard of the first two – they were both tiny Flash games. Samorost 3 [official site] is a full-length, full-screen adventure that requires no prior knowledge. How does the adventure/puzzle game hold up at this scale? Here’s wot I think:>

Samorost 3 is an exploration adventure and puzzle game from the award-winning creators of Machinarium and Botanicula. Travel across space to nine unique worlds teeming with colorful challenges, creatures and surprises to discover, brought to life with beautiful artwork, sound and music.

Samorost 3 is an exploration adventure and puzzle game from the award-winning creators of Machinarium and Botanicula. Travel across space to nine unique worlds teeming with colorful challenges, creatures and surprises to discover, brought to life with beautiful artwork, sound and music.