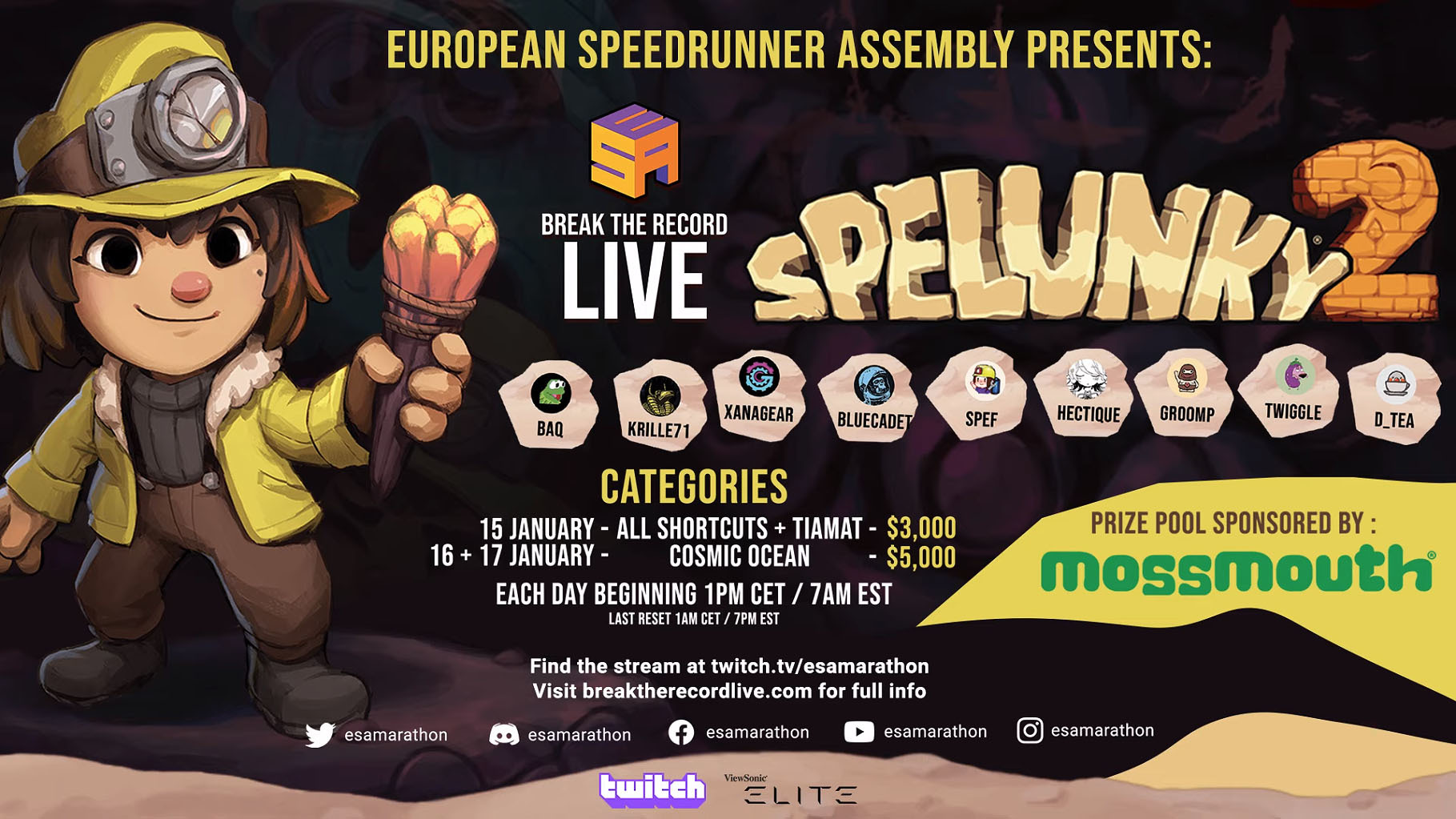 The Spelunky 2 Break the Record: LIVE speedrunning event is going on right now! The first day has already seen a World Record broken live by d_tea in the All Shortcuts + Tiamat category. But the competition is still very heated in its final hours, with the other runners putting up incredible times in this high-risk, high-reward speedrun.

On Saturday and Sunday, the category switches over to Cosmic Ocean, a grueling endurance run to make it past the deepest parts of the game. Who will finish the first run? And who will take the top prize after two days?!

Many thanks to the European Speedrunner Assembly (ESA) for putting on the event! Watch it on their Twitch channel right here:

For more information about the event and the runners, go here[esamarathon.com].

Note: 1.19.8c is required to start new online games.
Regarding invites, we're reaching out to the platform holder to see what information they can provide about the issue on their end.
We've also reached Valve to ask for information regarding how to integrate our infrastructure with the recent player feature without depending on Steam matchmaking / lobbies.

Spelunky 2
317
19
The Online Multiplayer Public Beta is Here!
Dec 14, 2020
Whew! This morning we quietly released a giant update to Spelunky 2 on Steam that included online multiplayer and we were hit with some good news and some bad news! The good news is that matchmaking works as intended and it seems like the improvements BlitWorks has made over the past month have mostly paid off - players are having a great time teaming up with random players and going on adventures together.

The bad news was that invites seemed to be broken for quite a few players, forcing them to try and find friends through matchmaking! This did not come up at all during the closed beta, and we suspected that the addition of multiple servers in preparation for the (much larger, more global) public beta might be related to the issue. Reproducing these kinds of bugs can be tricky, but thankfully we were able to find a case of the bug to test and then put out a patch that seems to have fixed it for a lot of affected players!

What's next? Work will continue for the rest of the year and into next year to fix bugs with online multiplayer, as well as solve some of the unique design problems that have come up (hence, why we're calling this a "public beta" even though it's possible to play through the entire game online). As always, it's your support and your feedback that makes this possible at all. With that in mind, here are some of our other thoughts and plans surrounding online that may answer some of your questions about the future:


If you still have questions about online multiplayer or feedback about your experiences, we'll be monitoring the Steam forums and our official Spelunky 2 Discord[discord.gg] as usual! Thank you!

How to Invite Friends to Play on Steam!
1. First of all, you need to be in the game, in the online lobby. You can go there by selecting "Online" from the Main Menu. Make sure you're on at least version 1.19.7a, which has the invite fix. You can see the version number in the upper-right corner of the title screen.

2. From there, you can invite through Steam or Discord[discord.gg].

3. Inviting from Steam: From the lobby, press the key (displayed on the screen) to initiate an invite. That should open up the Steam Overlay and your friends list. Right-click a friend on your friends list and "Invite to Play".

If you do not see the "Invite to Play" option, try right-clicking on your friend from the FRIENDS menu on the left side of the Overlay instead (above SCREENSHOTS). Select "Invite to Game" from there.

If you do not see the FRIENDS menu on the left side of the Overlay (above SCREENSHOTS), exit and launch again steam.

4. Inviting from Discord: From the lobby, tab out to Discord and DM a friend or find the matchmaking channel in our official Spelunky 2 Discord. Next to the message prompt, you should see a "+". Underneath that, it should say "Spelunky 2 supports game invites". Click the "+" to send an invite.

Note that in order for Discord invites to work, your Game Activity needs to be visible. You can set this by going to "User Settings" (the cog to the right of your name), then "Game Activity".