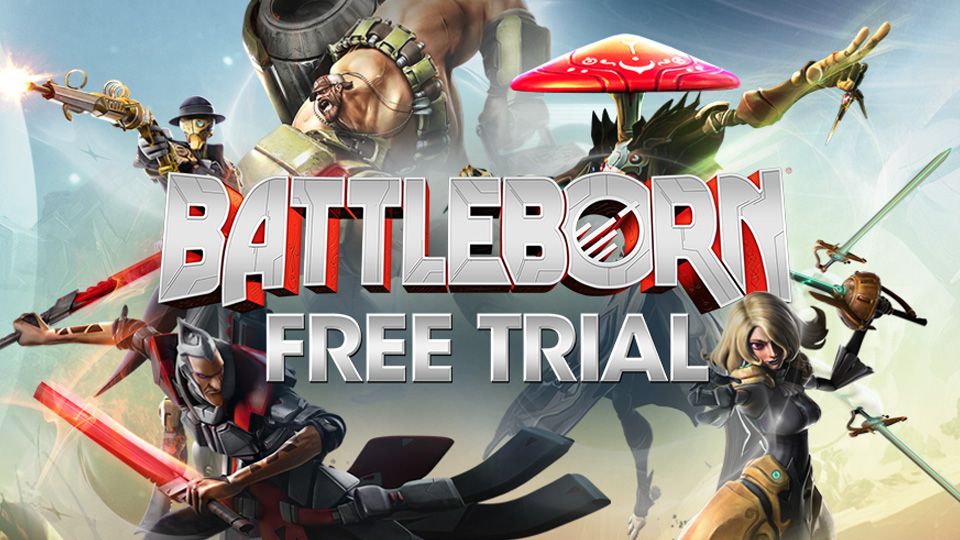 We’re excited to announce a new and incredible way to jump into the hero-shooter, Battleborn! Starting today players can experience unlimited competitive multiplayer for FREE with the Battleborn Free Trial.

Players can now pick up Battleborn as a free downloadable experience that grants UNLIMITED access to all competitive multiplayer gameplay modes and maps, without any time limits or level caps. To keep things fresh, there is a weekly rotation of six heroes from the roster of 30 total heroes. Progress with each hero and player account progression is also permanent, so when the same character comes back around players can pick them up where they left off. To download the Battleborn Free Trial, head to the PlayStation 4, Xbox One, or Steam store page and search for Battleborn. Each page has a “Try Now” or "Play Game" button to download the Free Trial.

Already own Battleborn? Then you’re a Founder! Keep on reading to find out what being a Founder entails.


NEW PLAYER EXPERIENCE
New players won’t have to worry about matchmaking against a team with Command Rank 100 and legendary gear out of the gate. With the launch of the Free Trial, we’re also introducing a queue specifically for new players. This queue was created just for new and lower rank players to learn the ropes without being matched with more experienced players. Even if you’re a quick learner or an experienced MOBA player, we wanted to give you enough time to find your Battleborn play style and favorite heroes. Once a player masters Battleborn’s mechanics and reaches Command Rank 20, the Novice Queue will disappear and they be able to join other Battleborn players in the regular queues.

If you’re new to Battleborn, or just feeling a little rusty, take advantage of the new Training Modes, including an Incursion Tutorial to build up competitive multiplayer skills, and The Dojo, where players can test drive all 30 Battleborn heroes against waves of minions, regardless of whether they’re unlocked outside of The Dojo.


UNLOCK MORE CONTENT
Played it, loved it, want more? We got you. Players can unlock heroes, customizations for your favorite hero, experience boosters, or even the Story Mode Operations in the Marketplace individually. In the Marketplace, you’ll find a number of items that can be purchased with Credits earned in-game or Platinum premium currency including:

Players can also head to either digital or retail stores to upgrade to the full game and unlock all 25 base characters, all eight Story Mode missions and the Prologue, as well as permanent access to private matches. Upgrading is seamless and any player going from the Free Trial to the full game will receive in-game credits for any duplicated content that was purchased a la carte. Additionally, character challenges and masteries will carry over with the upgrade, and players will be granted access to earn the character masteries that are only available through Story Mode missions.

PlayStation 4, Xbox One, and Steam achievements or trophies will be granted upon upgrading to the full game. In order to complete the transfer of challenges, masteries, achievements, and trophies, complete the task one more time by hopping into a match or mission to complete the action (ex. get a kill, play as a Peacekeeper) and earn the corresponding reward. 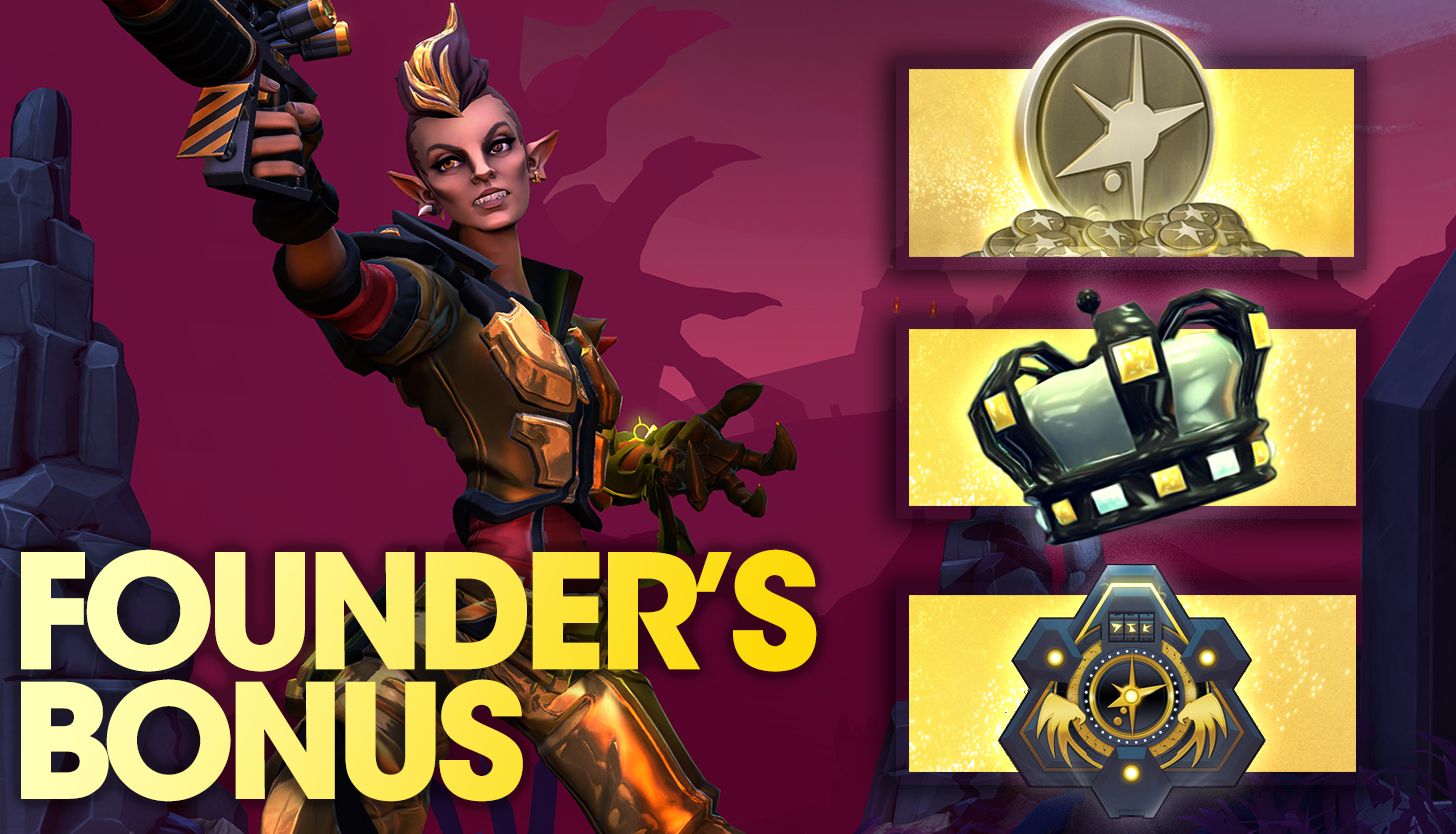 FOUNDER STATUS
Anyone who’s already purchased and played the retail version of Battleborn prior to the launch of the Free Trial (June 6, 2017) has been awarded Founder Status. Founders have been here with us honing their skills in multiplayer matches and protecting the last star from Rendain and the Varelsi, and we’re proud to reward these veteran players with the Founder title and Founders bonus content, including Legendary Gear, 1,000 Platinum, 50,000 Credits, Loot Packs and more, plus an exclusive “Founder’s Crown” Flair item. What’s flair? These special pieces of gear have visual components for your hero such as ears, horns and headwear. Flair has a chance to drop from any loot pack, and is a guaranteed drop from the Magnus Loot Pack, a new loot pack introduced with the arrival of the Free Trial.

For complete details on the Founders Bonus, check out the post here[battleborn.com] and if you’re a veteran player we invite you to join the Reddit community here to pass on your Battleborn experience to the new heroes arriving daily.

For additional details on the new features of the Battleborn Free Trial, check out the complete FAQ here[battleborn.com]. If you have any questions and run into any issues, please reach out to us at 2K Support[support.2k.com].

Head over to the Gearbox forums for highlights on the next update, new lore, and a Battleborn anniversary SHiFT code! Get the latest Battleborn news in this week’s Battleplan[forums.gearboxsoftware.com].

Head to the forums for more info on future Battleplans, Battleborn lore getting its own home, a peek into upcoming character tweaks, and a SHiFT code. Get the latest Battleborn news in this week’s Battleplan[forums.gearboxsoftware.com].

Queue updates, giant Battleborn, and some cross-genre gaming - Head over to the Gearbox forums for the latest Battleborn news in this week’s Battleplan[forums.gearboxsoftware.com].

Gravity Rumble starts this weekend, and there's new lore and a SHiFT code for you in the Battleplan! Head over to the Gearbox forums for the latest Battleborn news in this week’s Battleplan[forums.gearboxsoftware.com].

It’s Thursday once again and that means we’re coming at you with another Battleplan. Head over to the Gearbox forums for the latest Battleborn news in this week’s Battleplan[forums.gearboxsoftware.com].

Check out a recap of the Inside Gearbox PAX East panel, take a look at some great cosplay, and prepare yourself for Warfare Rumble this weekend! Head over to the Gearbox forums for the latest Battleborn news in this week’s Battleplan[forums.gearboxsoftware.com].

DLC 5 is here, there's new lore, and more info on the upcoming tournament. Head over to the Gearbox forums for the latest Battleborn news in this week’s Battleplan[forums.gearboxsoftware.com]. 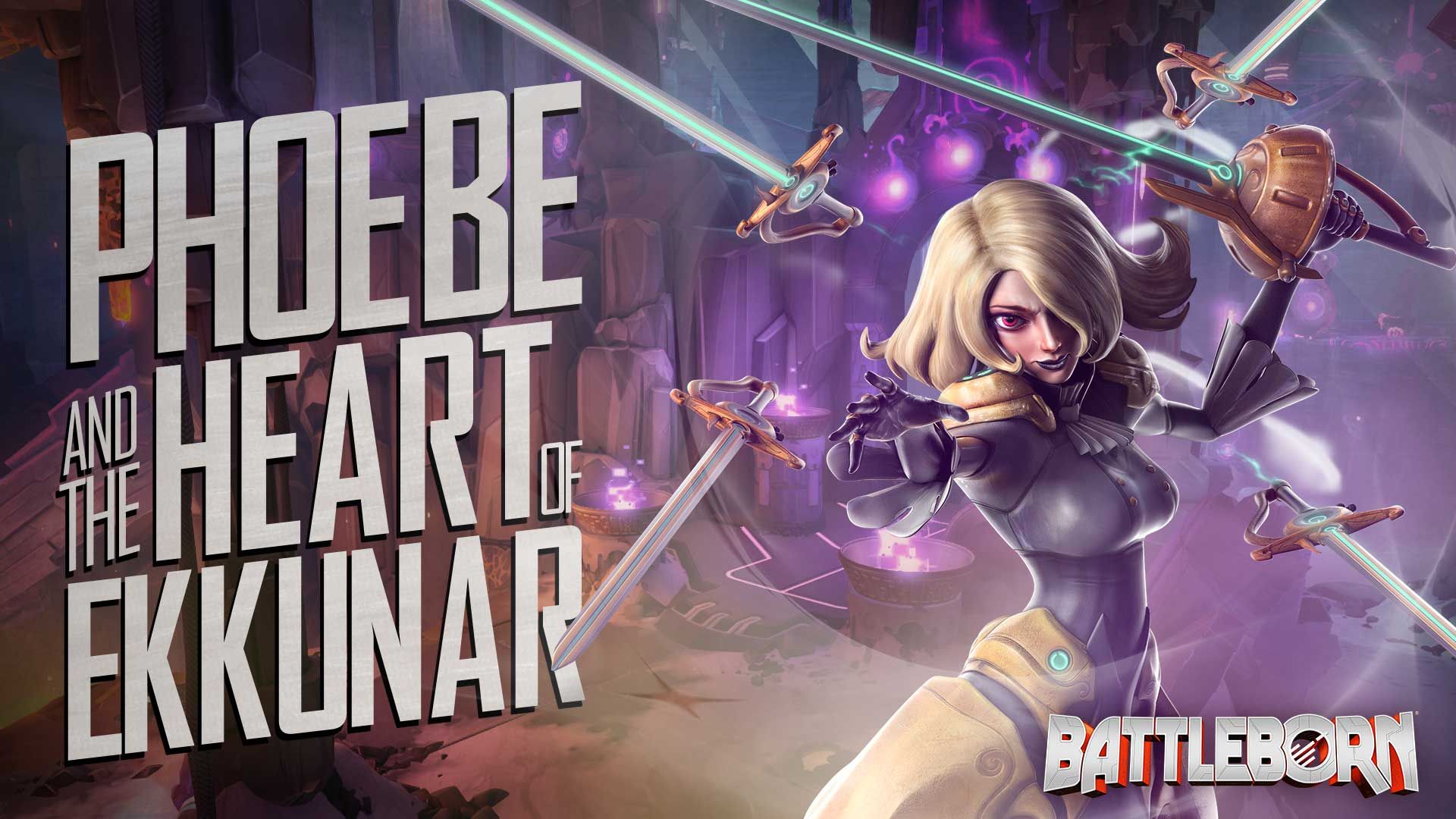 DLC 5 STORY OPERATION
Why would the Battleborn venture into dangerous Aztanti ruins? FOR SCIENCE! Phoebe and her crew set off to Ekkunar to investigate what exactly is keeping this shattered planet together. What they find creates more questions than answers. Join the Battleborn in unlocking the mysteries of the Varelsi, the ancient Aztanti and the place beyond the portals in the fifth DLC Story Operation “Phoebe and the Heart of Ekkunar.”


Learn more about “Phoebe and the Heart of Ekkunar” here[battleborn.com]

The Battleborn Reddit community is at it again - Battleborn Day makes a triumphant return this weekend! Get the details in the Battleplan[forums.gearboxsoftware.com] along with news on DLC 5 and new lore.