Almost two years have passed since the beginning of our work on the GGPO rollback netcode update. We are very grateful for your warm reception on each update. Recently, we pushed our final update: a complete rewrite of the matchmaking, to fix unstabilities and bring new features to the online modes.

We would like to call upon you one final time, GGXXACPR fans. Steam Awards 2021 are almost over, but there's still time. We hope that you have enjoyed all these updates and that you feel they have improved your game experience. If you think our work on Guilty Gear XX Accent Core Plus R is worthy of the "Labor Of Love" award, please tick that box up there!

Thank you, and see you online! 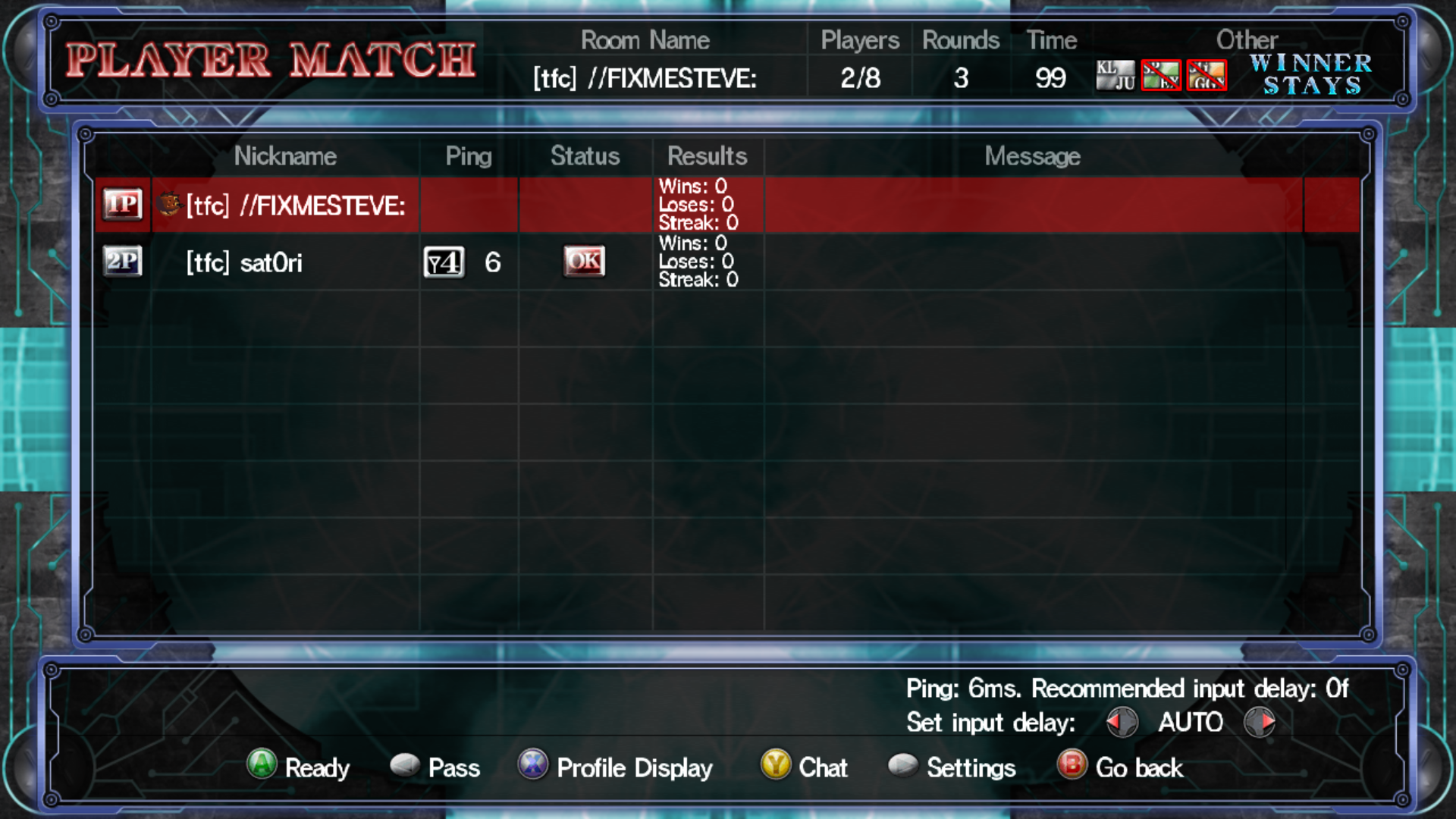 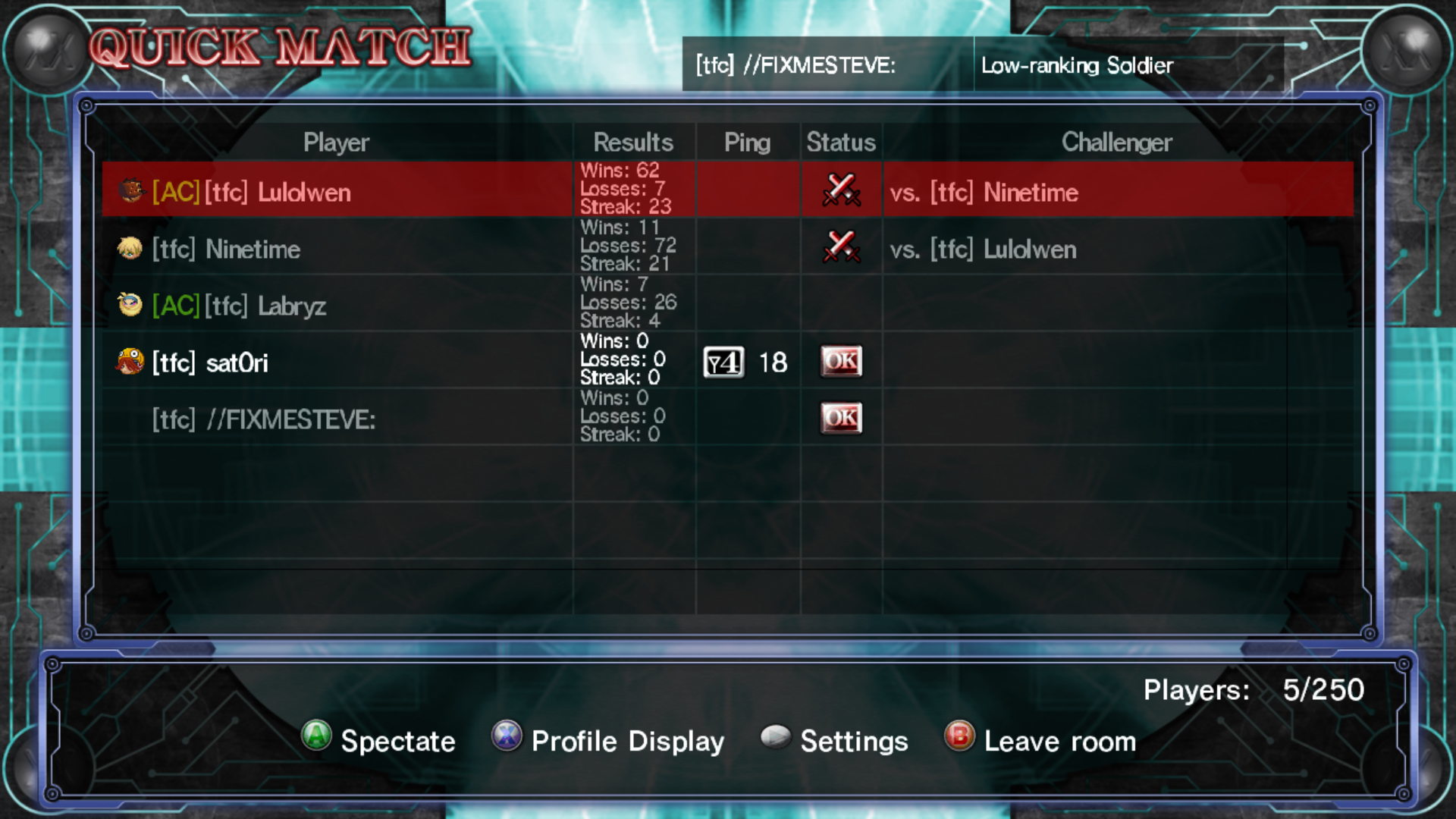 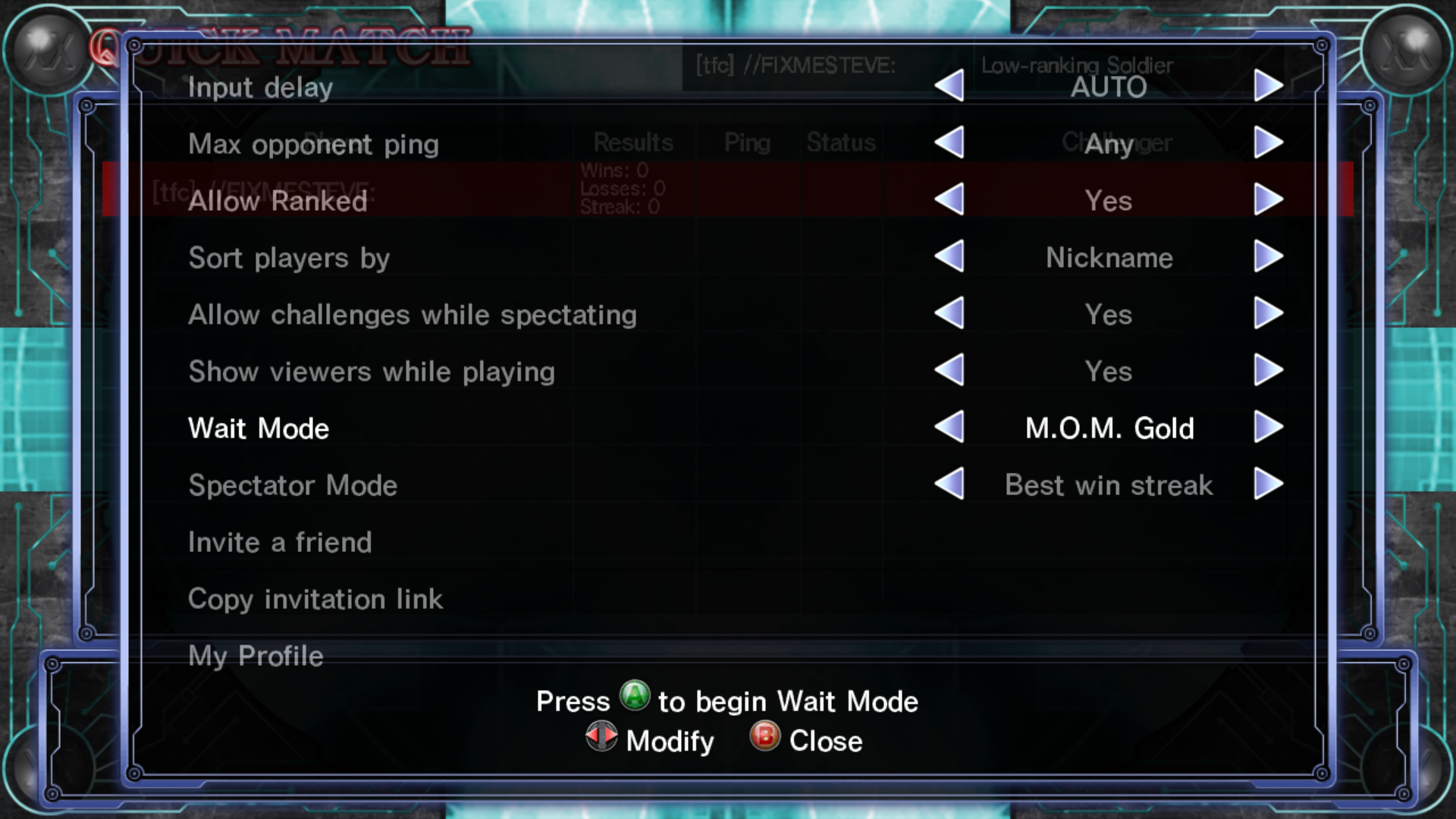 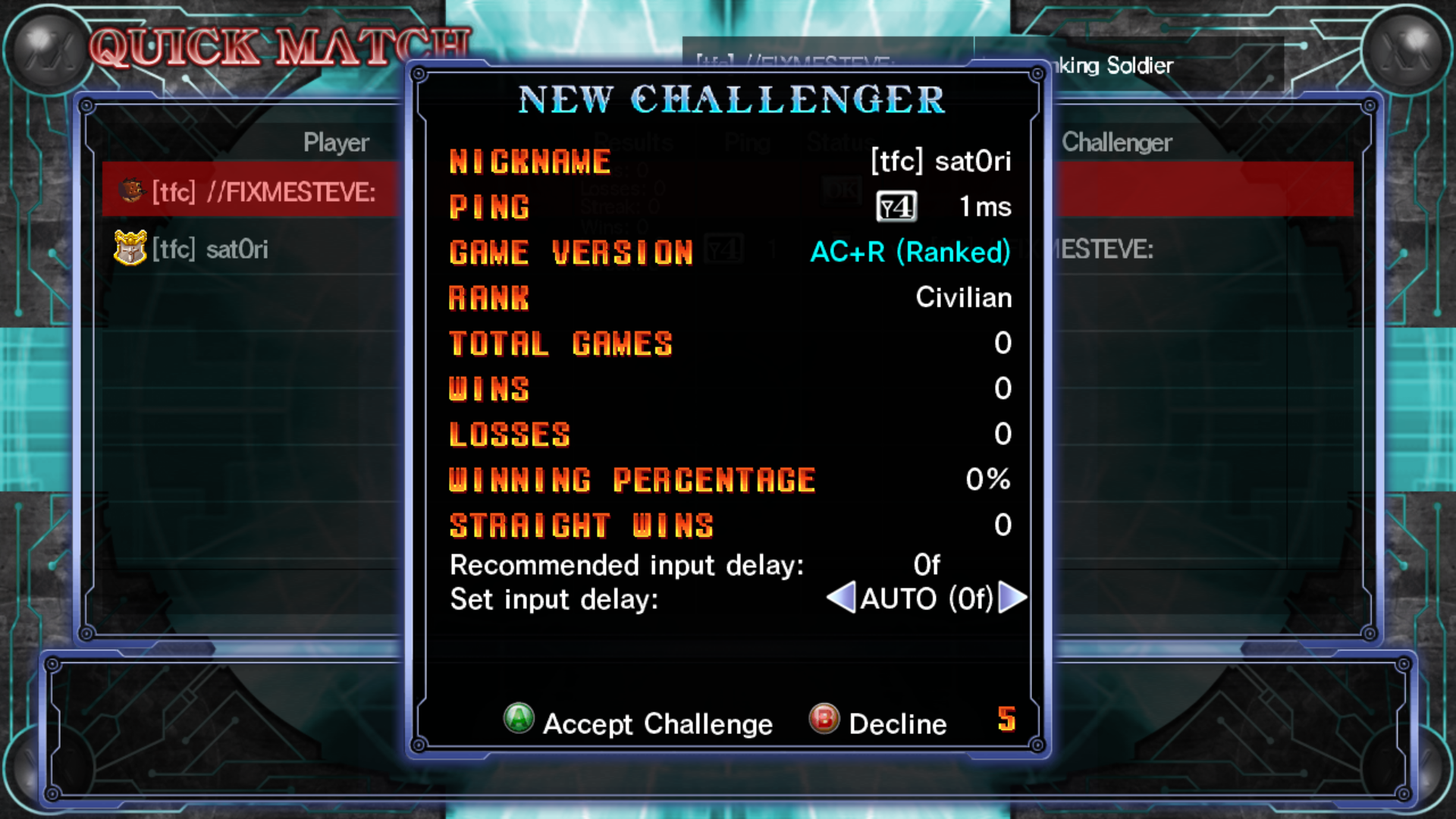 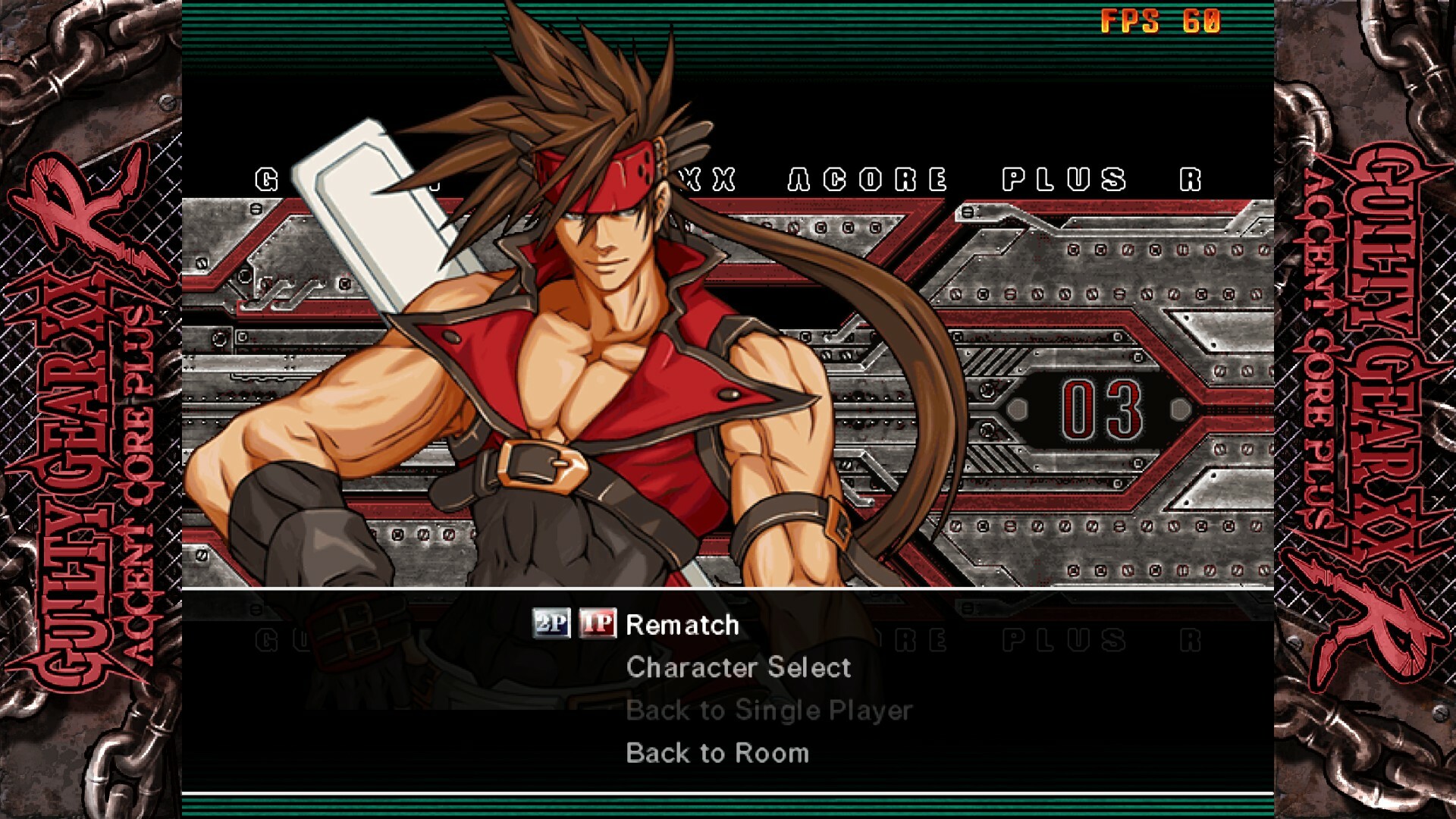 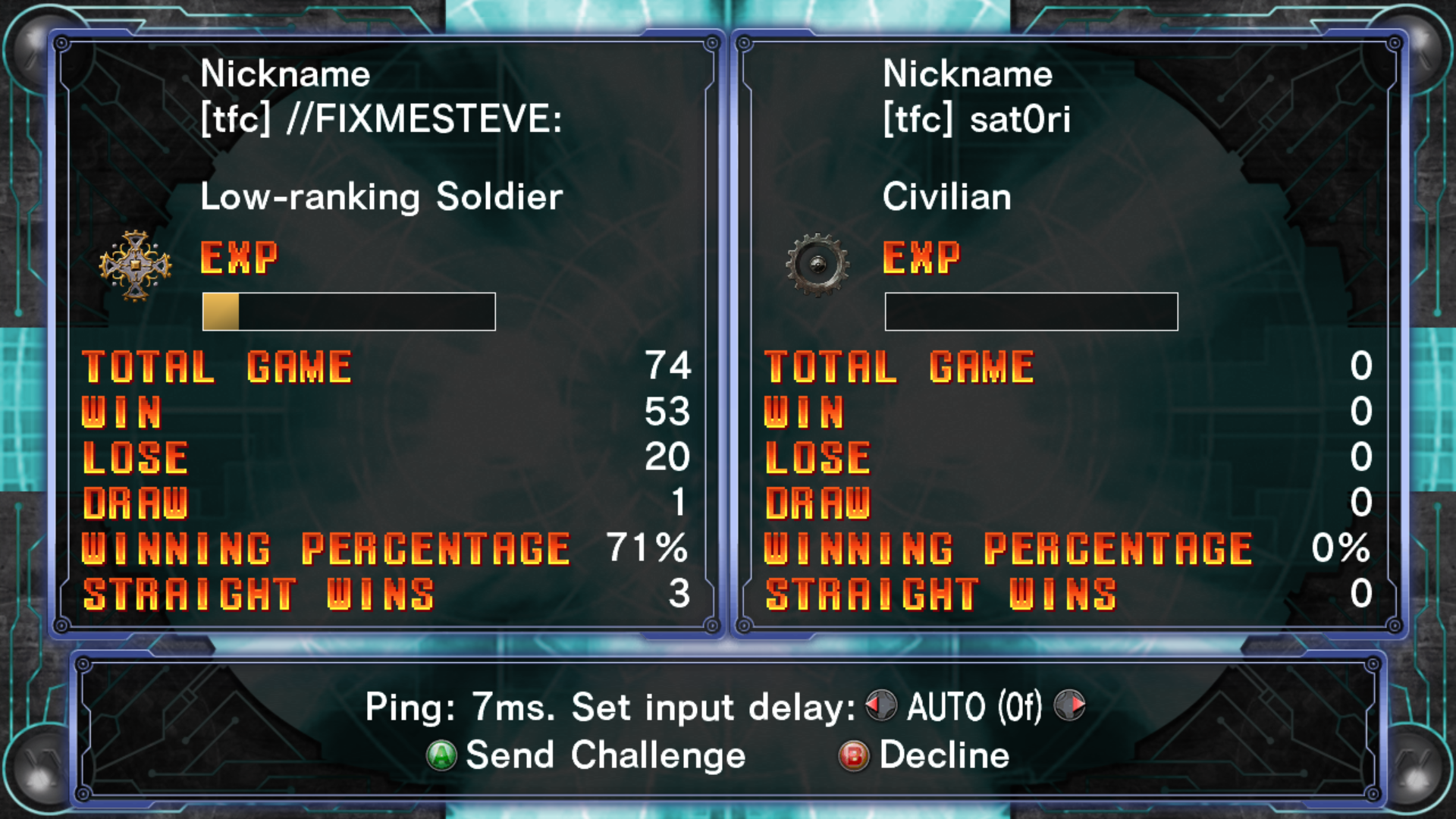 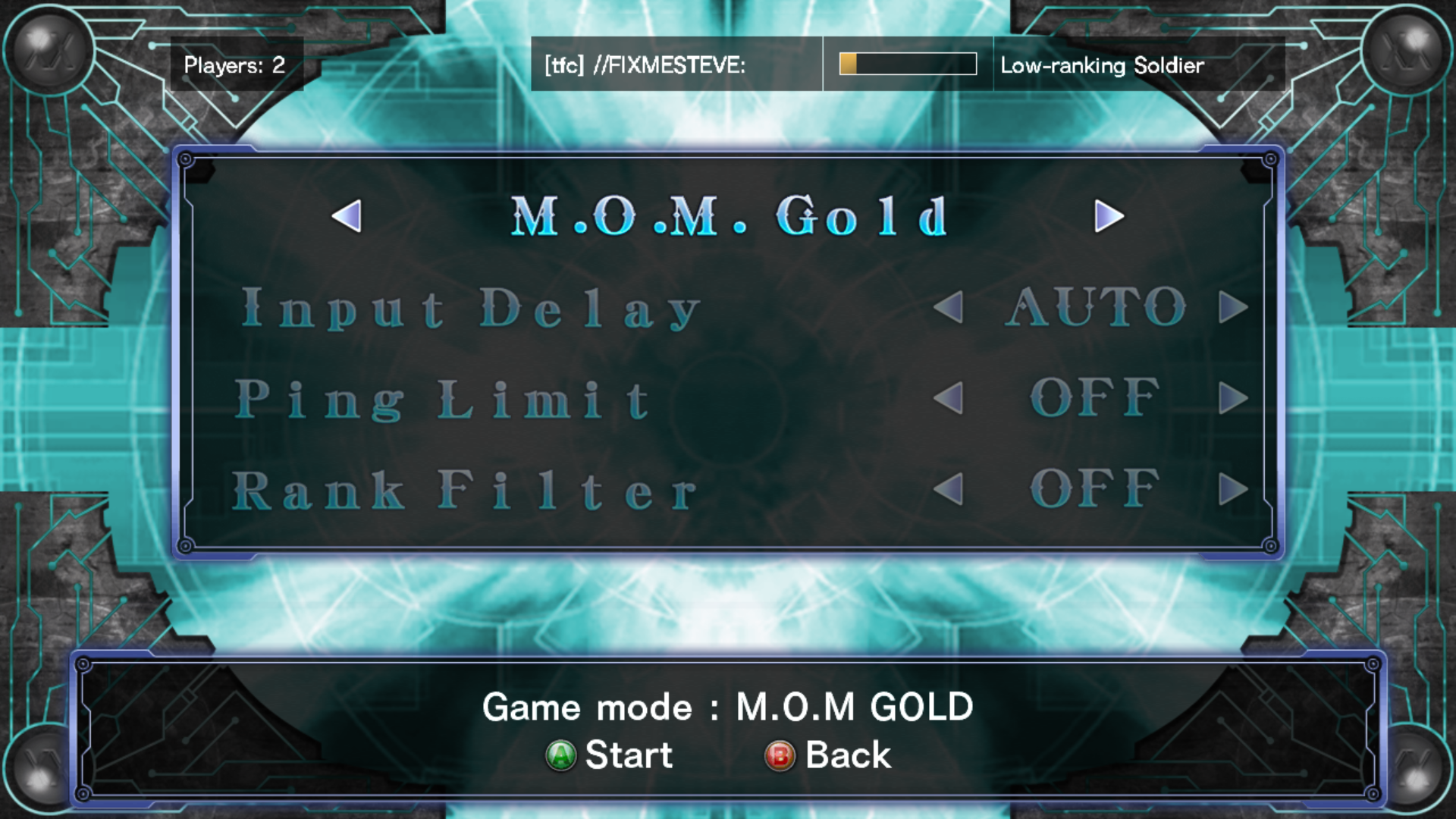 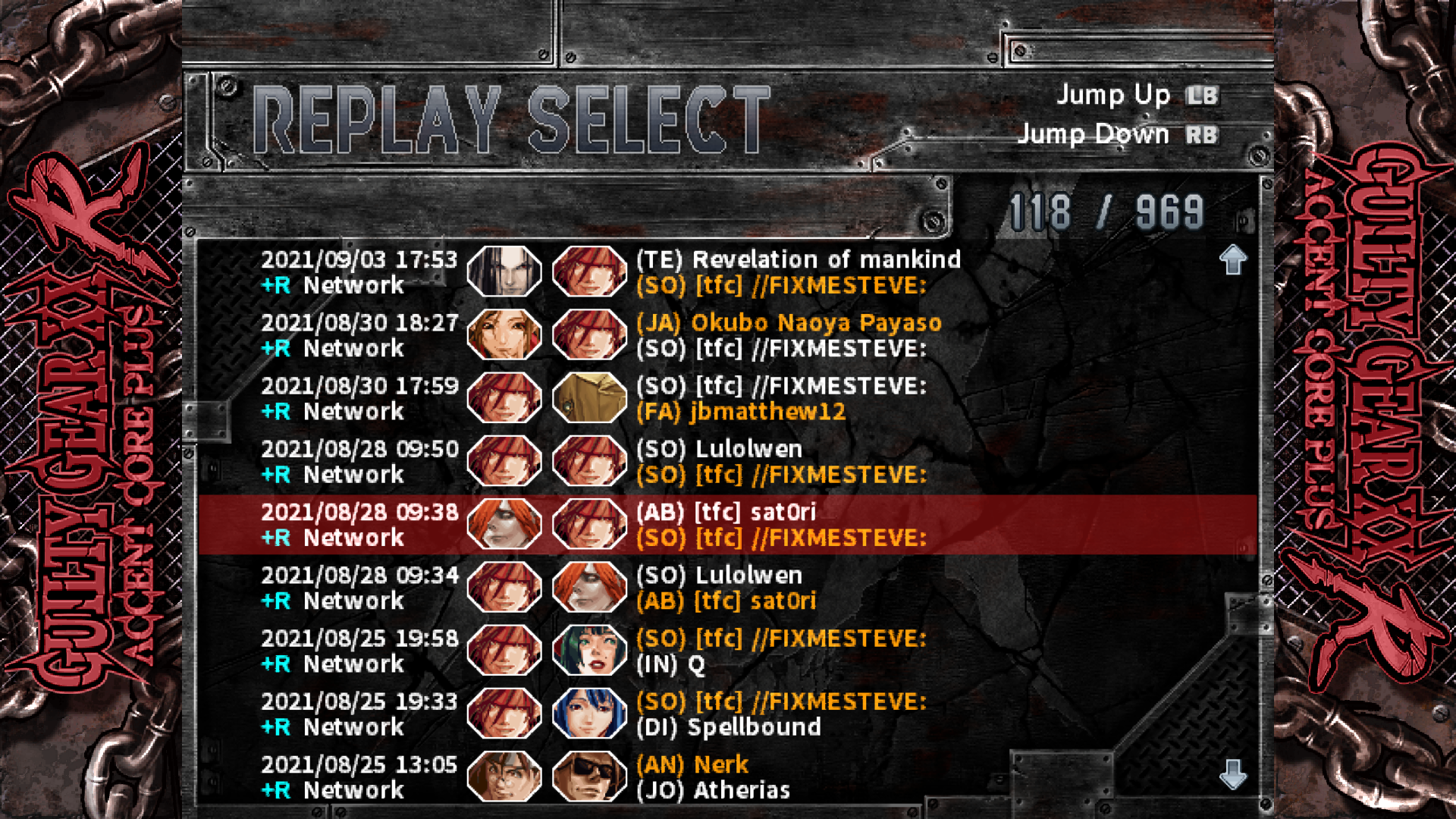 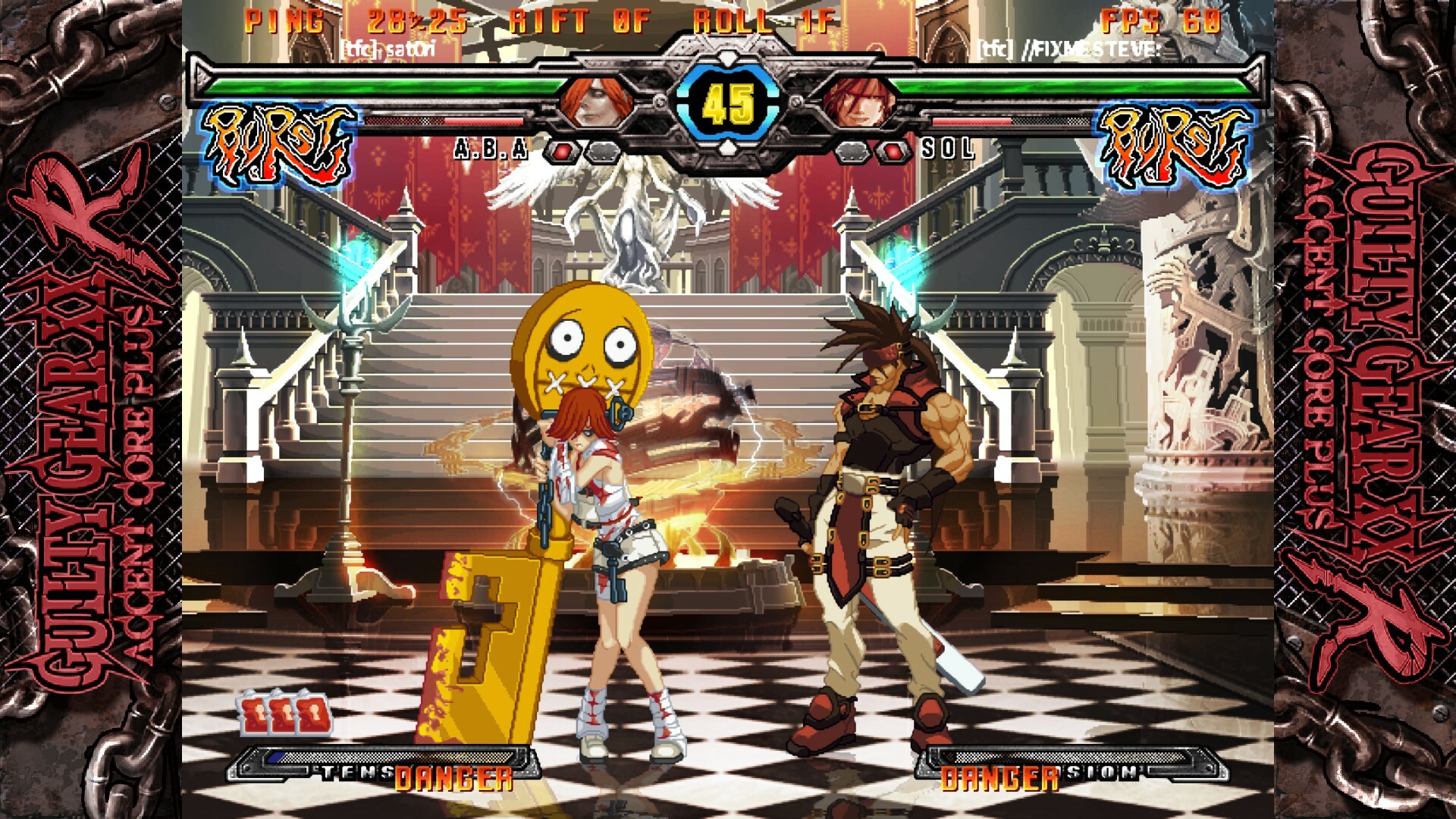 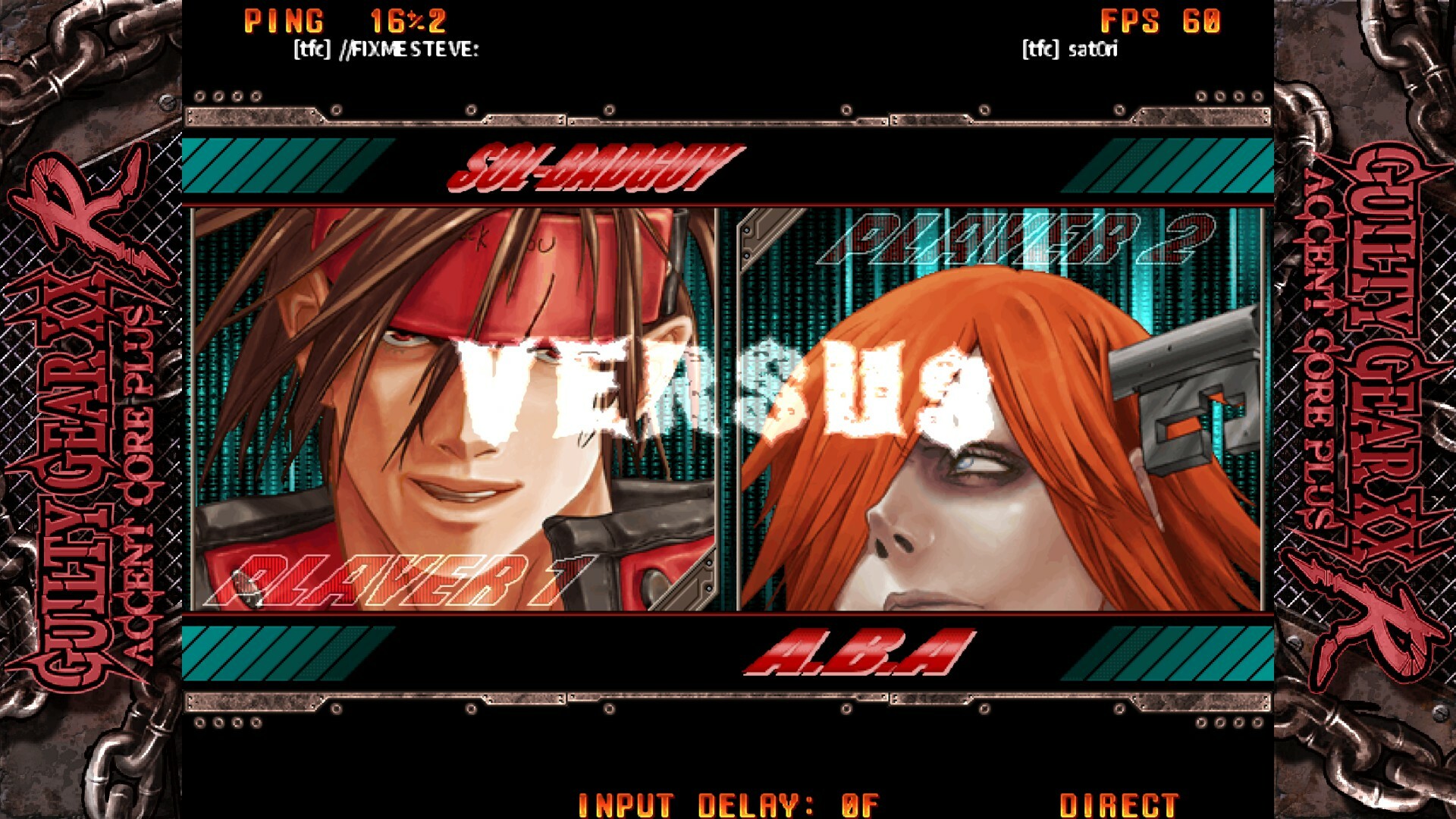 GUILTY GEAR XX ACCENT CORE PLUS R
507
46
Matchmaking V2 Public Testing invitation (Round 2)
Aug 24, 2021
Hello GGXXACPR fans, this is Team French CaliBurst again. We are opening the publictest branch one last time to test the remaining fixes and improvements in the matchmaking implementation.

The test begins right now and will remain open until the implementation is considered stable. After that, it's going to replace the default implementation.

We will be waiting for your feedback here: https://steamcommunity.com/app/348550/discussions/1/

How can I participate in the public test?
Please follow this procedure to participate in this public test:
* Right click the game in your Steam library
* Click "Properties..."
* Go to "Betas" and select "publictest - GGPOupdatetest". If you don’t see the branch, please restart Steam and try again.
* Close the properties menu
* The game should automatically update. After the update has ended, you’re set to go!

Patch 23.11.2021
- (Ranked) Fixed: In Player Match > Quick Match, do not reset ranked result if it wasn't yet shown to the player.
- (Network) New Challenger column in Player Quick Match, which displays the opponent's name of players currently in battle, much like in Player Rooms.
- (Network) In Player Rooms and Player Quick Match, you will now warp to the end of the player list if you press up while positioned at the beginning, and vice-versa.
- (Translation) FInal translation update.
- (Credits) Updated credits

Patch 13.11.2021
- (Network) Fix: disconnects or desyncs are no longer treated as a draw.
- (Network) On room search results, ping will no longer be polled and shown for the large Quick Match rooms.
- (Replay) Added winner side to replay metadata.
- (Replay) Fixed longer black screen loading time when accessing Replay Select menu since 11.11.2021 Replay Select UI update. Metadata loading for the new UI is now done in the background.

Patch 07.11.2021
- Prevent glitchy game state when accepting a room invite multiple times in a short period of time
- Fixed consecutive invites sometimes not working after the game was started via invite link
- Fixed black menu background after being disconnected or kicked from a room
- In Winner Stays rooms, 'spectate until your turn' notification is no longer shown when the player is alone
- (GGPO) Modification that allows what we call "small rift correction". It should fix rare cases when, for example, matches with 200ms ping feel like 260ms ping.

Patch 14.10.2021
- (General) Restored Arc System Works' logo on bootup, which was unintentionally disabled in November 2020.
- (General) Added translations (made by the GGXXACPR community) for the new strings of Matchmaking V2, for the following languages: Italian, German, Portuguese, Spanish, Korean. Please note that translation is still a work in progress.
- (Network) "Kick" function from stable branch has been restored. In custom rooms, Profile Display now has Remove option available to room creators.
- (Network) Pause menu with Command List has been restored.
- (Network) The game's icon in the taskbar now lights up when you are challenged in Free For All, or when it's your turn in Winner Stays.
- (Network) In Wait Mode, inputs are now ignored for a short time after Challenge Modal appears. This will prevent accidental Accept/Decline while you're pressing buttons in singleplayer.
- (Network) In Winner Stays rooms, Wait Mode is no longer interrupted when all the other players are spectators.
- (Network) In Winner Stays rooms, added a notification after player is forced to exit Wait Mode when it's their turn to play.
- (Network) Fixed rift correction sometimes overshooting at the beginning of the match.
- (Network) Wait Mode: disabled MOM/Survival achievements for EX/GG/SP characters.
- (Network) MOM/Survival score is now preserved after interruption.
- (Network) On post-match menu, icons to signify both sides' selection are now drawn (P1 and P2).
- (Network) Some optimizations for underperforming PCs.
- (Performance Test) The amount of frame draws that had to be skipped is now shown at the result screen.
- (Ranked) Show an explanation message when a repeated ranked challenge cannot be sent.
- (Ranked) Wait Mode: when Rank Filter is enabled, auto-matcher no longer picks opponents with lower ranks that give negative EXP even when result is 2-1 in your favor.
- (Steam Integration) Fixed missing player names in Steam's 'View Game Info' modal.
- (Stability) Fixed many issues with the opening movie playback.
- (Stability) Fixed a possible game freeze after returning from Alt+Tab in fullscreen mode.
- (Stability) Fixed some crashes.

Patch 24.09.2021
- New feature: when FPS is enabled, a performance warning ('!' sign) can be drawn near RIFT/ROLL indicators. Performance warning is issued if rollback processing takes much longer than expected, or if the game has to skip drawing frames in order to keep 60 frames being equal to 1 second. If you see the performance warning often, it indicates that your PC is underperforming or too slow.
- Fixed a couple of crashes.
- EX mode is correctly disabled for Kliff & Justice.
- Previous character select data is reset after leaving Network menu.
- Fixed connectivity problems at the beginning of matches. As a result, challenge can only be sent if the opponent has ping information ready.
- Desync is now correctly treated as a disconnect and post-match menu with rematch is not presented.
- Fixed ranked menu breaking when an invite is accepted.
- Fixed immediate accept or decline in wait mode if a button is held before challenge modal appears.
- Some minor performance improvements.

Patch 03.09.2021
- Fixed: Autospectate disables itself
- Relabeled 'Autospectate Mode' as 'Spectator-only Mode'
- Fix AC ABA keygrab framedata
- When explicitly sending a challenge, remove the opponent from decline list
- Stop trying to rematch if an opponent is not in a state that allows it
- Fix possible crash when determining winner side after a match
- Preserve side and game version after choosing Character Select in post-match menu
- Adjusted the conditions that allow to skip battle intro: frame advantage (RIFT) must be <= 10f for 30f (was: for 1f)
- Fixed: In Winner Stays, a player would not stop spectating when it was their turn to play.
- Fixed: Input guide is displayed incorrectly when language is set to Japanese
- Don't restore previously selected Kliff or Justice if they're disabled in current game mode
- Fixed some typos
- Prevented a possible spin-lock during rematch
- Fix crashes when player is unexpectedly kicked out of the room by Steam

Patch 29.08.2021
- Fixed connection issues when one side is experiencing high packet loss

Patch 28.08.2021
- Fixed player data corruption that happens when the last rank is reached

Patch 25.08.2021
- Fixed poor performance for matches that are initiated during Wait Mode
- Fixed possible crash when the opponent disconnects from room right after rematch
- To players experiencing frequent disconnects (with messages CONNECTING-SYNCHRONIZING-DISCONNECTED): connection settings have been modified, please check if this fixes your issue.

Settings menu inside a room: 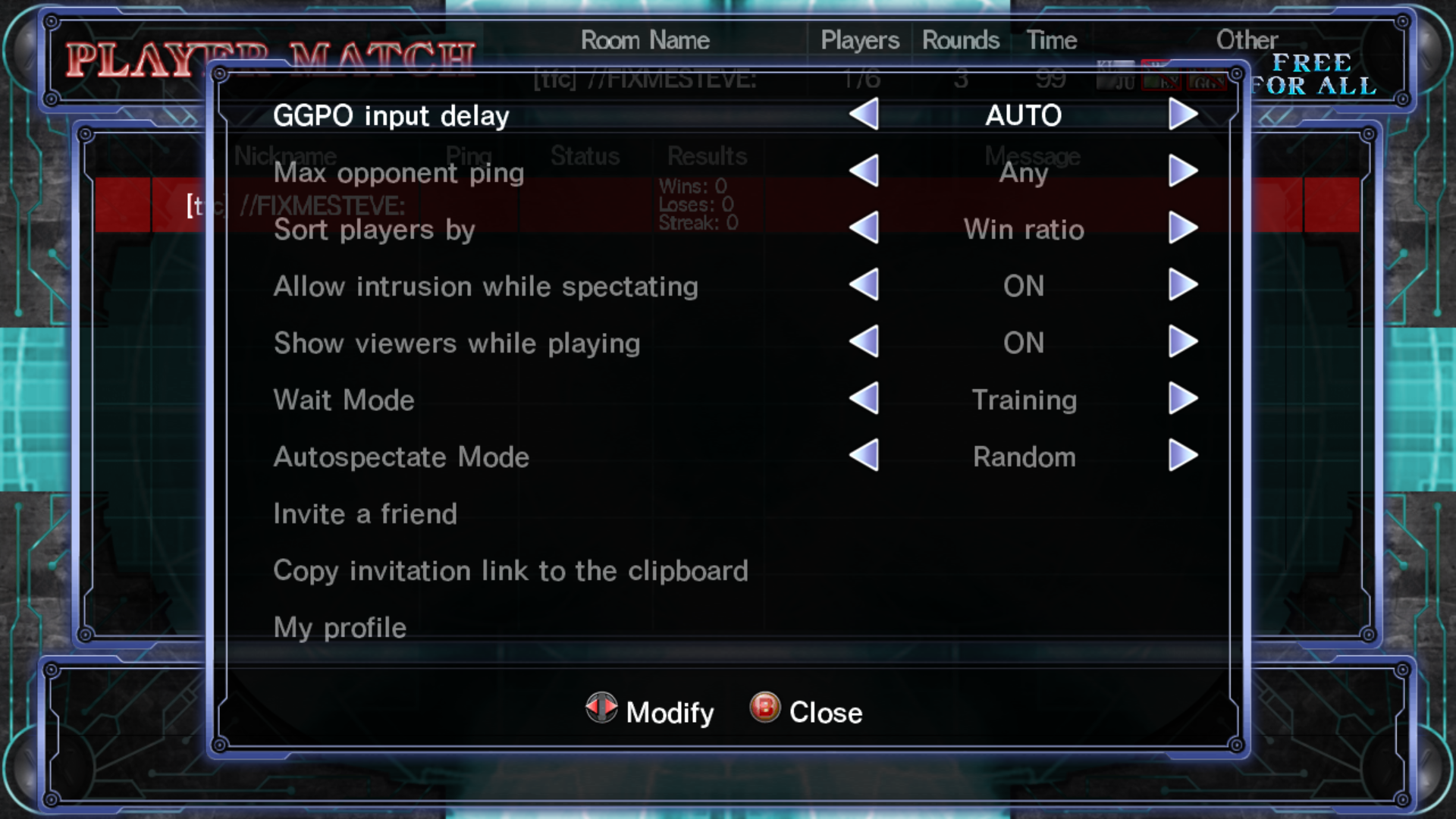 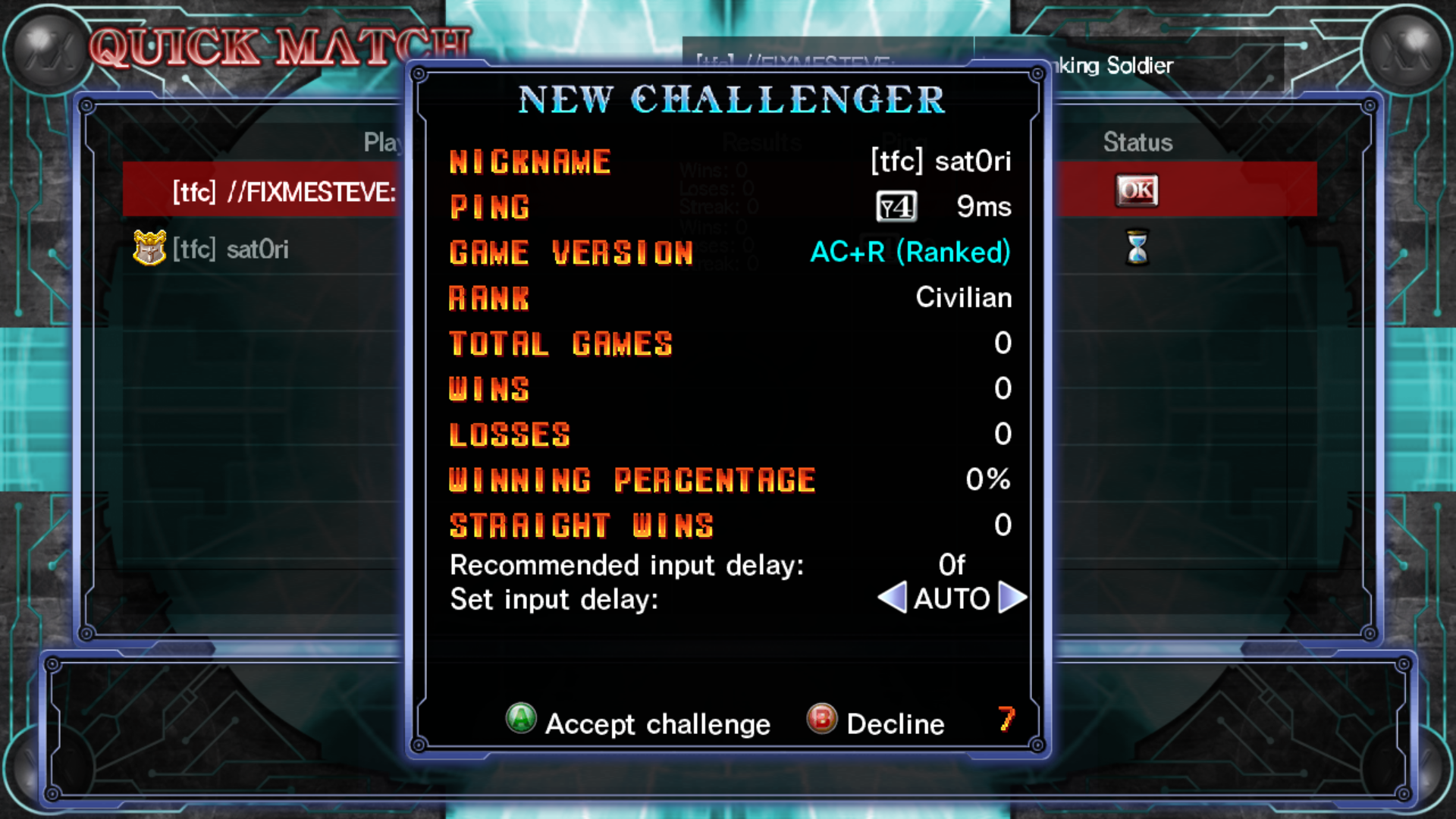 Challenge modal (while waiting in game): 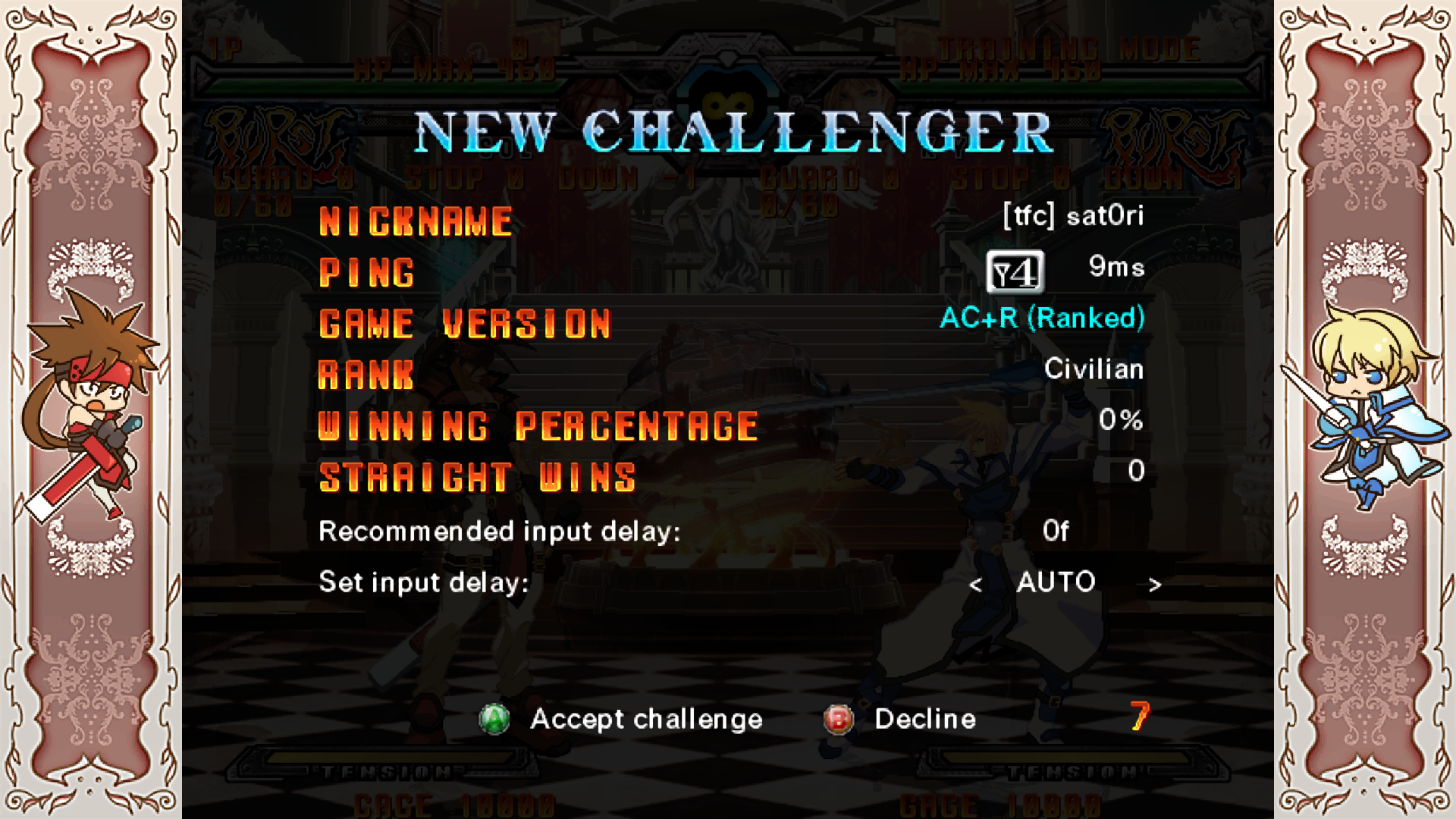 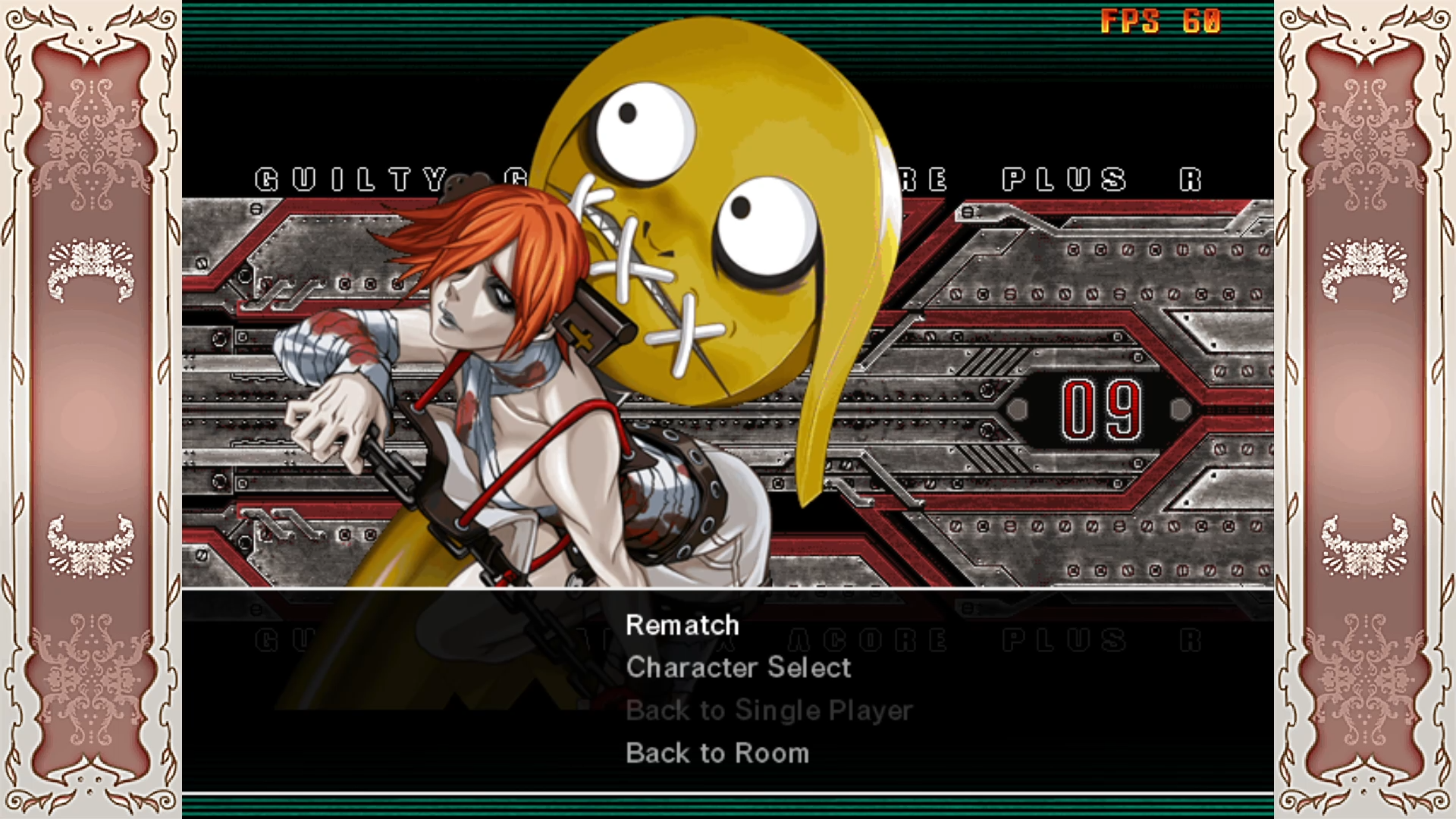 Restart your Steam client to make sure you receive the update.
This update is for "publictest" beta only.
See the following announcement for more information on the ongoing public test: https://store.steampowered.com/news/app/348550/view/3105772592523126191

How can I participate in the public test?
Please follow this procedure to participate in this public test:
* Right click the game in your Steam library
* Click "Properties..."
* Go to "Betas" and select "publictest - GGPOupdatetest". Please note that the branch will be only visible when the public testing starts (Friday May 7th 2021 00:00). If testing has started and you still don’t see the branch, please restart Steam and try again.
* Close the properties menu
* The game should automatically update. After the update has ended, you’re set to go!

All these changes are still work-in-progress, the UI is not complete yet and some features are missing at the moment.
Please give us feedback regarding the stability of the new rooms and their new UI in the public test reporting forum: https://steamcommunity.com/app/348550/discussions/1/

*Please note that Ranked Match has been disabled for this test. Also, some features are not available: Team VS mode, persistent win/loss stats, chat messages, kicking, spectator-only mode, and rotation.

The new features available for testing are listed below:
New Player Quick Match 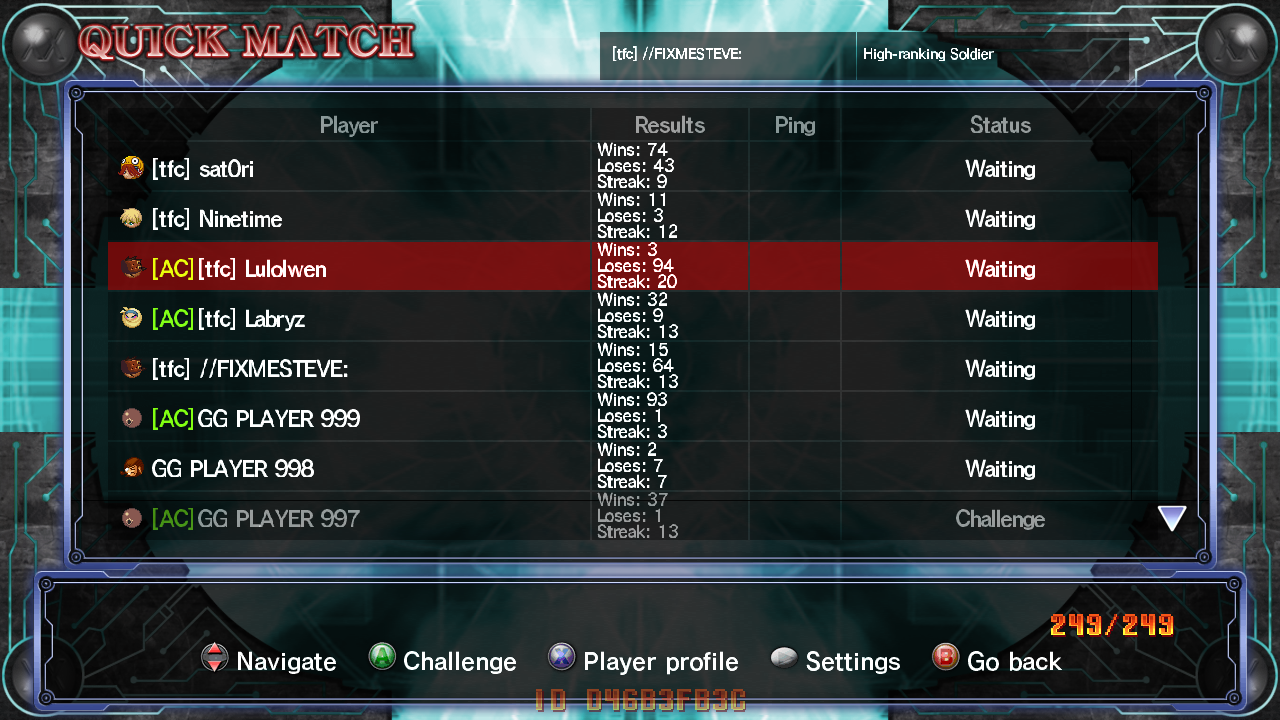 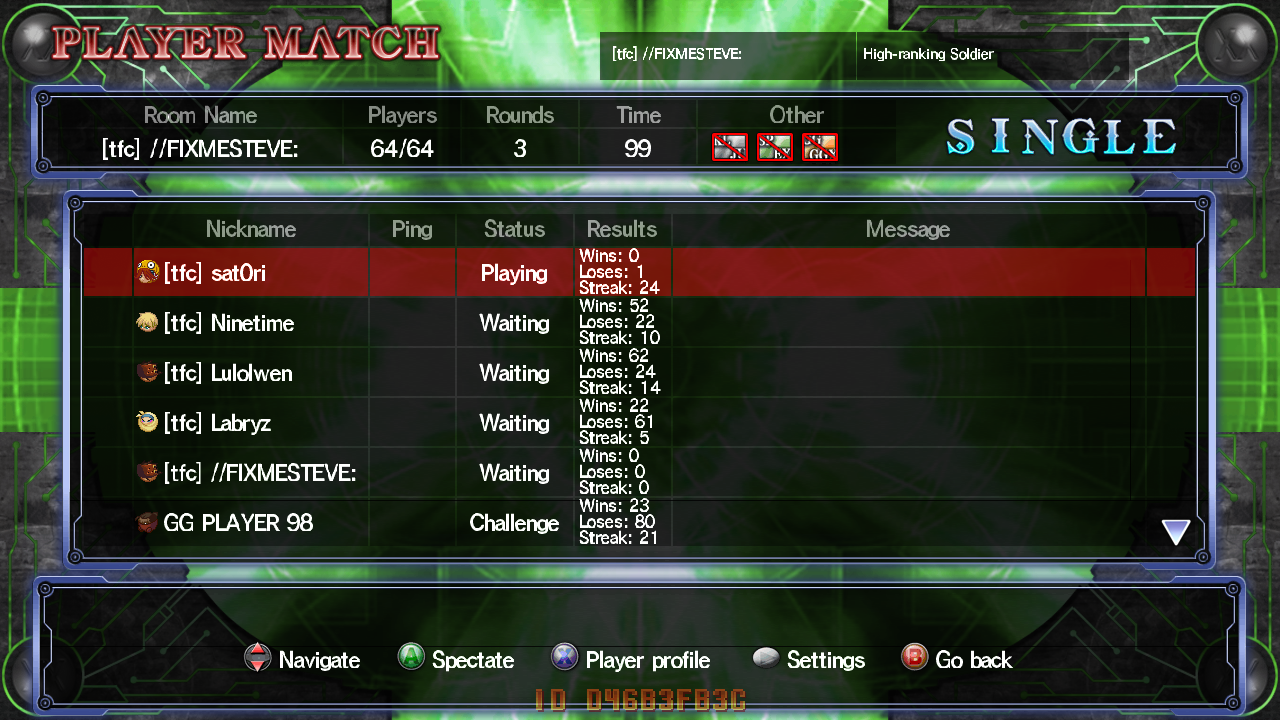 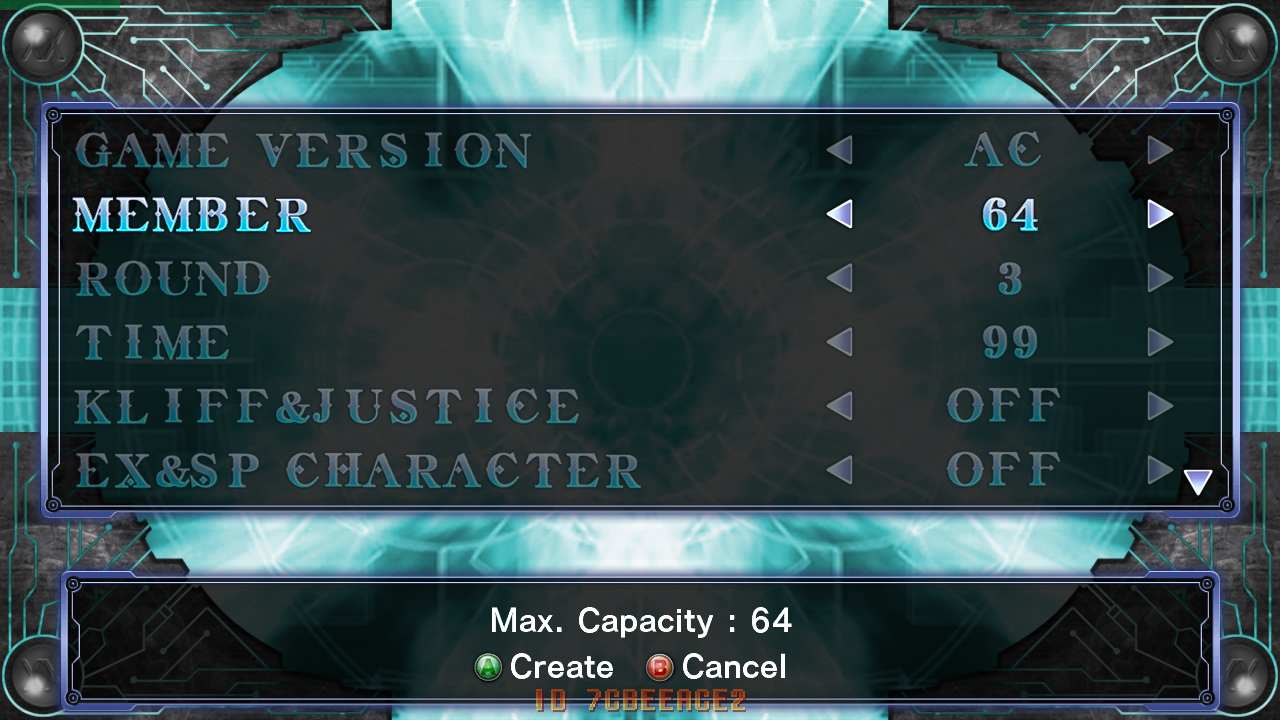 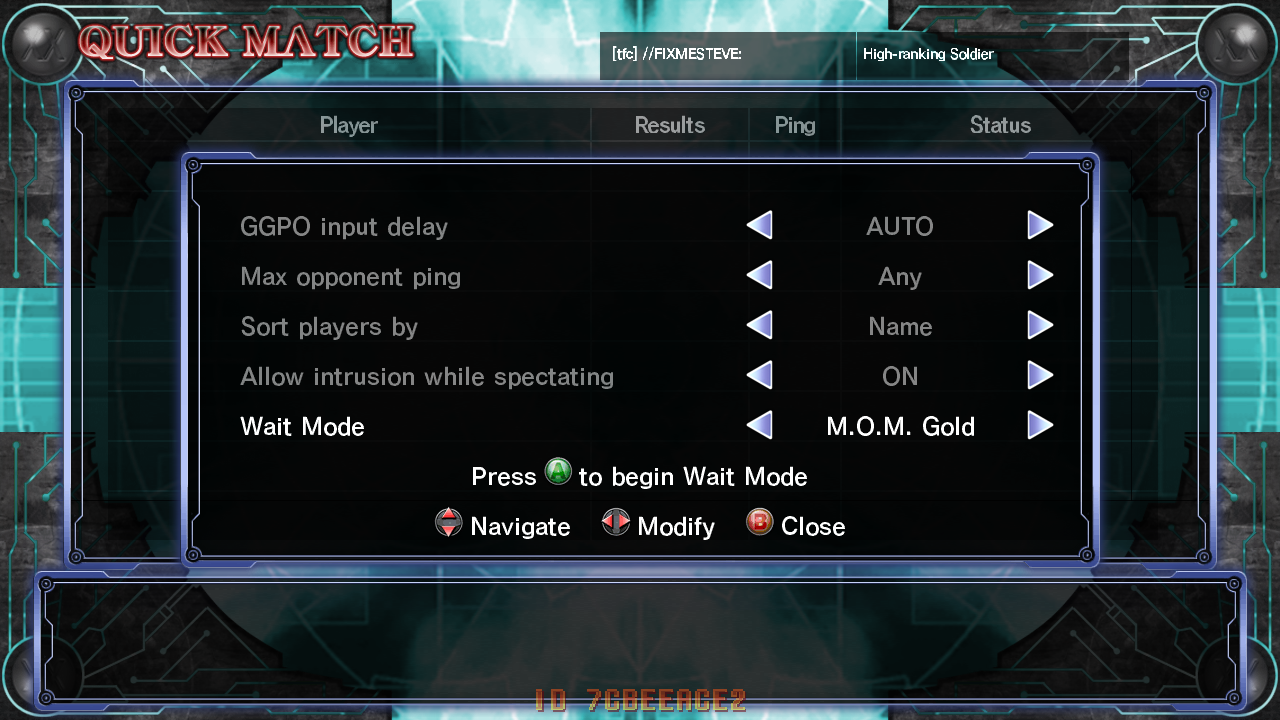 Fixes and improvements
Fixed bugs in training mode submenus
Fixes for automatic memory playback in training mode
Other fixes and improvements
How can I participate in the public test?
Please follow this procedure to participate in this public test:
* Right click the game in your Steam library
* Click "Properties..."
* Go to "Betas" and select "publictest - GGPOupdatetest". Please note that the branch will be only visible when the public testing starts (Friday May 7th 2021 00:00). If testing has started and you still don’t see the branch, please restart Steam and try again.
* Close the properties menu
* The game should automatically update. After the update has ended, you’re set to go!

GUILTY GEAR XX ACCENT CORE PLUS R
223
29
March 27 2021 Update Notes
Mar 27, 2021
Changes
* In the previous update we had forced VSync Off in Network mode, we have reverted this change in this update.
* Allowed binding more keyboard keys.
* Save new training mode and replay settings to Savedata.dat.

Bugfixes
* Possible fix for a crash that occurs when the codecs incorrectly identify the opening movie.
* Fixed a possible crash when training dummy guard is set to "random".
* Fixed a desync caused by I-No's Megalomania.
* Fixed P2 dummy not guarding during memory playback for P1 (a pre-existing bug).
* Fixed a crash when creating/entering a player room with Korean translation. 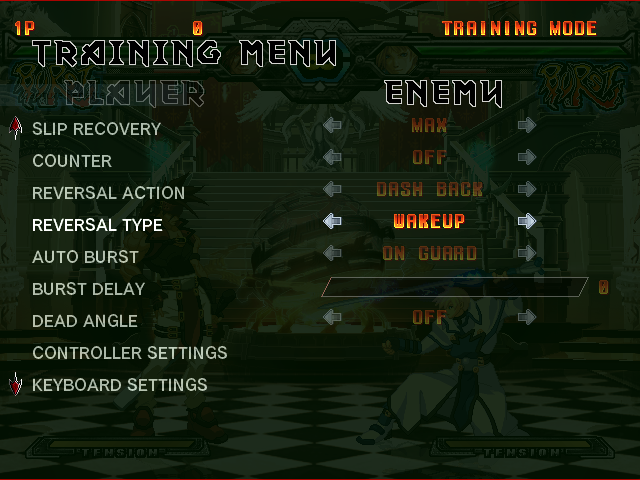 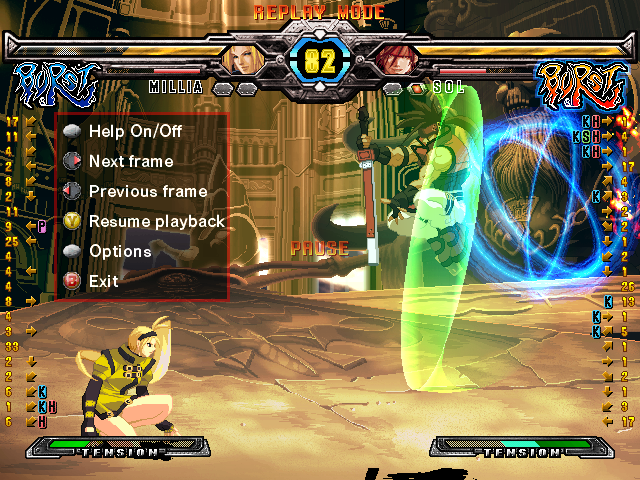 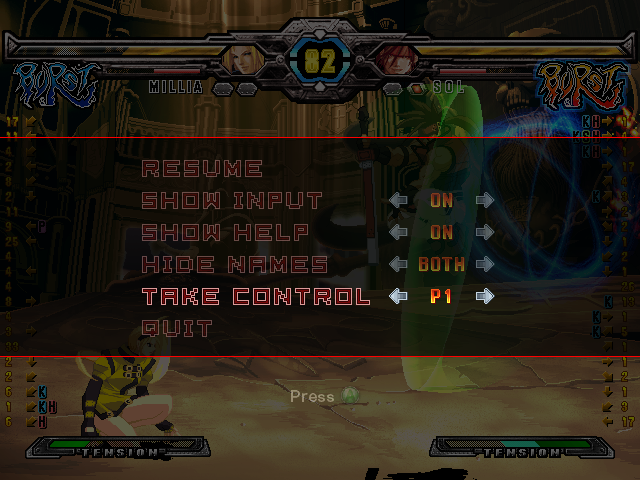 When using Lenient Input, keyboard and hitbox players will notice an improvement, as fast inputs (<1f) are no longer ignored. Only half-circles are affected by this change. This setting is applied online too!
Other new features
Bugfixes:
Optimizations:
Tweaks:

GUILTY GEAR XX ACCENT CORE PLUS R
665
62
GGPO Update officially implemented!!
Dec 22, 2020
The much awaited GGPO has now been fully implemented to the release version of the game! Players do not need to switch to the Public Testing beta option any more.

Added GGPO:
* Network mode now uses GGPO for online play!
* GGPO input delay can be set between 0 and 4 frames before battle by pressing left/right in a player room. A recommended delay depending on ping is displayed to the user
(0-100ms: 0f, 101-180ms: 1f, >180ms: 2f). This setting is saved.
* During a network game, ping and jitter information are displayed in the upper-right corner.

Added player rooms:
* Network mode now supports player rooms of up to six players!
* Anyone not playing will spectate the current match.

Added replay support:
* A replay gallery is now accessible from the main menu! Single and team, offline and online games replays are automatically recorded after each match.
* Replays are saved in %USERPROFILE%\Documents\ARC SYSTEM WORKS\GGXXAC\Replays\, and can be shared with other users.

Many more minor bug fixes, Quality of Life improvements and tweaks.
On a side note, public testing is still on going with a tester-version with log tracking and other tools at the public testing beta.