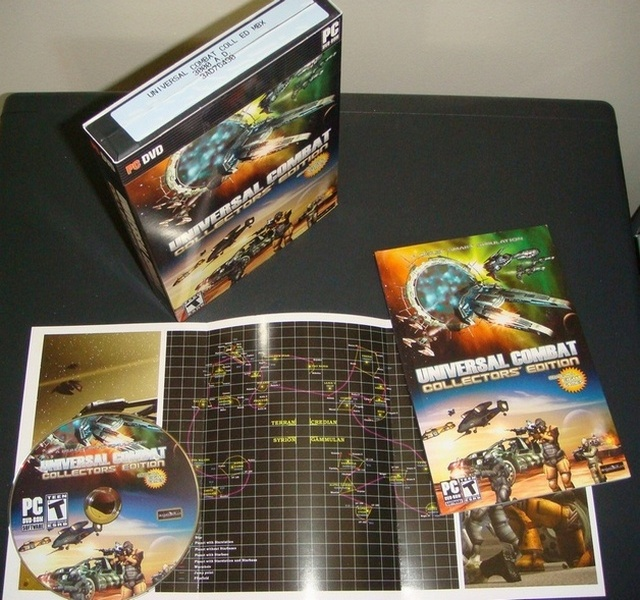 Some people have been asking for multiplayer in the Universal Combat suite of games released here on Steam. Here's an explainer.

As I mentioned in the forums, multiplayer was implemented in the original Universal Combat (2004) and up to the first Collectors Edition (2007). Maintenance and server backend issues, coupled with new features and updates made the multiplayer version lag behind the single-player version with each new point release.

Unlike the All Aspects series, the Universal Combat series - which use different core engines - were never developed with multiplayer in mind because they were derived off the original Battlecruiser series. Thus, having to add multiplayer to a single-player game was fraught with all the usual challenges that such an endeavor entails. So, in the long run, having to sync the multiplayer with single-player features, bug fixes etc. was an on-going time-wasting challenge that eventually became insurmountable.

And with that, multiplayer was disabled in the 2.0 release back in 2009.

Thereafter, my plan was to spend some time fully developing an updated multiplayer component as a DLC to the on-going expansion and improvement of the Universal Combat 3.0 series; similar to The Lyrius Conflict DLC which expands and improves on various parts of the core engine.

Though I haven't been able to spend as much time on 3.0 as I would like to, due to other projects and the fact that I ripped out a large swath of legacy UC code that I had always planned to re-write, I still plan to develop a multiplayer component. And the quickest way forward in this regard is to integrate the more advanced multiplayer engine from the All Aspects series to the UCCE 3.0 core as a separate DLC once I have completed and released the final version of the single-player The Lyrius Conflict DLC.

Until then, I have now added the original 2007 version of UCCE[3000ad.com] as a free game to the base game here on Steam. As it's not a separate game on Steam nor a DLC, you will have to manually install it - then add it to your Steam library manually. You can view the changelog here[3000ad.com].

Once you have this update, look in the Steam install folder for the UniversalCombatCE_10104_STM.exe file and run it. That's it!


DISCLAIMER
As a legacy title that no longer has updates, this release is unsupported.

The backend master server used for multiplayer server browsing has been off-line for many years now. So, you can only setup and join a multiplayer game using the command-line options and the console server build. See Section 13 of the included PDF manual for more info on this.

So there's a restoration project for BCM Gold underway. More details are in this forum thread

As you all know, the Battlecruiser and Universal Combat games[3000ad.com] spawned from them are a labor of love and which I have worked on for almost three decades now. With various games in the series being derived from a previous game version while using engines and features, over the years code bloat (if it ain't broke, don't touch it!) accumulated to an unmanageable degree. Over the years, I replaced or upgraded most of the legacy code - to the extent that as of this writing, very little of the original Battlecruiser game code exists. In fact, all of the original legacy code written in TASM and MASM have since been replaced with C/C++ versions. This has been an on-going process each time I dare look at this code base with more than a passing glance.

So few years back when I decided to do another game in the BC/UC series, I knew that starting from scratch simply wasn't in the cards because, financials aside, it would be an insurmountable task for the most part. That aside from the fact that I was overseeing the development of Alganon (which my team had taken over) as well as my next big - and what I believe to be my final - game Line Of Defense[lodgame.com].

The decision to branch UCCE 2.0 to create a 3.0 derivative[3000ad.com] was so that I didn't have to start from scratch. I felt that the best path forward was to use the underlying suite of game engines, while updating those with improvements, adding new content etc. And so with that plan I released that first 3.0 version in June 2015. Since that time, while cleaning up and removing legacy code, I was also improving on the engines which would later complete this version.

As this effort continued, the act of removing deprecated code - while breaking most everything that worked before - forced me to not only branch (see Public Test Builds) the code, but I also had to freeze certain updates in order to complete other critical work. For one thing, the graphics engine was still based on DirectX9 (which Microsoft deprecated years ago in tool builds). So in order to continue working on 3.0 in a WIN 10 world, I had to not only maintain a separate set of DX9 dev tools (DLLs etc), but I also had to fight back the urge to upgrade from Visual Studio 2010 on which the most recent versions were based. Trust me, developing a videogame in a VM environment isn't fun. Like at all.

One fateful morning last year after a particularly nightmarish debugging session, I made the decision to not only migrate to DX10, but also to move my platform dev for the game to VS 2017 (I recently moved to VS 2019). And just like that, the planned branch of 3.00.20.05 (which was to be released in March 2019) came to a grinding halt.

While all that was going on, a different dev fiasco[lodgame.com] which was playing out over at the LoD dev cabal, came to a head and created a massive distraction.

As time went on and my focus shifted between UCCE 3.0, LoD, Alganon, and life itself, I found myself spending less time on 3.0 because of the sheer amount of work that needed to be done - and which was the only way forward. Sure I could have branched that DX10 build, gone back to the last VM aware build and continued. But I didn't do that because I had a specific plan in mind - and I was determined to complete it as there was NO incentive or reason to go back. Why? Because I had vowed to never - ever - make another game as complex as the BC/UC series again. I'm approaching 60 and I would very much like to enjoy my looming retirement on smaller things after spending half a lifetime in game dev.

At the end of the day, when I finally finish the 3.0 suite of engines, and then start adding in the new content (models, terrain etc) which have been piling up after being created, it would be a massive benefit to the game in terms of visuals, performance, tech updates etc. And while the planned multiplayer is still going to be session based (but with a persistent server version like AAW/AOA games) and not an MMO, even at 64 players, I believe the effort would have been well worth it.

In conclusion, as I've said before, I simply don't yet have any hard dates for releasing a new 3.0x build. But it will be soon-ish. For those of you who have bought my games since the original 1996 Battlecruiser and followed my career, the mantra "It's ready when it's right. And right now it ain't ready" remains as it was back in the day.

Thanks for being patient. And don't worry, it's going to be worth the wait.

Remember my lengthy Summer 2018 update? Sure you do.

For the past year, in between working to re-launch and bring Alganon back online, working on the UE4 port for Line Of Defense[lodgame.com], dealing with some RL issues etc, I have also been working on the next MAJOR UCTLC build.

Since the last build release, so much has changed[3000ad.com] between the official (3.00.19) and PTB (3.00.20) versions that merging the two and releasing a single build, will be a version with a LOT of broken things in it.

And I don't want to keep having to maintain two branches.

So I decided to hold off until I had completed some critical code which I've been working on, while also replacing old content with new (some of which you have seen in the PTB versions). Once that's fully completed, I can then deprecate both the current public and test builds in favor of a new unified build, then continue with smaller updates going forward.

I know that it has been awhile since the last version, but it's for good reason. Development isn't always glorious and there's so much legacy code that I'm removing and/or replacing that I broke so many things it's not even funny. But the end result is that not only is it for the better, but it also provides a pathway to a future multiplayer DLC which (if you have been reading my posts) I am hoping to make once this DLC is released.

The development of this 3.0x engine kernel used in UCTLC is the last game of its kind that I will be developing. In fact, it's why I opted to use the DLC route to not only improve on key aspects of the Universal Combat IP, but also - hopefully - add multiplayer via another DLC at some point down the road.

It's going to be awhile before it's completed, but I think that you the fans will agree that it will be worth the wait.

Thanks for being patient.

No new content. I just decided to release my current DEV build so that it matches the PTB version at year end.

I had planned to push the latest 3.00.20.xx PTB ver to the main branch by year end; but I simply couldn't make it. This was primarily due to the massive amount of legacy planetary scene content that still needs to be replaced or the scenarios simply won't work.

If you're already using the 3.00.20.01 PTB ver, then you already know that ALL the legacy planetary scenes have been removed, and awaiting replacement (each one is MANUALLY BUILT) with the newer ones as seen in the new scenes already released with that build.

The main issue is that any IA or ACM scenario that requires those scenes, currently has problems. e.g. a unit that needs to be a specific location, will likely be in a completely different location due to the size and scale of the new scenes. So EACH scenario has to be scanned for planetary locations, then those locations have to be updated in the script, which then needs to be tested. So year, it's a massive amount of work. But once completed, it won't need to be messed with again. If you've seen the new scenes in the game, they you will agree that this update is well worth it. In fact, this build is the biggest one that I will do for this project.

Good news is that it's really close, so I hope to release the final build at some point in Q1/2019.