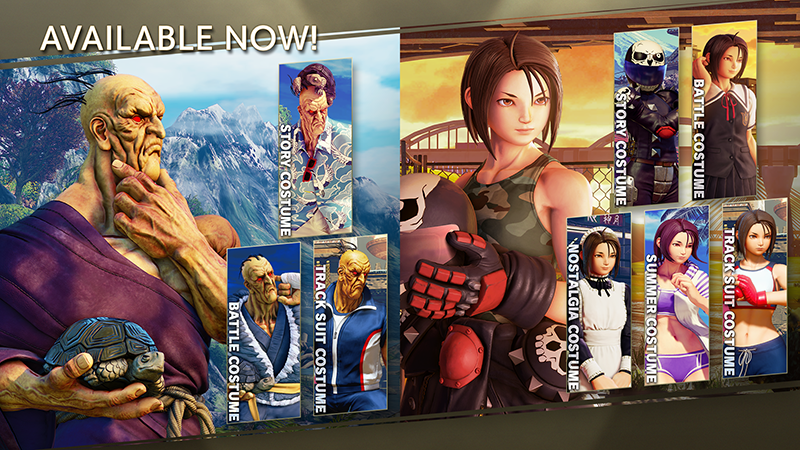 After a long journey away, Oro the wandering hermit from the Street Fighter III series returns in Street Fighter V ready to share his wit and wisdom with anyone who’s interested. Wearing a modest purple robe and brown rope belt, Oro swaps his pet turtle between his right and left hands as a way to challenge himself and maintain a balanced fighting style. Oro retains many of his original moves and adds a handful of new ones for Street Fighter V, making him an immensely powerful fighter for players to master.

Making her highly-anticipated Street Fighter debut, Akira Kazama began her fighting game career in the Rival Schools series, which began in 1997. In Street Fighter V, Akira dons her trademark black biker gear and prides herself on being the strong, silent type. That said, her playstyle speaks volumes when she’s at close range, but she’s also equipped with some long-distance moves that will leave her opponents thinking twice about straying too far. With plenty of new tricks up her biker gloves, Akira has been studying up and will be ready to school anyone who crosses her path.

Alongside the playable character Akira, “Rival Riverside” is a new Street Fighter V stage that has been reimagined from Akira’s Rival Schools days. Set near a familiar river and Akira’s high school, this stage takes place during sunset and includes several familiar faces from back in the day.

Oro and Akira can be acquired with the Street Fighter V Season 5 Character Pass or the Season 5 Premium Pass. Both characters can also be purchased separately for MSRP $5.99 or 100,000 Fight Money. Additionally, the Rival Riverside stage is available for $3.99 or 70,000 Fight Money.

Enjoy Oro, Akira, and the other amazing content included in Season 5 with the Premium Pass and Character Pass, available now! 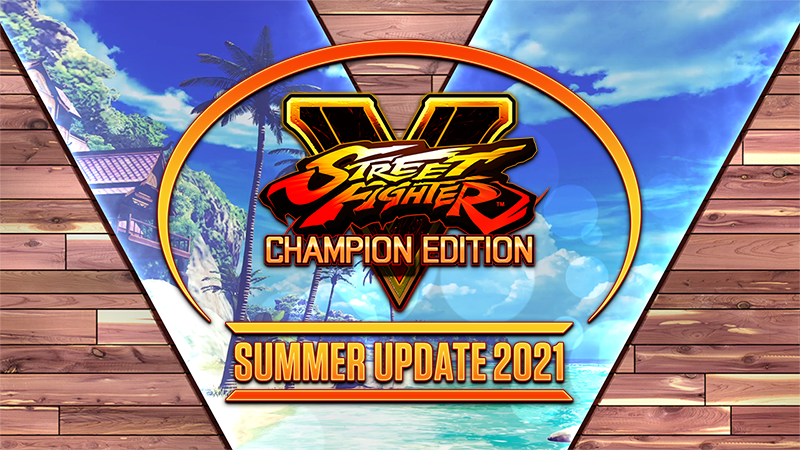 Miss the SFV Summer Update 2021? Check out our recap of all the news and reveals!

The SFV Summer Update 2021 show is coming your way, exclusively on Twitch!

Join us for updates and behind the scenes looks on SFV including Oro, Akira, and more! 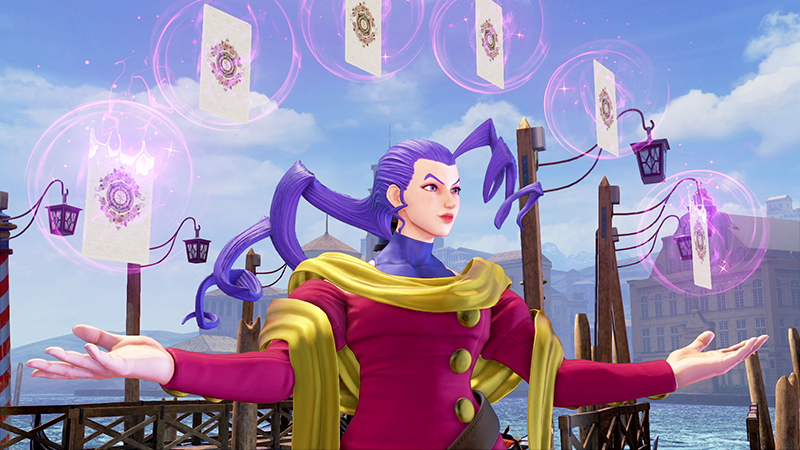 With her latest iteration, Rose comes equipped with powerful moves that longtime Street Fighter fans are sure to recognize. Her “Soul Satellite” makes its return from Street Fighter IV as a V-Skill, allowing Rose to summon orbs and put pressure on her opponents. Her “Soul Illusion” from the Street Fighter Alpha series comes back as a V-Trigger which creates a mirrored Rose that performs the same attack shortly after she does.

Rose also wields a brand new set of moves such as her “Soul Fortune” V-Skill, allowing her to draw one of four tarot cards to buff herself or debuff her opponents. This new skill unlocks a new dimension of gameplay for Rose players, who can now decide when to play offensively or defend themselves depending on the tide of battle. “Soul Dimension” is Rose’s new V-Trigger which she can use to teleport to one of three spots on the screen to offer expanded combo options.

Enjoy Rose and the other amazing content included in Season 5 with the Premium Pass and Character Pass, available now! 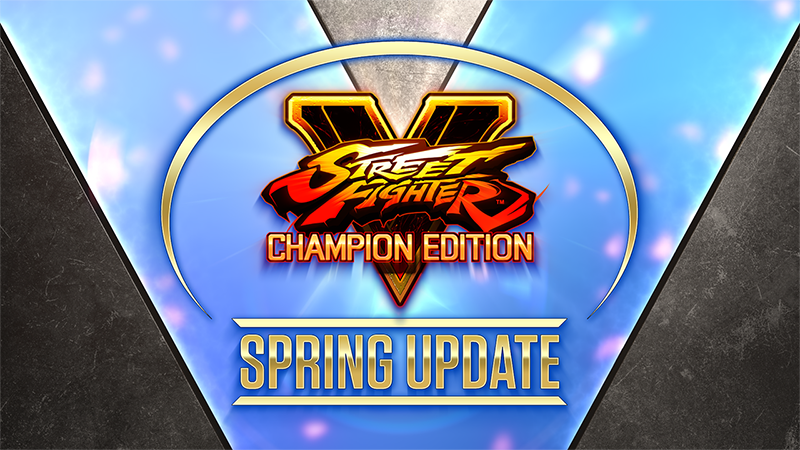 Spring is in the air and our crystal ball reads that the "Street Fighter V Spring Update" is soon approaching! Tune in on April 6th at 3pm PDT for new details on Season 5, including more information about Rose, Oro, an upcoming collaboration, esports news, and more! 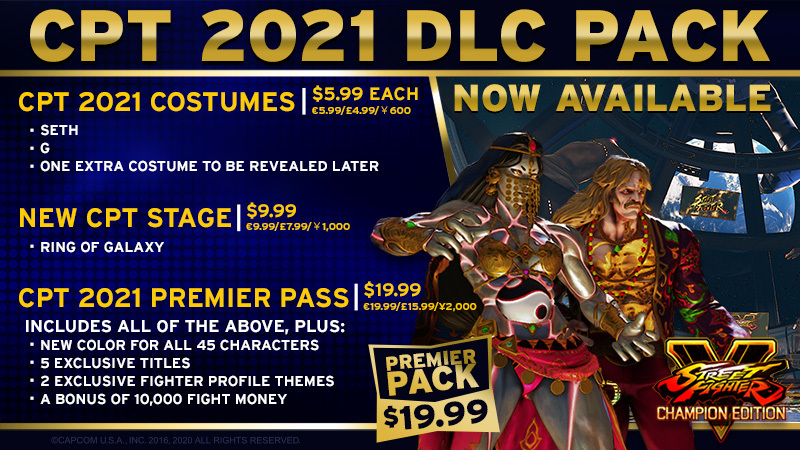 A new year brings a new Capcom Pro Tour season and a new CPT DLC package.
This year’s CPT DLC package includes new costumes for G, Seth and a mystery costume to be revealed later. Also included is the new Ring of Galaxy Stage. All content except for the third and final costume will be available March 18.

Includes the items listed above, as well as:
• New color for all 45 characters
• 5 Exclusive Titles
• 2 Exclusive Fighter Profile Themes
• A bonus of 10,000 Fight Money 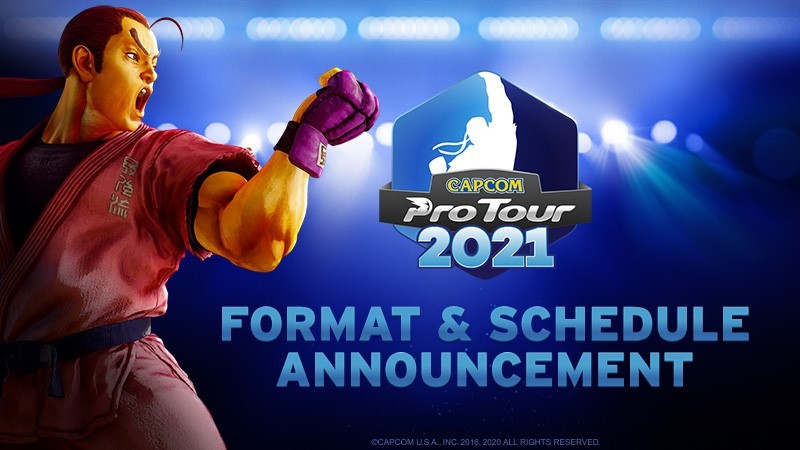 Capcom Pro Tour 2021 will be a continuation of the 2020 format due to global travel restrictions and social distancing guidelines. The new season will be comprised of more than 30 online regional premiers set across 19 territories. Winners of these online premiers will auto qualify for Capcom Cup VIII which will be held in early 2022. The Capcom Cup VIII will offer a prize pool of more than $200,000. In addition, the top four finalists of each online premier will split a prize pool of $5,000.

The opening event of the 2021 season will be the first of four online premiers for Japan. Registration for the Japan #1 online premier opens March 29th with the tournament running Saturday April 17th and Sunday April 18th. Per usual, the tournament will be streamed on the Capcom Fighters Twitch and YouTube channels. For schedule and registration details visit - https://capcomprotour.com/ 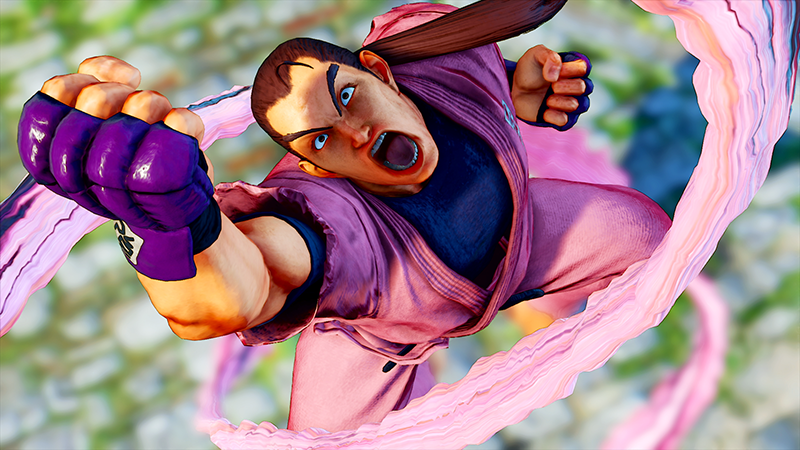 Enjoy the iconic Dan Hibiki by unleashing both returning and new special moves!

Returning special moves include Dan's classic fireball called the “Gadoken,” as well as his uppercut, the “Koryuken.” New to Street Fighter V version of Dan is the “Danretsuken,” a multi-hit punching move that can send his opponents flying.

Brand new to Dan's toolset are his V-Skill I and II, which allow Dan to interrupt any of his moves to perform his signature Taunts. This gives him a variety of combo paths and tricks to bait his opponents into getting punished… all while being flashy and doing it in style!

In true Saikyo style, Dan packs a huge punch with his V-Trigger I and II. V-Trigger I has him throwing his huge “Haoh Gadoken” fireball, which can be charged for extra damage! Dan’s V-Trigger II powers up his “Gadoken” fireball and “Koryuken” uppercut special moves. Powered up, his fireball will gain more hits, while his uppercut gains complete invincibility. With proper timing, you can add extra hits and damage to each of these moves during combos!

Enjoy Dan and the other amazing content included in Season 5 with the Premium Pass and Character Pass, available now!

The Capcom Pro Tour 2020 Season Final will feature two days of a series of prize fights featuring the 20 players that qualified for Capcom Cup 2020, as well as four invitees. Some of the CPT’s biggest names are taking part, including the likes of the UAE’s Big Bird, 2019 Capcom Cup champion iDom, and, of course, the legendary Daigo Umehara.

The Capcom Pro Tour 2020 Season Final will feature two days of a series of prize fights featuring the 20 players that qualified for Capcom Cup 2020, as well as four invitees. Some of the CPT’s biggest names are taking part, including the likes of the UAE’s Big Bird, 2019 Capcom Cup champion iDom, and, of course, the legendary Daigo Umehara.