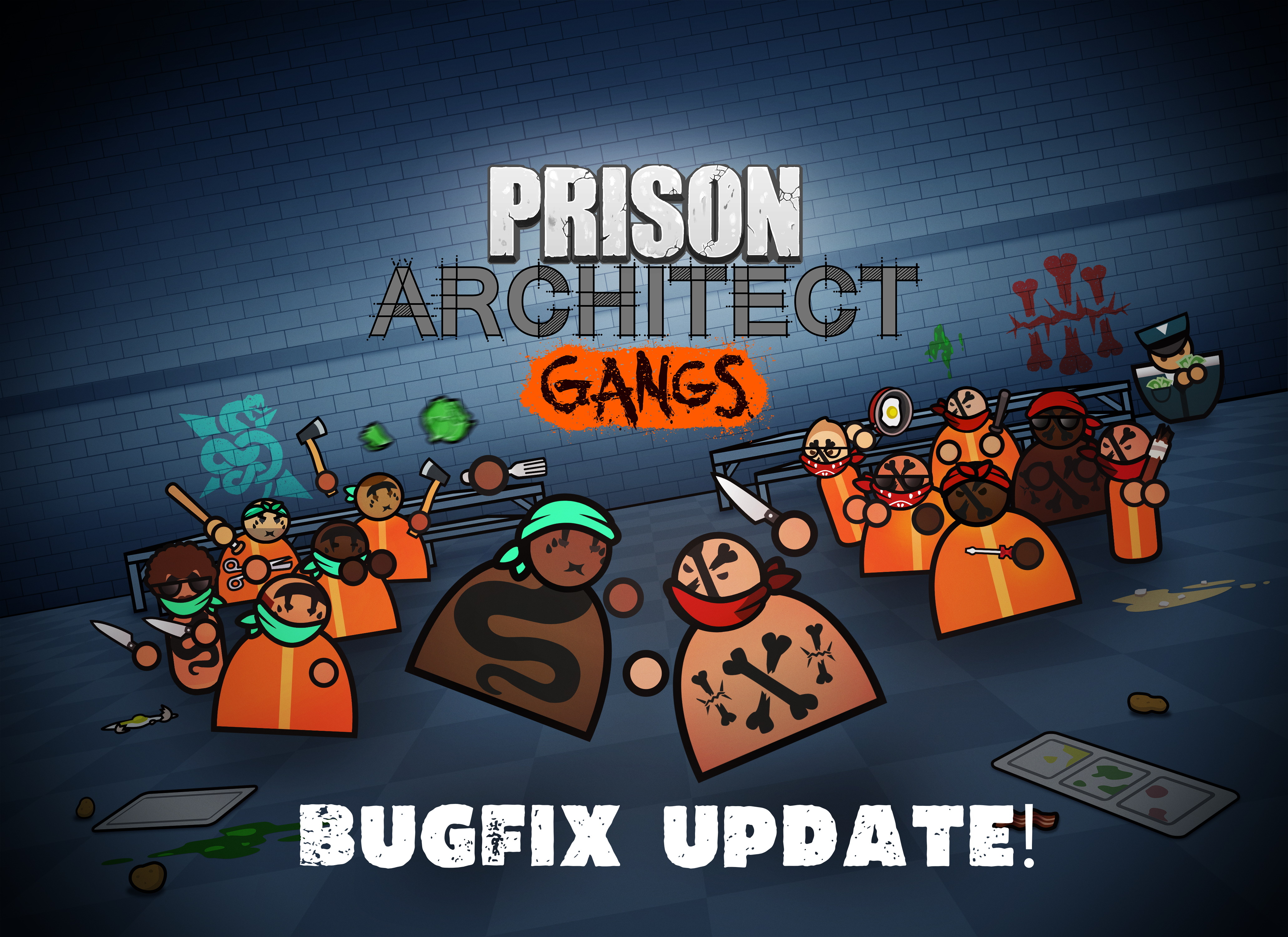 
We just evicted a gang from the canteen and found this delivery of bugfixes that were reported by the community! We are grateful for all the feedback we are seeing as we continue working on delivering even more fixes in the future! If you'd like to have your voice heard please fill out our community survey, found here: QoL Survey[pdxint.at]

Prison Architect
271
29
How come path is blocked?
There is a pipe that my workers wont install saying that the path is blocked. I fired and rehired my workmen but no go. There even is a box containing the one pipe i need right next to the "blocked path." i will get a pic up.
4 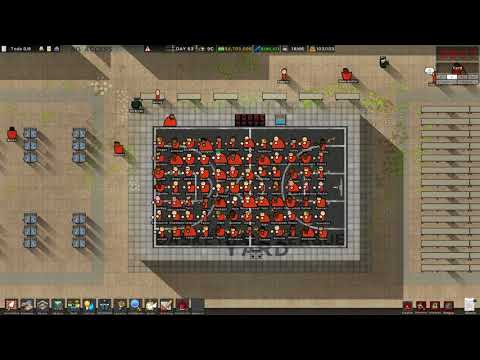 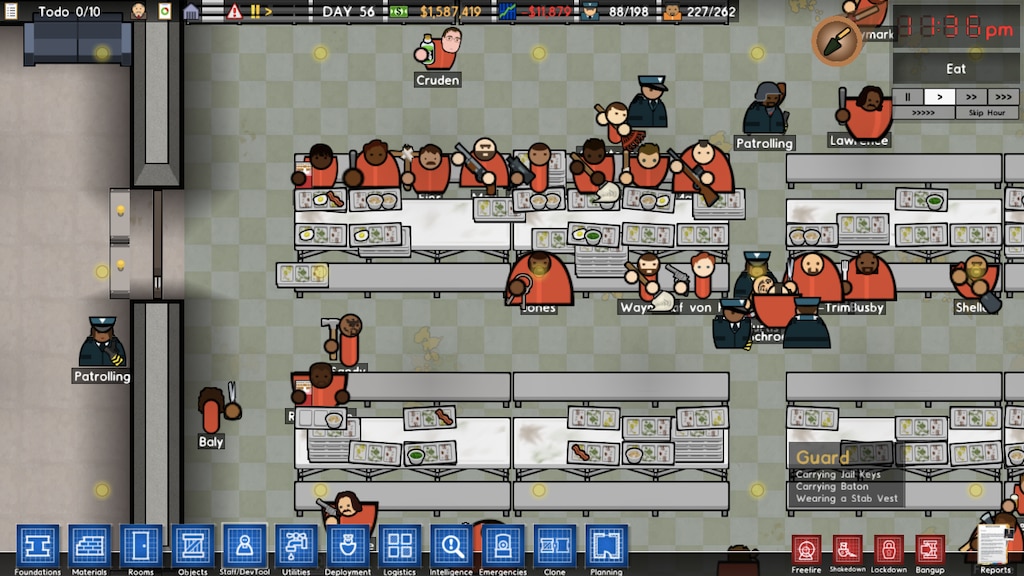 0
64
I don't see anything wrong with this 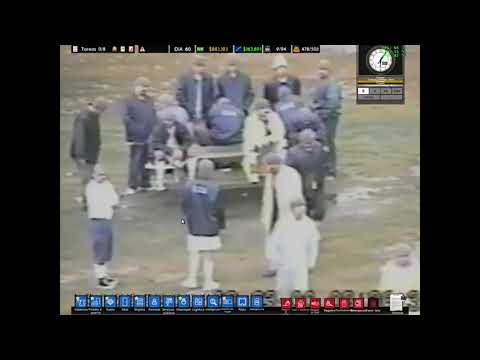 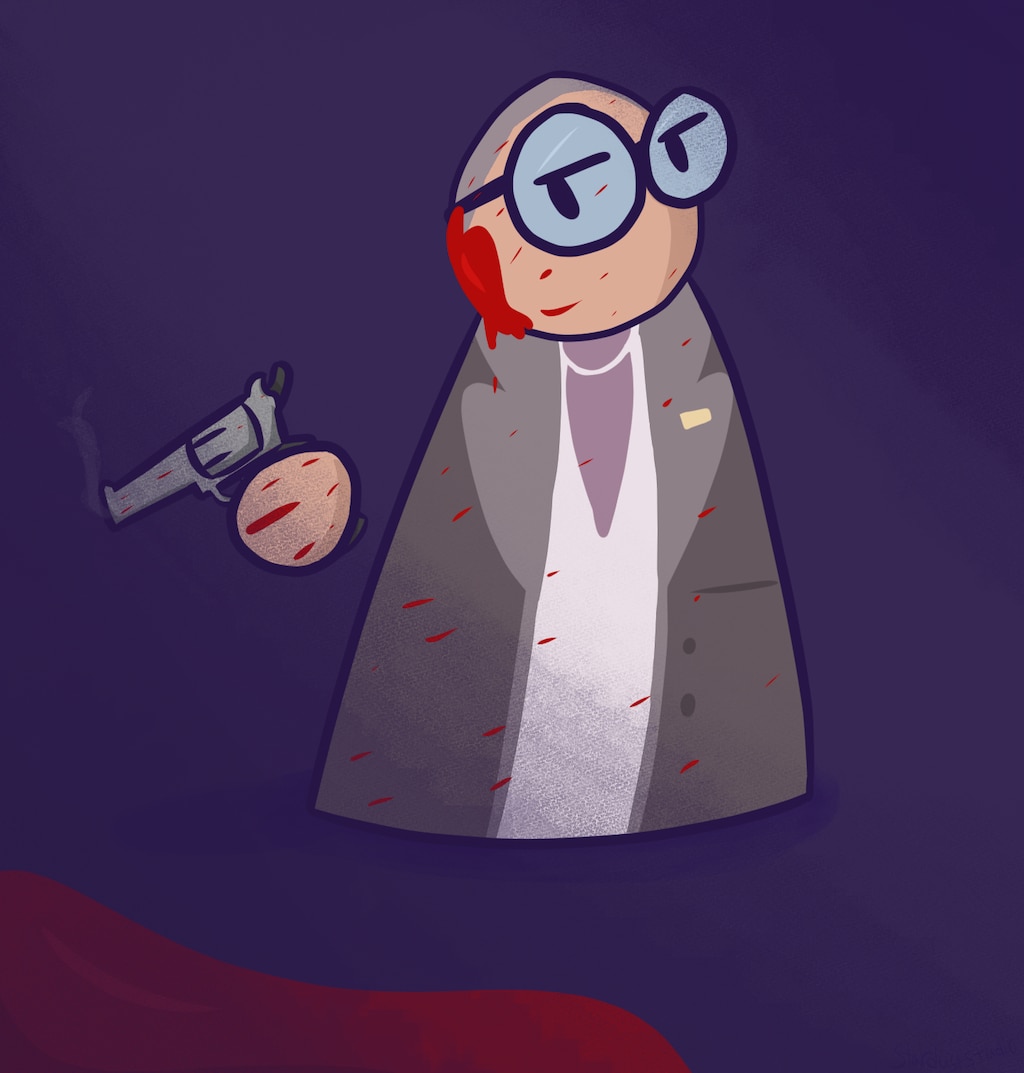 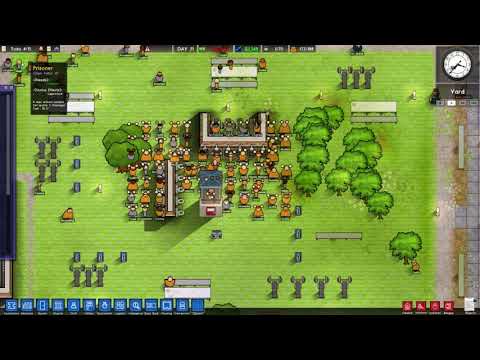 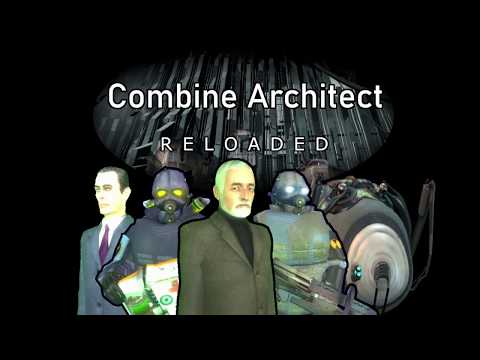 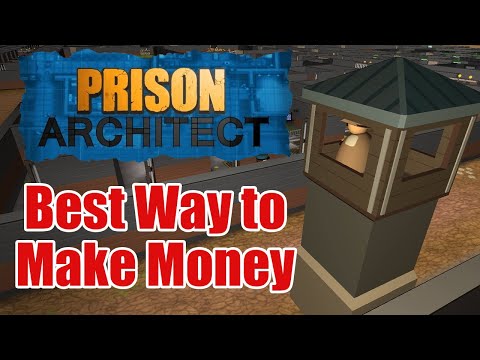 0
4
The Best Way to Make Money in Prison Architect 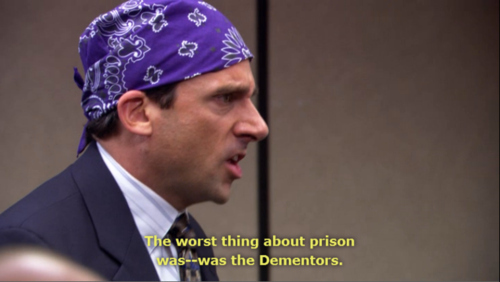 Removing mods manually
By default, Prison Architect will not delete leftover mods once you deactivated them in the game. This may lead to strange problems now and then, so in order to get rid of old stuff you can follow this guide.
32 ratings

MonkehMaster
View all guides
Can't increase armed guards max
I'm looking to increase the maximum number of armed guards in my prison, but for some reason, I can't increase it despite me adding more guard lockers in the armoury, is this a bug or is there some other reason why this is happening that I need to sort out...
7

Recommended
22.0 hrs on record
If you like simulation games it's good 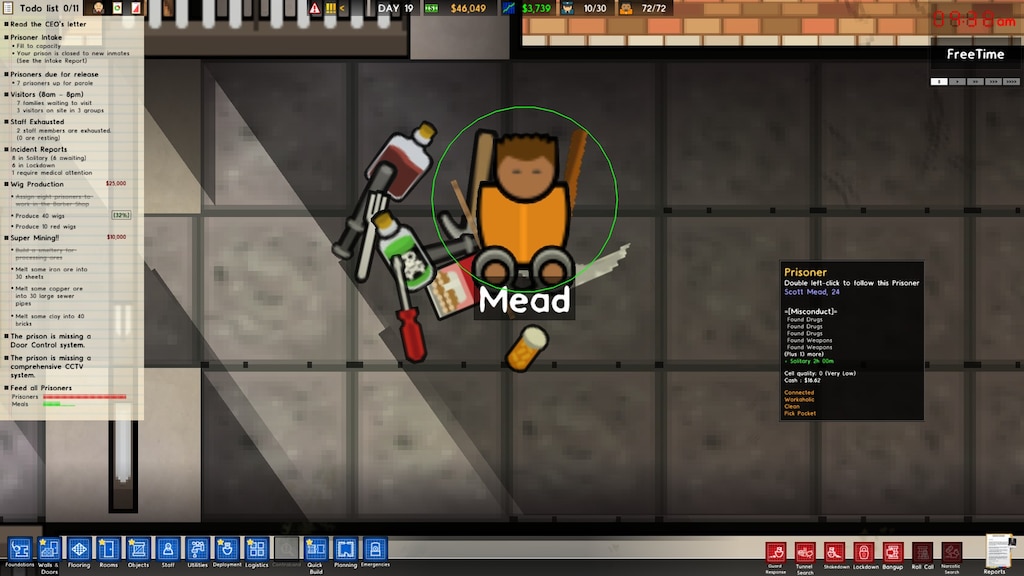 0
2
bro got the whole commissary in his pocket

Recommended
184.3 hrs on record
I really do love this game however once a prison has over 500 prisoners/staff - it becomes unstable and very slow which is a problem when you want a large prison, also if your prison runs for 100 days straight without exiting, it ends up becoming unplayable(most likely with a huge farm) Going Green overall makes the game laggy. But I think the game is well made although still needs work. 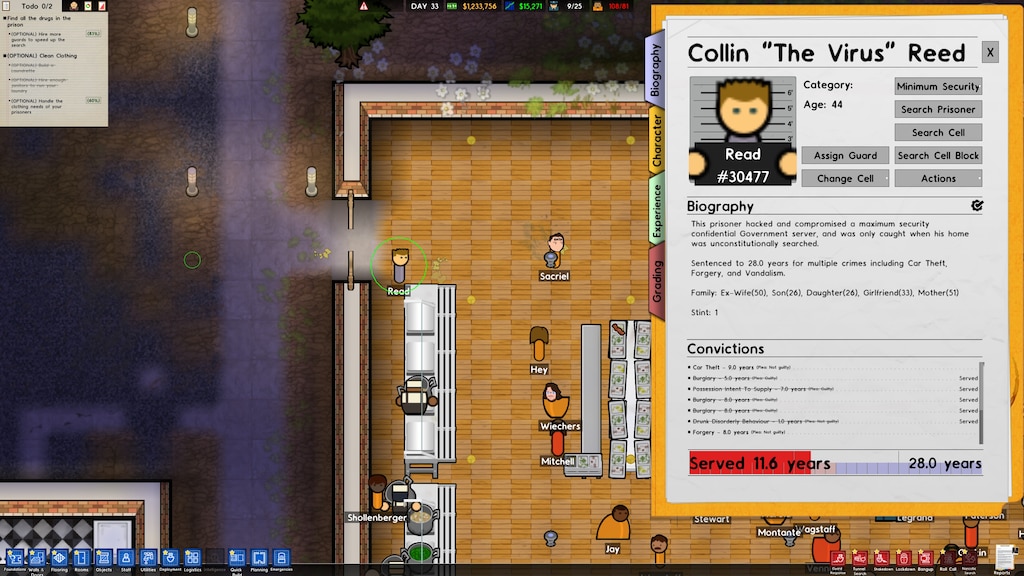 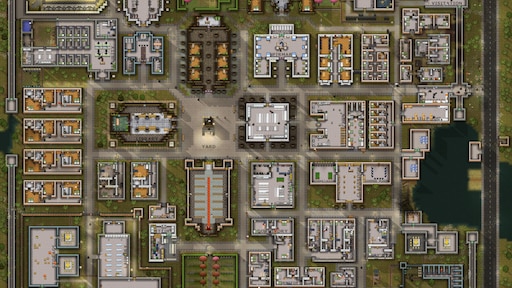 0
0
The City of New Orwells 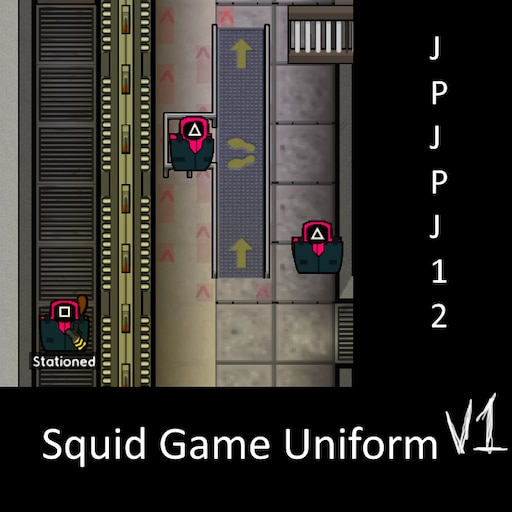 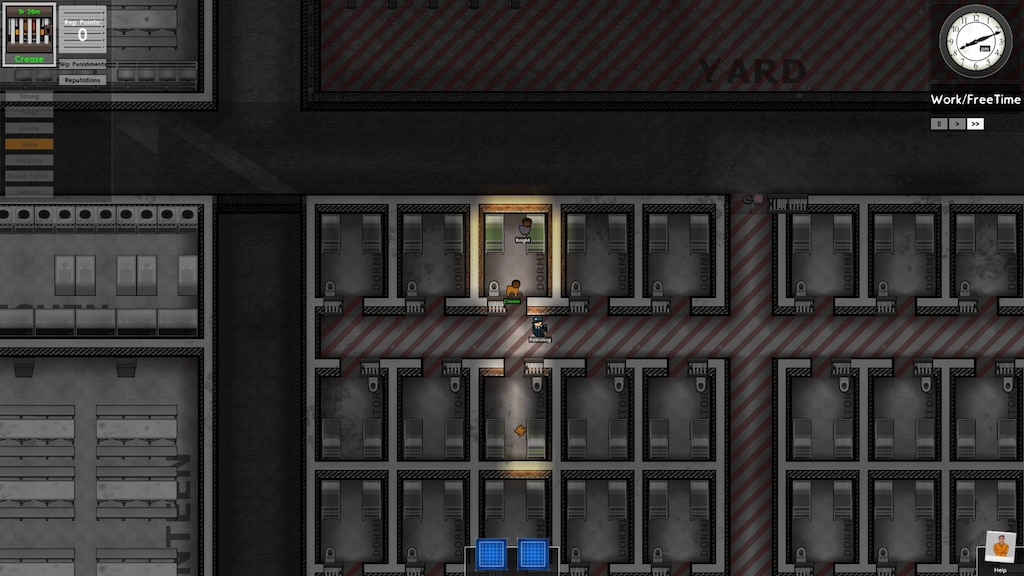 0
2
♥♥♥♥♥♥♥♥♥ prison ive ever seen, i cant even leave my godamn dorm room cause i aint permitted . whoever made this prison is a dumbass 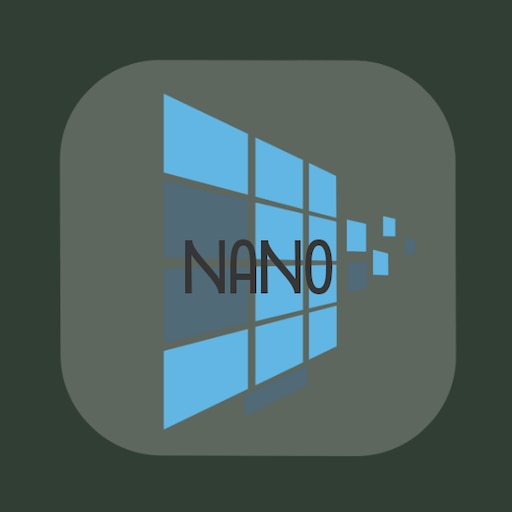 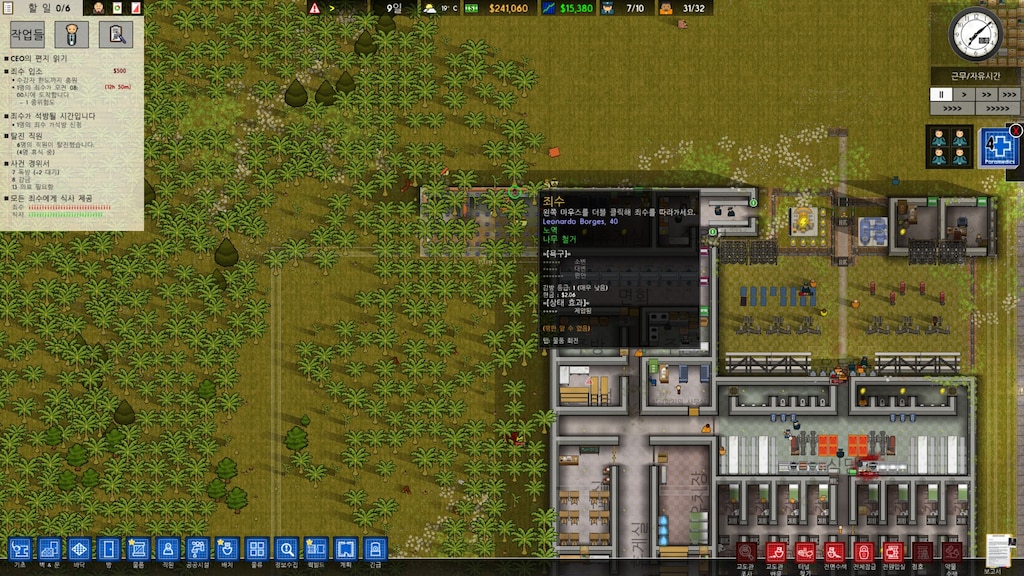 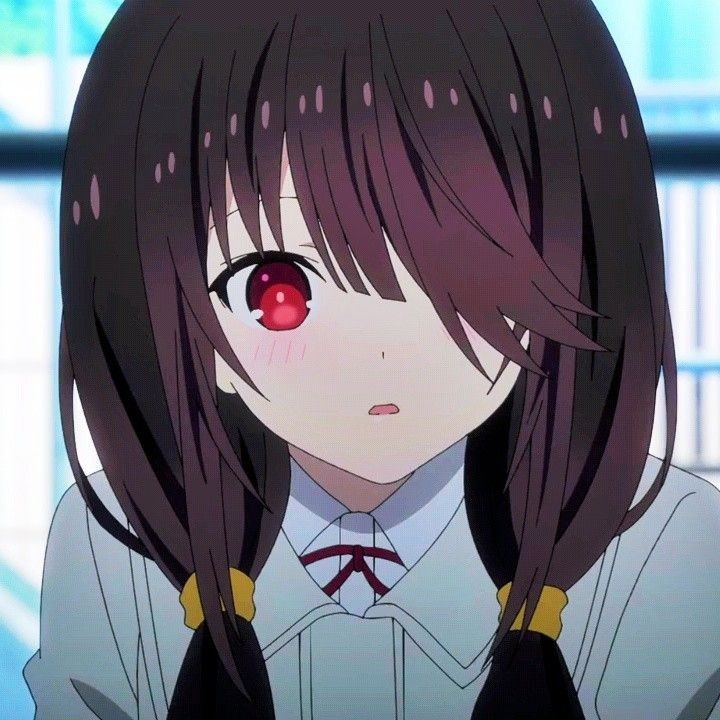 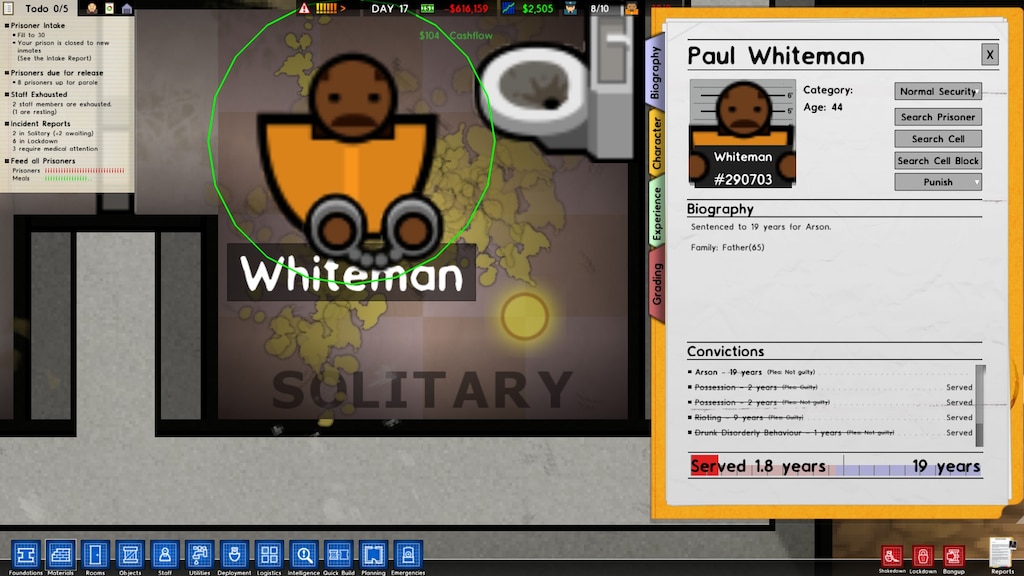 Zullfix
View screenshots
gaurds not doing anything
so does anyone know how to fix this bug where the guards wont get new prisoners, wont take ppl to solitary, wont take people out of solitary and in general just wont move people around as needed... so basically if i am not paying attention i,l i will have like 50-100 prisoners outside my gates and i start getting starve to death notifications or they starve in their cells or just out in the open with cuffs on cause the guards will still stop the violence but they wont move anyone thanks...
11

Lohung™
Aug 3 @ 8:45pm
General Discussions
Staff needs (food)
No issues till now, there is food yet staff needs are critical for food and they are pissed, is this a bug again?
3

Crusader
Aug 7 @ 6:26am
General Discussions
How come path is blocked?
There is a pipe that my workers wont install saying that the path is blocked. I fired and rehired my workmen but no go. There even is a box containing the one pipe i need right next to the "blocked path." i will try to get a pic up but it is not a steam screenie so idk if the pic would upload....
1

RonanTheNoob343
10 hours ago
Technical Issues
Prison Architect: Gangs and FREE Update KITE is out now!
Jun 14
Gangs is now available on PC and Console* to bring another layer of chaos to your prison. Question is, are you ready?

Alongside Gangs we are also releasing a FREE update we call “KITE”. It includes, besides a lot of bug fixes, two new wardens, four new guard dogs, a new mutator to remove all room size reqs, and much more! 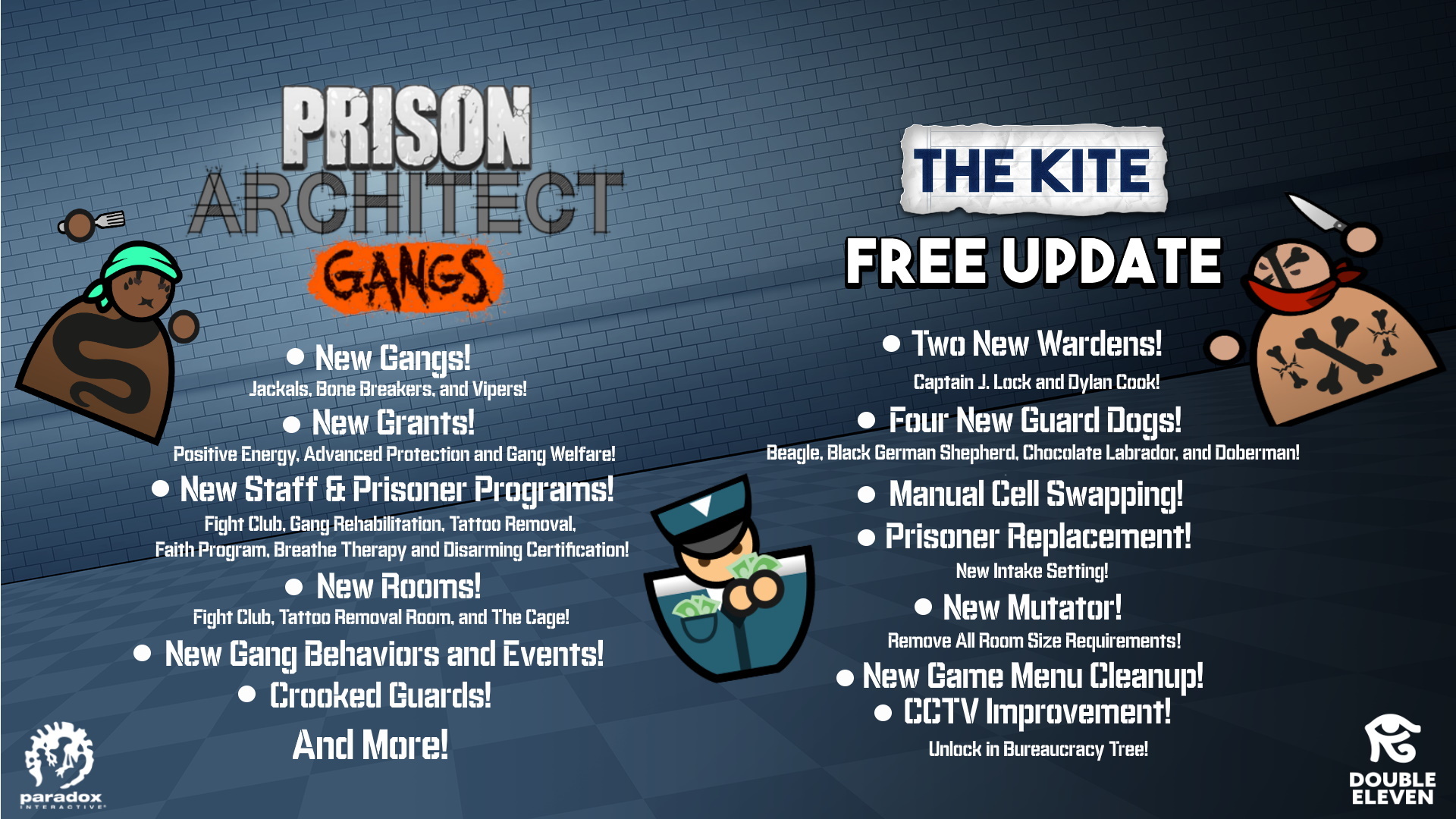 It’s that time again! Here are the full patch notes and key features for Gangs & KITE. Both the DLC and Free Patch release on June 14th, 2022.

GANGS KEY FEATURES
Meet the gang
Gangs form and grow by gang members arriving either by in-take or by recruitment. Each gang has its own personality and traits, and will naturally be drawn to recruiting prisoners with the same specific attributes.

Boiling Point
Now you can measure your inmates and your prison’s “temperature”. As gangs grow and begin to flex their strength, the 'danger temperature' of your prison will rise. Thanks to the 'Boiling point' UI, you get a detailed overview of what's affecting the life of your inmates, allowing you to act swiftly, keeping them happy, and preventing irrepressible riots.

Reform and release
Gang members are now allowed to leave their crew, help them come clean by removing their tattoos and enrolling them in the Gang Rehabilitation Program.

New rooms
Use the Tattoo Removal Room to remove gangs' tattoos, or have gang members train in the Fight Club Room, turning their destructive energy into fighting in a controlled environment.

Crooked guards
Gangs may coerce guards into smuggling contraband or accepting bribes. You can vet guards during the hiring process (Bureaucracy) as well as recruit C.I.s to identify guards that have turned.