Namely, Revolution is now available with full Russian localization, including all in-game text and achievements. A huge shout-out to the members of our community, as without them this would have never happened. We love you all!

The second part of the update has sorted out the issues which prevented some players from unlocking achievements. All achievements should now be in working order in singleplayer and multiplayer.

A small note, updating the game will override your saved progress, and you will have to start fresh. This is an unfortunate limitation of the old engine and is unavoidable in situations like this.

If you are not keen on starting over, you can choose to stick with the current version of the game for good. To do that, please right-click on Revolution in your library, go to the "betas" tab, and select "revo-1.02" from the drop-down menu. This will also stop the game from updating automatically in the future, so keep that in mind.

You will need to do this for the Dedicated Server and Revo Toolkit as well, if you are using them.

This Thursday we will be releasing a small update to Revolution.
With this update, players should no longer have issues with unlocking achievements, and the game will be getting full Russian localization.

The update is currently available in Open Beta. You can download it by right-clicking on Revolution in your library, going to the "betas" tab, and selecting "publicbeta" from the drop-down menu.

Please keep in mind that updating the game will override your saved progress, and you will have to start fresh. This is an unfortunate limitation of the old engine and is unavoidable in situations like this.

If you are not keen on starting over, you can choose to stick with the current version of the game for good. To do that, please right-click on Revolution in your library, go to the "betas" tab, and select "revo-1.02" from the drop-down menu. This will also stop the game from updating automatically in the future, so keep that in mind.

You will need to do this for the Dedicated Server and Revo Toolkit as well, if you are using them.

Much love from Croteam.
Danny 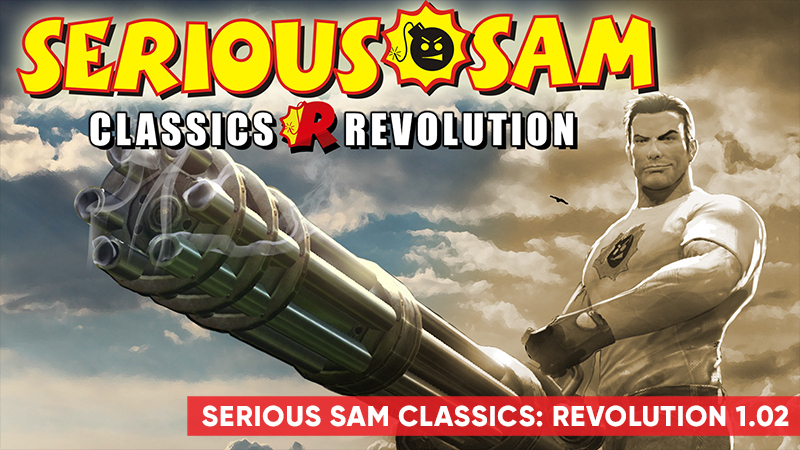 I can’t believe it’s been a month already, but we’ve been hard at it, trying to make Revolution into what it was meant to be at first. We were all over your reports and feedback, fixing, readjusting, rebalancing and expanding in the meantime.

Our main focus was fixing game-breaking issues as well as the Workshop issue that came up, as we love seeing your mods shine. This was sorted out, so please make magic happen, we can’t wait to check all your custom stuff out.

This update also takes care of the leaderboard issues with survival levels, as well as many smaller issues with Netricsa, collision, textures and such. More detailed update notes can be found below.

NOTE: This update will once again render your saves useless. Unfortunately, this is due to some limitations of the old engine, and there are no workarounds at this point in time. That’s also one of the reasons we are trying to provide you with substantial updates less frequently, rather than smaller updates that would break saves constantly. Sorry about that.

In the future, we will be keeping one older build live even after updates, so you can continue with your progress in case you don’t feel like you’d benefit from the update. We use a similar thing in our other games as well.

Player Feedback
We value your input, and we want you to reach out to us with all feedback. For general thoughts and ideas, please use the General section of the Revo forums on Steam. Should you encounter any issues or bugs, please report them on the Tech & Support subforum, along with your game log (located in the game installation folder) and a detailed description of the issue. 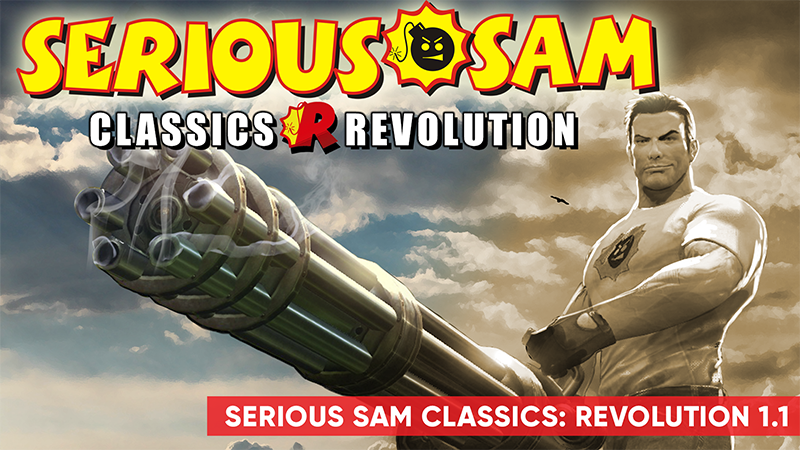 Hey folks,
thank you to everyone who jumped back in Revolution over the past couple of days and thanks for all the feedback you have shared across our channels. We've just updated the game with additional changes, looking to balance the game further.

Here's a rough changelog:
- fixed missing spawns on several levels throughout the game
- fixed several issues that prevented progression in some cases on Bright Island
- various tweaks and rebalances to fights across all difficulties based on community feedback
- many smaller bug and glitch fixes across the board

We'll be making patches like this in the weeks to come, so please share all your additional feedback and concerns here on Steam forums. We're watching in a totally non-creepy way.

Cheers,
Danny on behalf of Croteam. 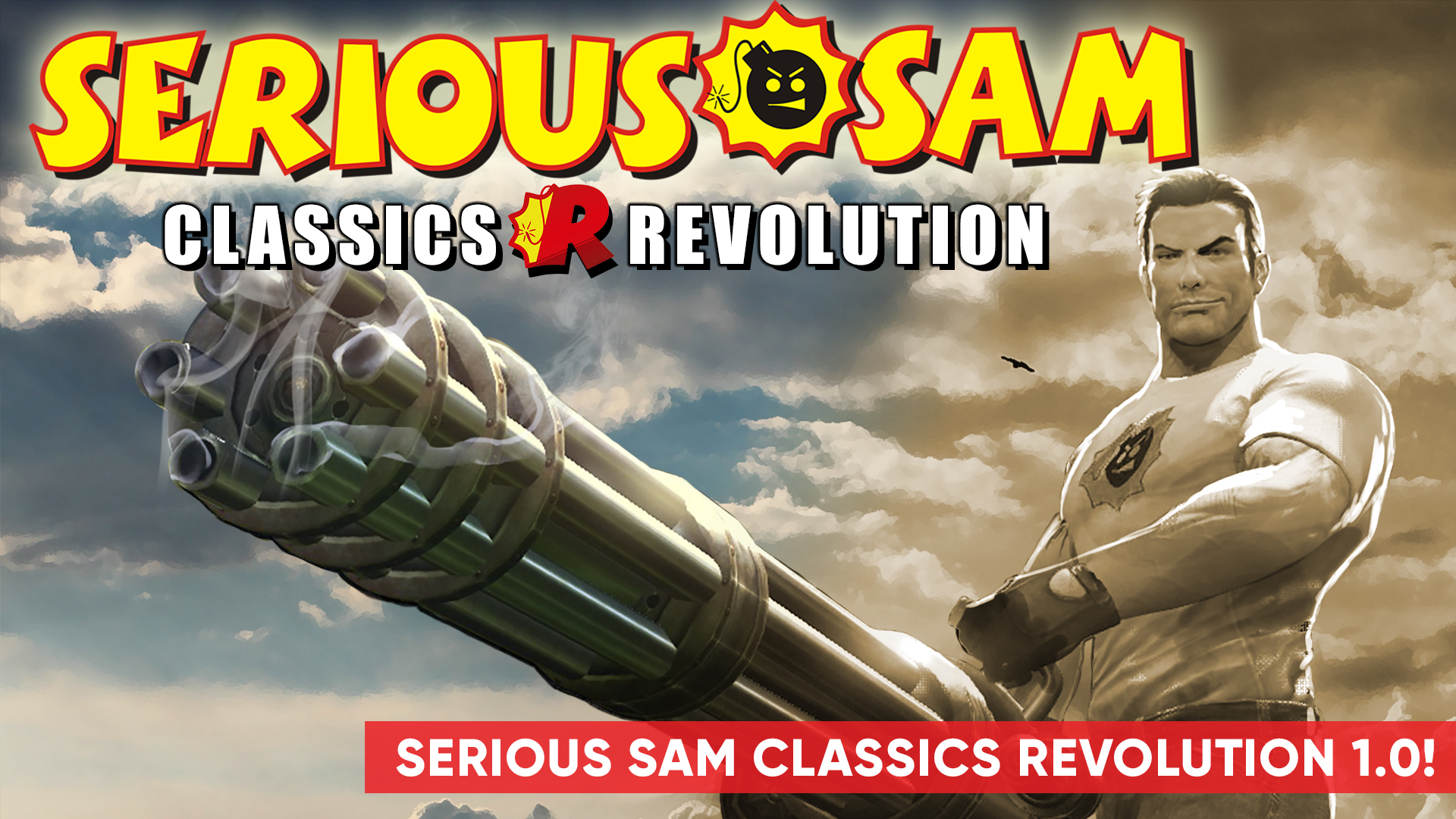 Happy days!
Serious Sam Classics: Revolution is out in the wild as a fully released game, and we're celebrating with a huge discount!

You saw this coming, let's be honest, as we have recently announced Croteam will help to get this project through the door.

Serious Sam Classics: Revolution is now THE best way to enjoy Classic old-school Serious Sam games, improved and expanded upon with many often requested changes, tweaks, and fixes, as well as a brand new original campaign - Bright Island. The game features 8 new maps, on top of those available in the originals, and some brand new achievements. We mustn't forget the workshop support, so get in and showcase your modding skills. We can't wait to see what your imagination will spawn.

Huge thanks and congrats to everyone Alligator Pit and everyone else involved with this project over the past couple of years.

We bet this comes as kind of a shocker to some of you, but we’ve been lurking from the shadows for some time, looking to revive Revolution properly. That’s right, the project hasn’t been abandoned. Instead, it was “on ice” for a while due to life happening to Alligator Pit dev team. This is, after all, a fan project that was developed on top of the original Serious Sam Classics.

With that being said, we have always been eager to get Serious Sam Classics: Revolution through the EA door, and the time is almost right. The development has been kickstarted recently and we have made some huge steps forward. Anyhow, we’re almost ready to wrap it up and will do so by the end of the week. Before we do, however, we have decided to test the waters with an open beta available to everyone.

To play it, simply right click on the game in your Steam library > properties > betas > and select “publicbeta” from the drop-down menu.

Since the last time the game was updated, we have helped with an original singleplayer campaign including 8 additional levels and a boss you can fight against. There were, of course, tons of fixes made as well, so Revolution is now in a pretty good state.

P.S. A few of you noticed a certain achievement has recently been removed. We have listened to your feedback and we realized that the “Developer Rage” achievement can be frustrating to those looking for 100% completion. We have removed that one and will be replacing it with four other achievements, so be ready to start hunting!

Serious Sam Classics: Revolution
142
27
AP_3381 is now live!
Dec 19, 2016
First of all, Happy Holidays from all of us at Alligator Pit! From today until the 31st, everyone will have Santa hats on their player characters. Have fun!

Thanks to everyone for their feedback and reports, here are the latest changes:

As you all know, Sam has a sister. And her name is Sammy. She's decided to take a detour through Egypt this time around and visit the Revolution as a new playable model in the game!

It's summer! And you know what that means. That's right, extra protective wallets for the Steam summer sales. Revolution is on sale! Get it for yourself or your friends for 90% off!

We'd also like to tell you a little bit about ourselves. Who's Alligator Pit, really? What's changed since the last time we introduced ourselves to the community? Read more about it here[samrev.com], on our latest official blogpost!

Talking about community contributors, we'd also like to showcase our brand new achievement icons! Check them out on Steam! They were made by this guy[adrianbukowski.deviantart.com], check out his other stuff!

Also, we created a brand new documentation website for information about dedicated servers, scripting, and more! Check it out at http://docs.samrev.com/. This documentation can be contributed to on Github[github.com] as well, so feel free to submit any pull requests if you have anything to add.