Extra (not present on the roadmap):
- 1 Minor relic to change character appearance (where applicable) and maximum active weapons per run (fill 100 slots in the COLLECTION page to unlock)
- 1 Minor relic to show discovered unions and evolutions during a run (found in Inlaid Library)

Bugfixes:
- Tentative fix for standard saves not working on Steam Deck for some users 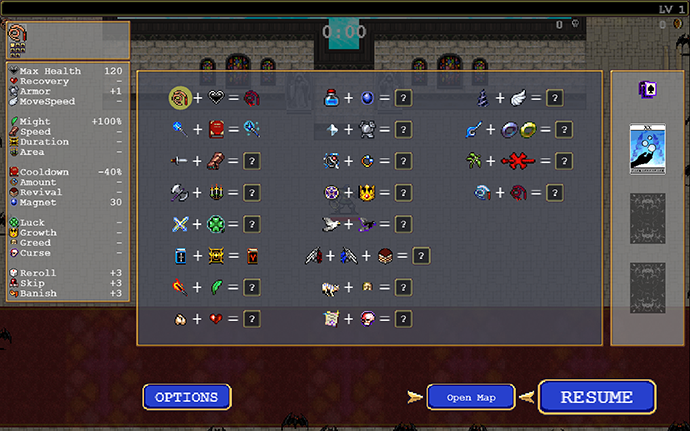 24 of 24 Characters done!
And so we're done, we have finally finished implementing all playable characters for Vampire Survivors....
who am I kidding, there's no way I'm not adding a few more before version 1.0 😂
Please keep an eye on the devlog in Discord or on the socials for some surprises!

100.000
Positive reviews on Steam! 😱
This is incredible, thank you very much to all of you for making this little game such a big success! It's thanks to you that now we can also talk properly about...

poncle
When I wrote the name "poncle" for the first time, some 10 years ago, I went for a lowercase "p" because I had this pretentious thought of "this would serve as a reminder to stay small and humble no matter what". And oh my, with things being so crazy with VS that actually turned out to be a very good reminder to have!

We had a team for some time now, but I'm taking the opportunity to talk about it only now that one more developer, David, is finally joining me in working full time on the current version of the game. This doesn't mean we're going to reach version 1.0 of the game faster than expected, but it means we'll be putting in the game even more features and be faster in polishing rough edges. One of the new relics from this patch, the Grim Grimoire, is a good example of what kind of extras to expect!

If you've been following this kind of longer update posts, then you probably already know that since January we had freelancers working on porting VS to an industry-standard game engine. Some of those freelancers, Adam, Matt, and Sam (strictly in alphabetical order), are now part of poncle and are working full time on the engine port!
Initially we thought about re-making the game using features from the new engine, but the resulting game, even if better optimised, didn't really feel "Vampire Survivors" enough. For starters, the physics were too accurate and realistic, enemies weren't even able to push one another inside walls, or the fonts were just too crisp and easy to read. That was not acceptable.
So we're now busy rewriting the entire physics system so that it feels arcade-y rather than realistic and tweaking a lot of aspects of the main gameplay loop so that in the end, ideally we'll have a version of Vampire Survivors that plays just like the current one, but that is free of hardware and controller compatibility issues and that performs well even when there is an unreasonable amount of projectiles and enemies on screen.

We're still planning to release the new version this summer, but in reality "it will be ready when it's ready", we won't be rushing for an arbitrary release date and will take all the time it requires to be done right.

If you hang out in the VS Discord or follow the VS social media accounts, then you most likely already know the work of Beth (Slothie), our community manager, who's also working on a few surprises beyond the usual teasers and polls!

To sum it up, we might be getting close to the 𝓬σŇ𝓬𝔩𝕌ş𝐢σŇ of Vampire Survivors, but for poncle that's just the beginning :) 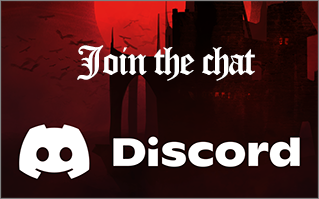 Tweaks:
- The Stage Selection screen will now display when the lunar eclipse event is available in Moongolow (required to unlock Stage 5)
- Added a toggle to disable Golden Eggs bonuses
- Updated some graphics
- Changed PowerUp markup cost from percentage-based to a flat increase
- Added little icons for Vacuum, Rosary, Orologion, Nduja, and Floor Chicken on the map

Bugfixes:
- Bonus Revivals from Golden Eggs not working
- some controllers crashing the game at random intervals
- vanilla game crashing after save data alterations from mods
- Rerolls, Skips, and Banish disappearing from the PowerUp screen on old save files
- Fixed some special achievements needing a reboot to unlock on Steam

Stage 5: first iteration
I know this might take away some of the magic, but, after the previous "small" patch, I feel like it's important to let everyone know that currently there are no secrets nor particularly complex mechanics in Stage 5.
The main point of it is unlocking the new character, the stage will have to go through one or two more iterations before being considered complete :)

Thanks to everyone once again for your support in the beta, on social media, and of course for playing the game! 🙏

Tweaks:
- Halved base duration of Shadow Pinion and Valkyrie Turner
- Shadow Pinion and Valkyrie Turner striking attack has a damage bonus depending on how long it has been "charged"
- Arcana XIX - Heart of Fire also affects Valkyrie Turner's striking attack and Phiera Der Tuphello
- Every bonus point in Armor now also increases retaliatory damage by 10%. Retaliatory damage is currently inflicted by NO FUTURE and Arcana XIX
- Music and music mods can now be previewd in stage selection screen
- Rerolls can now be used to draft Arcanas

Bugfixes:
- Unfortunately, due to one of the new game mechanics, the time has come to fix the Bone-stuck-in-the-boss glitch
- Tentative fix to items sometimes not leveling up near the end of a run

New minor game mechanics
Due to the amount of work needed to improve on the save data issues with Mac and Steam Cloud, and also for the future patch 0.7, patch 0.6.0 will have less content than usual. I'm sorry for the inconvenience, but I also hope you have fun with the new little mechanics added in this patch!

One of the new mechanics is mostly for players who simply enjoy playing the game even when there's nothing left to unlock, so please don't feel like you have to grind for these new bonuses.

Future content, unlocks, and achievements will still be (un)balanced on the vanilla character stats and power-ups* and so will not expect you to have accumulated any of these new bonuses.
* Curse excluded

Vampire Survivors
3,284
202
0.5.209 Savedata Recovery Menu
May 15
To access the recovery menu, go to Options from the main screen and click Data Recovery.

A few options will show up if the files required for the recovery are on your machine:

Load Last Run : loads the backup made at the end of your last run (synced with Steam Cloud)

Show Local Backups: shows a (possibly very long) list of backups that are stored exclusively on your machine. Click one of the entries to restore the backup from that version/date/time

Load Old System Data: useful to Mac/Linux users only, this should recover the data saved by the old system that got discontinued since Sunday the 8th of May.
Using this on Windows or for other reasons might yield unexpected results, as the old save system was highly fragmented and prone to data corruption. 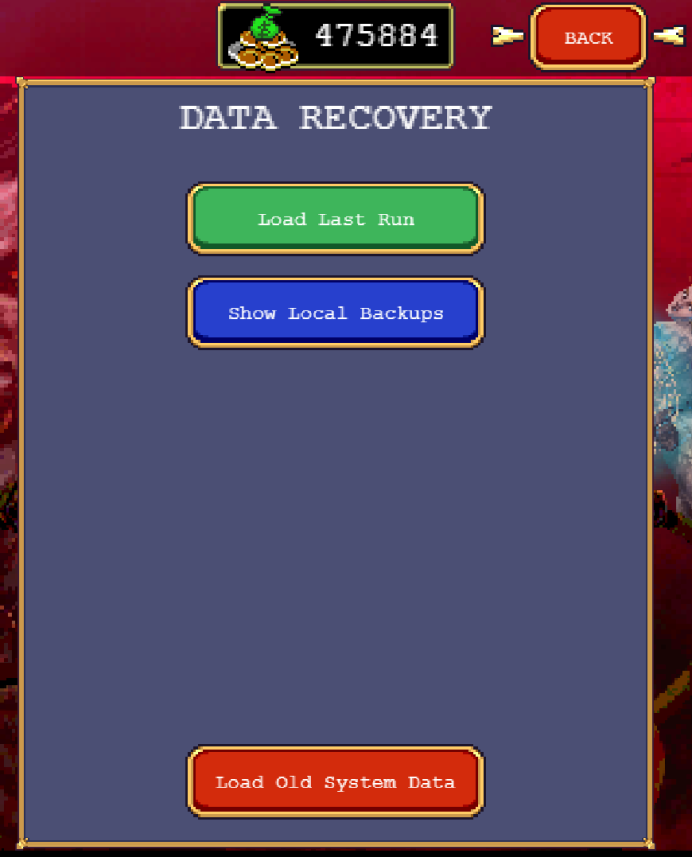 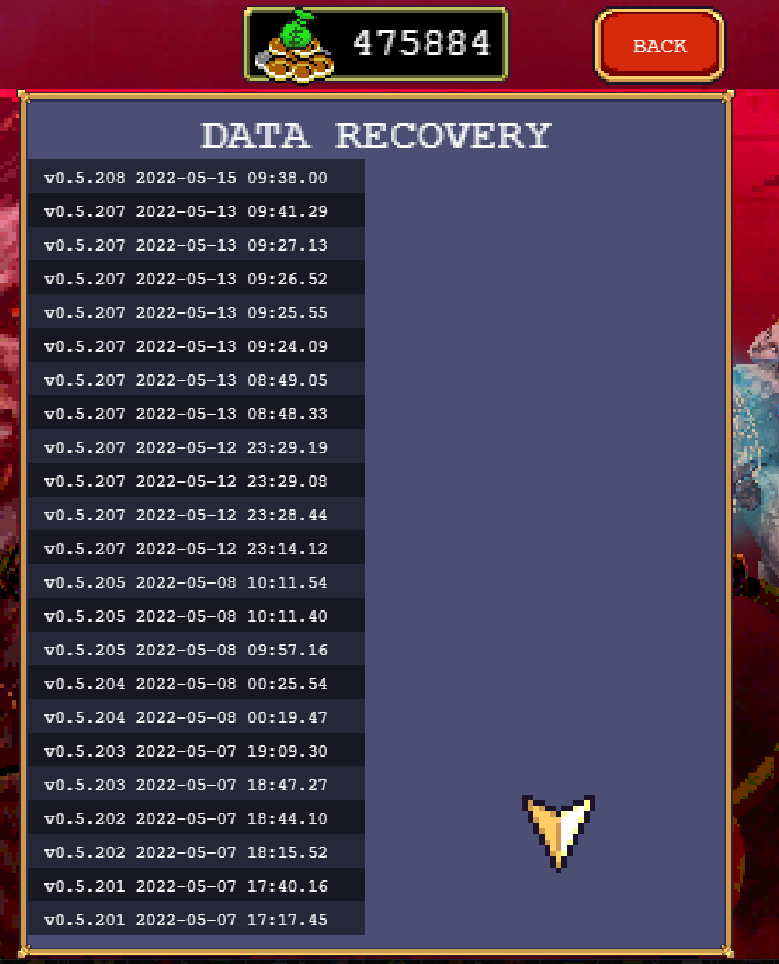 Community
Thank you very much for all the new subscribers on poncle's YT channel, thanks to you we were finally able to disable ads on all our videos, so you can enjoy the content in peace!

Bugfixes:
- Tentative fix to chicken/coinbag choice presenting itself when there are still items that can be leveled up
- Phieraggi is now affected by Arcana V - Chaos in the Dark Night.
- Added an extra backup system for save data in %appdata%/Vampire_Survivors/saves/backups. These backups will not sync with Steam Cloud, so you can restore them manually if needed.

Community
A big welcome to all the new players, and a big thank you to all the returning players that are pushing the game once again to some incredible concurrent players peak! 🤯


The new content in this patch will allow you to summon chaos and vicious creatures and also tap into the great occult power of the Arcanas. It sounds like this though:

Tweaks:
- Minor changes to spawn waves
- Changed base drop rate of some Treasure Chests from 80% to 100%
- Reduced Cooldown of Carréllo
- Each rank in "Skip" now gives 2 skips instead of 1
- Specified Clock Speed in Stage Selection
- Removed special BGM from weapons (it stays on special characters only)

Bugfix:
- Game data will now be saved when backing out of selection menus

How to unlock Arcanas as a game mechanic
- Find the Randomazzo at the top of Stage 4. Be careful.

How to unlock more Arcanas
- After finding the Randomazzo, new unlocks will be available and visible in the Unlocks menu. There are 6 Arcanas in this patch, more will be added in future patches.

How to activate Arcanas during a run
- You get to choose any unlocked Arcana at the start of a new run. After that, if you have unlocked more arcanas than just the default one, then there is a chance you can get a random draft from Trasure Chests. Most Treasure Chests containing Arcanas are carried by bosses spawning at minute 11:00 and 21:00. You can carry a maximum of 3 Arcanas at the same time.

The real Early Access content
Because of the way I've originally tested the game mechanics in VS, most of what we've seen so far has somewhat always been from the realm of the expected.

With Arcanas that's going to change a little.

This new layer of game mechanics will be largely untested due to the large amount of interactions it could have, so there might be major changes to them as we move forward in patches.

Please keep this in mind when discussing Arcanas, there will inevitably be talks about what's trash and what's op, but my concern is about people fighting over this kind of stuff and forgetting the main point of the game: having fun.

So I hope you have fun finding new ways to break the game and reach 1fps again, and fingers crossed there won't be need for nerfs, only buffs :)

Tweaks:
- Heavily reduced chances that enemies will spawn inside walls in the Dairy Plant
- New entry in the Options menu "Less physics, more FPS". It's enabled by default, if you don't like it or for some reason it glitches badly on your machine, you can disable it from the Options menu from the main screen.
- Guide arrows don't jitter anymore - please enable the guides from the Pause menu if you have the Map but can't locate coffins etc.

Bugfix: some projectiles not moving when there are no enemies to target
Bugfix: Clock Lancet disappearing when moving upwards for too long

New gameplay option
Unlocked by finding the new relic in Stage 4, the new "Hurry" option in Stage Selection will simply make the timer tick twice as fast, so enemies waves will change every 30 seconds in real time instead of the usual 60.

What's next
Arcanas are coming soon :)