Untrusted is an online multiplayer (10 to 16 players) hacking / social deduction game: as an hacker, hack your target - as an undercover agent, disrupt the operation. Follow your objective or kill everyone - the choice is yours.
Visit the Store Page
Most popular community and official content for the past week.  (?)
Untrusted - v1.106 changelog
Jun 20
New Features

+ 7 new avatars "Famed Operatives" series available! These avatars will be purchasable for the whole summer, so until September 21st! Check the discord regualary as there will be some airdrops for some code to redeem them for free!
+ 2 new badges
+ 1 new consumable "Dr.Ochre mysterious package"

+ Experimental: "Corrupt Detective"'s "Agent Scum" won't trigger upon suicide. This will be reverted if it will be abused to not help agents discover the OL identity.
+ "Intelligence Informer" can now leave the "watched" feedback without actually visiting: the Agent Leader can choose wheter to have the informer spook or not the target. CCTVs can catch that "intelligence informer" was used, althought it will not reveal who the Agent Leader is (as the Agent Leader, effectively, does not visit the target)
+ "Blackmailed Informer" will now let the Rival Hacker know whenever agents have succesfully struck a deal with a player, possibly showing also the identity of the mole (RNG).
+ Coin rewards rebalance

+ It is now possible to paste directly in chat someone else's log.
+ Fixed other person's log not showing with dyslexia friendly font when selected in the options
+ Miscellaneous minor improvements

Untrusted
12
4
Any youtuber recommendations?
Love the idea but I'm very much a visual learner. Any recommendations of people playing and explaining the game?
1

The server will go under maintenance Sunday June 20th, roughly from 10:00 CEST to 12:00 CEST for standard maintenance and the deployment of a small patch.

During this brief window, the game server won't be available.

+ New June supporter token and avatar! It's summer, have some pineapple!
+ Added single sign on login and multiple servers support! What does it means to you? Not much, until we experience a new CCU peak (if ever): I will be able to add multiple servers (or when/if in the future we want to have separate servers for separate regions). That's why today's patch seems small, a lot of work went into this feature :)
+ Kicked players won't be able to rejoin the lobby they were kicked from
+ Bug: whenever a neutral gets root, the sociopath can also get root with crack credentials, resulting in two players being able to use anonymous broadcast. This was not intended, however it is so rare and hilarious that I've decided to leave it as is for now, unless some form of abuse-meta develops arounds it.

+ Experimental color coded events in day/night transitions for few key messages
+ Experimental SFX: being mentioned in the general chat (es. if your name is Dr.Green, just saying 'green' is enough, even on pasted logs ) will trigger a notification sound (cooled down every 10s to avoid abuse).
+ Fixed joining an invalid lobby (expired, full, or by inputting the wrong password) throwing a network error message rather than the appropriate message.
+ Fixed winstreak multiplier not showing correctly >= 15 wins
+ Fixed a bug that would not remove the "steam cart" icon from the tutorial after logging in via steam, logging out, and then starting the tutorial
+ Fixed "you may not see this operative log" message showing upon click over a dead/arreste player that had erased their log
+ Miscellaneous minor improvements and bugfixes

+ Major Network Changes o>
+ Fixed a bug that would allow "Upload Intel", "Download Intel" and "Crack Credentials" to still work even if the nodes were beyond visibility, if a chokepoint node was rollbacked the same turn.
+ Improved chat filter and flood filter (still needs tweaking)
+ Miscellaneous minor improvements and bugfixes

+ Using follow on an enforcer which is protecting someone (which gets arrested) will get a "<enforcer> did not leave his hideout" message.
+ Opening the game log from the in-game link may leave untrusted as "running" on steam

Untrusted
21
4
so we allready got gamethrowers
Played an entire game where my field agent refused to arrest anyone or use his powers :(
19 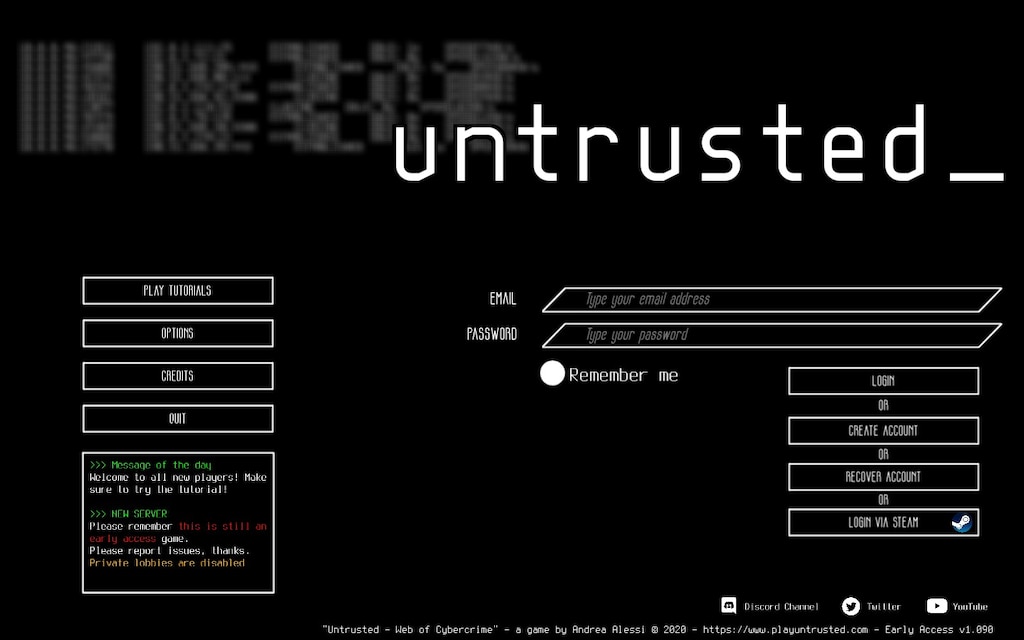 NETSEC roles basics guide
If you are new, you usually don't know what role does what things, so here you got quick reminder of what every netsec role do. Btw, this informations are only BASICS. They tell you how to play as that role, i f you don't know, or can't remember. Players... 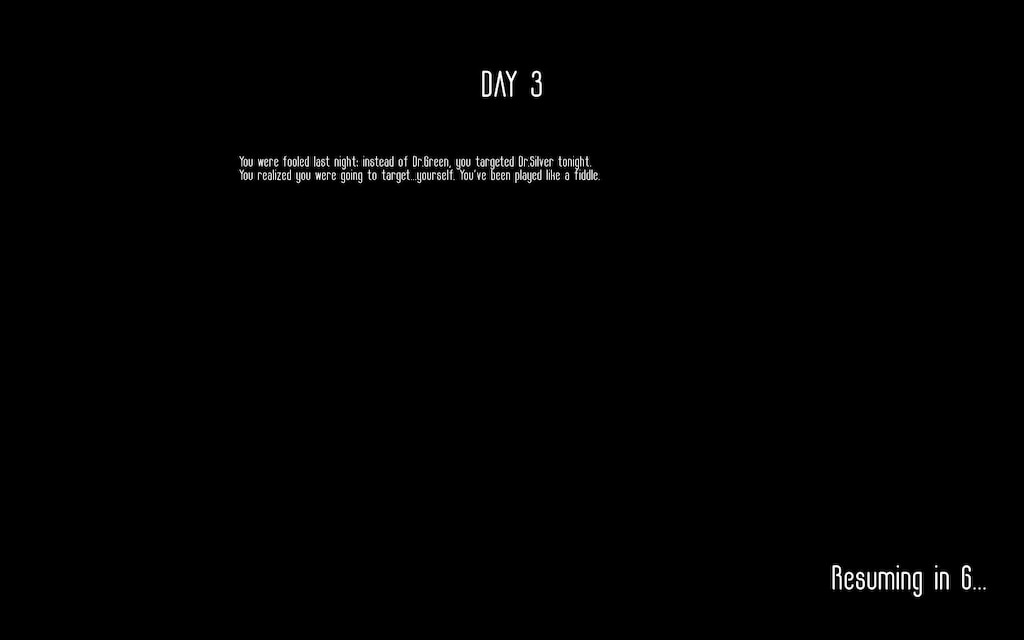 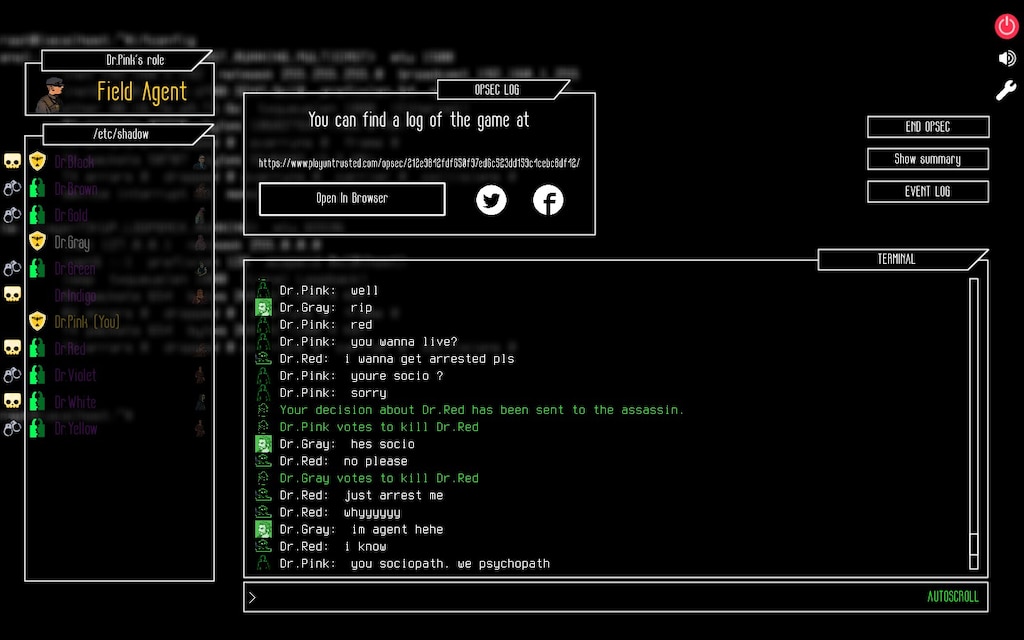 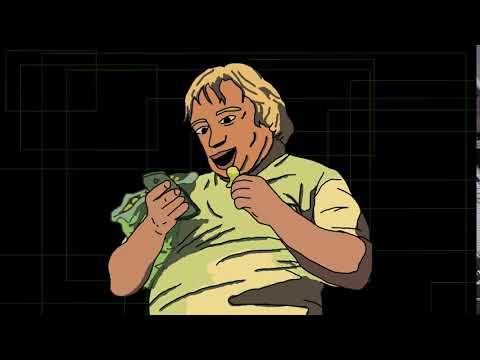 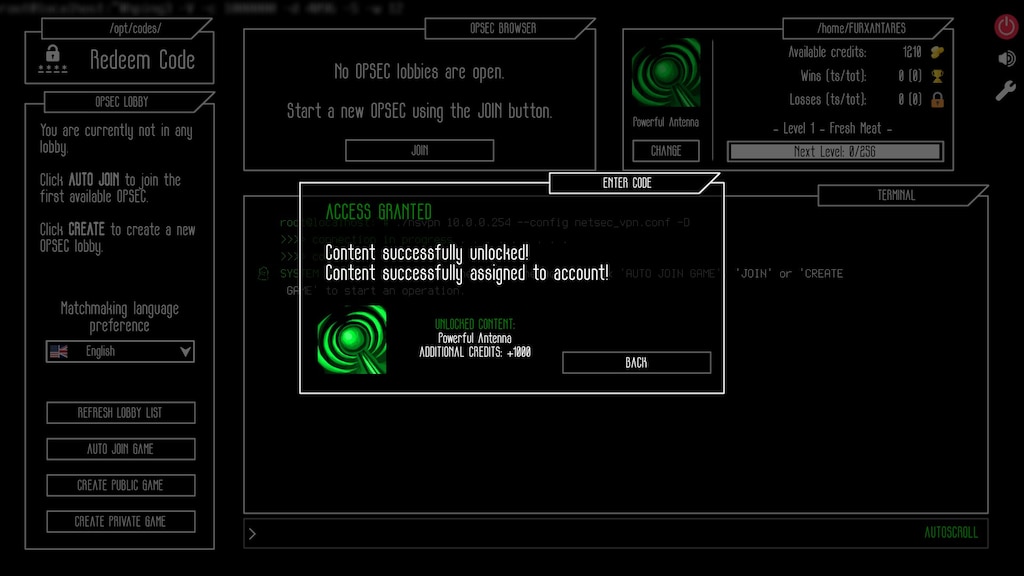 Strategy Guide for Neutrals
A basic strategy guide for the current neutral classes in Untrusted. 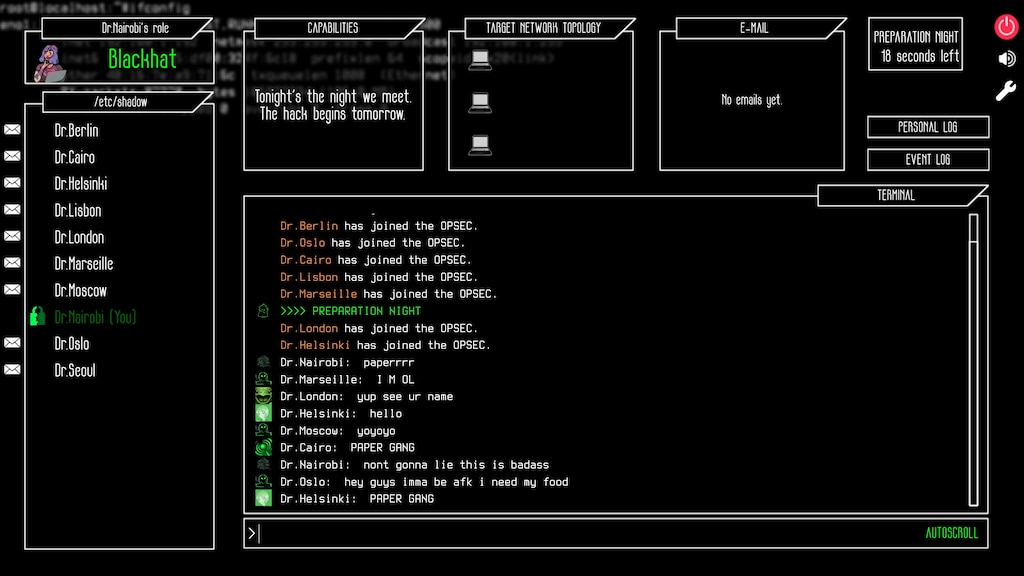 ---{Bugs}---
☑️ Never heard of
🔳 Minor bugs
🔳 Can get annoying
🔳 ARK: Survival Evolved
🔳 The game itself is a big terrarium for bugs

Yoh
May 30 @ 10:55pm
General Discussions
Bug Reports
Use this for bug reports,or post them in our discord at discord.playuntrusted.com !
31

evolvedlabs
May 31 @ 2:21am
General Discussions
bounty hunter improvement?
Thinking right now by the looks bounty hunter is just not fun to play but I want to hear what everyone has on it first
3

Not Recommended
0.1 hrs on record
Untrusted is a "hacking sim" themed "social deduction" game (as the developers call it) similar in genre to games like Town of Salem and Among Us. Essentially a group/PvP game, each player is given a secret role and must accomplish their goals by deceiving and manipulating other players.

The game is free to play and this makes it bump up a few points, but there's a few problems too. The interface is very bare bones and visually lacklustre. I understand this is because it's developed by a small indie developer, but that's an explanation for the low visual quality, not to be confused with an acceptable excuse for it. While it's free, the ugly beast of microtransactions rears its ugly head. Finally, there's the somewhat ironic way that a game called "Untrusted" seeks to harvest your email address (although you can skip this and log on with Steam).

The old saying holds true, if the product is free, YOU are the product. Stay safe out there, and keep your data private.

The developer has weighed in to inform everyone they didn't read the Developer Usage Rules for Steam "partners", or they deliberately ignored the part where Valve says "Though it may be tempting, not every review needs to be responded to."

The developer offers some shallow platitudes about their data harvesting program, while ignoring the very basic fact that none of it is necessary to play their game, but they do it anyway. Suspicious, isn't it?

The developer comments that I didn't play the game for long. It doesn't take long to determine any of the valid facts in my review. The graphics are low quality. The developer harvests user data. It's a Town of Salem ripoff. You don't need to sit at a restaurant and eat bad food for 3 hours to determine the food has gone off. If it smells, you know right away. It's a strange thing for developers to attack reviewers for basic observations like that, but with over 4,500 reviews on Steam, this is nothing new.

The developer throws a few hostile jabs which sheds a bit of light about their attitude, which isn't aligned with the wellbeing of gamers at all. My point stands, this is highly suspicious and I can't in good conscience recommend this game now that the developer has doubled down on their unnecessary data harvesting behaviour, as well as the generally low quality of this game.

I'm not trying to make Untrusted look bad. It does that all on its own.

Edit: The developer once more ignores the Steam guidelines and accuses me of slander. Nowhere in my review did I make any accusations, merely questioning the data harvesting which is absolutely taking place (the developer admits to this). The developer clearly is not a lawyer; it's not slander if it's true, and in this case if I had actually provided any mistruth that caused substantial damages to the developer, it would be libel. Slander is oral, libel is written.
Don't head into the territory of legal threats unless you know what you're talking about.

The developer harvests information from gamers (purportedly under the GDPR, but I cannot confirm or deny that). The EULA explicitly confirms this. Why did the developer both admit to data harvesting (even pointing to the EULA that confirms it) and then in the same response, deny it? It's a mystery. One side point, nowhere did I say that data harvesting is illegal. It's not. Just look at Facebook and their horrible, perfectly legal record of privacy invasion. Why would the developer immediately jump to assuming what he was doing is illegal? A guilty conscience, perhaps?

Regardless. Reviews are not about developers, whether they're ethical or not, whether they're anti-consumer or not (although we can tell a lot by this developer waving vague legal threats about "slander" because they want to silence a factual review for a bad product). Reviews are about the games. Once more, I cannot recommend this game due to privacy risks and due to the low quality of the product.
A developer has responded to this review