Store Page
Show
All News
All News
Syndicated News
Official Announcements
Arcane Waters Playtest Is Now Live-stock!
Oct 12, 2022
Batten down the hatches, this might be our final playtest before Early Access November 15th!

During the last playtest we focused on our perk system and new player experience. This playtest continues that work and takes it a step further and allows you to customize your pirate even more. Not only can you now pick a profession for your pirate, but we’ve added even more perks.

While we know the new Port Haven Academy and Perks will be exciting, don’t forget to moooove on over to your farm and chick out the new livestock options. Now, livestock can enhence your farm and give you some eggcellent goods to harvest. Yes, we know the puns are fowl, we just can’t help ourselves.

Livestock is a work in progress, so we’re looking for feedback on what you’d like to see. Just don’t forget to pet them!

The next preview window for Arcane Waters will open around 12:00pm/noon EST on October 12th and run through October 16th. Set sail with us and take our new changes out for a spin!

Since this is our last test before Early Access, we've also raised the level cap to 5!

Arcane Waters Playtest
33
5
Digging Deeper Into Perks
Sep 14, 2022
We’re sailing into another Playtest! During our last playtest we showed off the beginnings of the new perk system. This time we’re expanding them further with new perk trees and abilities. Look out gunners, it’s time to refine those skills.

Dig further into the changelog and you’ll notice we’ve added an ability to the shovel. Now you can dig for buried treasure - a requirement for any pirate worth their salt. We’re also introducing the pickaxe! Once you obtain it from the mining perk tree, you can swing into action and maximize your ore harvesting.

We’ve seen a lot of your feedback about our first time player experience. We’ve started work on the new player experience and would like some feedback. Help us test the tutorial by creating a new character and give it a try. Let us know what you think.

If you have a SteamDeck, take the game for a spin on it. We’ve spent time these last few months making sure it plays smoothly. Now you can leave home and still hit the high seas… or just farm a bit while waiting for your plane.

The next preview window for Arcane Waters will open around noon EST on September 14th and run through September 18th. Set sail with us and take our new changes out for a spin.

We’re back again with an exciting announcement.

Arcane Waters will go into Early Access on Tuesday, November 15th!
Over the coming weeks, we’ll continue to have short limited playtests to introduce new features to the community. The current playtest will showcase a sneak peek at our new “perks” system. It gives players the ability to develop specific pirate abilities. We’ll have this and at least three other playtests prior to our “opening day”, each introducing new capabilities to the game. We also plan to announce the languages the game will support in September. We’re hoping to get community input on which languages we should include. Please join us on Discord to learn more.

When Arcane Waters goes into Early Access, it will be available for purchase on Steam. Arcane Waters is not a free-to-play game. The game will be sold for a single price that will include access to all seven of the regions we’re building before we leave EA (you can see our pre-launch progress on each region on the notice board in game) and the treasures and quests they contain along with all of the perks and player progression features in the game. In the future, we may develop regions beyond the “seven continents” planned for the game to be sold separately as DLC.

For those wondering, Arcane Waters will be priced “below the price of a quality SNES game in 1990”. That’s around $20 in USD. We hope we’ll provide you as much fun as all of those games, as well.

We wanted to share a couple of additional points on how the game will change in Early Access:
Our goal going into Early Access is that core elements of the game will be complete. We will continue to expand more strategic/meta aspects of the game, expand the range of buildings and ships, add tonnes more stuff to find around the world, and complete all Seven Seas of Arcane Waters before exiting Early Access.

Arcane Waters Playtest
32
4
Arcane Waters: The Perks of Piracy
Aug 22, 2022
It’s time to set sail on another Playtest! During our last playtest we showed off the quest log and new questing features. We’re still working on your feedback from that and the player survey, but wanted you to check out something new we’ve been cooking up.

One of the most common bits of feedback we’ve seen is regarding perks. During this playtest you can test out the initial stage of our perk system. We were inspired by constellations in the night sky which pirates would use to navigate their ships. Please let us know what you think and what direction you’d like us to navigate towards.

The next preview window for Arcane Waters will open around noon EST on August 22nd and run through August 28th. Set sail with us and take our new changes out for a spin. 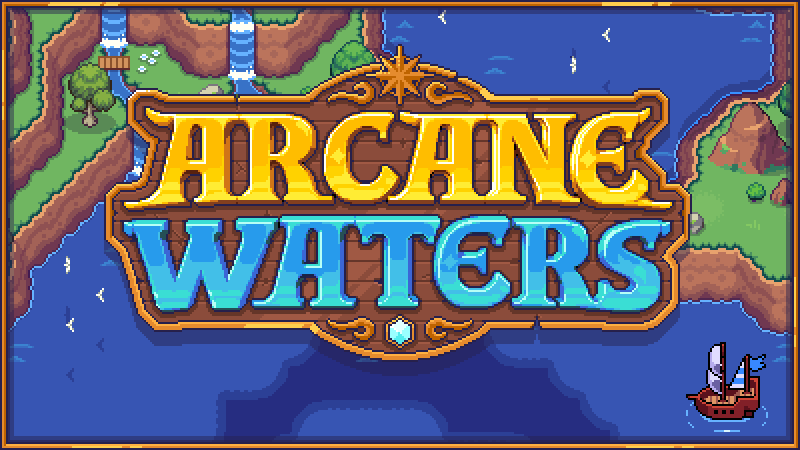 New Features & Content
There's a new perk system! Look to the skies and fill the constellations that suit your playstyle! View your perks by hitting the perks button on your inventory panel. This is still a work in progress and many more perks are coming soon!

We also have a new tutorial/introduction in the works as an ongoing effort to help new players understand the game. Previously existing characters will be prompted to try it upon login.

The team has started working on some localization for different languages. You can test the currently implemented languages in the ESC/options panel. During this phase, the translations are made automatically. We know this isn’t always ideal and will be looking for help from our community to fine tune them so they’re more accurate translations. More information on translations will be coming soon, along with additional languages.

PVP has been rebalanced somewhat to address some power run-away. Be sure to hop in a PVP match and give it a shot!

If you set sail into the open seas, be sure to keep an eye out for new locations to visit!

Arcane Waters Playtest
21
1
Playtest Survey!
Aug 9, 2022
Our Playtest period has ended and quite a few of you have harvested potatoes and explored the seas. Thank you all for checking the game out! We'd love to hear from you. Please take the survey and let us know what you think!

We're going to buckle down and get to work on your suggestions and feedback, especially what you send us in the survey above. The playtest might be closed now, but we plan to give you more opportunities to check out the game in the future before we release it into Early Access. Keep an eye out here, or sign up for our newsletter so you're informed the next time we open for playtesting. There's a lot of content heading your way and even some you may have missed. In fact, only 16% of you found one of our hidden secrets in Port Haven.

Make sure you wishlist the game on Steam and follow us so you get updates about our progress. Don't worry, we'll continue to use Discord to chat, get feedback, and provide you with an inside look.

Thank you all for your feedback and suggestions. We're really excited you have been sailing the seas with us!

Arcane Waters Playtest
34
0
Arcane Waters: Questin' and Playtestin'
Aug 4, 2022
The Arcane Waters demo sailed into Steam's Next-Fest in June. Thanks to a huge influx of players and your feedback, we were able to identify a long list of ways to improve the game, including some new features.

The next preview window for Arcane Waters will open on July 28th and run through August 7th. Sail along with us and enjoy all the changes we have in store.

We're very excited to share some of the significant changes we've made to questing. See below for the results of the "Phase 1" changes to quests available during the current Playtest. We hope to gather feedback for "Phase 2" after this playtest is complete in early August.

Be sure to leave your thoughts in our Feedback Forums[forums.arcanewaters.com] and join the discussion on Discord[discord.gg].

Quest Phase 1
Our quest system is getting some love!
Other Quest/NPC Fixes

Thanks to all of our Playtesters for sending us your suggestions!

Made biome restriction not apply to pvp maps

Made food refill next to warps to town

Bugfix for filter not working on guild rank

Bugfix for powerup not getting cleared after vorage

Fixed issue where you would be stuck with an invisible ship if you purchased a new ship in the pvp shop while dead.

fixed client side spash for projectile

Bugfix for obtained skeleton parts not getting detected for crafting

Fixed issue where lifeboat could move and shoot if you purchased a new ship in the pvp shop while dead.

Added a visual for warps that lead to town

Fixed a bug when searching for characters related to steam user

Added an icon to warp to town, Made close button flash when tutorial is at the last step

#6107 - Tutorial. If you leave Gearing Up after opening chest to do Ship Combat, you cant progress in Gearing Up. 2/6 /