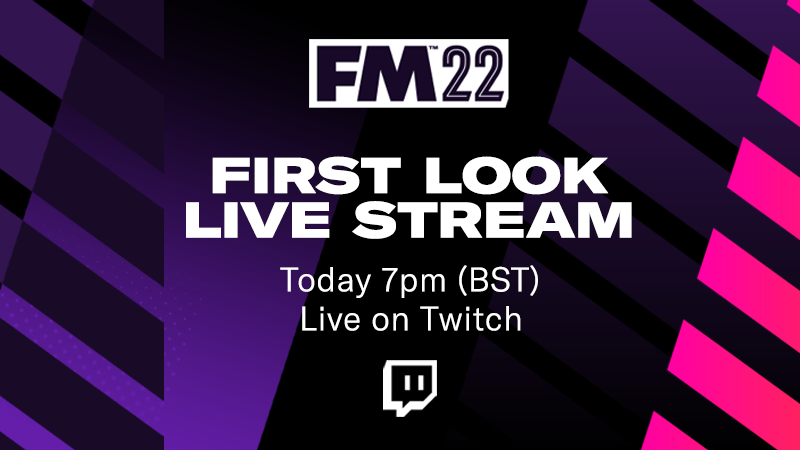 Join Sports Interactive's Dom Baker and Tom Davidson as they take us through the first playthrough look at Football Manager 2022, live on Twitch.

The broadcast will begin on the 15th October 2021 at 7pm (BST) and can be accessed via Football Manager's Twitch Channel. [www.twitch.tv]

If you can't make it, don't worry. The entire video will later be uploaded to Football Manager's YouTube Channel where you can watch it back at your convenience. Most likely early next week.

So tune in and feel free to offer tactical insights via the comments whilst two of SI's finest show the latest incarnation of the award winning Football Manager series. 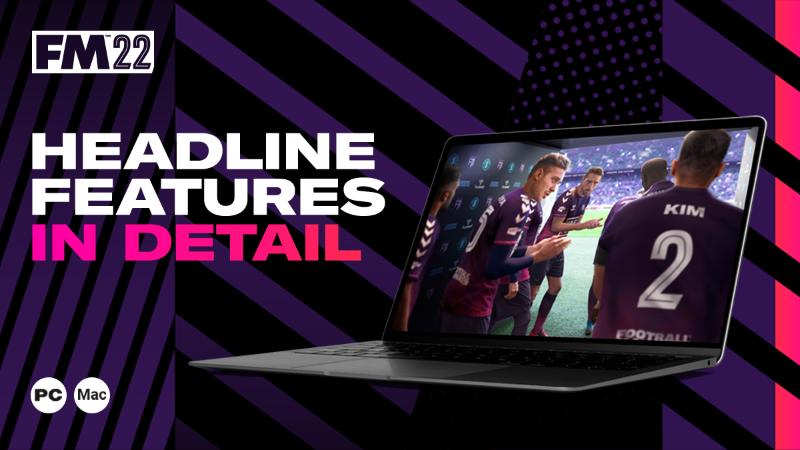 Every year the match team here at the studio seek to get even closer to creating a perfect simulation of real football. Most years there are one or two areas of the match AI, animations or overall visuals that they place an emphasis on enhancing or updating for the upcoming release. This year, however, the team have been able to implement a suite of new additions that take our match simulation to new levels of authenticity.

At the centre of all of these improvements is our new animation engine which is debuting in FM22. We’ll go on to talk about the technical details about the new engine and the different elements that have been enhanced because of it over the course of this blog but you’ll notice a vast difference when playing FM22 to the overall feel and flow of play in matches.

The new animation engine has enabled us to introduce new elements to the match engine that simply weren’t possible with the previous engine. Some of these are subtle additions that replicate the flow of play of real football, and some are larger more in-your-face changes that are felt across every match.

Let’s take a look at what makes the new animation engine so special.[www.footballmanager.com] 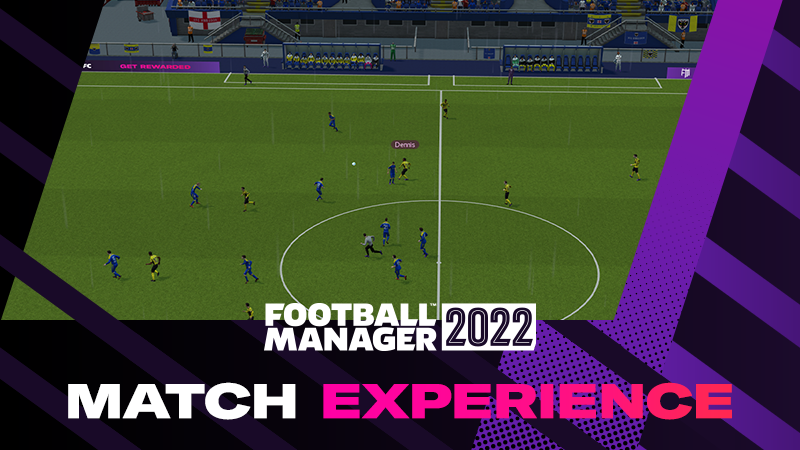 Data analysis has become an integral part of day-to-day life at football clubs across the world, fuelling the success of teams at all levels of the game. It has also become an accepted part of football culture, being as commonly discussed in the media as tactics and transfers.

Some might argue that we played a small role in making data analysis a part of football culture but, beginning with FM21, we wanted to revolutionise the level of data and analysis within Football Manager. We wanted to give you the power to harness the same metrics and reporting methods that the top clubs use to find a winning edge over their rivals.

Last season, we introduced a raft of new features around performance analysis including the addition of xG and deeper pre- and post-match analysis. In FM22, we’re introducing a dedicated Data Hub alongside some new metrics and more interaction with your team of analysts. These improvements not only allow you to view reports and key metrics but to also take more of hands-on role with analysis and shape the direction of your analysts’ work.

The Data Hub is powered by your on-pitch performances and your team of analysts now have more tools at their disposal than ever before...[www.footballmanager.com] 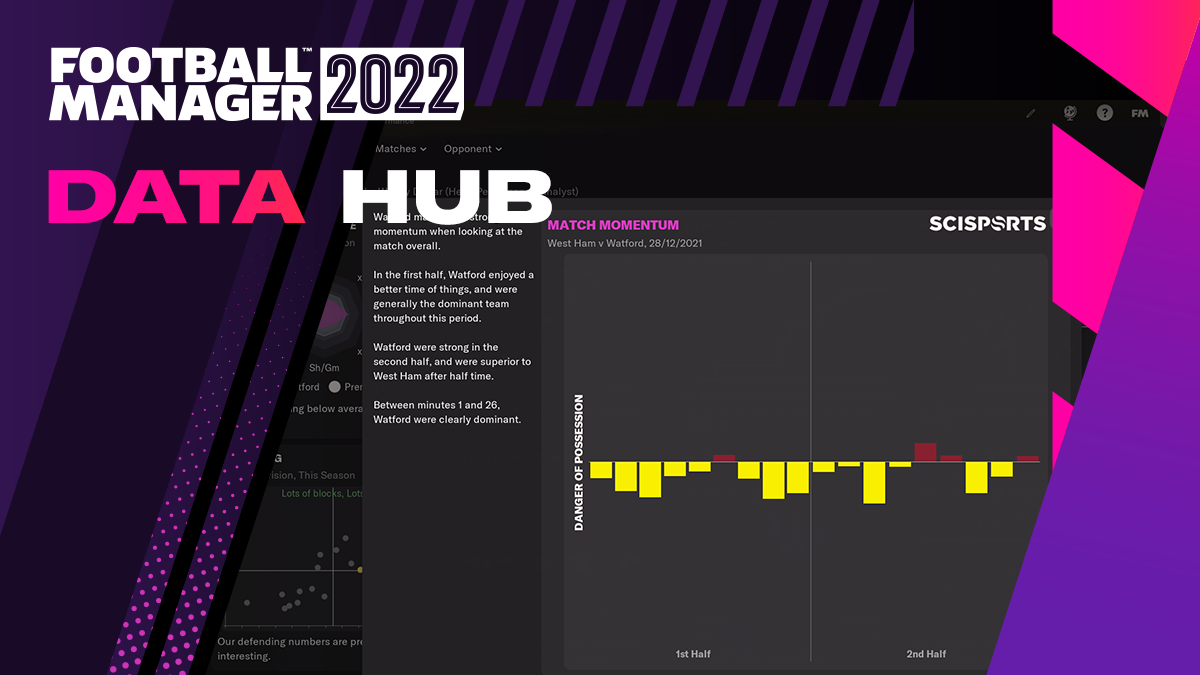 Important, regular meetings between managers and their backroom teams are vital to the smooth running of any football club.

Previous iterations of Football Manager have included these in the form of regular inbox items but for FM22 that’s profoundly changed. Don’t mistake this upgrade for a simple lick of paint – our drastic staff interaction overhaul is anchored by an all-new weekly Staff Meeting.

Numerous discussions with real-life coaches working across a variety of departments has given us a real insight into how regular these staff meetings are, who they typically involve, and the sort of things addressed to ensure that everyone is working in unison for the ultimate benefit of the playing squad.
As you’d expect, every club does things slightly differently, but the general consensus is that there’s typically one big meeting every week, featuring everyone from the manager themselves to scouts, analysts and the Head of Youth Development. That’s what we’ve modelled our brand-new Staff Meetings on.

Bringing weekly reports on Coaching, Recruitment, Player Development and Staffing together in one place means you’ll spend less time wading through inbox items in every career. There’ll be less pausing what you’re doing to deal with admin or overlooking things because you’re more focused on recruitment and matchdays. The Staff Meetings are going to be a one-stop shop for making your club run as smoothly as possible, allowing you more time to turn them into the title-winning machine you want them to be.

Let’s get into the specifics of how the new Staff Meetings work…[www.footballmanager.com] 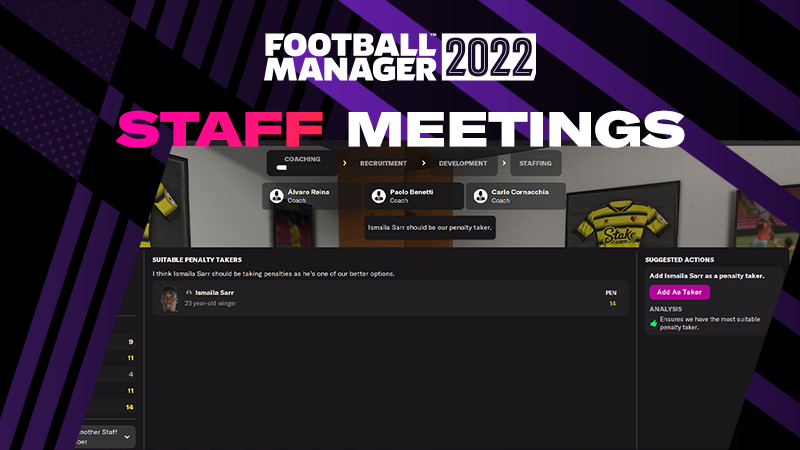 Transfer Deadline Day is one of the biggest, and most dramatic, staples in the footballing calendar.
We’ve all been there, watching the clock tick down on the big screen and waiting for one of the presenters or pundits break that news that our club is about to make a massive late addition to their squad. From done deals to rumours sparked by someone’s yoga instructor’s neighbour, we’re hooked for every minute of it.

For clubs, it’s a different beast entirely. While in an ideal world they’d have their business done well in advance, the world doesn’t work like that. Results in the opening few weeks can highlights obvious squad deficits, while players being tempted by big offers and season-changing injuries can also throw a spanner in the works. Likewise, sometimes deals materialize that are just too good to turn down.

In Football Manager 2022 we’ve sought to replicate the drama of Transfer Deadline Day, upping the immersion factor and making it an unmissable part of the game. Modelled on discussions with those involved in all aspects of the day’s madness, it’ll still feel like you’re watching the drama unfold on your television but all the while in the thick of the action, sitting in the managerial hotseat and making all the big calls.

We know how focused managers need to be to deal with the chaos of Transfer Deadline Day. By bringing all this information together in one place, it’ll be far easier for you stay on top of things and ensure you’ve got a happy squad capable of delivering those all-important victories in the weeks and months to come.

Our new, dedicated Transfer Deadline Day menu opens the door for a dramatic end to your summer business, so let us walk you through the best bits…[www.footballmanager.com] 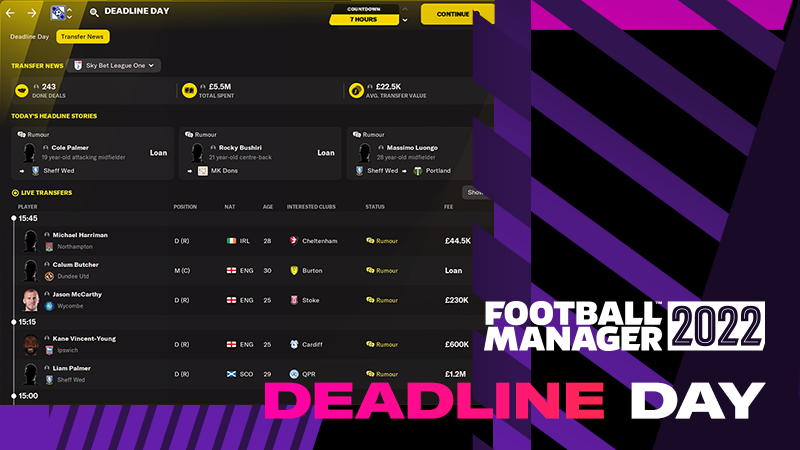 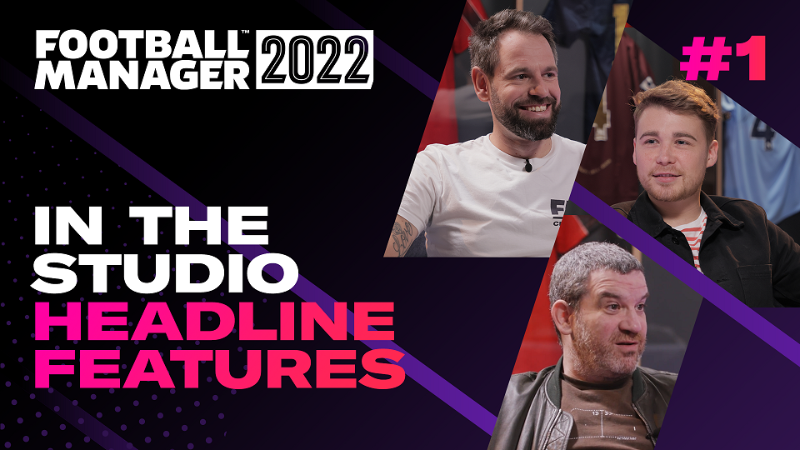 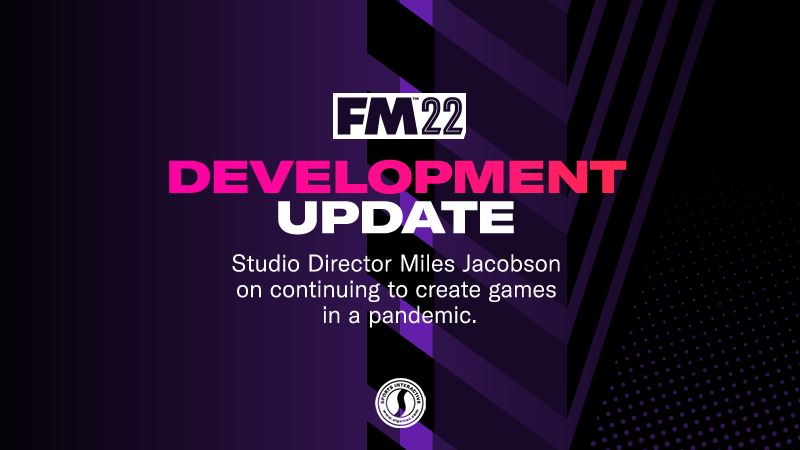 A blog from Studio Director Miles Jacobson on continuing to create games in a pandemic.[www.footballmanager.com] 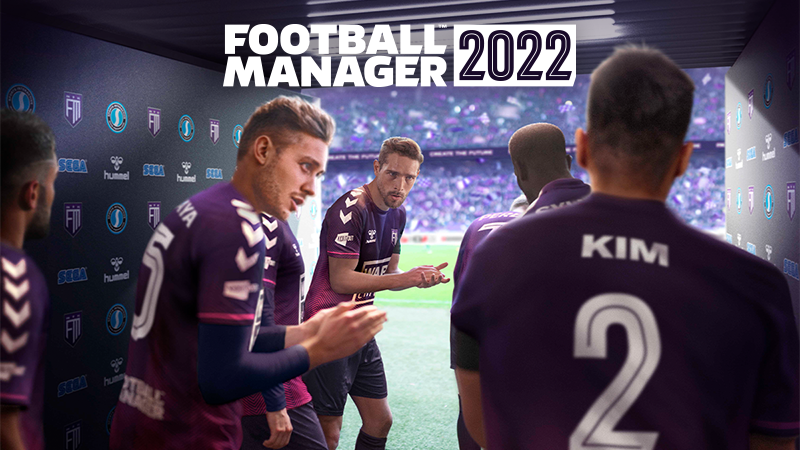 Overcome the odds and earn your success in Football Manager 2022, launching Tuesday, 9th November on PC/Mac.

Starting with FM22 on PC/Mac, new features and licensing updates will begin to be released from late September onwards across our social media channels. Join the FMFC squad[FMFC.info] to get feature details and member exclusives direct to your inbox before anyone else.

Game upgrades and a host of exciting additions across all platforms will be also be revealed from early October across our website and social media, so get following to get ahead of the game.

Managers pre-purchasing FM22 (Steam/Epic/Windows) before launch from a participating digital retailer* will net a 10% discount and the Early Access version of the game, which is typically available two weeks before the street release date.**

FM22 Mobile (iOS/Android) also steps out onto the pitch on November 9th.

FM22 Mobile should be available for pre-order on the App Store and pre-registration on Google Play from early October.

By pre-ordering FM22 Mobile on iOS, you’ll own the game and be able to play immediately upon release.

For Android users, FM22 Mobile pre-registration means you’ll get notified when the game is ready for download.

Full release details for FM22 Touch, including our return to Nintendo Switch™, are coming soon.

Earn it for the fans

Big dreams realised through craft and skill is what Football Manager is all about. Powered by new, progressive ways to impart your footballing philosophy, it's time to earn the success that the fans of your club have been dreaming of and for you to take place your place amongst the managerial greats.

*Early Access is available from SEGA-approved digital retailers[www.sega.com] only. Please check to see if the store you’re purchasing from is participating in the offer.

**Please note – The Early Access version of the game may go live at different times on different platforms. 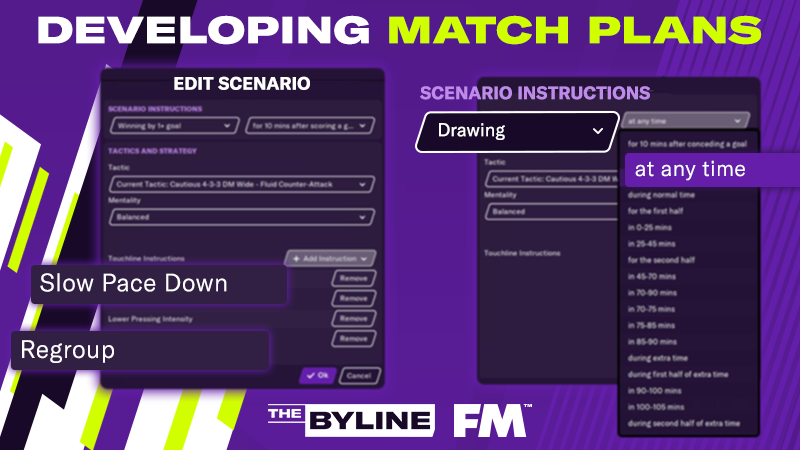 Game management has become more and more vital as the tactical side of football has taken on growing importance. Once a manager develops a revolutionary style, there will be a host of others adapting their own approaches to try and get results against them.

One of the most under-utilised, but hugely valuable features in Football Manager 2021 replicates this process - Match Plans.

Visit The Byline on the Football Manager Website[fm21.info] to see On The Break FM explains how to make the most of them. 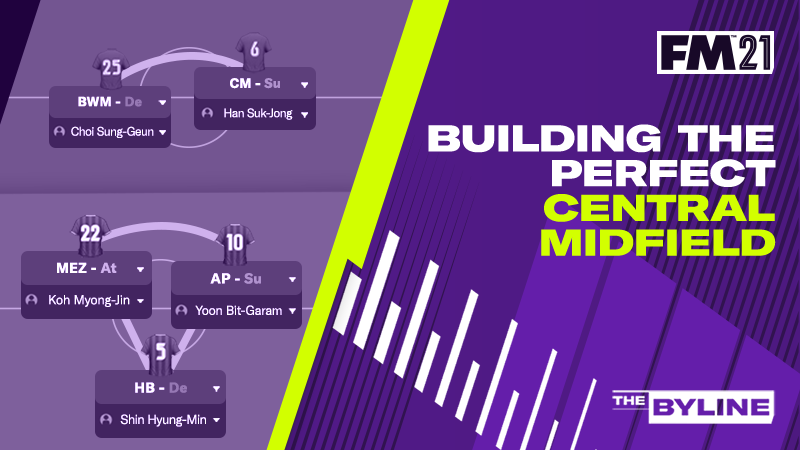 Central midfield is the battleground of this piece. It’s the area of the pitch where creativity stems, where defence transitions into attack, and where it can either go horribly wrong or wonderfully right.

In recent decades football’s brightest minds have dabbled with two- and three-man midfields, and both systems have their merits. Which is better though?

Sports Interactive's Andrew Sinclair and FM Grasshopper can’t hope to answer that, but they have done an experiment with two K-League 1 clubs to demonstrate two contrasting approaches to setting up your midfield, showing how they differ and offering insight into how the central midfielders complement your wider tactical approach.

Visit The Byline on the Football Manager Website[fm21.info] to find out how they've got on with their experiment. 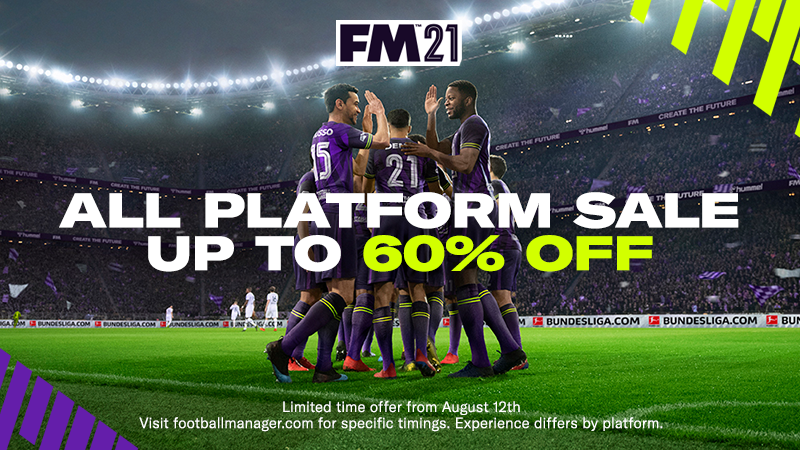 Complete your pre-season preparations and join the summer transfer party by downloading FM21, now at up to 60% off on all platforms.

The sale period runs until 6pm GMT on Wednesday 18th August, but timings vary by platform (see table below for full information).

Take the reins at your club and assess what shape the squad is in. Work out the areas for improvement before silencing your critics in style on the pitch.

Purchasing FM21 (Epic/Steam/Xsolla for PC/Mac) gets you FM21 Touch (PC/Mac on Epic/Steam), the time-saving alternative to the desktop classic that largely focuses on the managerial essentials, for free. 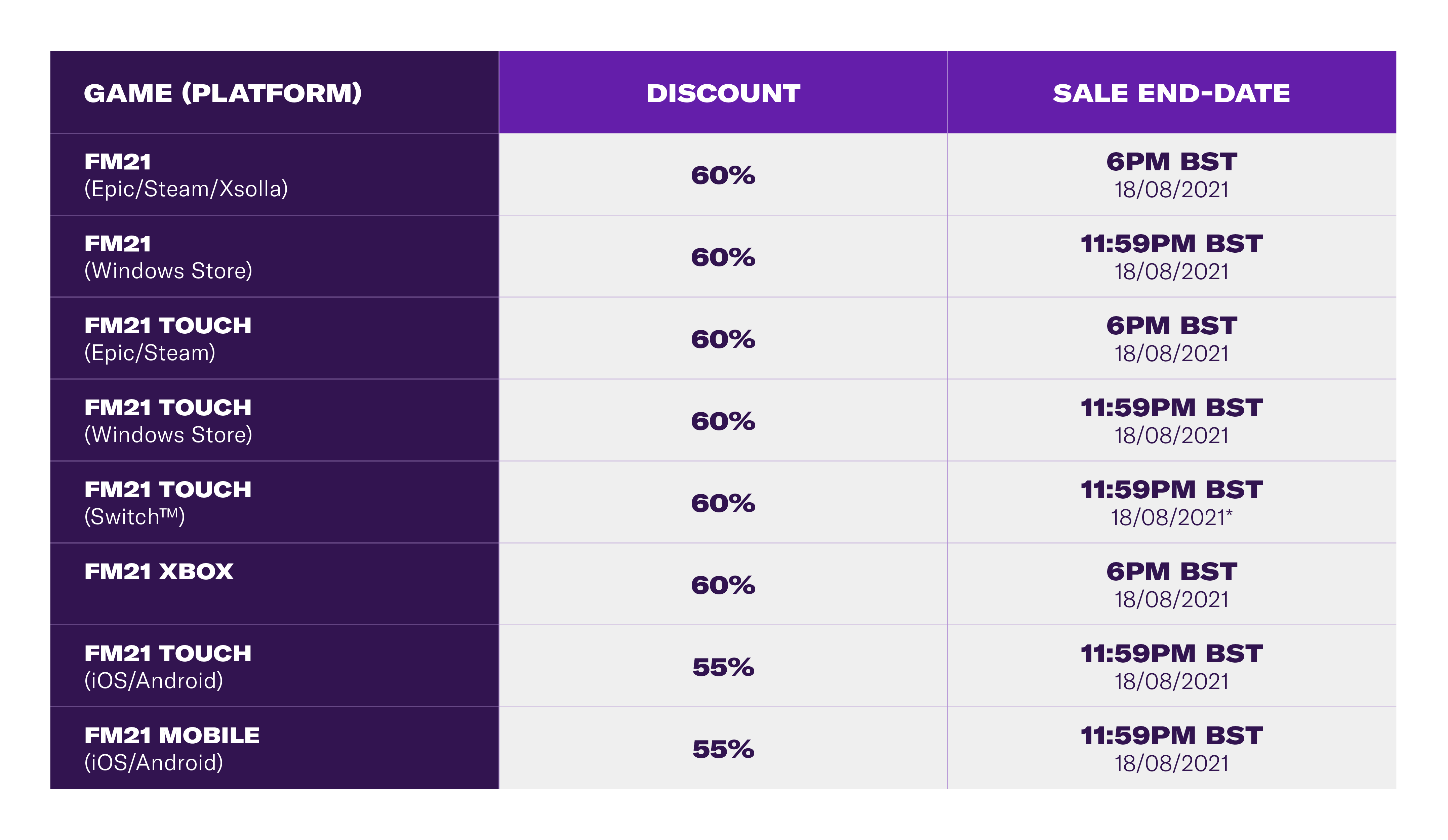 To get a better grasp on which of our games is best for you, visit our Games Comparison[www.footballmanager.com] page.
Spot next season’s stars before a ball is kicked and make the moves you want your club to make in this summer’s transfer market. 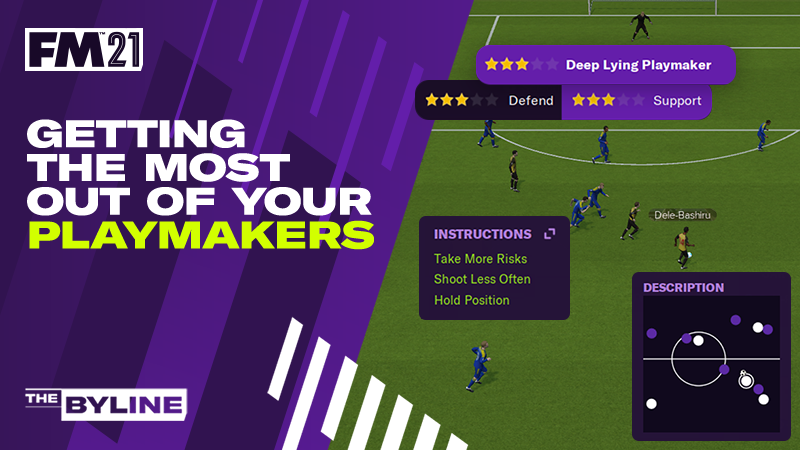 It's an eternal debate among Football Manager tactics aficionados. Is it best to use a single playmaker in your formation or multiple designated playmakers? Do you use an Advanced Playmaker, Deep-Lying Playmaker, or a Wide Playmaker? Ihor Crusadertsar will tell you that the answer is not that simple. Unsurprisingly, it all depends on your desired tactical style and what you are trying to achieve with your tactics.

Visit the Byline on the Football Manager Website[fm21.info] to see how Ihor explains how to use playmakers in your team and get maximum results from them. 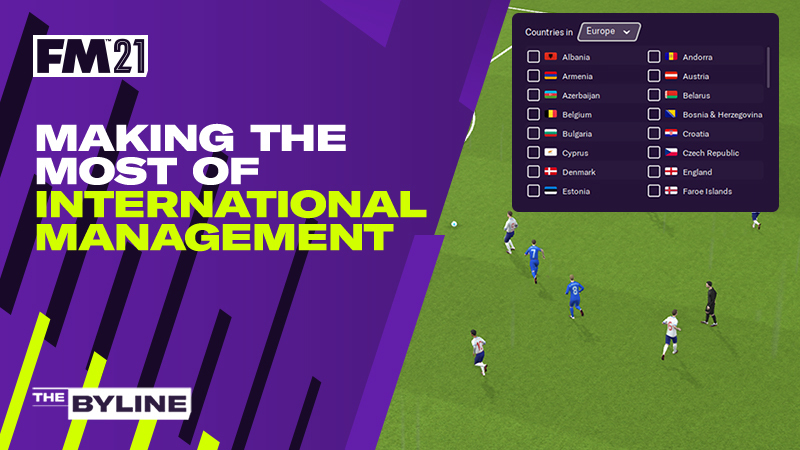 As most footballers will attest, there's quite nothing like the joy of representing your nation; every sweat-drenched shirt and every tear shed (of happiness or hurt) in the name of your country means more. Rock’s End FM breaks down international management in FM21, allowing you to lead your nation to glory and a place in immortality.

Visit the Byline on the Football Manager Website[fm21.info] to see how Rock's End FM breaks down international management in FM21, allowing you to lead your nation to glory and a place in immortality.