Welcome to another preview of the upcoming 1.4 Update. And this time it will be big because we will look at the probably most discussed mechanics of the update, the battles.

First of all, let me recap our design approach for this topic. Nebuchadnezzar always was about non-rushed city-building with a focus on planning ahead. And we wanted to preserve that.

So, how to transfer this approach to something chaotic as a battle? As we said in the announcement, there won’t be any RTS features, because we do not want to force players to rush gameplay.

We also did not want to give both players and their AI enemies a tool to overturn a well or badly fought war at the strategic and economic level by a single tactical victory. Instead, in Nebuchadnezzar wars must be fought with good planning and a strong economic base. So the strong city-builder aspect of the game will be preserved in military campaigns too.

In terms of visuals and controls, we wanted the fights to resemble real battles so we decided for a form of battle abstraction using two fronts and flanks.

As you can see in the image, the battle screen is divided into several army slots. The left and right columns represent the flanks, the middle column represents the center of the battle line. The upper and bottom rows represent back lines and the middle rows are front lines.

Battles are turn-based. At the beginning of each round, both players (human player and enemy AI) can move their companies. They can be moved within a single row or from back line to front line. However, in each round, the company can be moved by one slot only.

Then the round is evaluated. Companies fight with each other based on their slot and type. And then the new round then begins. That means there is no turn order and the actions of both players are symmetrical. During the setup phase, each player sees only the army deployment from the end of the previous round.

The goal of the battle is to wipe out the enemy center front line slot (representing the collapse of the battle line) or to destroy any of three wall sections in case of the siege of a fortified city.

So what is the point of the flanks if the main target is mostly the center line? Quite big. Because if a front flank is destroyed, it cannot be used by the enemy anymore and the player can then attack from his flank to the enemy center with a huge damage bonus.

Currently, there are six different companies. Each is recruited from a specific social class within the player's city. So there is a great connection between economy and warfare and yet the player still has the option to adjust the composition of his army to suit him.

Some companies are great for range attacks from the back line, some are strong in the front line, and some have even additional flanking bonus when attacking from the flanks to the center. Some are needed to destroy enemy walls. Good army composition and following battlefield deployment are thus critical for winning any battle. 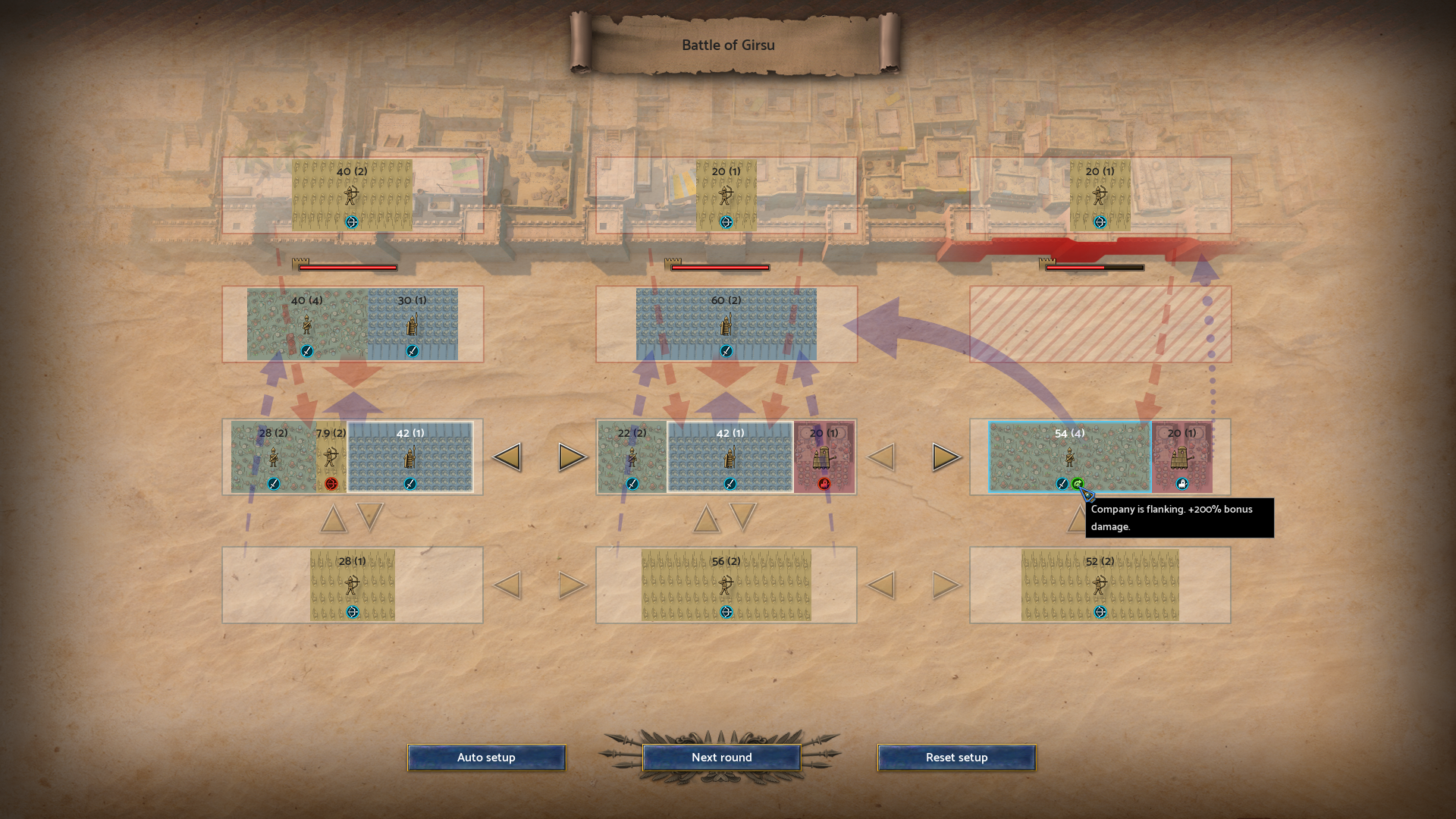 And welcome to the second preview of the upcoming 1.4 Update. Today we will look at barracks UI and we'll get a partial look at how the military will operate.

Each barracks can accommodate a single military company. These companies are indivisible units that will take part in battles. We will talk more about battles in future posts.

Morale is gained by supplying companies with various food. In battles, it has a vital role because it determines if the company can continue fighting. If the morale drops to zero, the company will flee from the battle.

Experiences are gained in battles and players have to continuously supply companies with military goods to prevent experiences from declining. If the company gains enough experience, it advances to a higher level and gains an attack bonus.

The total number of soldiers is limited by population size, where each type of company depends on a specific social class. Players also have the option to name each company.

So, this was the first peek at the upcoming 1.4 Update war and military mechanics. We will introduce the other soon. Stay tuned and follow us on Facebook[www.facebook.com], Twitter, Reddit, Instagram[www.instagram.com]. You can also join our Discord[discord.gg] server! 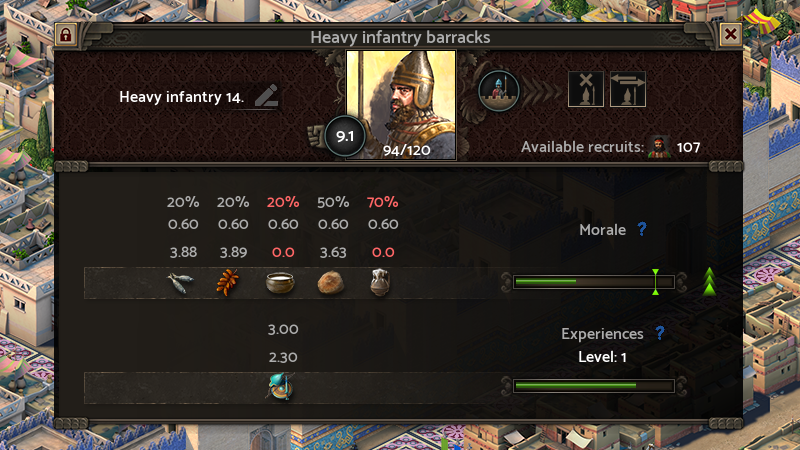 And welcome to the first preview of the upcoming 1.4 Update. Today we will look at the long-awaited feature, the walls.

Wall's primary function is to improve defense in the event of an attack on the city. Nevertheless, they will be available in peace missions too to allow you to enhance the appearance of your city.

Currently, we have two different visuals for walls, as you can see in the image, and three types of gates. We may add more before the release. 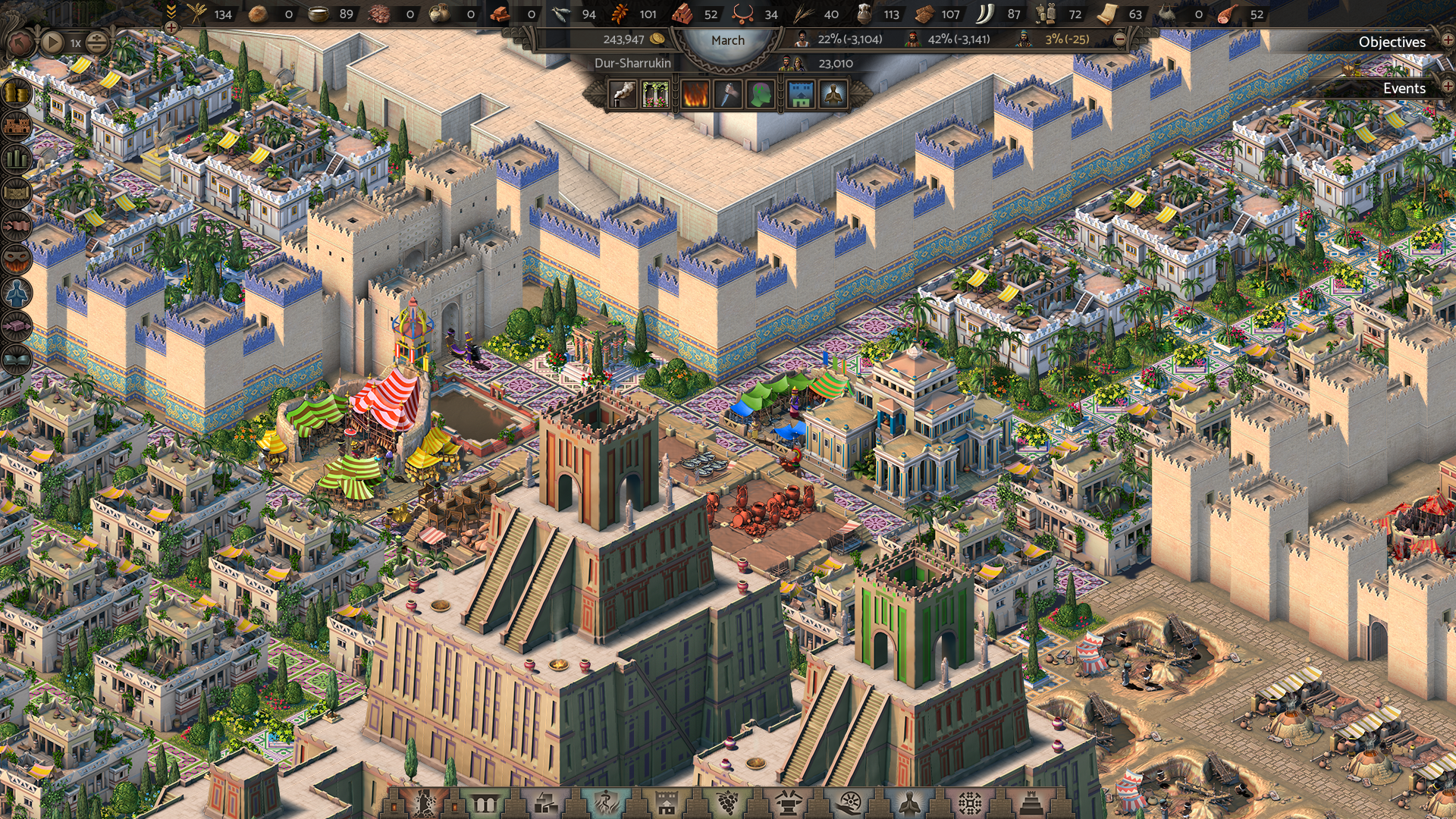 At Nebuchadnezzar, we have always emphasized history. And since wars played an irreplaceable role in the history of ancient Mesopotamia, we think they should not be missing in the game. War will therefore be a major addition in the upcoming 1.4 Update.

It will include the following:
On the other hand, Nebuchadnezzar has always been focused on economics and logistics. And we want to preserve this, so the design of war will be done with this in mind.

Because of that we have decided not to add any RTS mechanics. Your city building and city management skills will still be the most important. Now you will also have to take care of the security of your city against external threats. But on the other hand, you will be able to take advantage of the benefits that a strong army brings.

The Adventures of Sargon DLC
In addition, the first DLC for Nebuchadnezzar will be released together with the 1.4 Update.

In this story-focused DLC, you'll play as one of the most famous rulers of ancient Mesopotamia, Sargon II, and relive all of his important campaigns and achievements.

Suppress dangerous rebellions, conquer the surrounding empires and ultimately restore the glory of the Assyrian Empire.

We are super excited about his new content and ready to bring you more news in the future. So stay with us and follow us on Facebook[www.facebook.com], Twitter, Reddit, Instagram[www.instagram.com] or join our Discord[discord.gg] server! 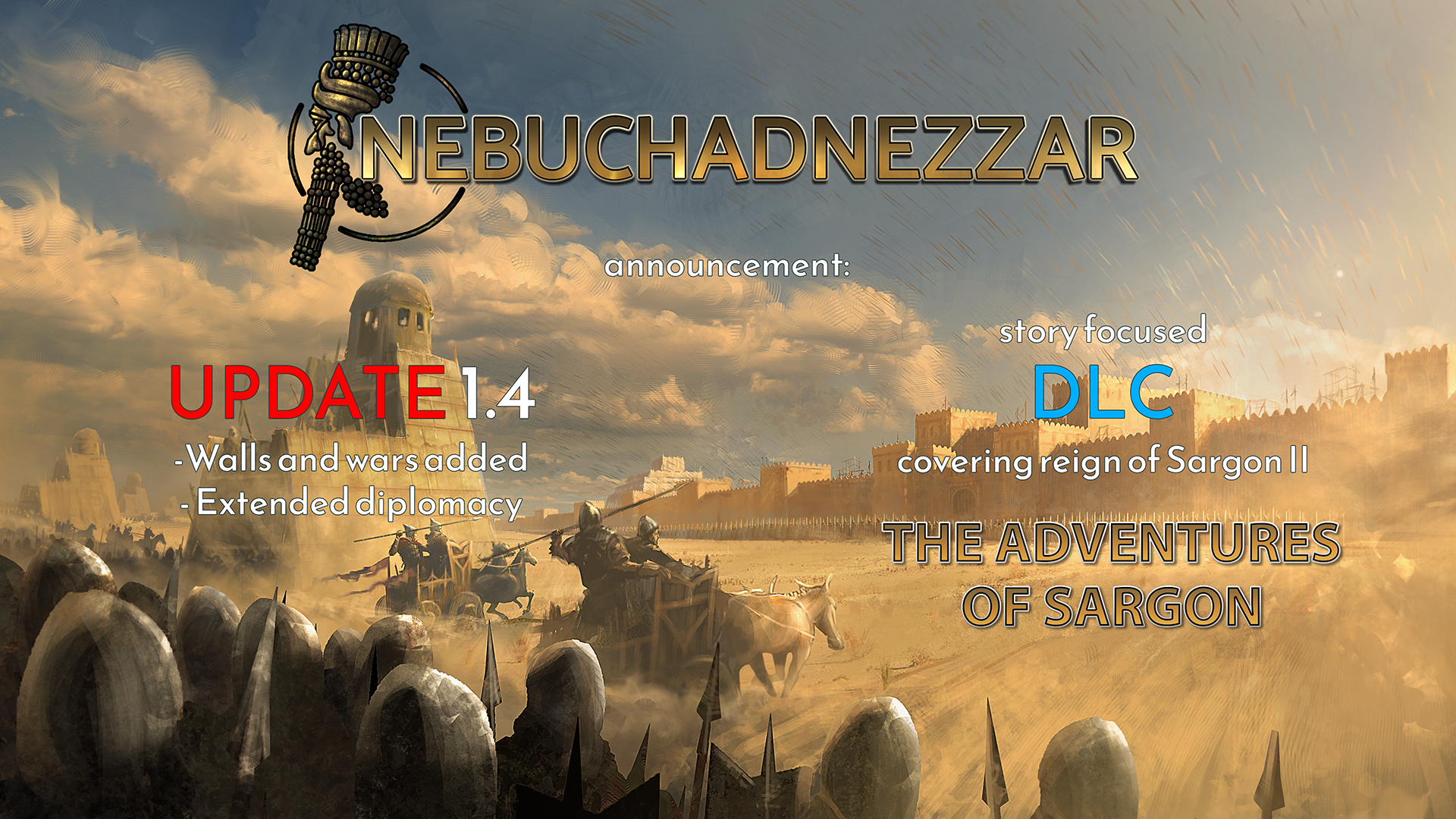