This is an Open World Roleplaying game set in a fantastical desert.The world has descended into darkness and chaos after the Battle of the Blood Moon. Take control of different characters and come up with your own strategy to shape the future of your world.
$14.99
Visit the Store Page
Early Access Game
Get instant access and start playing; get involved with this game as it develops. Learn more.
Most popular community and official content for the past week.  (?)
Update Log 2-19
Feb 19
Hi folks! Here are the main updates: Added funtion to check for NPC location; Fixed an issue where NPCs would automatically return to the first city; New MOD development functions added; Bugs fixed.
Feel free to contact us through indie@xindong.com should you have any questions!

·Optimization
- When players drag and drop their heroes to a location in the garrison interface, they will also set their locations to this location, so that they will not automatically return to the original location next day (heroes with the identity of the city master and above are invalid)

- Now you need 120 inheritance points to unlock The Unknown Swordmaster .

- Players can see their own forces in the intelligence interface or see the cities and current locations of all NPCs under other forces if they have the relevant talent.

- In the MOD management interface, when there is a problem with the selected mod, it will prompt an error and cannot be closed if players try to close the interface.

- The HERO_UPGRADE and HERO_SET_STATU instructions have been extended to support all NPCs in MOD development.

- A "Professional Resource Reference" button has been added to the MOD development interface.

·Bug fixing
- Fixed an issue that could cause all units to get stuck in battle after the previous update.

- Fixed an issue where the stamina would keep recovering when the game is paused.

- Fixed an issue where Guzaka runs on his back in the 'Guzaka of The Double-Moon Valley' mission.

- Fixed the Fire Bullets movements of the Lava Treasure and reduced cooldown time of the skill.

- Fixed an issue where battle could not end when AI fights at a location of an empty force.

- Fixed an issue where siege is still allowed when attacking a location, but instead of siege, only friendship will be reduced after actually click on 'Siege'.

- Fixed an issue where units of the same force would attack other units under their force.

- Fixed an issue where you could recruit lords in the garrison interface when you became a lord of a certain force.

- Fixed an issue where the debug box of the MOD development interface may report an error.

- Fixed the problem that when using the map of a MOD, the mini map would be blank.

- Fixed an issue where it is unable to run under the current environment of developing MOD configuration table when click on the skill editor in the MOD development interface.

Sands of Salzaar
25
58
Temporary and VERY VERY Alpha stage English mod
https://steamcommunity.com/sharedfiles/filedetails/?id=2002720429 Don't expect too much or you'll be very disappointed. It may still help you playing the game. New updates coming ASAP. You can help improving the mod if you've got a little time. Come vi...
14

-The attack direction in battle can now be targeted. (The default shortcut is "A")
-Animals can be purchased from the caraven

-Removed the original MOD sound table (note: it may cause the audio attached to the MOD to be invalid)

-Fixed the game frozing bug at the creek cave

-Fixed main mission countdown after 150 days where it still remains to be 30 days.

-Fixed an issue where high-level NPCs would not update their own equipment.

-Fixed an issue that could cause combat effects not to disappear and display abnormally in the scene.

-Fixed an issue where the map editor in the MOD development interface would not correctly reload data in the current mode.


Note: As this version adjusts the audio-related configuration, the audio included with some mods may be invalid.
Note: The professional MOD project is still in the testing phase, feel free to contact us if you encouter any problems.:)

Sands of Salzaar
37
142
Sands of Salzaar Feb 14th Update!
Feb 13
Hello everyone! We are back and ready to release our first update after Lunar New Year! We have reworked the in-game notice systems and finally added the merchant tent feature. Make sure to stop by and check out some pets! Also, we've fixed some of the model collision, movement issues and optimized the game for better frame rates.

The new characters, new features and new content we mentioned will be added into the game in February continuously. We are also trying our best on fixing the existing issues if you happened to encounter any new issues or you got some great ideas for the game, feel free to contact us! （indie@xindong.com） 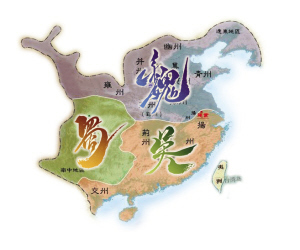 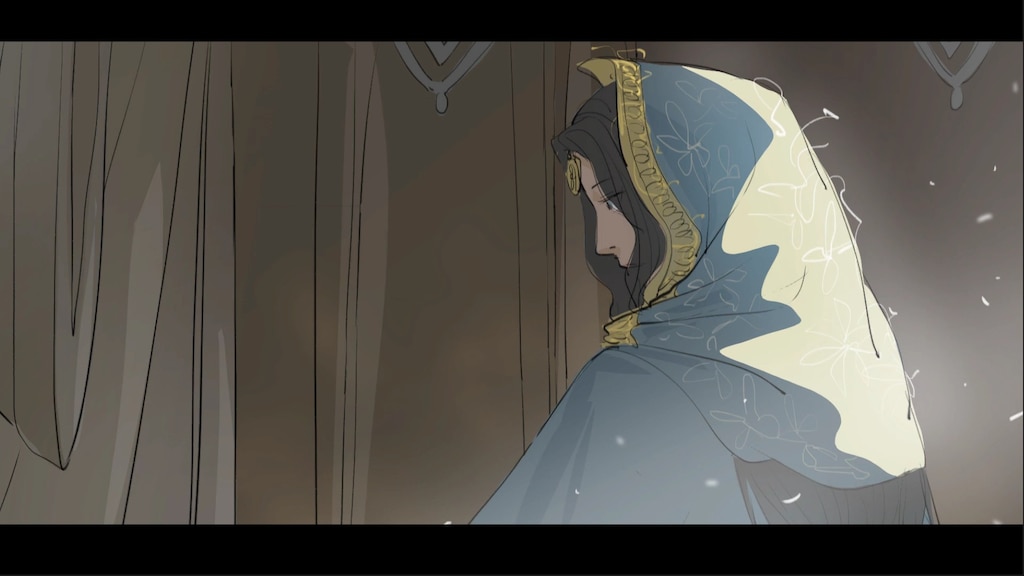 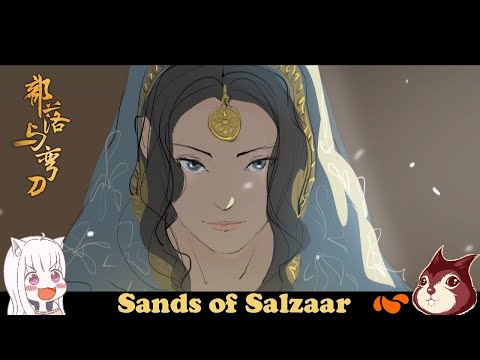 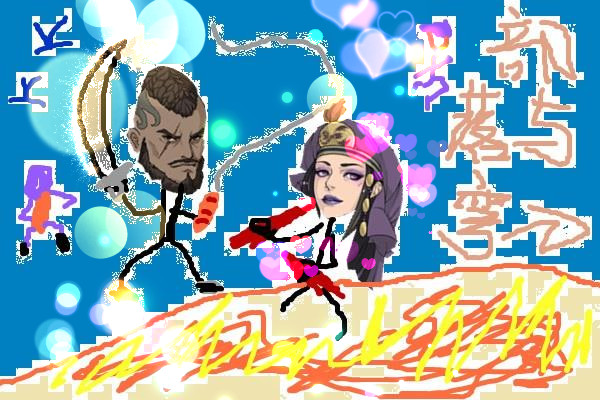 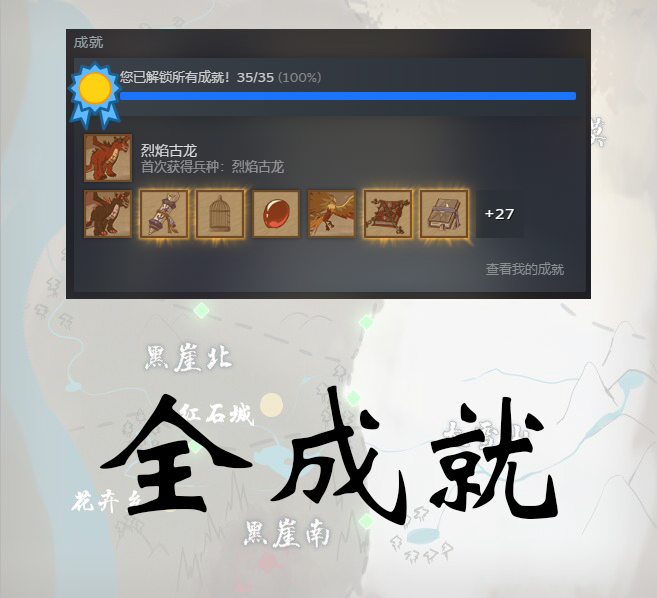 特殊部队monster
打败boos后，你能得到部队或者装备，如果你失败了，不能再次挑战 After defeating boos, you can get units or equipment, and if you fail, you can't challenge again
6 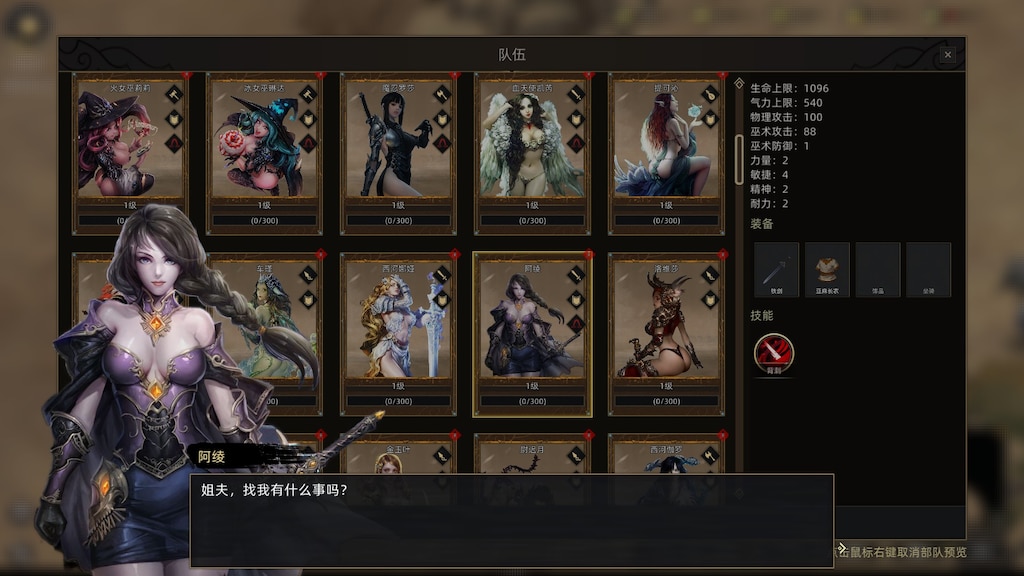 Recommended
16.0 hrs on record
Early Access Review
I couldn't resist the temptation to get this game even if there's no english translation yet... playing with google app trying to translate text via mobile camera which is really tedious and has some funky funny translations but at least i can make out the outline of the story so far.

Please add the english translation... or if a gentle soul wants to make a fan translation, much appreciated. 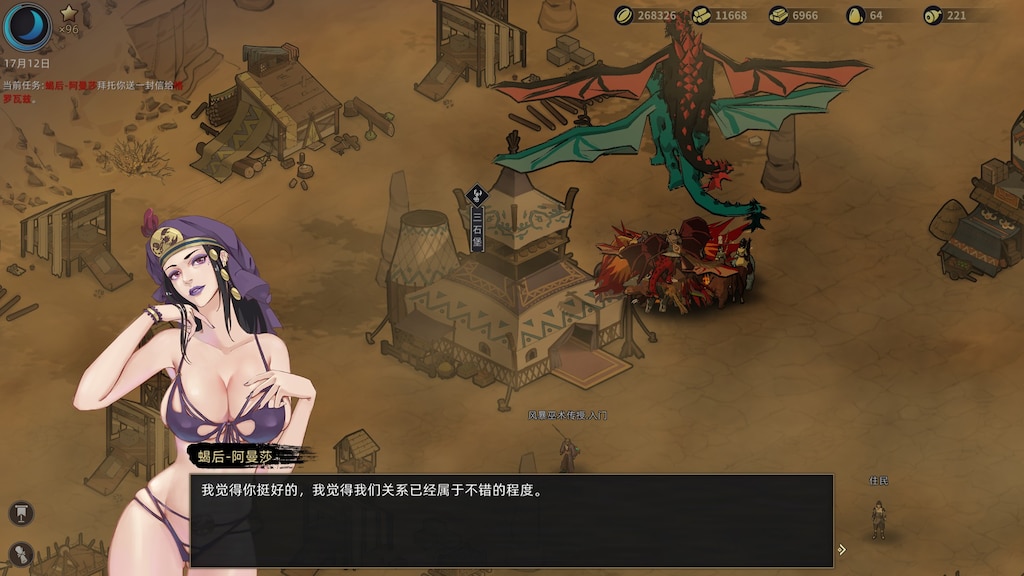 This is an amazingly fun game, played 4 hours non-stop even though I didn't understand jack **** because of the language barrier. There is so much to do! So many places to see, waaay too many units to upgrade. It is amazing fun to explore and fight. I need language patch, I NEEED IITTT! 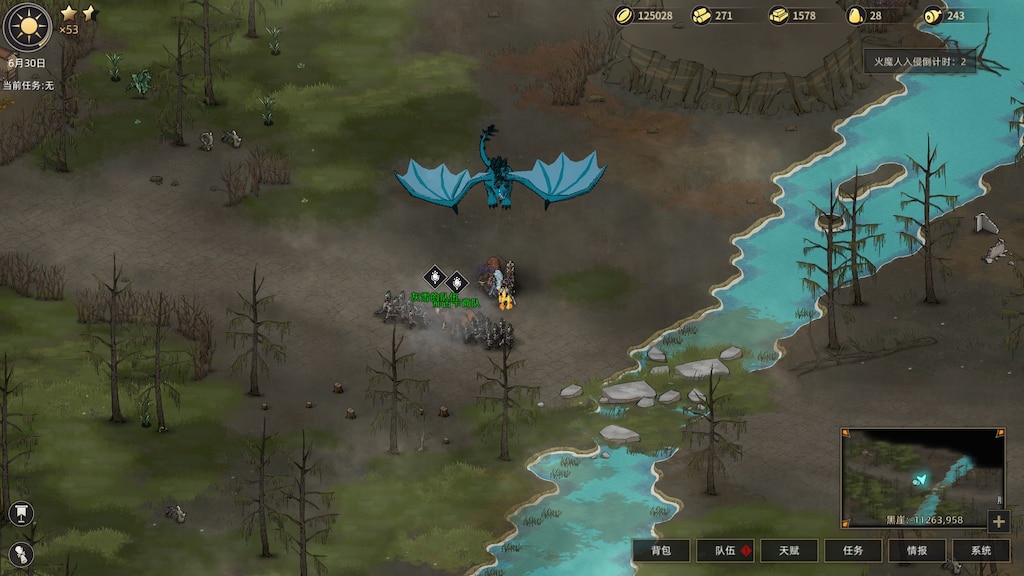 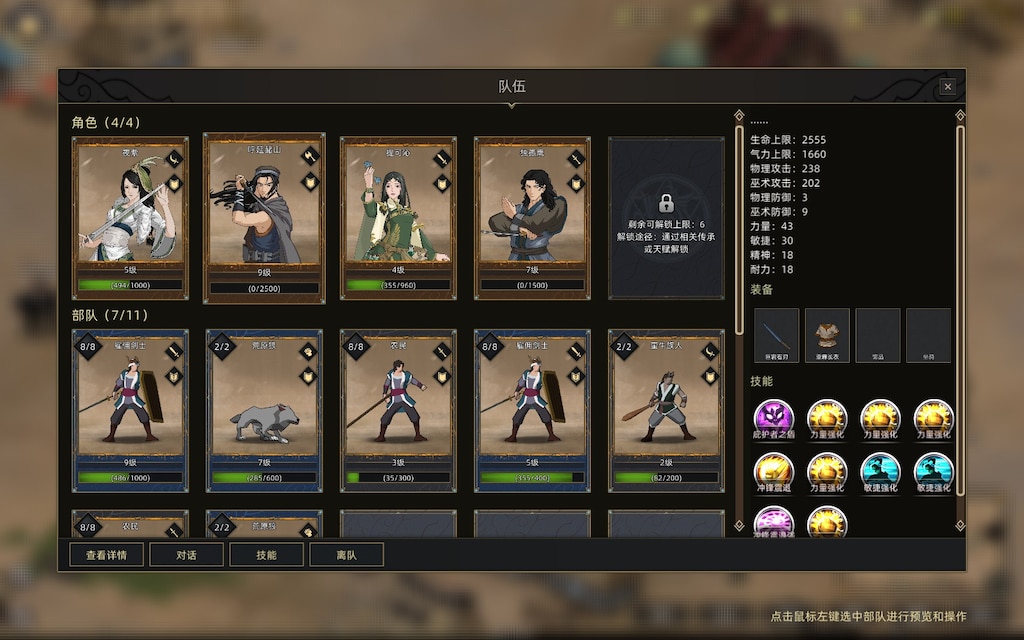 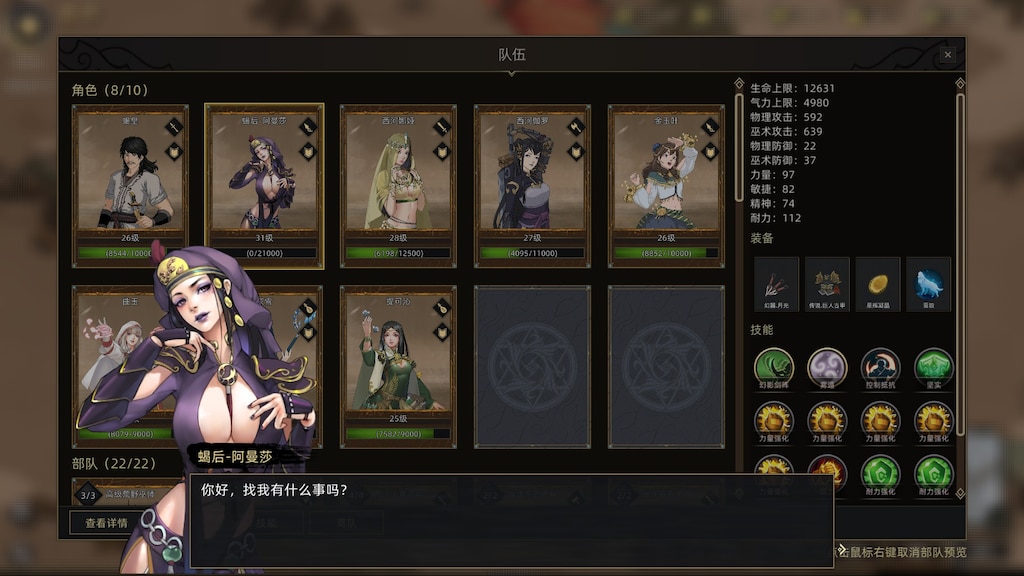 Omni
View all guides
「部落与弯刀」Q&A 遇到问题请看这里
如果遇到任何与游戏有关的问题，请参考以下Q&A，或加入我们的问题反馈QQ群： 967778598 ，戳管理员“bug反馈可以私戳我”。 If you encountered any issue, please check out the following Q&A. Or send your issue ...
95

Jejeas IX
319 products in account
0
[GUIDE] Fast English translation
This method is completely free, and it will make playing easier until translation is done. We're gonna be using this translation program QTranslate, which uses OCR to translate stuff quickly right from the game screen. Here is what you will need...
15 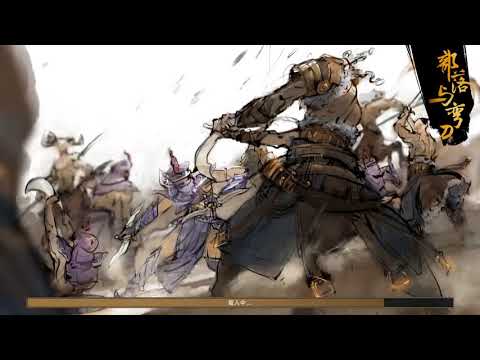