Between now and April 2nd, you can pick up the Arma 3 base game, Arma 3 Apex expansion, and all other Arma 3 DLC or expansions, with mega discounts of up to 70%.

To experience everything Arma 3 has to offer – or if you're simply looking to complete your Arma 3 (DLC) collection – check out the Arma 3 Ultimate Edition (click here), and receive an additional bundle discount.

Here's a handy overview of the individual items on offer:

For even more in-game assets, scenarios, mods, and other types of content, do also visit the Arma 3 Steam Workshop, where you'll find 70,000+ free Workshop items shared by our talented content creators.

To get in touch with other members in our community[/b], you can always jump into the Arma Discord server[discord.gg], head over to the /r/arma subreddit and Bohemia forums[forums.bohemia.net], or join one of thousands community groups via Arma 3 Units[units.arma3.com].

Enjoy the weekend – take care, stay safe, and see you all in-game! 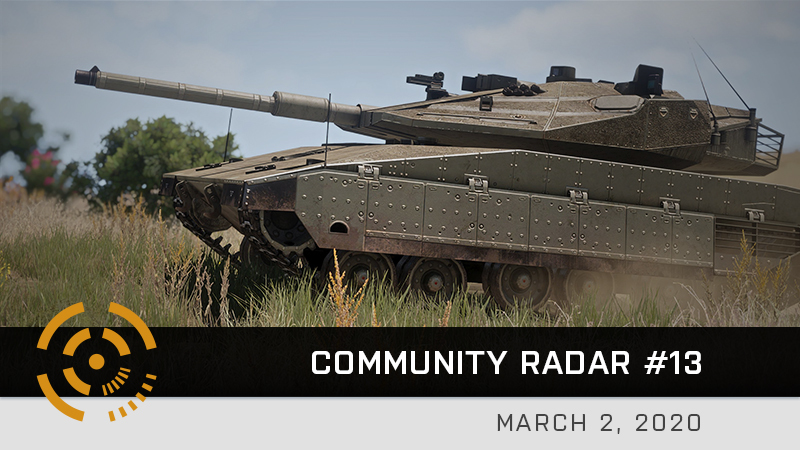 [arma3.com]February flew by like Cupid's arrow! Let's take a moment to look back on all the new exciting things that happened around the Arma 3 community last month! 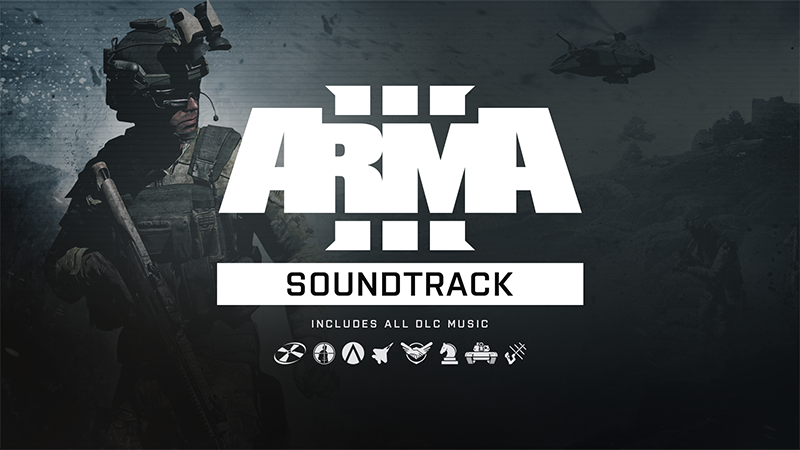 Listen closely! The original soundtrack of Arma 3 is now available for the Steam Soundtrack Sale! Featuring all 100 original songs, listen to over 3 hours of splendid Arma music.

Grab it now with a 30% discount until February 14: 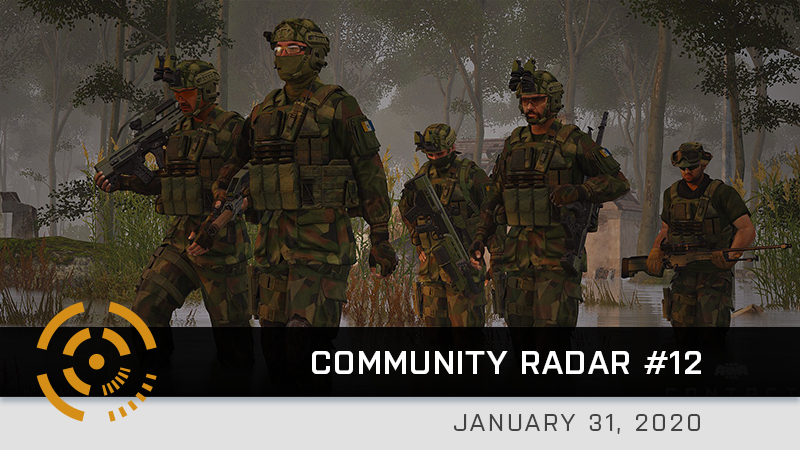 [arma3.com]New year, new Community Radar! See what's been happening already in the first month of 2020 and the latest activities around the #Arma3 community! 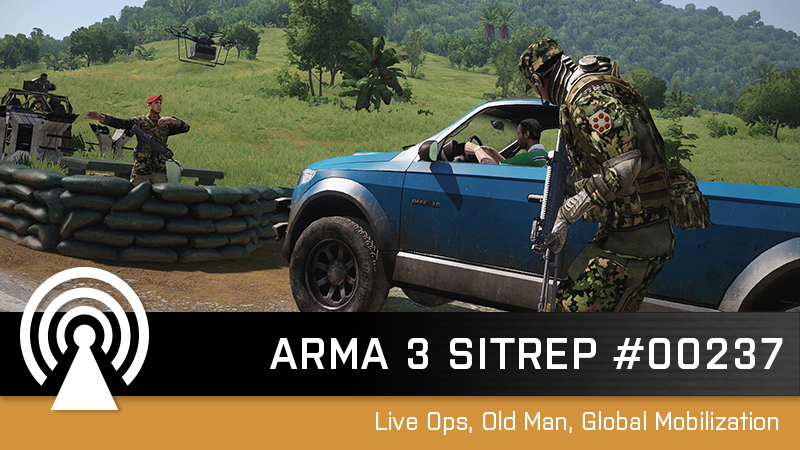 Arma 3
45
572
Arma 3 Steam Free Week starts today
Jan 14
We're excited to announce an immediate Free Week for Arma 3 on Steam, starting today, January 14th (10 AM PST), and ending on Sunday, January 19th (10 AM PST). To play Arma 3 for free, you can simply visit the Arma 3 store page on Steam, and fire your mouse left-click at the green "Install" button.

To continue playing Arma 3 after the Free Week has ended, you will be able to seize a massive 70% discount on the Arma 3 base game, and/or enjoy savings of up to 66% on Arma 3 DLC packs and expansions until January 20th. When purchasing the Arma 3 Ultimate Edition (complete-your-collection bundle), you will seize an additional 15% bundle discount on top.

During the Free Week, all Steam users will have free access to the Arma 3 base game plus the Arma 3 Apex expansion. This also includes Arma 3's full "The East Wind" singleplayer campaign and the "Apex Protocol" co-op campaign. New players might also familiarize themselves with the game's controls via the "Prologue" tutorial campaign.

Have a great week! 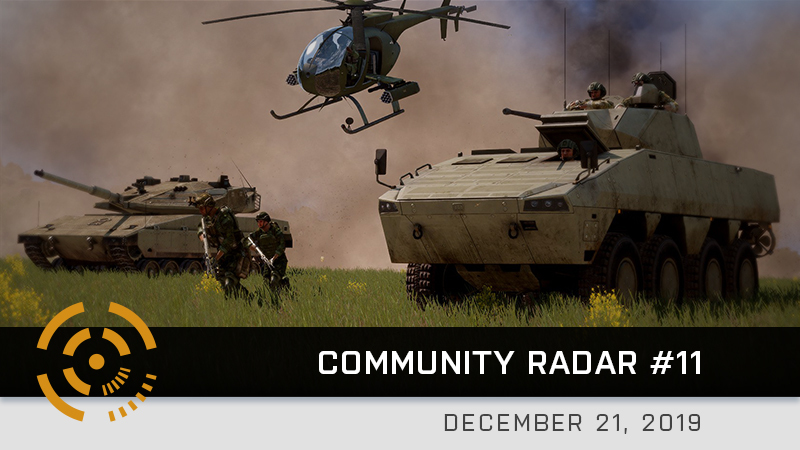 [arma3.com]A new Community Radar has just been placed in your winter stocking. Come read all about what the Arma 3 community has been up to recently!

More information in the full changelog[forums.bohemia.net] 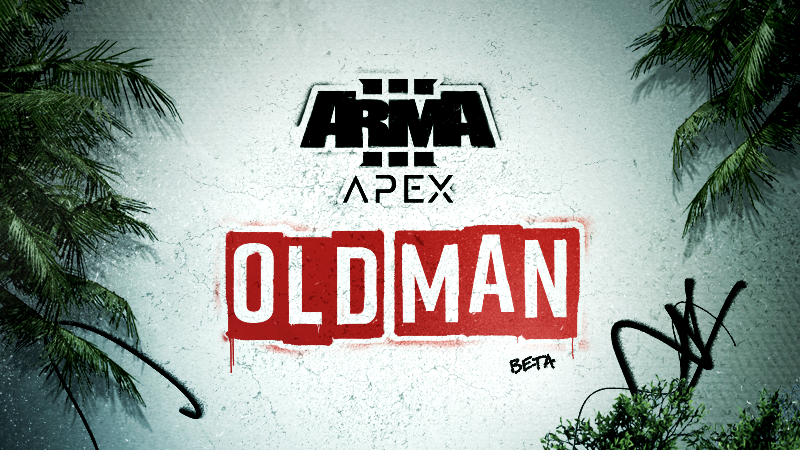 Just before heading into the winter holiday break, our developers still have one surprise for you in store: the beta version of the Arma 3 Apex: Old Man open-world singleplayer scenario is now available on the [url=https://steamcommunity.com/sharedfiles/filedetails/?id=1938939381
]Steam Workshop[/url]!

https://steamcommunity.com/sharedfiles/filedetails/?id=1938939381
Arma 3 Apex: Old Man is free for everyone, but since the scenario takes place on the premium Tanoa terrain, it does require players to own the Arma 3 Apex expansion. By distributing the beta version via the [url=https://steamcommunity.com/sharedfiles/filedetails/?id=1938939381
]Steam Workshop[/url] as an optional download, users do not need to switch to Arma 3’s Dev-Branch to participate in its public beta testing.

The story of “Old Man” is set within the shared universe of Arma 3’s “The East Wind” and “Apex Protocol” campaigns (a.k.a. the Armaverse). You play as a retired Legionnaire living on the South Pacific island of Tanoa. When a new strain of malaria causes yet another humanitarian crisis, and local authorities fail to distribute an effective vaccine to the civilian population, you’re tipped off about a possible plot. Together with a former military contact, you set out to uncover the truth. 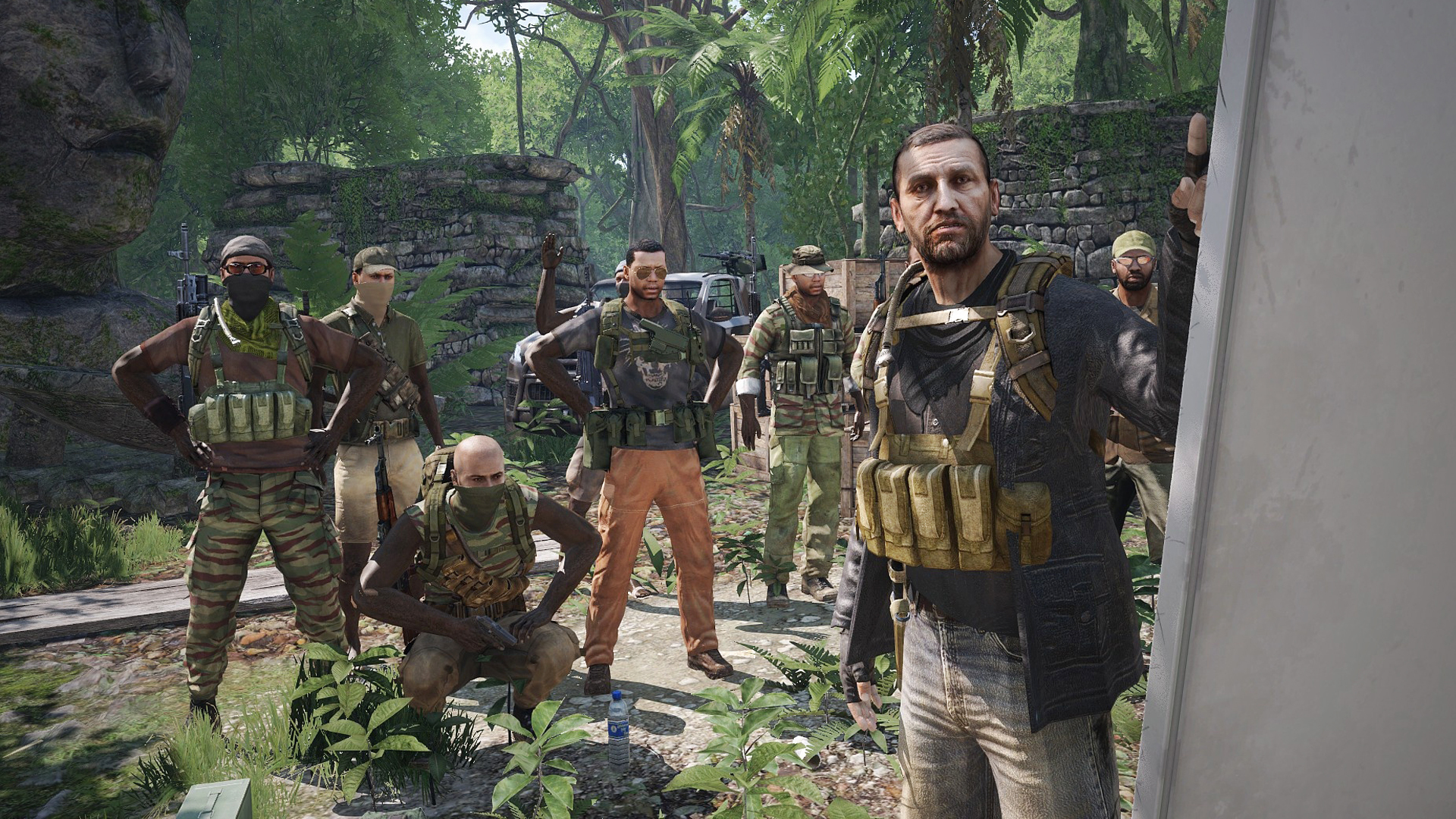 The Old Man scenario drops you into Tanoa’s 100 km2 tropical jungle island terrain with but a few instructions. It’s up to you to find your way around, obtain intel, weapons, and equipment, and decide on the best tactics to accomplish your objectives. While the scenario aims to offer an authentic experience, players do have access to a few convenience features, such as the option to wait and skip time, and the ability to fast travel between known safe houses. 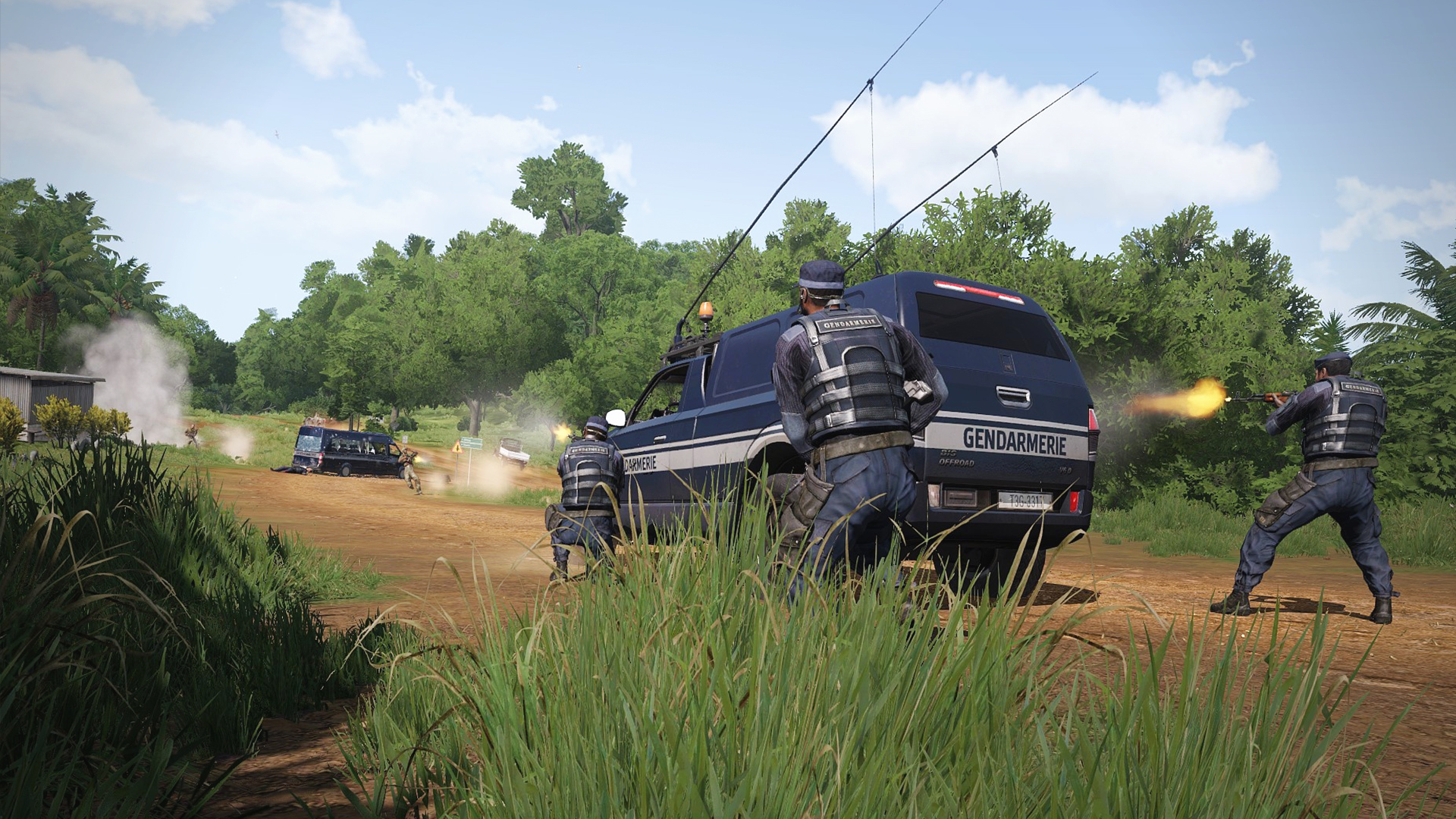 Besides the Old Man scenario itself, the [url=https://steamcommunity.com/sharedfiles/filedetails/?id=1938939381
]Workshop item[/url] adds a new static M2 .50 Caliber Machine Gun, as well as several new assets for Arma 3 content creators, such as a Tanoa CSAT reskin of the Zamak truck, a red beret, malaria-infected civilian characters, and various decals and inventory items. These extras will eventually be added to the Arma 3 base game via a free platform update. 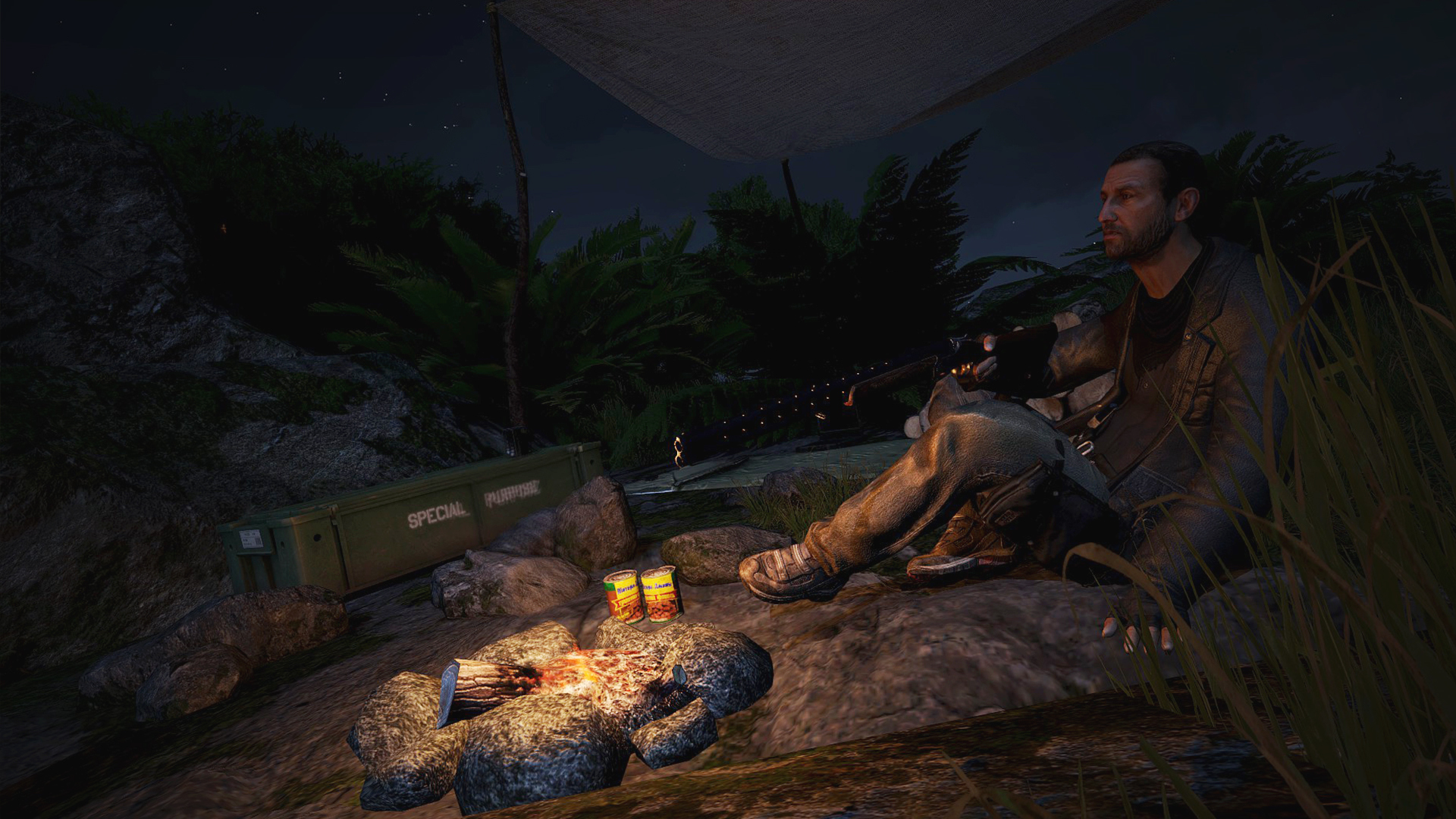 Due to its experimental nature, the Arma 3 Apex: Old Man beta is placed inside the Bohemia Incubator[incubator.bohemia.net]. This is a label for projects that Bohemia releases to the public in order to try out new design ideas and/or gain more experience in certain areas of game development. Depending on user feedback and available resources, the plan is to add the Old Man scenario to Arma 3 via a platform update in 2020. When that happens, people will still need to own the Arma 3 Apex expansion to play the scenario but no longer need to subscribe to the [url=https://steamcommunity.com/sharedfiles/filedetails/?id=1938939381
]Workshop item[/url].

The beta version of Arma 3 Apex: Old Man scenario is now available for download on the Arma 3 Steam Workshop (click here). Testers are requested to report game issues to the Arma 3 Feedback Tracker[feedback.bistudio.com], and post their feedback in the Workshop discussion section or the dedicated Bohemia forums thread[forums.bohemia.net].