Danger Crew is a single-player, retro-style RPG set in a world where programmers battle using laptops. Fire computer commands in Hack Battles until your enemies' laptops explode in a smoking cloud of defeat. Build your crew to be the most unstoppable programming team the world has ever seen.
$9.99
Visit the Store Page
Most popular community and official content for the past week.  (?)
Danger Crew Halloween Update
Oct 21, 2019 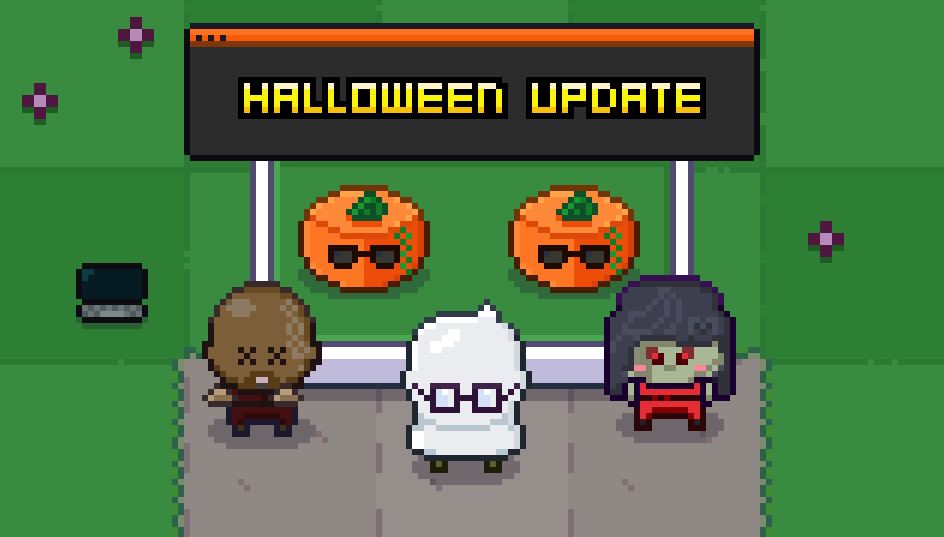 Hello, Danger Friends! We're back with another update to Danger Crew, your favorite RPG game about being a programmer at a belt company.

TWO NEW SPOOOKY SKINS!
Whether you want to Trick Or Treat through the office as a bedsheet ghost or those late night code reviews have turned you into a zombie, there's no spookier way to kick off your next play through of Danger Crew. These two new skins are only available for a limited time, so get them while you can!

NOW ON LINUX!
Thanks to the help and support from our friends around the Internet, Danger Crew's Linux version is ready and released today! We've updated our Store page to reflect the System Requirements.

Huge shoutout to our friend Lee B for testing the Linux version for us (and catching some other bugs!)

OSX Catalina
Here's a scary story for you - Apple released Catalina, the next major version of OSX. While this update is wreaking havoc on most of the Internet, we're pleased to report that Danger Crew is 100% compatible with Catalina. You brave souls that have updated to Catalina are totally fine to run this latest version.

In addition to the updates above, we've patched Danger Crew with minor content tweaks, hilarious grammar fixes, and slight changes to our versioning system.

If you have any trouble, please reach out to us via our website or the Steam Discussion Group.

Danger Crew
0
5
Replay Value?
As title suggests, I'd be interested in knowing if any factors in to increase replay value. One of my favorite things about the classic Pokemon games was travelling all around the land, with all Pokemon entails, beating the Elite Four, and then finding ne...
1

The Hacker King
We're kicking off the summer with a content update to Danger Crew! There's a new boss in town. He's tired of you slamming his Hacker henchmen around and is here to do business. You will find him hacking up a storm in the pathways throughout your adventure in Clayton.

Can you defeat the game developers?
Thought the action was over? Think again! Revisit the ending scene for one last rumble with Danger Crew developers Drew and Glenn. Defeating them will prove you truly are the best programmer Clayton has ever seen. 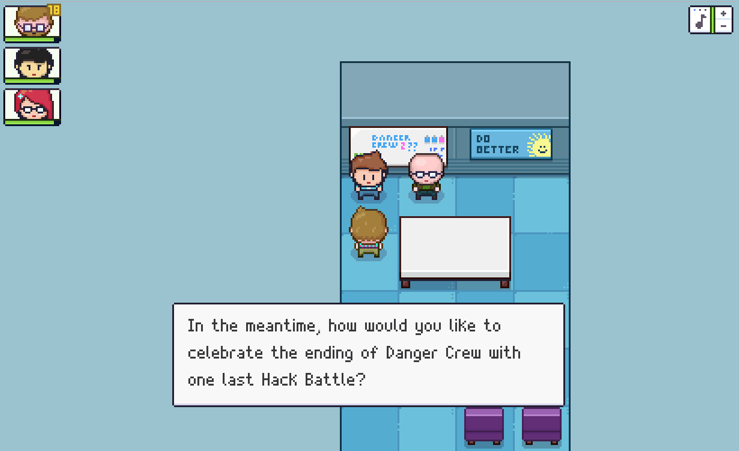 This update is available TODAY in Danger Crew. You'll know you're up to date if the title screen says version 0.6.13.2+.

We'll see you after the final battle!
- Drew & Glenn

Danger Crew
1
8
Early June Danger Crew updates
Jun 2, 2019
Wow... Danger Crew has almost been out for a whole month! We've been overwhelmed by all the players we've had - thanks so much to everybody who has checked out the game and given us great feedback. We take your feedback seriously! Here are some updates that are now available in Danger Crew:

More audio control: Several streamers have pointed out that our audio control increments were too big. There were only 5 slots before, but now there are 10! You now have much more granular control over the game's audio so you can get your levels just right for streaming.

Keyboard indicator: We added some on-screen icons during the HR Onboarding to encourage players to use their keyboards. The game is technically playable with only a mouse, but a keyboard or Steam controller feels way more natural.

Fewer menus in Battle: Scripts will now automatically deploy against single targets. If your chosen Script only has 1 valid targeting option, the menu will auto submit to save you a keypress. We've found this change speeds up the flow and lifecycle of battles.

More clear UI for Fury: The Fury status is fun because it triggers a comical response when a furious character is targeted, even by a teammate! That bit of nuance caught a lot of players off guard, so we added a warning indicator when you're able to target a furious friend. Watch out, this guy will smack you with recoil if you use an item on him... but it might be worth it!

Faster XP Bar: The XP gain can be a little slow and repetitive to wait through after every single battle, so you can now speed it up by pressing the Action key. This helps get you back into the world activities faster.

Better XP Visibility: Speaking of XP, you can now see your XP in the form of a progress bar at the bottom of the Pause menu. It's now way more clear how close you are to the next level.

You'll know your copy of Danger Crew is up to date if the version number in the top right of the title screen says "0.6.2.1" or higher.

There's more on the way!
We have a few new content pieces and big announcements planned for later in the month. More updates will be ready soon.

Thanks for reading - and thanks as always for helping us make Danger Crew better and better.

Danger Crew
0
2
Taking Screenshots Doesn't Work
Hi, I just checked out the Steam store page. It doesn't have any screenshots. So I decided to take one. Turns out I can't. For some reason, pressing the key combo to bring up the Steam overlay, or to take a screenshot, doesn't work. They work for Hollow...
2

NightBlade
Nov 18, 2019 @ 8:28am
Bugs & Troubleshooting
Bug when saving
Sometimes after battles when it tries to auto save i receive an error for writing in a locked save file and then when i try to load a save it doesn't load and ends up crashing
6

Bl4ckC4t
Jun 18, 2019 @ 7:24am
Bugs & Troubleshooting
Scripts and Upgrades Question
Does anybody know whether the Copy/Paste script will work with the Item Ninja upgrade?
2

null;
Sep 25, 2019 @ 6:51am
General Discussions
This game was a real inspiration!
This game really got my game development inspiration to maximum! The story and the gameplay is pretty boss!
4

Recommended
11.0 hrs on record
This game is like a banana hook: it doesn't look like a big deal but it makes life worth living.