Store Page
Show
All News
All News
Syndicated News
Official Announcements
Developer Q&A Stream - October 8th
Sep 21
On October 8th, Nimble Neuron's very own will be hosting two (2) Q&A sessions, with questions asked by YOU!
We'll be opening two discussion threads on Steam for you to post your questions.

- When threads will be open to post questions -
September 28th, 6PM PST - September 29th, 8AM PST

The streams will take place only on our Steam Store.

Please not that the threads are closed and will be open at the designated time.

Eternal Return: Black Survival
12
0
Account Suspensions - Week of 9.20-9.25
Sep 24
The following accounts have been absolutely confirmed and have been temporarily or permanently suspended due to violations of our Terms of Service:


Currently you can report players through the specific channels we have on Discord or through our Support platform here: https://eternalreturn.zendesk.com/hc/en-us/requests/new

We are in the process of implementing better and more efficient ways to address teaming, inactivity, stalking, and even attempts to use illegal programs.

We will do our best to improve this and make sure that these issues do not ruin the fun and unique experiences we want you to have in Eternal Return.
If your account has been suspended and you would like to appeal your case, please contact us through:
https://www.playeternalreturn.com/support
Use the Issue Category: Ban

Come September 30th, you'll no longer be able to purchase the pack and receive some really cool rewards like:

Don't miss your chance at this deal!

* If you've bought the pack previously, you'll still be able to redeem the characters and benefits even after the discontinuation of the pack

Buying the Founder pack provides you with 8 characters, but some of you had already unlocked some of them prior to purchasing the pack. In order to ease any feeling of unfairness, we have been refunding all the duplicate characters.

The refunds were given as NP, the game's premium currency, which made some feel like Founder's that received refunds had actually received more benefits than Founders that didn't get any refunds. Since our many of our "long-term" Founders had bought the pack before the closed Beta had begun, we were able to give them their rewards immediately, meaning very few of them asked for refunds.

We didn't foresee the refund system being abused - we should have set a fair refund policy from the beginning. It didn't seem fair for earlier Founders to get less benefits, so we'd like to apologize for this.

We've discussed how to solve this so that all the Founders who've trusted us could get the same benefits, and we have decided to also provide NP to Founders who couldn't get a refund.

We will work hard so that our incredible Founders do not regret supporting us or feel slighted, and continue to bring you the best version of Eternal Return possible.
Thank you.

Eternal Return: Black Survival
12
0
September 25th Founder Pack distribution delayed
Sep 24
On September 25th (KST), we will not be able to process refunds or send Founder Pack rewards due to some of our internal systems being temporarily offline for maintenance.

We apologize for the inconvenience. Rewards and refunds will be processed the following Monday.

We received a lot of feedback about ending the Open Beta; we’d love to allow everyone to play more, so we’ve decided to extend the Open Beta for a bit longer.

Open Beta has been extended until October 11th, 11 PM PST.

As a part of the Game Festival, we will be hosting two developer Q&A streams on October 8th (3 AM PST for the Korean stream and 8 PM PST for the English stream). Following Steam guidelines, we will be conducting the Q&A as follows:

Eternal Return: Black Survival
16
0
Patch Notes - 0.16.5 (2020.9.23)
Sep 22
System
Updating the matchmaking process and the display of dropped items.
Character
Spotlight - Hyunwoo
Hyunwoo has reigned at the top of the win rate list but has had, by far, the lowest kill count. He had raw strength, but Hyunwoo's tactical play/macro game was..monotonous.
Instead of nerfing Hyunwoo's passive and adjusting his items, we’d like to try to adjust both his normal attacks and skills to allow more aggressive and confrontational gameplay styles.
Fiora
The Graceful Fencer has no problem sticking to players, so she’ll take a small nerf to her mobility. We don’t want to destroy her early game, so we’re first lowering her team mode strength..
Hart
Hyejin
Hyejin's fear doubled with the Bow weapon skill (Rain of Arrows) was a little too synergetic.
Isol
Isol's early game needed some love, so we’ve touched his base stats a bit. Also adjusted the skills so Semtex Bomb (Q) can be used without Rebel Assault (W) more often.
Jackie
Li Dailin
Even after a slight decrease following the last patch, Li Dailin still has one of the highest pick rates. We’re looking at her early game through Spirited Kick (Q). An early weapon and three consecutive kicks can HURT.
Magnus
The duration of the movement speed reduction on Broken Bullet (Q) was way long compared to other skills. We’re also trying to lower Magnus's CC abilities with the Bat weapon skill(Full Swing), especially in Squad mode.
Sissela
The Incurable Patient is a very good teammate.

Xiukai
Little more love for Solo Xiukai but making sure the Juggernaut Chef isn’t oppressive in team modes where he already shines.

Yuki
Zahir
Weapon
Increased some melee weapon attack ranges to help smooth out movement and attacks. Also some other adjustments.
Glove
Tonfa
Two-handed Sword
Rapier
Dual Swords
Spear
Bat
Sniper Rifle
Assault Rifle
Pistol
Throw
Bow
Crossbow
Shuriken
Armor
There’s synergy between HP and Defense, but there hasn’t been a lot of HP equipment. We’ve added HP to some items -- mainly chest armor.
Balance between strengths and weaknesses is a very important element of the game, but it’s unhealthy for them to be too influential. We’ve downgraded or replaced normal attack damage reduction and skill damage reduction, which could all but nullify specific opponents.
Head
Chest
Arm
Leg
Accessory
Bug fixes
Thanks to everyone who reports these bugs, we couldn’t have done it without all your tenacious work!

Eternal Return: Black Survival
14
0
End of Despair (Founder) Pack refund adjustment
Sep 22
Starting now, we will only refunding up to 2 characters in NP if you have purchased the End of Despair Pack after unlocking the characters.

If you purchased the pack and bought characters in the pack with A-Coin, you will be eligible for 2 of those characters to be refunded in NP.

If you have purchased the characters, and later decided to support us by buying the End of Despair pack, you can also receive a refund for up to 2 characters in NP.

The pack is being sold at a very discounted price compared to its real price out of respect for our fans and players willing to support the project. After some possible cases of abuse, we decided to limit it to only 2 characters per transaction.

The two character refund is an approximate estimation to how much our backers are investing in the pack.

For information on how to purchase the End of Despair pack, visit https://eternalreturn.nimbleneuron.rocks/

For information on how to claim your pack, visit https://discord.gg/94CaNHt

To request your refund from the End of Despair pack, message us via Zendesk, https://eternalreturn.zendesk.com/hc/en-us/requests/new

Here is the last ranking of players from the tournament finals and their score:


The top 3 players will receive the respective prizes:

In the meantime, you can check some twitch highlights of the finalists:

We are extending the Duo Weekly Matches for this week. (1 more before the end of the Beta)
September 24th 7pm PDT

The GM will be sharing a code on the channel. Make sure to have a duo partner ready to join.

Have fun this week and remember that we will continue with the Beta until the 30th.

Survive until the end!

We will now proceed with the Finals.

Finals
The Finals will happen on September 19th 7pm PDT

It will be played in NA Server / Solo Mode

There will be amazing prizes for this tournament:

Finalists
These are the players who made it to the Finals:

Where to watch:
The following players will be streaming their games in this Finals:


If you did not make it to this tournament, do not fall into despair!
We will be bringing more fun activities like this soon

Add Eternal Return to your wishlist
Wishlisting us on Steam is ridiculously helpful for us. Please wishlist us and recommend us to your friends so we can continue to try to make the best possible game for everyone to enjoy.

Eternal Return: Black Survival
10
0
[New Character] Adriana Concept Art!
Sep 17
So I found the owner of the gem thing. It belongs to none other than the hottest girl on Lumia Island, Adriana. I think she must've been in the parking lot stealing the gas from my car... 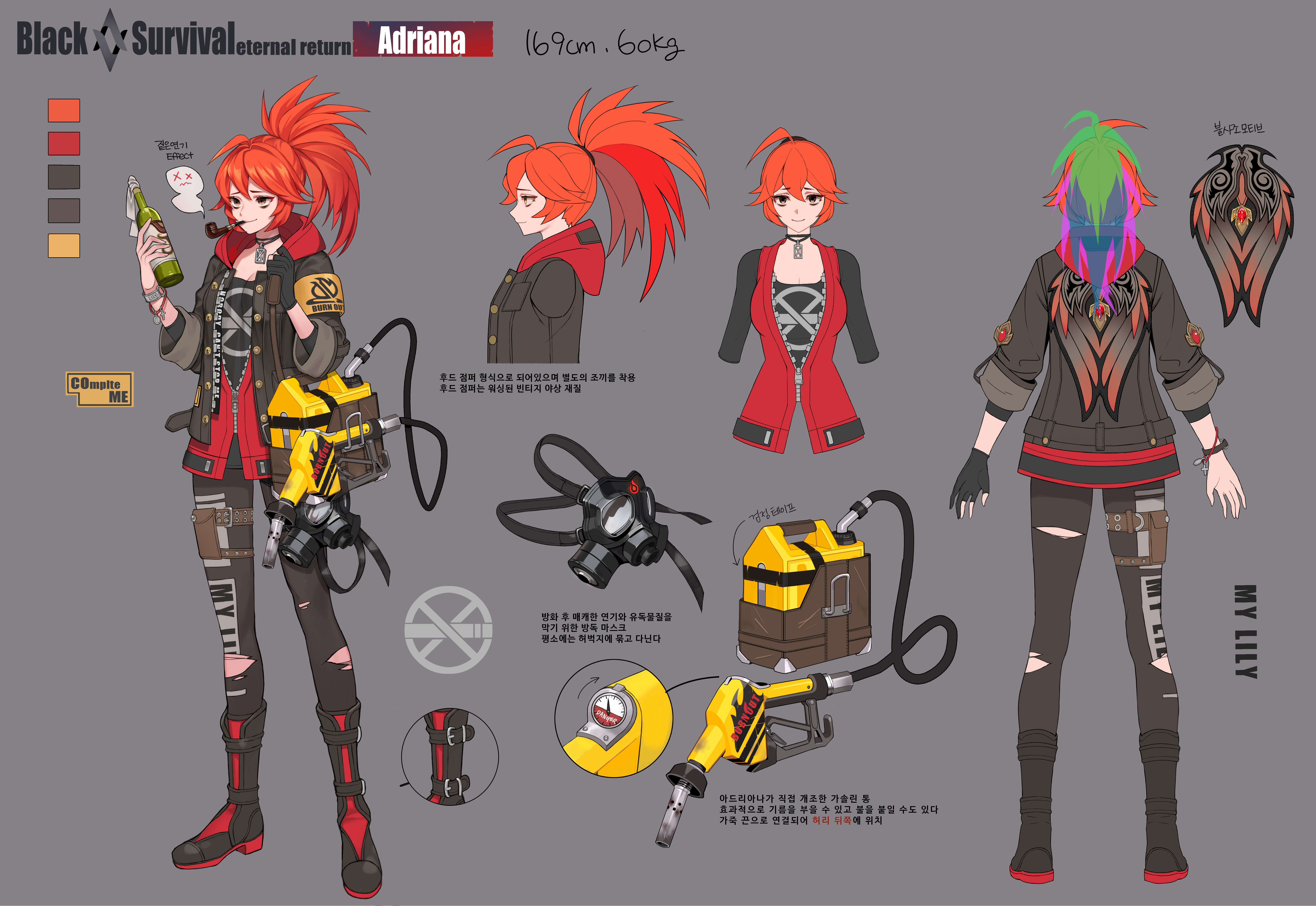 Adriana, the Inferno, will turn up the heat on Lumia Island sometime during Early Access. She’s got her flamethrower on her hip, likely ready to fry up the other test subjects. She hasn’t, nor will she ever, forget about her sister - she’s even got a reminder on her (rather torn up) pants!

There’s more Adriana to come! Pop in to the Official Discord[discord.gg] so you don’t miss a thing.